For the price, these new Ryzen processors offer great rendering performance - while also providing the best single threaded speeds for modeling, animation, and other related tasks. Each model in the 5000 Series family is 10-20% faster in V-Ray Next than the corresponding model from the 3000 Series.

However, AMD's Threadripper processors are still the kings of single-socket rendering. It is also worth considering whether a GPU rendering engine, or a hybrid that uses both the CPU and GPUs, could fit in your workflow. Those can scale much higher in performance within a single workstation. 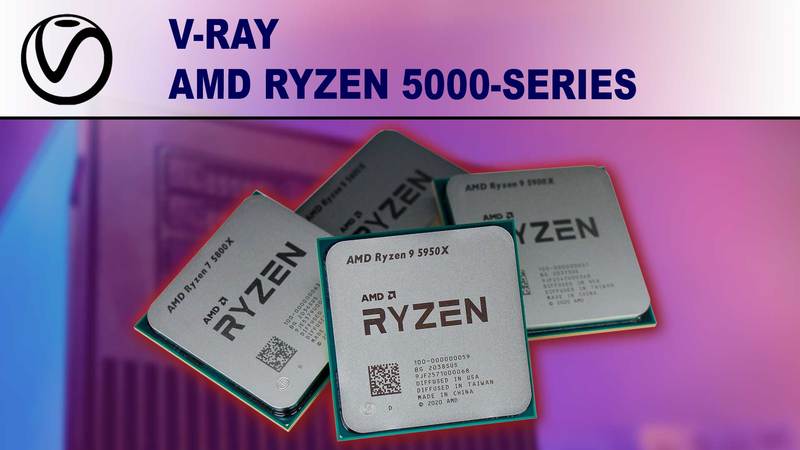 For this article, we are looking at how the new AMD Ryzen 5000 Series processors compare to a host of other currently-available models: AMD's previous Ryzen 3000 Series, their high-end desktop (HEDT) Threadrippers, and both Intel's mainstream Core and HEDT Core X lines. The focus here is on CPU-based ray-tracing performance in Chaos Group's V-Ray and V-Ray Next rendering engines. Public benchmarks available for both of those, and more info about how we use them is available in the Test Methodology section.

*Pre-launch BIOS only has AGESA 1.0.8, but AMD says AGESA 1.1.0 should come soon - which may further improve performance

The V-Ray Next Benchmark measures system performance using both the CPU and GPU rendering pipelines. We aren't concerned with GPU performance in this article, so results depending exclusively on video cards have been omitted. However, in V-Ray Next the CPU can contribute to performance even in the GPU-based renderer - so to judge how these processors compare in that situation, we have included the CPU's contribution to that score (after removing the GPU's portion). We also still use the previous version of V-Ray Benchmark as an additional comparison point, but again exclude the GPU side of things.

Results are listed from fastest to slowest (top to bottom), and split across multiple charts in the following gallery.

The results shown above reflect AMD's claims of improved per-core performance. Each of the new Ryzen 5000 Series processors is roughly 20% faster than the 3000 Series equivalent in V-Ray Next's CPU mode, with a more variable 10-20% boost in V-Ray Next's GPU mode and the older V-Ray CPU benchmark. Since the core count is the same between these generations, performance per core is the primary factor in this boost. That probably comes from the combination of a few things: slightly higher clock speeds, increased performance per clock, and improvements to the way that the cache is structured internally. Regardless of the root causes, though, the impact is substantial: up to a 20% gain in rendering speed within a single product cycle, and for only $50 higher MSRP.

When comparing to Intel's processors instead, the previous 3000 Series was on roughly equal footing with Intel per core - but now, AMD is far ahead. The difference is especially noticeable with Intel's Core X series, which cost substantially more than the Ryzen chips but do not come close in performance.

On the other side, if you look at AMD's higher core count Threadripper chips you can see that they are still a better choice for this type of rendering - purely due to having many more cores. They also cost a lot more, of course, so performance per dollar may be better with Ryzen but if you want the fastest CPU rendering (without going to a costly multi-CPU box) then Threadripper is still the way to go.

Are AMD's Ryzen 5000 Series Processors Good for Rendering in V-Ray?

For the price, these new Ryzen processors offer great rendering performance - while also providing the best single threaded speeds for modeling, animation, and other related tasks. However, AMD's Threadripper processors are still the kings of single-CPU rendering.