Skip to content
Always look at the date when you read an article. Some of the content in this article is most likely out of date, as it was written on July 27, 2020. For newer information, see our more recent articles.

AMD's new Ryzen "XT" processors and Intel's new Core i9 10850K are so close in performance to the original models that there should be no perceptible difference in real-world usage. Our advice, for each pair of chips, is to get whichever is more affordable and readily available.

None of these are the best or fastest CPUs for rendering, though: that honor goes to AMD's Threadripper 3rd Gen lineup. 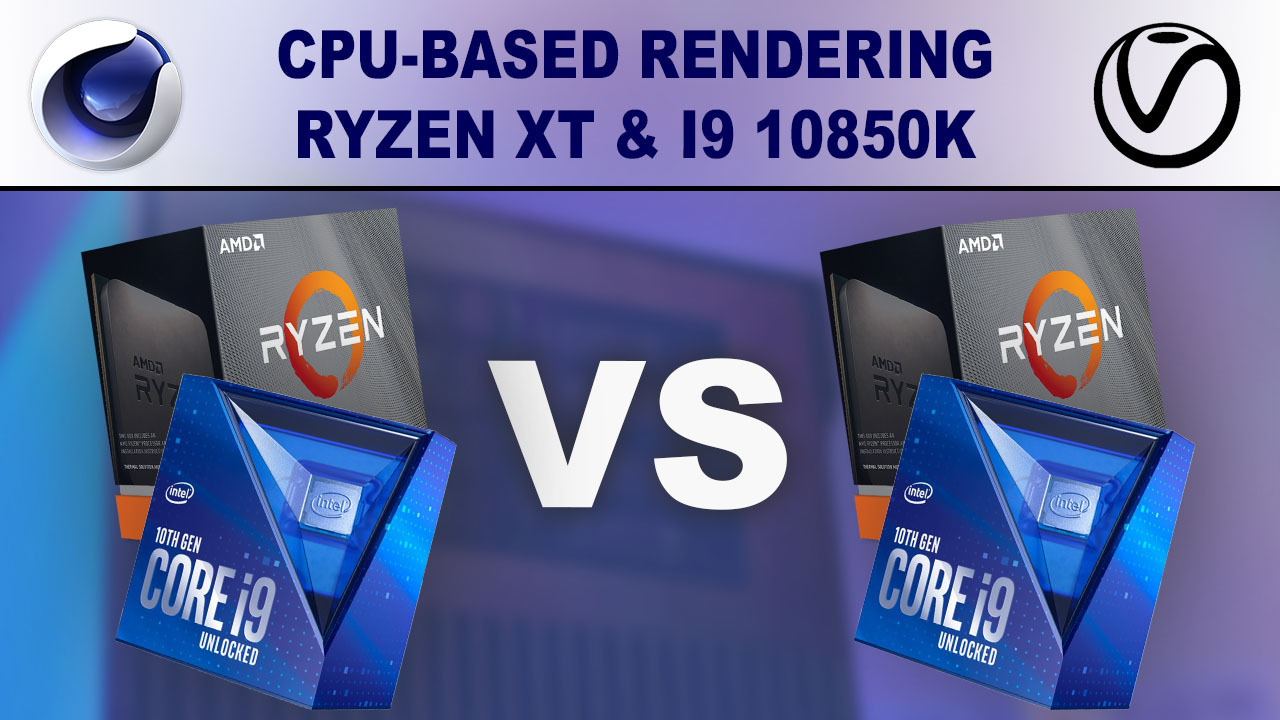 Most CPU launches include a lot of rumors, leaks, and fanfare – with reviewers rushing to get content out, system integrators updating their product lines, and enthusiasts doing everything they can to get their hands on one of the new models. The latest processors from AMD and Intel, however, lack almost all of that.

Rather than a new product generation, what we are getting this time around is a handful of very minor updates. From AMD, the new Ryzen 3600XT, 3800XT, and 3900XT are a small step up from the existing "X" models – but as far as the specs go, the only real difference is a 100-200MHz increase in the Max Boost Clock. In theory that could boost performance by as much as 2-4%.

On the other side, Intel actually released a slightly slower model – presumably to help alleviate some of the supply issues with the Core i9 10900K. The new Core i9 10850K is essentially the same as the 10900K, only with 100MHz lower base and Maximum Turbo Boost clock speeds. This should translate to around a 2-3% drop in performance, at least in theory.

The question is: does this tiny difference in clock speed even matter? While certainly important, the frequency (either base or Boost/Turbo) is just one factor in what determines the real-world performance of a processor. To answer that question, within the context of CPU-based rendering, we have run all of these chips through multiple rendering benchmarks.

*All the latest drivers, OS updates, BIOS, and firmware applied as of July 20th, 2020

In order to see how each of these CPUs perform in CPU-based rendering applications, we ran the following tests:

Each benchmark was run twice per CPU, and the faster of the two results is included below. That method does slightly complicate things with the Intel processors, though, as these new 10th Gen Core models have multiple power limits which can substantially impact performance. This isn't completely new, but it is more pronounced with this generation of processors… and it leads to short-term boosts in performance when a processor first gets under load which then drops off after a while. As such, the first run of each benchmark test on the 10900K and 10850K scored substantially higher than their second runs. If anything, this may make those Intel processors look better than they should when compared to AMD's models – because in longer workloads (which would include most real-life rendering situations) most of the processing time would be spent at the lower power limits and thus enjoy reduced performance. I may cover this topic in more depth in a later blog post, but I wanted to make sure readers were at least made aware of it here.

We'll start off with the results for Cinebench, which tests the rendering of a single scene in Cinema 4D's built-in engine: 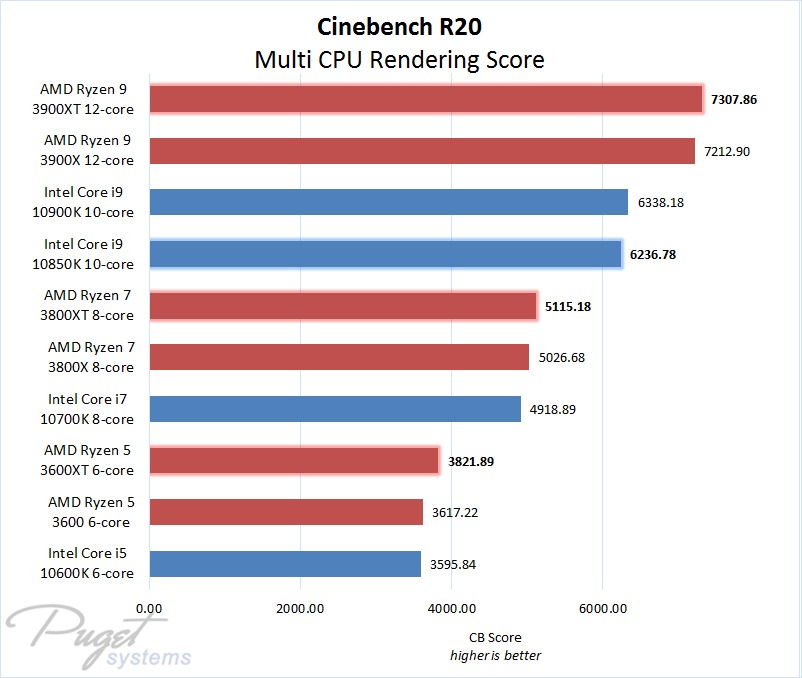 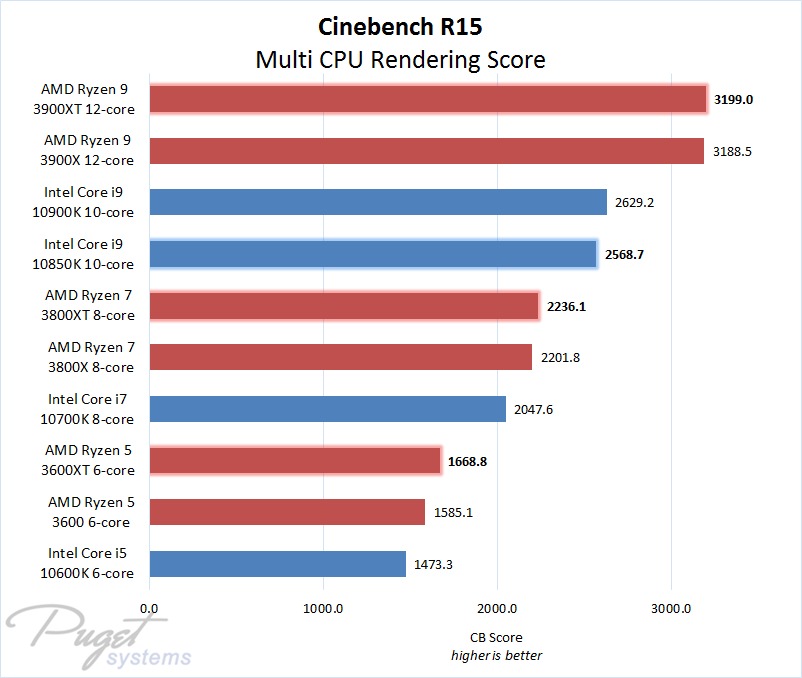 And similarly, here are the charts showing results for the various V-Ray and V-Ray Next benchmark tests: 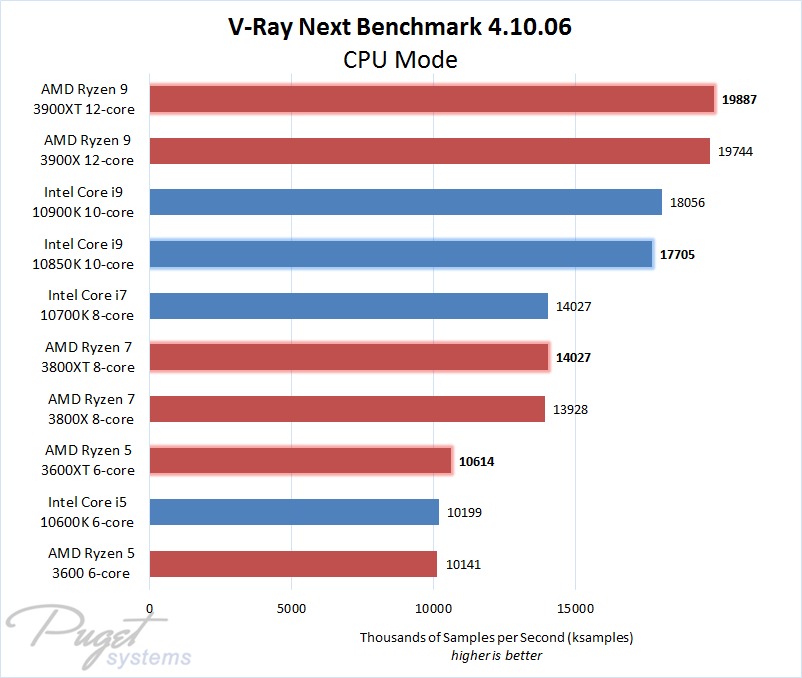 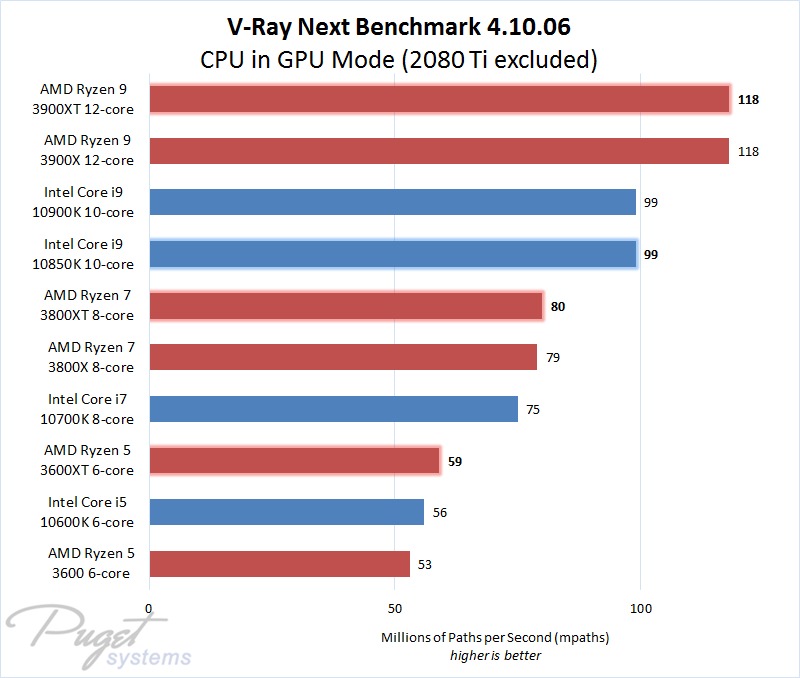 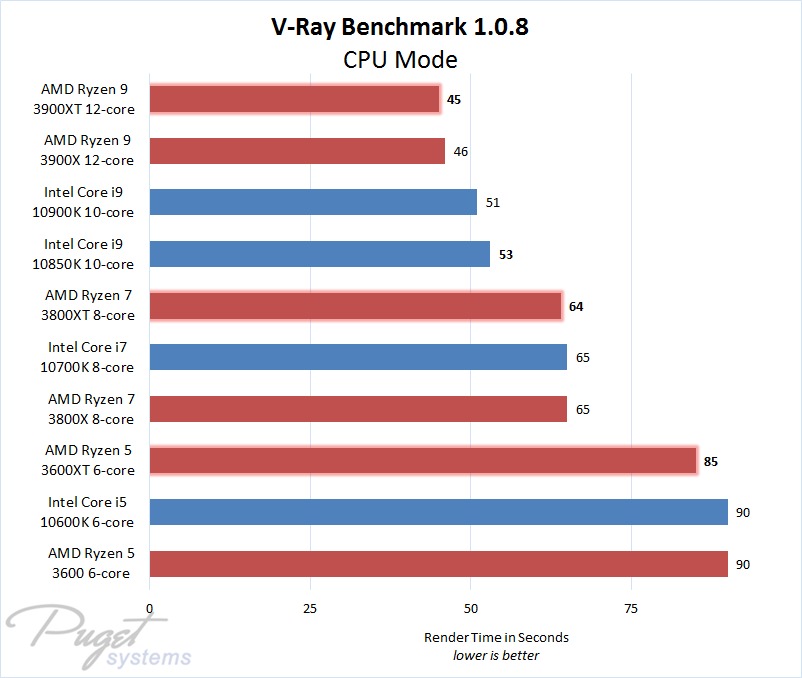 AMD's new Ryzen "XT" processors and Intel's new Core i9 10850K are so close in performance to the original models that there should be no perceptible difference in real-world usage. Our advice, for each pair of chips, is to get whichever is more affordable and readily available. None of these are the best or fastest CPUs for rendering, though: that honor goes to AMD's Threadripper 3rd Gen lineup.

Given that the AMD Ryzen "XT" models only have a small 100-200MHz increase in maximum Boost frequency compared to the "X" models, we didn't expect to see much of an increase in performance… and we were right. Across all of our rendering benchmarks, the 3900XT and 3800XT only performed 1-2% faster than the previous 3900X and 3800X models, respectively.

If you can get these new XT versions for the same price as the older X models, then great – but if not, the fractional difference in performance is probably not worth paying more for. It is also worth noting, if you are building your own system, that the new XT models do not include a CPU cooler (not that I'd advise using the stock AMD coolers, personally, but this difference could impact those looking to build on a budget).

Supply of the Intel Core i9 10900K processors is very limited, which is partly why Intel launched the Core i9 10850K in the first place, so if you are considering purchasing or building a new system with either of these CPUs we recommend going with whichever one you can get your hands on. You are unlikely to notice the small difference in real-world usage, so there no reason to hold out for one or the other unless the savings available from the 10850K is enough to alter what other specs you can afford.