I was doing some system testing on a nicely configured dual Intel Xeon node using the optimized Linpack benchmark1 from the Intel MKL2 (Math Kernel Library) and was really impressed with the performance numbers I was seeing. I had a couple of new Haswell systems set up so decided to run the same benchmark code on those too. I was stunned by the performance of the Haswell processors! I tested a few other systems and found that Haswell gives about a 70% speedup over Ivy Bridge at the same core clock speed. I was surprised by that because what I was hearing about Haswell was that it was generally only about 10% (or less) faster than Ivy Bridge. It looks like the new AVX23 instructions on Haswell are really effective.

On Intel hardware the numerical routines in the MKL library are highly optimized to take full advantage of every bit of performance you can get out of the hardware and most of the algorithms are SMP parallel using OpenMP4 threads. Running the linpack benchmark included with MKL will give you a good idea of what your system is really capable of as far as numerical computing goes. It also gives you good motivation for making use of those library routines in you own code when you can, since a lot of the heavy performance optimization is already done for you.


If you are the type of person who knows what GFLOPS5 means, and cares about it, then look at those numbers again and realize what you are seeing. Your heart rate should be a bit higher now. OK, OK, I know there is a big difference between a dual E5 Xeon compute node and a desktop Core i7 machine but, hey, you can run some serious compute jobs on a simple Core i7 desktop system with 32GB of RAM and a nifty SSD!

If you suffer from "number blindness" and prefer a chart, here you go; 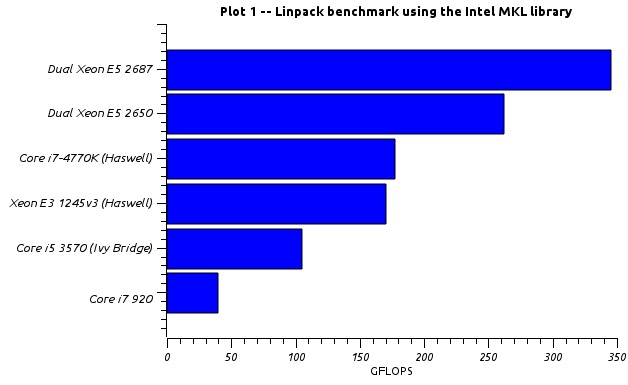 The really impressive feature of these performance numbers is the implied performance per core. Just dividing the GFLOPS by the number of cores in a system is NOT a good way to judge per core performance but it does convey the pulse quickening information that I referred to earlier. For the actual thread scalling performace see table 2 below. 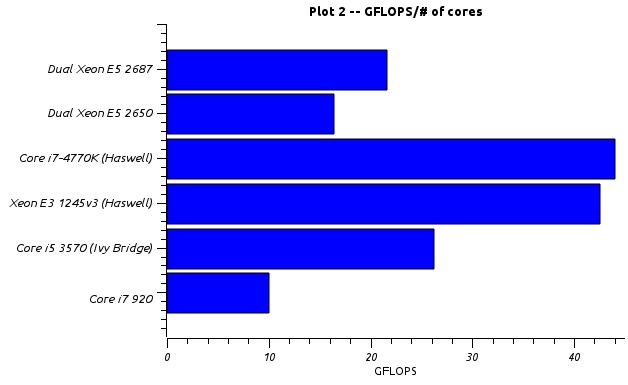 I was so impressed with the performance of the Core i7 4770 that I bought one for myself! I built a new home system to replace my aging (vintage 2008) Core i7 920 system (system number 6 in table 1)

To round out these numbers, and confuse you more, (these are benchmarks after all!) I've Included another table showing the parallel scaling on the Xeon E5 2650 system and my new system with a "non-K" Core i7 4770 (I wanted VT-d capability which the "K" "over clocker" processors don't have).

The new Haswell processors have some serious floating point capability with the new AVX2 instructions ... if you have code that can exploit it!

1 The Linpack benchmark is basically solving a system of linear equations by tri-diagonalization using Gaussian elimination. It's a common type of problem you see in numerical computing and it scales well thus making it a popular, and meaningful benchmark (in my opinion). Wikipedia has a good article on it.

3AVX (Advanced Vector Extensions) and, SSE (Streaming SIMD Extensions) before that, provides a nice SIMD (Single Instruction Multi Data) vector unit to x86 processors. You can get a significant speed up in programs that are optimized to take advantage of it. Wikipedia has a good page on AVX

6 Intel® Turbo Boost Technology I think of it as automatic, load dependent, over-clocking.