Signs of a turning economy?

If you're connected with me on Twitter or Facebook, you probably have noticed my recent posts about how great business has been, and how we've been more and more busy these past months. It has been a great feeling to once again focus my efforts on expanding our capacity to meet demand. But why have our sales picked up so heavily in the last quarter? Is this due to a gain in market share, or is this something bigger? I don't claim to have the answers, but I would like to go over the data and our theories.

To start, I'd like to do something that's pretty rare for a private business to do these days, and show you a graph of our monthly sales over the last few years. I do this because I just can't resist -- it is uncanny how closely the timing and trends mimic the greater USA economy. 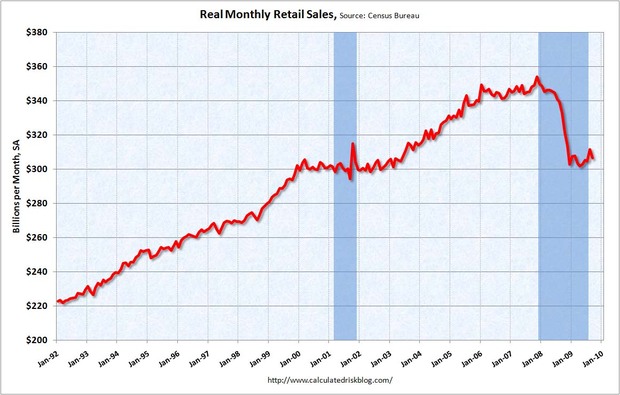 While it is hard to identify trends in the short term, when you step back and look at years of data, it is amazing how consistent it is. The left side of the graph above shows the slow and steady growth that is the hallmark of our business model -- that we've seen very consistently since the day we opened our doors in 2000. We have occasional peaks and valleys, but the trends are clear. You can also see that we saw the first impacts of a receding economy at the beginning of 2008.

What's interesting to me is how well this timing lines up to data from the US census bureau. The graph to the left shows what has been happening with the USA retail market over the last few years. You can clearly see the drop starting in January 2008, and the improvement over the last few months. You can find a number of other interesting graphs at the CalculatedRISK Blog, which all tell the same story.

The biggest questions on my mind as I ponder this data is: why did we do relatively well through the recession, and why have our sales turned around at such an accelerated pace, compared to the greater US economy?


Myth #1: the upswing is due to Windows 7. I'm not denying that it has played a role, but it isn't enough to explain the graphs above. Windows 7 did not come out until October 2009. Even if you consider the upgrade coupons bundled with Windows Vista, it is just too late to explain the improvement. We offered our own upgrade program in March 2009, and MS offered theirs in June 2009. And yet our sales started seeing significant improvements in January 2009.

Myth #2: this is a normal pattern as we approach Christmas. Ignoring the fact that sales began to improve in January 2009, we also simply have never seen such a dramatic surge in business around the holidays. We do see a Christmas rush, yes, but what we're seeing now is an entire order of magnitude larger.

So what is causing this recent surge in business? Yes, we have run successful advertising campaigns, and we're receiving a series of great reviews and publications. But the truth is, this growth out paces that. When it comes to advertising and growth, we take the "slow and steady" approach, and the last 6 months is no exception. We have absolutely been working hard, but we also have been talking to other companies in our industry, and to our vendors and manufacturers, and what we hear is that our experiences are typical of the greater industry. It's the whole industry! So what do I think?

Theory #1: smaller boutique builders are gaining market share. This would be consistent with the recent reports that Dell is currently seeing a big drop in income, while we and others in our industry are seeing growth. It would also explain why our distribution partners are seeing business improve as well (because Dell and other big box stores source their parts straight from the manufacturer).

Theory #2: the boutique computer industry is on the leading edge of an improving US economy. This theory is rooted in the belief that consumers have been "making do" with what they have. Heaven forbid you keep a tech junkie from the newest hardware! As funds start to become available again to consumers, we could be seeing a spring-back effect, in that the pent-up demand for updated computer systems is now starting to be met.


What do you think? Any way you slice it, it looks like we have a great 2010 ahead for our part of the computer industry! Is it also a good sign for the greater economy?