When we began development of our Echo PC, we quickly saw how NIVIDA ION would bring a new life to home theater PCs. The small form factor, low power draw, and near-silent operation are the perfect makings for a computer in the living room. As more content is put online, the PC is fast becoming a cheap alternative for home entertainment. But the strength of NVIDIA ION lies in the GPU, and applications that take advantage of GPU acceleration are anything but mature. In our testing, we found that ION was extremely well suited for DVD/BLU-RAY playback, and for Netflix. But Hulu — the final piece in the trio of current online entertainment — was not ready. Fullscreen playback was not acceptable on ION. We knew that NVIDIA and Adobe were working together on the problem. We waited. 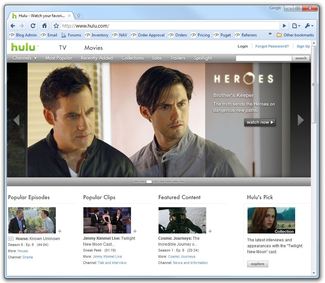 The problem with Hulu was in the scaling of the video content. The actual decoding of the stream seemed to be within ION’s capacity, as evidenced by the fact that video played without problem in windowed mode. When taken full screen, the video became choppy and unwatchable. It was the scaling of the video that was the problem. The scaling was not being handled by the GPU, and the meager Atom CPU was not up to the task. This week, Adobe launched the beta of their new Flash version 10.1. This version adds full GPU acceleration, and I am happy to say, solves the performance problem!

This is a big deal. This is all I have been waiting for before I ditch my Tivo’s (and their monthly service fees) and put an Echo PC on each of my home TV’s. The Echo PC is quieter than a Tivo, uses less power, and is far more flexible. With a HDHomeRun network HDTV tuner, and Echo PC’s on each of my TV’s, I now have full access to live TV, internet or network content, podcasts, DVD/BLU-RAY titles, Netflix, Hulu, and any other content I want that is available to a PC.

The one piece of home theater that is yet outside the grasp of our Echo PC is encrypted cable HDTV channels. But this won’t be for long — we have some exciting things coming in 2010.

Myself, I am ready to take the dive and make the PC the primary device in my home theater. The guys at HDNation agree! What about you? What entertainment sources are important to you, and are any of them not yet accessible by PC?