This is the first edition in a series of (hopefully) weekly blog posts titled "Puget Picks". Our goal is to shine a spotlight on some hardware that we've been recently impressed with.

There's a lot more to any particular piece of hardware than it's polygon-crunching output, so I want to stay away from a bunch of bean-counting benchmarks (there's plenty of great sites out there that do a terrific job at that). Instead, I'd like to focus on the hardware from the various perspectives of our departments, and what sort of experiences they've had.

This week, I wanted to start by featuring the Intel X25 series Solid State Disk (SSD). We've been selling them for since November 2008, which is a pretty long shelf-life for any computer part.  To start, I hit up the sales department to see what they had to say. Our ever-mysterious sales rep, Jeff, gave me this list of 5 bullet-points which set the Intel X25 series SSD apart from the rest:

1. It's small in size – doesn't take up a lot of room or block airflow. Our systems are increasingly complex these days, and the added airflow space inside a computer chassis can often be a big deal for the cooling performance. 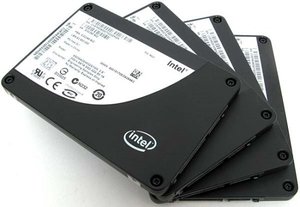 2. It's very fast! The well-documented performance of these SSDs is their major selling point.

3. It runs cool and quiet. In our quietest systems, the hard drive is often the noisiest part of a computer. These SSDs are the perfect solution.

4. It draws less power than traditional drives. Whether you're a gamer pushing the limits of your 750w power supply, or just trying to save on your power bill – the low power consumption of these drives is a big plus.

5. They are lighter than traditional drives, and are more shock resistant too. This is a particularly big deal for notebook computers.

I also solicited some thoughts from Daniel, our lead support technician, and here's what he had to say:

"Intel has a great history of offering robust microcontrollers. The Intel Microcontroller on the X25 series of drives is no exception. Compared to competing drives such as the OCZ and Crucial offerings, the Intel has had fewer problems. In addition, the few major problems the Intel drives have encountered have only been relevant for people who are either using the disk's data encryption features (very few), or who are updating their drive's firmware (which we don't recommend).

The Intel X25-M series has become the benchmark by which other SSDs speed and reliability are measured. These drives are the default choice for people who are wary of early adoption and who understand how important it is to have a robust microcontroller in today's SSDs." 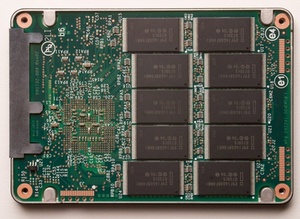 Even though Intel's X25-M series has been on the market for going on 2 years now, it's still competitive with the newest drives in terms of real-world desktop performance.Finally, I went to the back and asked our build team if they had anything else to offer.  John offered his thoughts. The list he offered up was very similar to Jeff and Daniel: Good performance, low power draw, high reliability, etc.  He also had this point:

"It has 'Trim Support', which is basically for wear levelling. The general idea is that you don't end up writing over certain portions of the disk multiple times while others aren't used, so you get even wear over the entirety of the drive, which lengthens it's life."

Speaking of lengthy life, we carefully track the failure rates on hardware that we sell. Since 2008, we've sold 484 of these x25 series drives, and had a total of 3 fail in the field. I'd be hard pressed to find a part that we carry with a better failure rate.  So, Puget gives some Kudos to the Intel X25 series SSD's. They're more expensive than traditional hard drives, but there's a lot here to justify that price. Good work Intel, keep it up!