A quick explanation for people unfamiliar with Linux:  Linux is an operating system, much like Windows or MacOS.  It's been around forever, it has a lot of different varieties, and it's really good at doing certain things.  One of the things that it's not been particularly good at, historically speaking, is playing games.

In recent days, we've seen more and more movement on the Linux Gaming front.  TransGaming has done a terrific job with their Cedega product of bringing games to the Linux platform.  MNTHGECC9VB9 Even more exciting for Linux users, we're starting to see some developers gearing up to launch their product on all three platforms simultaneously (such as Heroes of Newerth).  Now that Valve's Steam is available on MacOS, there's even a lot of belief that a Linux release might be next.

So what does a gaming system for Linux look like?  Two of our support technicians, Daniel and Christopher, both run Linux on their personal desktop systems, so I thought I'd challenge them each to design a Linux gaming rig.  I also threw in a catch:  Keep the price under $999.

Both of the guys came up with excellent configurations for that price point, and each took a different approach.  Christopher went with an AMD platform and a faster video card, while Daniel's configuration is using an Intel processor which has a lot more upgrade potential in the future. 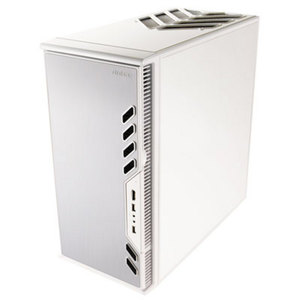 I went with an M4A785TD-M EVO motherboard, as it's a pretty solid, reasonably inexpensive AMD option.  Trying to keep the costs down, I've worked with an AMD CPU for this build, as Intel tends to be a little more costly.  The Athlon II X2 245 offers a pretty solid clock, and compares favorably to some of its quad-core brethren.

One thing I have made sure to stay away from is an ATI video card.  While I love my ATI card in Windows, the driver support on Linux is less than desirable, and I'd like to have an easier time getting good performance. As such, I've settled for a Zotac GeForce GTS 250 1GB.  This should give plenty of performance, and while it's not a massive powerhouse, it'll play just about anything available.

A Corsair 650W power supply is great.  It's actually overkill, but leaves room for future upgrade potential.  In addition, we've had better reliability with it over its 450W counterpart.

If I have one thing I'm disappointed with in my build, it's the lack of RAM – I've got 2GB of 1333MHz Kingston ValueRAM in the configuration, which is barely enough for a decent gaming experience.  In most gaming machines, I'd expect to run at least 4GB of RAM.  That said, since we're gaming in Linux, I'm less worried about a loss of performance due to OS overhead, so I feel justified in dropping it.

Finally, for the distribution of Linux, I'm personally fond of CrunchBang Linux, as the snappy OpenBox based distribution has an interface I feel more comfortable with.  However, for ease of use and general support, Ubuntu is the current Linux king on the desktop, so I've gone with that for this build. 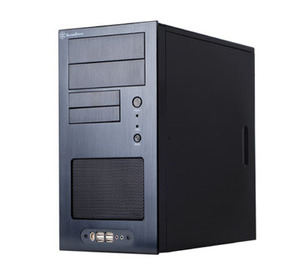 I started with the P7P55-M motherboard because I like the Micro ATX platform. One of the things that technological progression gets us is smaller components. It sometimes amazes me how many people are still using full-size ATX boards for no good reason when they could move to a much smaller Micro ATX board and have a much smaller machine that fits on their desk and can be easily moved. Another key here is the Intel P55 chipset. It supports the Core i3, i5, and i7 chips so it's very upgradeable. It also lacks the integrated graphics that the H55 and H57 chipsets include, so you're not spending the extra money on that when you're not going to use it in a gaming machine anyway.

I went with the Radeon 5670 because it's the best graphics card I could get while keeping within the price limit specified and spending enough on other components to make a well-rounded machine. The 5670 will run many games just fine, and even the newest games as long as you're okay with decreasing graphical detail and running a relatively low resolution. (Maybe a 19" widescreen at 1440×900, or a 22" widescreen at 1680×1050 if you don't care about the very latest games.) A point of comparison here, the Nintendo Wii only supports 480p maximum, which is approximately equivalent to a 854×480 resolution. Many Xbox 360 titles only run at a maximum of 720p which is about 1280×720.

In my opinion, the Silverstone TJ08 is the most aesthetically pleasing PC chassis we sell, bar-none.  It's is very small compared to most of our other offerings, so it should be less obtrusive on your desk.

The Western Digital Caviar Black series of hard drives are among the fastest mainstream hard drives. Of course SSDs and even Western Digital's own 'Velociraptor' series are faster, but the prices on those put them out of reach for this build.  Finally, I've only put 2GB of RAM on this machine, unfortunately the price limit didn't allow for much more. That said, in my experience, Ubuntu 10.04 is much more forgiving of a RAM shortage than Windows 7 would be.

What do you think?  Since Linux is free and Windows 7 Pro runs about $150, there's certainly an appeal for Linux-based desktop gaming systems.  If more and more games are launched and supported by Linux, do you think more gamers will consider it as a way to get more gaming bang for their buck?  With Steam available on MacOS, is Windows going to lose it's stranglehold on the gaming market?  Share your thoughts in the comments section!