Last week Microsoft announced sales of Windows 8 licenses have reached 40 million. They provided few details other than adding that most of those were upgrades and that Windows 8 was selling at a faster clip than Windows 7 did three years ago. Of course, this comes several weeks after Microsoft CEO, Steve Ballmer, told a French newspaper that sales of their new Surface tablet, running Windows 8 RT, have gotten off to a “modest” start.

A number of PC builders have chimed in on whether sales of Windows 8 systems have met their expectations. Jeff Barney, VP and general manager of Toshiba America admitted that his company has “different” expectations for Windows 8 because it arrives after the well-received Windows 7 into a market with plenty of alternative options. David Chang, CFO for Asus, said sales of Windows 8 notebooks have been sluggish. “Demand for Windows 8 is not that good right now”, he told the Wall Street Journal.

Even Paul Thurrott, who runs the popular SuperSite for Windows, quoted a “trusted source at Microsoft” that sales of Windows 8 have performed “well below Microsoft’s internal projections”.

So it wouldn’t be a stretch to say opinions vary widely concerning the sales figures and future of Windows 8.

This got us thinking about how many Windows 8 systems we’ve sold compared to those running Windows 7. Keep in mind that as a custom PC shop, our customers dictate sales trends. Unlike some of our competitors, we didn’t stop offering Windows 7 when Windows 8 arrived.

We began offering Windows 8 across our product line the day it become available. The graph below illustrates low but steady adoption of Windows 8. The lack of substantial spike in initial Windows 8 sales shows that our customers are are reluctant to wade into the waters of Microsoft’s newest operating system. 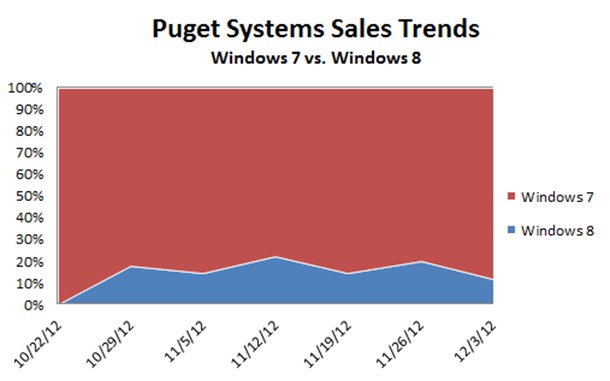 Windows 8 arrives to a PC market of mostly satisfied Windows 7 customers. The conditions under which Windows 7 arrived differed as many Windows XP users had held off moving to Windows Vista due to lackluster reviews and various hardware compatibility issues. Although most were resolved, many users held off buying a new PC until Windows 7 became available. That pent up demand manifested itself in people lining up to buy Windows 7 the day it was released.

We haven’t witnessed the same level of excitement or demand for Windows 8. The removal of the START menu is a deal breaker for many. Some have taken a “wait for Service Pack 1” approach while others plan to stick with Windows 7 even when purchasing a new PC.

In our experience with Windows 8, we haven’t been able to point to a predominant feature that convinces Windows 7 users to upgrade to Windows 8. That doesn’t take away from the fact that Windows 8 includes a number of new features and system tweaks. For example, Windows 8 boots and shuts down faster than Windows 7. This feature alone might make it attractive to laptop users.

Hidden underneath a maze of live tiles, Windows 8 performs much like Windows 7. But those unfamiliar tiles and lack of START menu have been enough to push buyers back into the familiar lap of Windows 7. As touch displays become more affordable, we may see more interest in Windows 8. But it’s still very early to predict how sales will transpire over the next few months.

As you know, we tailor each new computer we build to the needs of our customers. That means offering a choice in operating systems that include Ubuntu Linux in addition to both Windows 7 and 8. As a smaller custom PC builder we aren’t beholden to spiffs or monetary incentives that would line our pockets for pushing our customers towards  certain products. That's just not our style.

At Puget Systems we plan to sell Windows 7 alongside Windows 8 for as long as Microsoft will commit to sell and support it.