As a sales representative at Puget Systems, I’m often asked by customers considering a new PC if they should have us install Windows 7 or the new Windows 8 operating system. When I began running Windows 8 a few months ago, I kept a running list of features I enjoyed along with a few I found perplexing. Over time, my list has grown and contracted, but a few items on each side of the coin have remained.

One of my coworkers has already put together a helpful list of new features while another helps you decide if Windows 8 is right for you. I’m going to take a different approach by sharing my Windows 8 experience with those of you whom I don’t get to speak or email with each day.

Windows 8 is fast! I can’t really explain it either, but it feels as though someone shot my PC full of performance enhancing drugs and disappeared into the woods. I have no benchmarks to back it up, but I don’t care because how a PC feels is personal. Microsoft touts faster boot and shut down times which I’ve noticed as well. But even navigating around my system, copying/moving files, and basic multi-tasking feels faster in Windows 8 than Windows 7.

At home, I have three computers connected to a home network. I use my primary Widows 8 PC to share out three printers along with gigs worth of pictures, videos and music. To manage this I created a Homegroup that makes sharing files and printers among all three a cinch. A few issues I had with printers disconnecting from my Windows 7 Homegroup have disappeared since moving to Windows 8.  As more of our music and video consumption moves to streaming services such as Netflix and Spotify, this becomes less of an issue. But until then Homegroup helps keep me from going Office Space on my printers.

Think of the Metro (It’s actually called Windows 8 style, but I’m sticking with Metro) side of Windows 8 as a start menu that’s undergone more plastic surgery than the Kardashians, and looks nothing like you remember. Tapping the WINDOWS key brings up Metro where you’ll find access to programs and various live tiles that provide quick access to weather, sports scores and stocks to name a few. With the desktop a click away, I found Metro to be far less controversial in use than what I’d read about in reviews. If you haven’t been a WINDOWS key user, you will be now.

One note: Avoid installing so-called START menu replacement utilities. I’ve tried a few and found them as useful and attractive as slapping a turbo charger and hood scoop to my minivan would be. If you absolutely can’t live without the START menu, then stick with Windows 7. 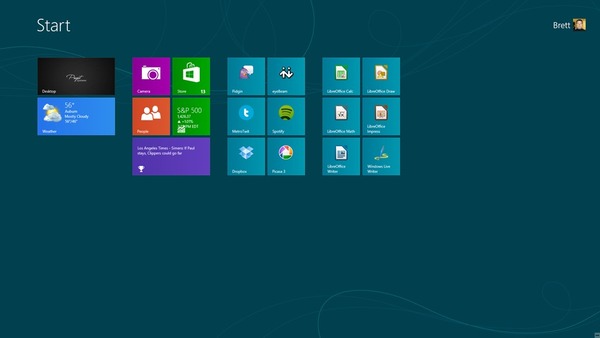 I’ve configured Metro to show only those programs I use often.

Moving back and forth between Metro and the Desktop was a jarring transition for a few weeks. If you run your browser in full screen mode it may take less getting used to, but the notion of every app going full-screen may feel odd at first. Navigating around Metro also takes a while to figure out. I still hit the ESC key occasionally expecting  it to minimize Metro apps which. In practice, the ESC key has no function while in Metro. But set aside some time to learn a handful of keyboard shortcuts and you’ll be fine.

Windows 8 allows me to customize a number of areas including the START and LOCK screen, but I wish it would allow me to hide certain icons from the ALL APPS screen, which can become a clutter of icons I’ll never use. 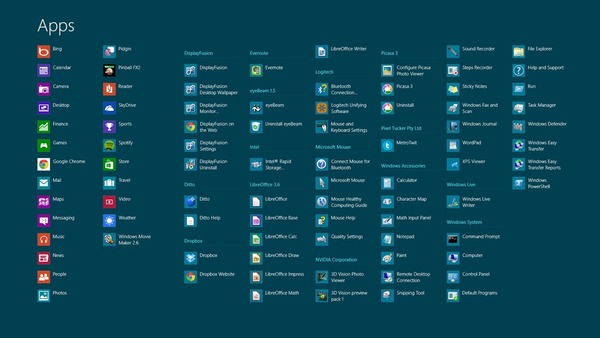 Metro apps to left are neat and orderly.  Desktop apps on the right not so much.

I still find it odd that updates to Windows and Metro apps are performed independently from another. At the very least, I’d expect to to find them in the same location which isn’t the case. Metro app updates are initiated from the STORE tile which seems like an odd place to go looking for updates.

I don’t understand why there’s one version of Internet Explorer for Metro and another one for the desktop. Which version launches depends on from where the link initiates. You may also want to fiddle with your file associations so that clicking a PDF from the desktop doesn’t immediately take you into Metro’s PDF reader. For a new users this can be a very confusing experience, and honestly, new users should not have to worry about file associations in order to restore a sense of familiar order.

Dual monitor support is improved but I still needed to buy Display Fusion Pro in order to minimize programs to their respective taskbar. Display Fusion includes a number of other features, but that one taskbar feature is worth $25 to me.

Windows 8 is a product that shouldn’t be judged over a short period of time. The security of the START button is gone, replaced by the in-your-face Metro, and that’s going to startle many users who may immediately return to Windows 7. But that would be a mistake, because Windows 8 is very good product and shows that Microsoft can put together competent back to back version of Windows.

I was a big fan of Windows 7 and its simple, clean presentation. It didn’t come with the learning curve of Windows 8. And if you’re happy with Windows 7 on your PC and don’t like change, I recommend sticking with Windows 7.

But if you want to get a taste of where Microsoft is taking Windows across all platforms, I recommend giving Windows 8 a try. It’s a fast, modern operating system, and that’s enough to keep it running my primary PC here at work and home.