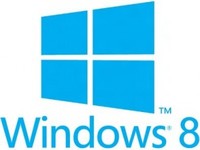 Windows 8 launches this fall, on October 26th to be precise, and it is shaping up to be the most controversial Windows edition ever. Past versions like Vista and Millennium Edition were underwhelming, certainly, and others like Windows 95 and XP changed the face of Windows dramatically – but each new version has generally been an attempt to improve the user experience. Some focused on better performance, others on a newer and sleeker interface… and while there were both successes and failures Microsoft has managed to maintain dominance in the PC operating system market.

The latest version of Windows, however, has a lot more to it than just a shiny new taskbar or updated applications: it represents a shift in the whole interface from a traditionally mouse-centered approach to a touch-centric design. The last time that Microsoft tried to add an interface option to Windows was Media Center, which was introduced part-way through the life-cycle of Windows XP and brought a ‘ten foot’ interface designed for use in a living room. That was simply an added interface option on top of the normal Windows UI, though, while Windows 8 has completely removed large parts of the traditional interface that PC users have become accustomed to.

I am speaking, primarily, of the Start Menu – which has been the foundation of the Windows experience for the last 17 years. It is completely gone in Windows 8, replaced by a tiled start interface the likes of which were first seen with Windows Phone 7. Some tiles represent ‘normal’ desktop applications, and one is a shortcut to the traditional desktop itself, but most of the default tiles are new Windows 8 apps which open within the tiled interface. This new user interface is built in front of the traditional desktop, but is clearly the focus of Microsoft’s current design direction. It is also built from the ground-up for a touch screen, which makes sense given its heritage. 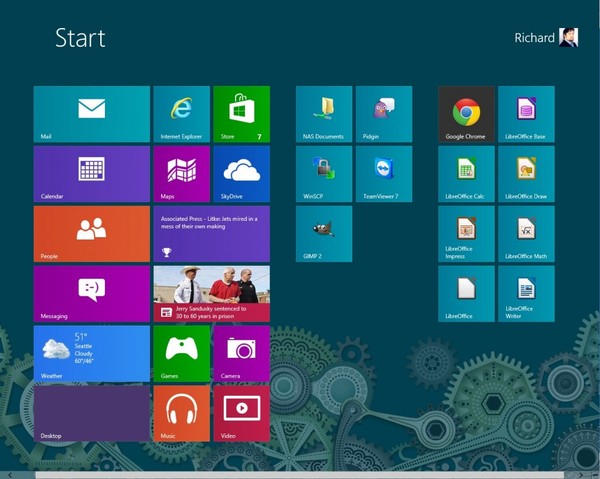 The tiles are large, to facilitate easy interaction with large fingers even on small screens, but on a large desktop monitor it looks decidedly out of place. If you right-click on a tile to remove it, change it, etc then the menu that results opens at the very bottom of the screen – where it would be easy to move a finger to, but it feels odd to have to move a mouse cursor so far between related commands.

In fact, that is a trend that shows itself throughout Windows 8: almost anything you want to do with the user interface itself takes more clicks and often a longer distance for the cursor to travel than it did in Windows 7. Shutting down, for example, used to be two or three clicks in previous versions – but now requires hovering in a corner, three clicks, and a fair amount of movement between each. There are new keyboard shortcuts for many things, which is great for those who memorize them or keep them handy on a printed chart – but I suspect that most Windows users have gotten accustomed to using the mouse primarily with the keyboard exclusively for text input. If this describes you, Windows 8 is probably *not* in your best interest.

Now it isn't all bad: multi-monitor support at the desktop level – once the tile interface is out of the way – is improved. The taskbar now shows up on all monitors, and there are options to have applications show on just the monitor they are active on or on all of them. There are also updated versions of Task Manager, Windows Explorer, and even the file transfer interaction box got a nice face-lift. If you are a power user, who likes keyboard shortcuts and multiple monitors – and most importantly, who doesn't mind getting used to some new things – then Windows 8 may well be a fine upgrade for you.

Where Windows 8 really shines, though, is on the touch screens for which it was built. My wife has a Windows 7 tablet PC at home, and I have played around with the Windows 8 Release Candidate on it – and almost every aspect of use was improved. The on-screen keyboard is better, the tile interface feels more natural, the full-screen apps actually make sense (whereas they are extremely cumbersome on a desktop), and the less demanding graphics used by the interface help make it feel faster.

On a desktop with a dedicated video card the graphics in Windows 8 seem like a step down, and that is one of the things I miss the most about how Windows 8 looks compared to 7 (or even Vista), but it makes sense when you consider the target market of tablet computers and cheap all-in-one systems doesn't have high performance graphics chips. Between that and the changes to the interface to take it away from being oriented toward desktop use I think I will be holding off on upgrading my home desktop… but I am using Windows 8 at work because I have dual monitors, and I will very likely upgrade to the full version on my wife’s tablet as well.

Another aspect of the tile interface which is interesting to note is that the same style is shared by the latest update to the XBox gaming platform, as well as the upcoming Windows Phone 8. This may well mean that apps could also be built to provide a similar experience on each device, which could draw developers to platforms which have so far seen limited consumer interest (like Windows Phone). At the very least, it means that someone who is accustomed to one will be able to easily understand and use the others. 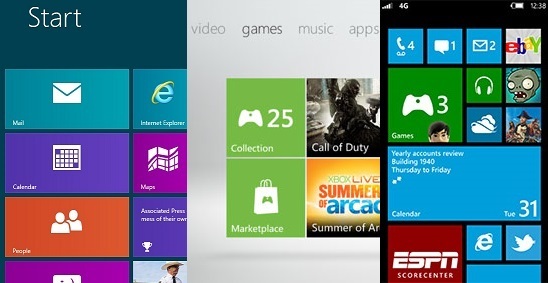 Windows 8 also allows – and in fact, encourages – you to sign in with a Windows Live ID. This enables syncing of settings across different Windows 8 computers, and could be expanded to integrate features from Windows Phone 8 or the next XBox too. Time will tell how well Microsoft does with bringing these different elements together, and whether the combined ecosystem gains traction in the market.

To sum up, here are my recommendations:

– For computers built around a touch screen: Windows 8 is amazing! If someone is new to PCs, learning to use Windows 8 may actually be easier than previous versions, though only when using the touch interface it was designed for.

– For users who have both a PC and an XBox or Windows Phone: the potential for integration and a similar user interface or even shared apps across those devices may be very appealing.

– For power users, especially those with multiple monitors and who like to use keyboard shortcuts: Windows 8 is a strong upgrade option, definitely the way to go on new computers and possibly even worth moving to on existing hardware.

– For normal desktop users, who are most comfortable with using a mouse to control things: Windows 8 may be a challenge to get used to, and there is nothing compelling enough about it to make me recommend an upgrade on existing computers.

For those who really prefer to avoid change as much as possible, rest assured that we will also carry Windows 7 for quite a while. We have been able to offer Windows XP well past when it was discontinued as a stand-alone option – thanks entirely to Microsoft’s Downgrade Program. There is no word yet as to whether that will continue to be an option, but if it is then we will likely provide Windows 7 as an option upon request similar to our approach with XP today.