MechWarrior Online (often shortened to MWO) is an upcoming "free to play" action simulator, the latest game in the well known MechWarrior series which is in turn based on the BattleTech tabletop game and novels. For those familiar with the franchise the setting is going to put you right at home: you are a MechWarrior, piloting a 20-100 ton bipedal war machine called a BattleMech. The graphics and controls are greatly updated from previous games, the last of which was published more than a decade ago, but the core game-play is very similar.

The main difference from past games is that they tended to be single player, story-driven games – which had small, tacked-on multi-player game modes. MechWarrior Online lives up to its name in that it is all about online multi-player battles – there is no single player option, and no specific story line. Instead, the game is set within the BattleTech universe at a specific point in the established history. Time in the game's setting is progressing in a 1:1 fashion with the real world: each day there are news announcements pertaining to events going on in the fictional future time period, and eventually this will be integrated into a meta-game where territory is actively fought over by players. That all has yet to be implemented, but should be a huge draw for both competitive gamers / groups and long-time BattleTech fans when it arrives.

For now, while the game is still in closed beta, the focus is on getting mechs, weapons, the in-game economy, and matchmaking all balanced properly – and then getting as much content in as well. The core game-play is nearly complete, with only a few more specialized bits of equipment still to be added. There are nine mechs in the game so far, with another seven announced – and plans to keep them coming on a regular basis even once the game officially launches. Each mech also has two to five variants, which each look slightly different and have various weapon placement options. Maps are going to be added continually as well, with four in the game now and two more promised before the end of the year. The maps so far vary greatly in size and setting: from a desolate city, torn apart by war, to a scorching, smoke-filled volcanic caldera. Variants on each map are also planned, to keep pilots on their toes and make each match feel unique.

Mechs come in four size classes: light mechs from 20-35 tons, medium mechs from 40-55 tons, heavy mechs from 60 to 75 tons, and assault mechs from 80 to 100 tons. I've always favored the biggest mechs in past games, and in MWO it is no different. I pilot the Atlas, a 100 ton death machine with no equal in terms of the firepower it can carry. The trade-off is speed and agility: it moves slowly, and can't turn as quickly as the lighter mechs to deal with close or fast-moving threats. That is how this game is balanced: while my mech may have more firepower and armor, a good pilot in a light mech could pick me apart slowly without getting hit much, or spot me for long-range missile mechs – effectively the artillery of this game. Because of the different advantages each mech has, you really want to have a mixed group of mechs with you in battle. Communication is also key: playing in a group with voice chat, even if you don't know the people well, will give you vastly better chances of winning thanks to the ability to quickly share info and organize during the changing tides of battle. 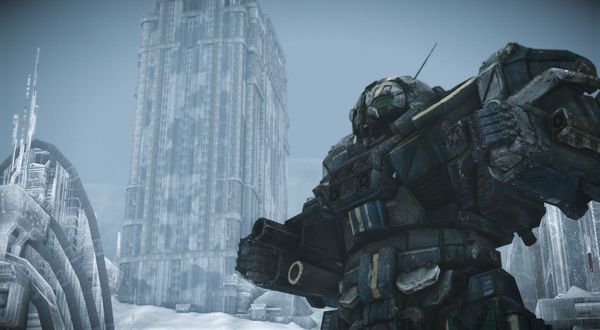 One of my favorite aspects of the MechWarrior series has always been the MechLab – where you can go to customize your mechs to suit your specific style of combat. MWO does not disappoint here, with an interface that stays true to the table top game while enforcing some additional limitations to give each mech and variant a different style. You can change around weapons, armor, engines (which affect speed and turning), heatsinks (which help keep your mech cool and allow you to keep firing longer), and other equipment. Some mechs can mount jump jets, for example, which let you move to higher ground more quickly and allow access to some places that would otherwise be unreachable – like the top of a building. Weapon placement is also a big factor: weapons in arms can be aimed faster, but are then in locations more easily destroyed by opponents. All of the decisions you make about what to do with your mech have to be balanced against the tonnage it can support, space available to mount equipment, hardpoints where you can attach weapons, and of course C-Bills (the in-game currency). 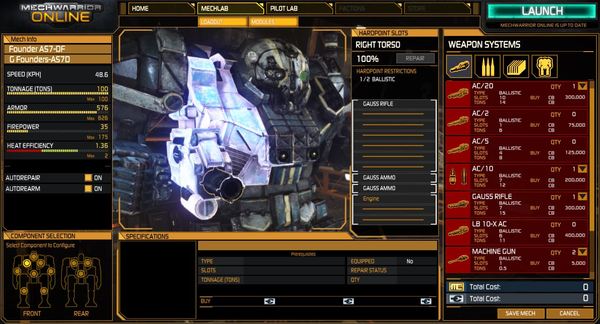 I first heard about MWO when it was announced late in 2011, and have been signed up on their forums since the day after they opened. I purchased a Founders Pack – a way to support the development of the game – and started to realize from the system requirements that had been announced that I was going to need a hardware upgrade. While waiting for beta access I upgraded my home gaming rig to a Core i5 3550 processor. Moving up to that quad-core processor from my previous dual-core vastly improved gaming performance in general, and allowed me to hit the ground running when I got beta access in July. Since then I also upgraded my video card to the GeForce GTX 660 Ti, which roughly doubled performance again. I now get a very smooth 50-60fps consistently in MWO, though that may change as the graphics are going to be updated as the game approaches open beta.

If you want to get in on the action, you can buy a Founders Pack and get immediate access to the closed beta. You can also apply for the closed beta, which is like playing a lottery with relatively decent odds of entry, or simply wait a few more weeks for open beta to arrive. All of these options, and lots more information, are available on the MechWarrior Online website.