Intel launched a new processor in their Core X series recently, and it is novel in many ways. It combines a fairly high core count with very high clock speeds, at the cost of power consumption and high heat output. It also is very limited in availability, being offered only to select system integrators via a private auction. We got our hands on one in the first auction, and have been putting it through several rounds of benchmarking to see if it is worth the price and hassle, as well as to determine if we will be offering it in our workstations. 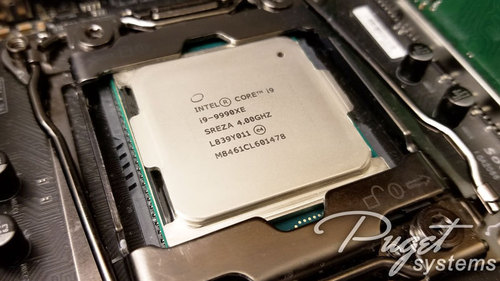 Here are the basic specifications for this new chip, the Intel Core i9 9990XE:

From the raw numbers, this should be a very powerful processor - but how does it perform in some common benchmarks? Lets see:

Those Cinebench scores put this chip on par with the Core i9 9900K for single-core speed as well as the i9 9980XE for multi-threaded calculations. V-Ray is also well threaded, and again this result is very close to the 9980XE's 37 seconds. That is quite a feat, though these tests are short enough that they don't really show if the chip can sustain that level of performance for a significant length of time.

LINPACK takes longer, and looking at clock speeds during its run we did see a dip on most of the cores after several seconds. I am not yet sure if that was thermal or power throttling, or if it was due to LINPACK's use of AVX512 which often causes CPUs to run at lower clock speeds. Either way, the 9990XE's 975 GFLOP/s is still slightly faster than Intel's other 14-core chips like the Core i9 9940X.

Does the Core i9 9990XE's very good performance in synthetic benchmarks translate to real-world applications? Yes! It behaves very much like the best parts of the high clock speed i9 9900K as well as the high core count i9 9980XE, and takes home top or near-top performance in most of the tests we put it through. You can see more details on the individual software articles we published:

Or if you don't want to dig deeper into a specific application, you can flip through the gallery of performance graphs below:

With all of that, it might seem like the new Core i9 9990XE is a logical addition to our product line - but it isn't that simple. While performance is solid, there are many other factors to consider before we start using a component in our workstations. Unfortunately, this processor has many downsides:

Given all of those concerns, the small gains made by the Core i9 9990XE do not seem to justify the risks. We will continue to test this processor and monitor the auctions, but for now we do not believe that offering it would be in the best interests of our customers.