Dassault Systèmes recently updated SOLIDWORKS 2019 with its first service pack, SP1, and we did a roundup of Intel CPUs looking at how they perform in this popular engineering application. We found that both core count and clock speed play a role different aspects of SOLIDWORKS performance, so when Intel released their new Core i9 9990XE with very high clock speeds and a respectable number of cores this seemed like a good application to try on it - even though the i9 9990XE has issues that prevent it from fitting in our product line.

To see how this new processor performs in SOLIDWORKS 2019, we used the following configurations:

Each test was run three times on each CPU, with the fastest (lowest time) of the three used for this article. We didn't have any significant outlier results and saw very little variance between runs, so we opted for this method over an average of scores. The results are broken up into their own graphs below, and followed by our analysis and conclusion. Those graphs are further divided into two galleries, the first focusing on parts of SOLIDWORKS which are mostly single-threaded and the second looking at workloads which are more multi-threaded. You can scroll through the results using the left and right arrow icons or simply click on the thumbnails below.

It is worth noting that we also tested assembly rotation performance across these CPUs, but didn't bother presenting graphs because they all performed within a fairly close spread - with no more than about 10% difference across various files and different view settings. That isn't surprising since rotation is mostly single-threaded and these CPUs all have max turbo speeds in the 4.3 to 5.1GHz range.

So, how did the Core i9 9990XE fare? It actually did well in both categories of performance, averaging a little slower than the 9980XE in multi-threaded work and coming in around the 9900K in single-threaded tests. Here is a summary, averaging overall test results: 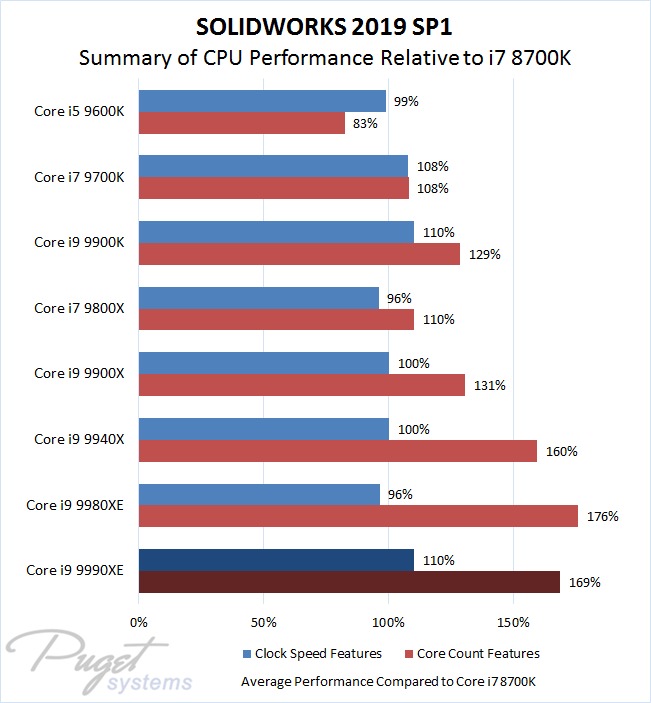 That seems on the face of it like a good combination, but unfortunately the i9 9990XE is more expensive than any of the other CPUs, runs much hotter, uses more power, cannot be purchased outside of limited auctions, and comes with no warranty. Those are not a great combination of traits for professional users, and for the time being will keep us from offering this processor in our workstations.