Recently, AMD launched their new Ryzen 7000 Series desktop processors, and we did our normal set of testing looking at gen-over-gen performance gains, along with how they compare to the Intel Core 12th Gen which can be found in our AMD Ryzen 7000 Series Processors Content Creation Review article. But, the Ryzen 7000 Series also gave us the opportunity to do a completely different rare, and unique, comparison.

What is different with Ryzen 7000 is that they have one processor (the AMD Ryzen 9 7900X) that has almost the exact same name as an older processor from Intel (the Intel Core i9 7900X). Now, the Intel Core i9 7900X was launched way back in June of 2017, so it is a bit of an old man at this point, being over 5 years old. The Ryzen 9 7900X, on the other hand, is just a child since it has only been out in the world for a few days at the time of this article.

If we ignore the architecture differences and just look at core and frequency, that means that the new 7900X should be around 25% faster for single-threaded tasks, and somewhere around 50-70% faster for highly threaded tasks. But, people tend to sleep on how big of an impact the base architecture makes, so we fully expect the actual real-world performance difference to be much larger. 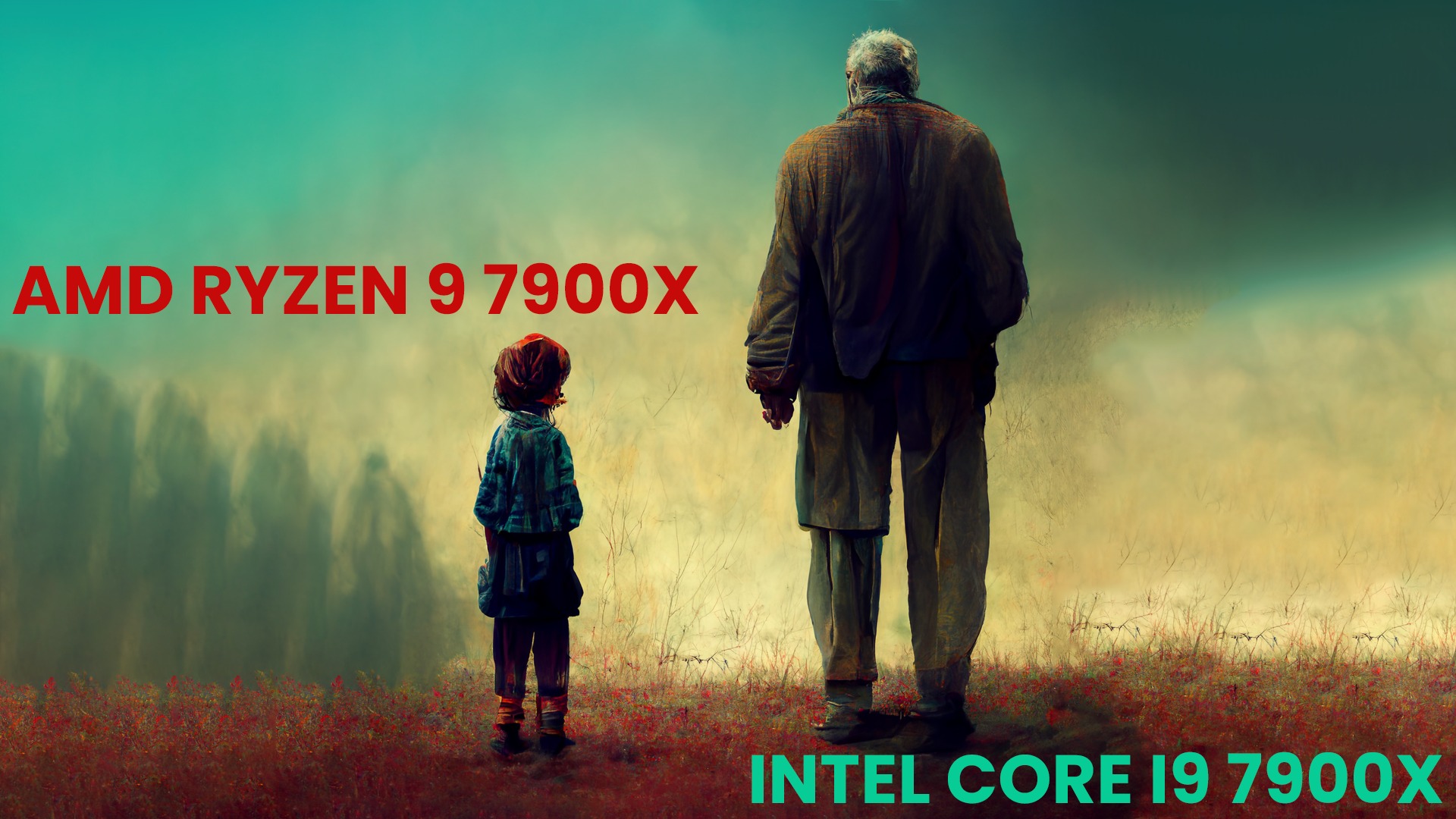 Is a battle of the names a useful, valid comparison? No, not really. But, we do often get told in the comments of our articles that new technology needs time to mature before it is able to reach its full potential. So, we will be putting that theory to the ultimate test to see if the veteran 7900X will be able to take advantage of its experience and polish, or if the new technology of the 7900X will be able to take the lead despite any future optimization it may still need to go through.

Since we are primarily concerned about CPU performance, we used a modern Samsung 980 Pro and NVIDIA GeForce RTX 3080 on both test platforms. We were hoping to use an NVIDIA GeForce 7900 (GT)X for the GPU, but unfortunately, a GPU from 2006 would be too old to be supported by most of our tests. 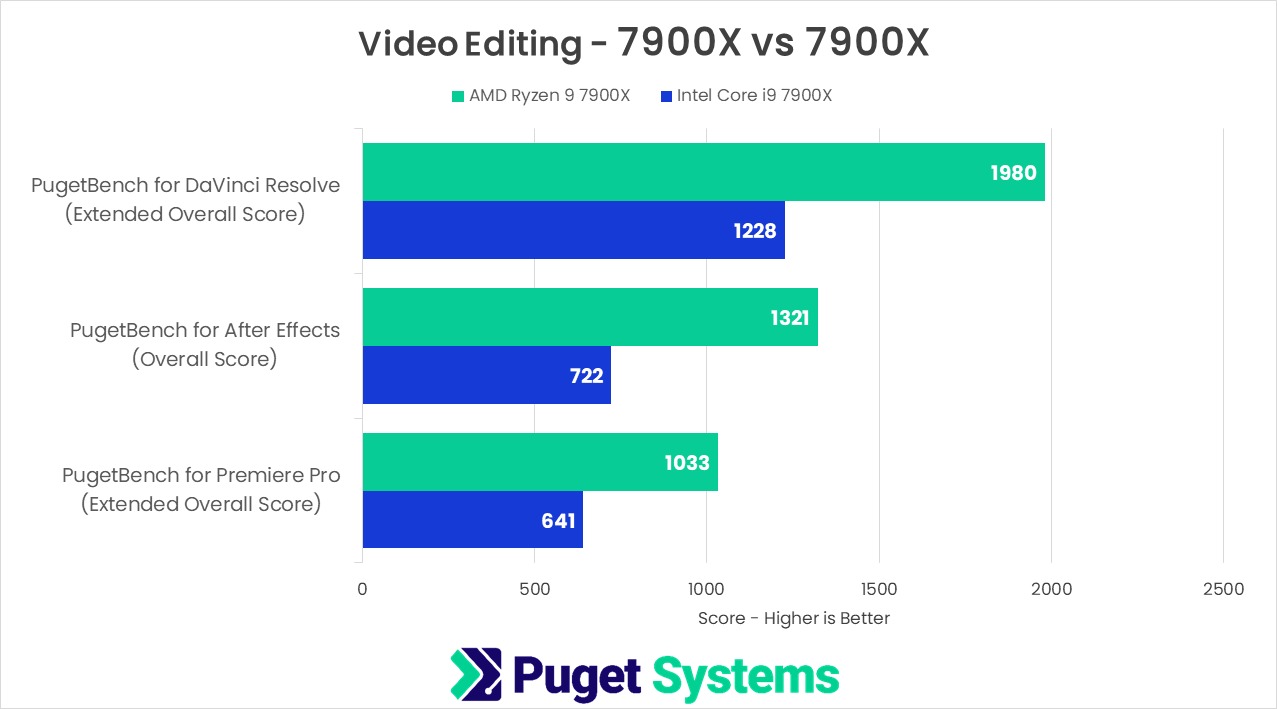 To start off, we wanted to see how the veteran Core i9 7900X is able to keep up with video editing in DaVinci Resolve Studio, Premiere Pro, and After Effects.

Already, you can see just how much of a difference 5 years of technological advancements make. The Core i9 7900X may be a fully mature and optimized platform, but the Ryzen 7900X newcomer scored 60-80% higher in our tests. That isn't quite two times faster, but it is starting to get pretty close.

Interestingly, photo editing in Photoshop and Lightroom Classic showed a slightly larger performance lead with the 7900X compared to the 7900X. It still didn't quite hit the 2x faster mark, but it was still a very large 70-80% faster overall.

Last up is CPU rendering, where the additional cores on the 7900X should help give it an extra bump in performance in addition to the newer architecture and other platform improvements.

Here, we blow right past the 2x faster barrier. For CineBench and V-Ray, we are looking at 2.4x to 2.6x higher performance with the new 7900X compared to the veteran 7900X. In this case, experience and polish simply can't hold a candle to the much newer technologies found on the 7900X

Across the board, it is clear that for the applications we tested, a modern CPU with the latest technology is going to outperform an older, but highly polished, platform. Within a single generation or two, things could be different, but we are talking about 5 years of technological advancements. Experience can make up for a lot, but sometimes the newcomer is simply faster and better.

Because of this, AMD firmly holds the crown for "fastest 7900X". Of course, this could change if Intel releases a new 7900X of their own, but that would just be silly.

At this point, we feel like we should be 100% clear that this is just a fun article, and should not be taken in any way as a real "AMD vs Intel" comparison. While neat to see how much processor technology has advanced in 5 years, a more valid comparison would be something like AMD Ryzen 7000 vs Ryzen 1000, or Intel Core 12th Gen vs Core 7th Gen. Coincidentally, that is something we are planning on doing in the near future, so keep tuned for that! In the meantime, if you want to see how AMD and Intel actually compare on an even playing field, we recommend checking out our AMD Ryzen 7000 Series Processors Content Creation Review article.