While gaming is almost always a major focus during these GPU launches, professional applications like After Effects are becoming more and more important. In fact, if you view the product page for the 6900 XT, you will note that they are starting to include Content Creation performance from benchmarks like our very own "PugetBench for Premiere Pro".

Ever since After Effects 2015.3, Adobe has been steadily adding support for GPU acceleration which has made the video card an increasingly important part of an After Effects workstation. However, most of After Effects is still limited by the performance of your CPU, which means that many users will stick with a relatively moderate GPU in order to spend more of their budget on their system's processor. This likely makes the Radeon 6900 XT complete overkill for After Effects, but the only way to know for sure is to test it to find out. 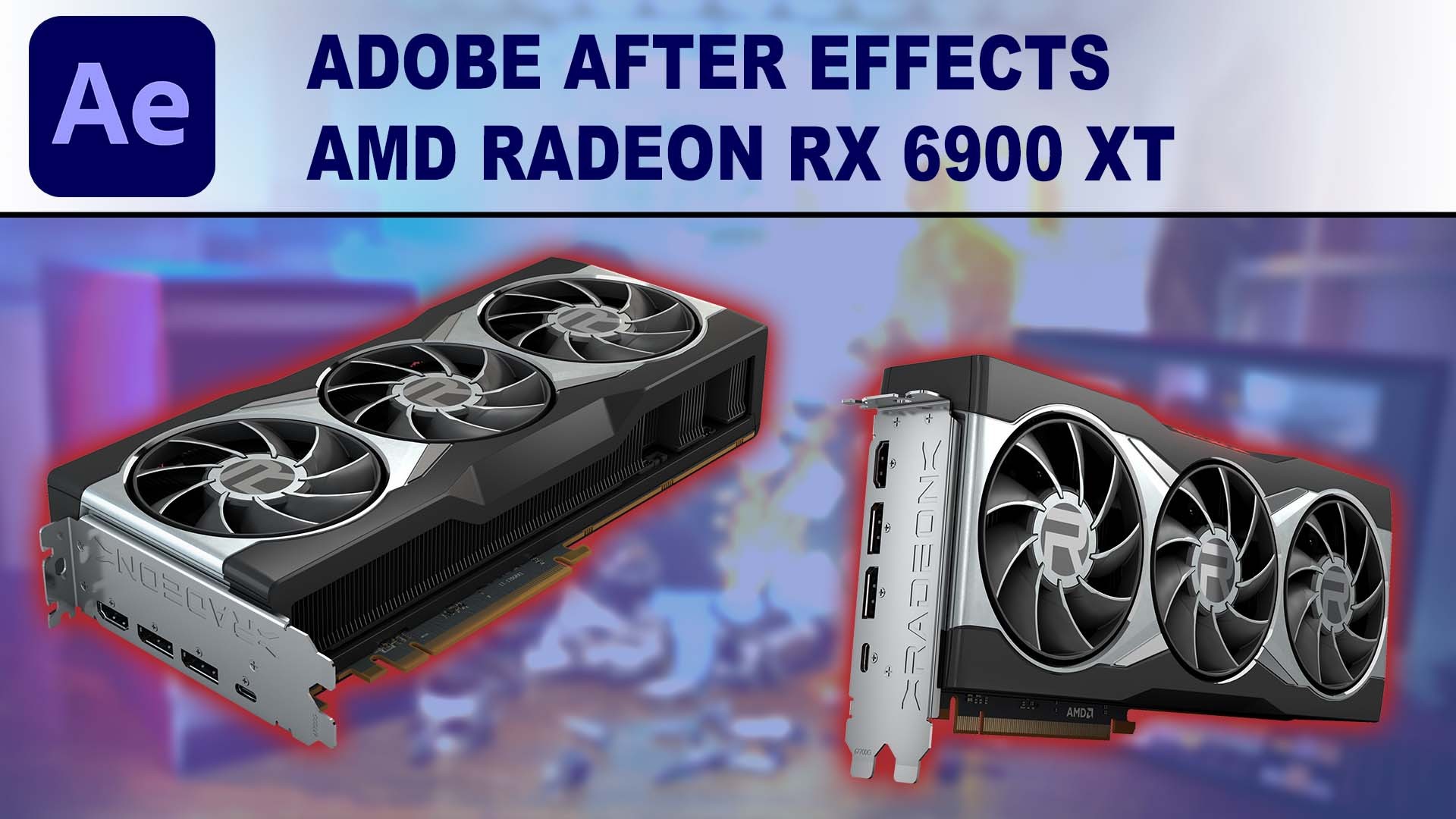 To test each GPU, we will be using one of the fastest platforms currently available for After Effects – most notably the AMD Ryzen 5950X. Since After Effects utilizes the CPU so heavily, this should minimize the impact of the processor and allow each GPU to perform at their fullest potential. Even with this, however, be aware that there typically isn't much variation in performance between different video cards outside of very specific workloads. 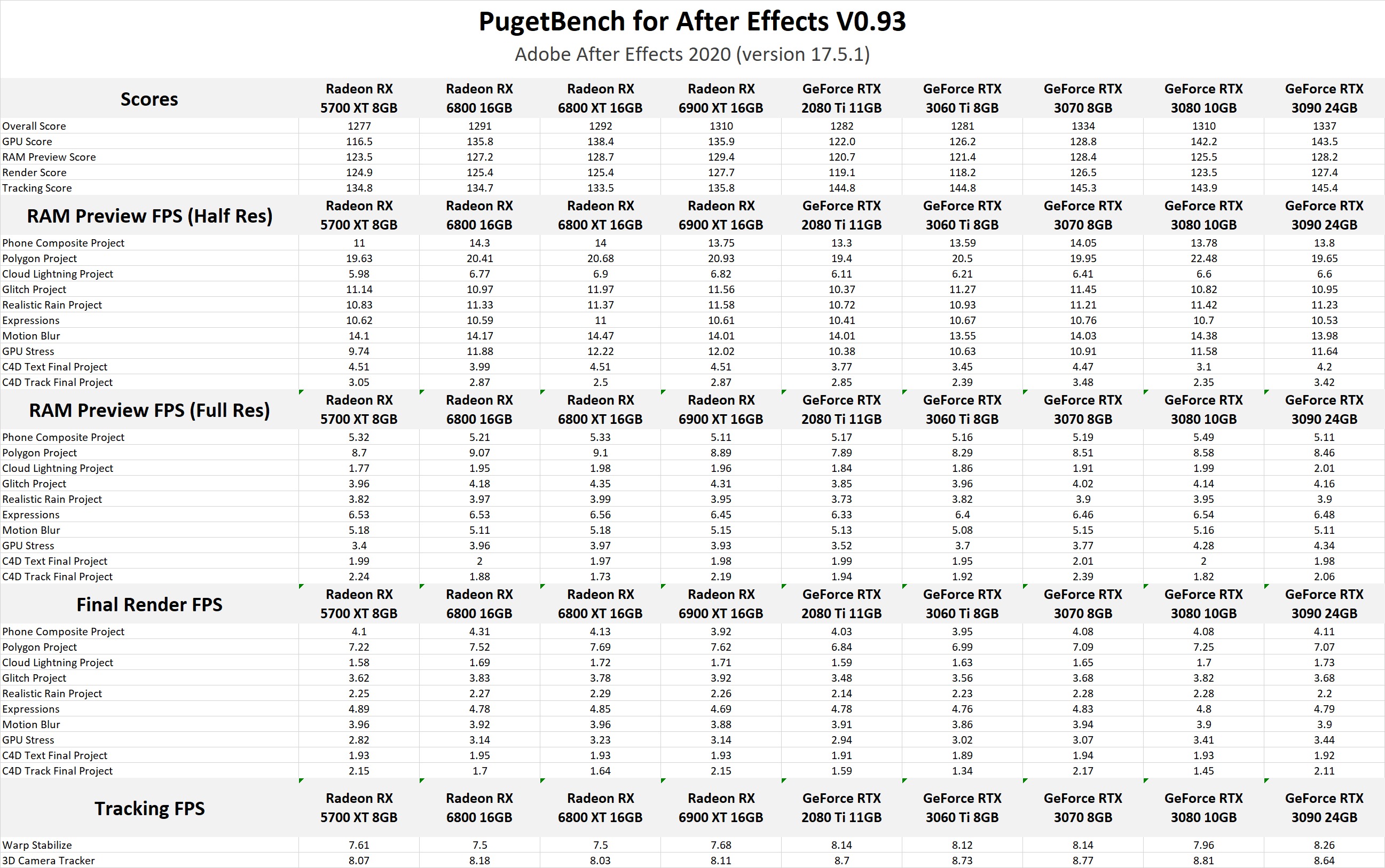 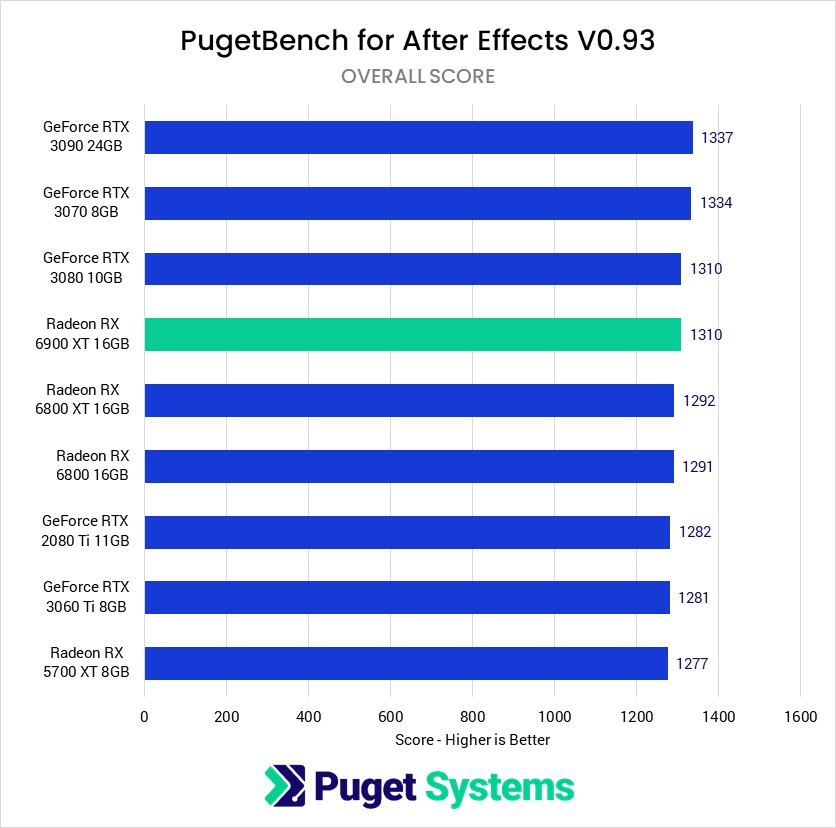 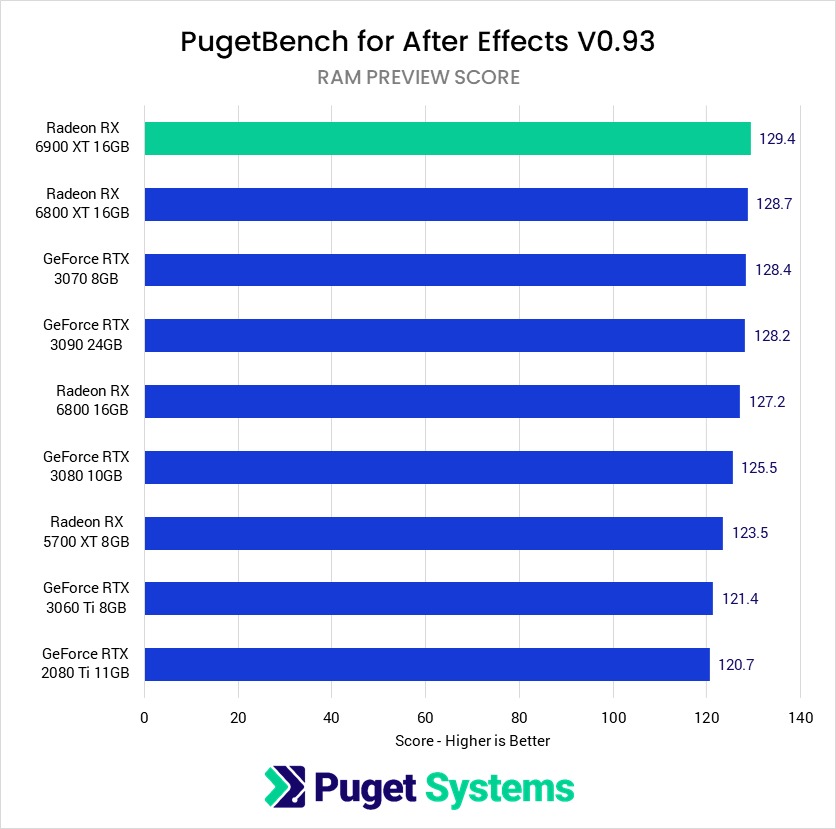 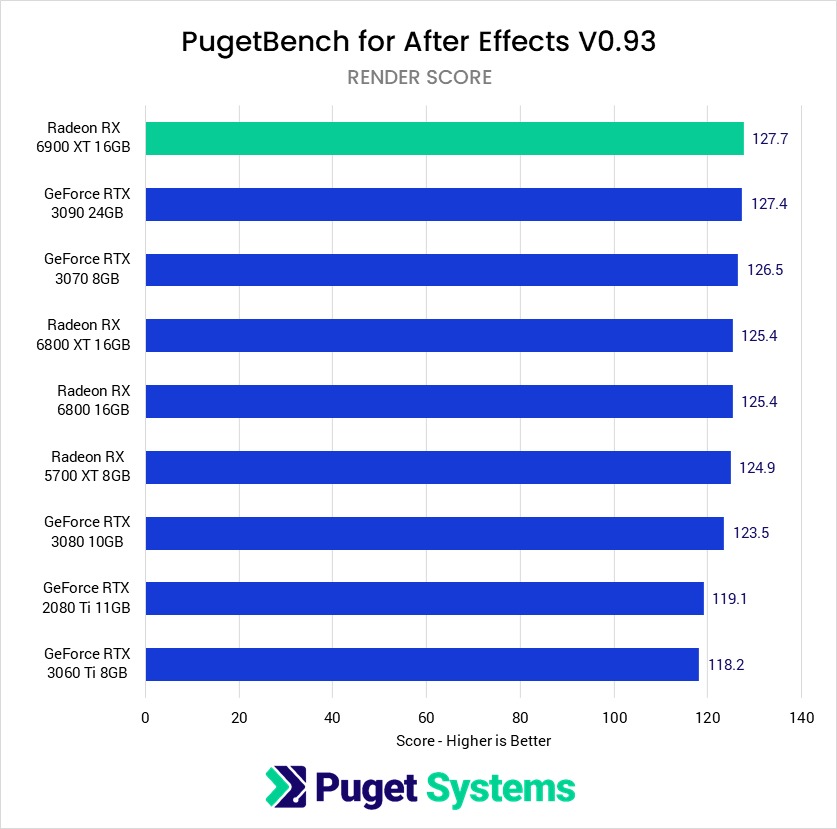 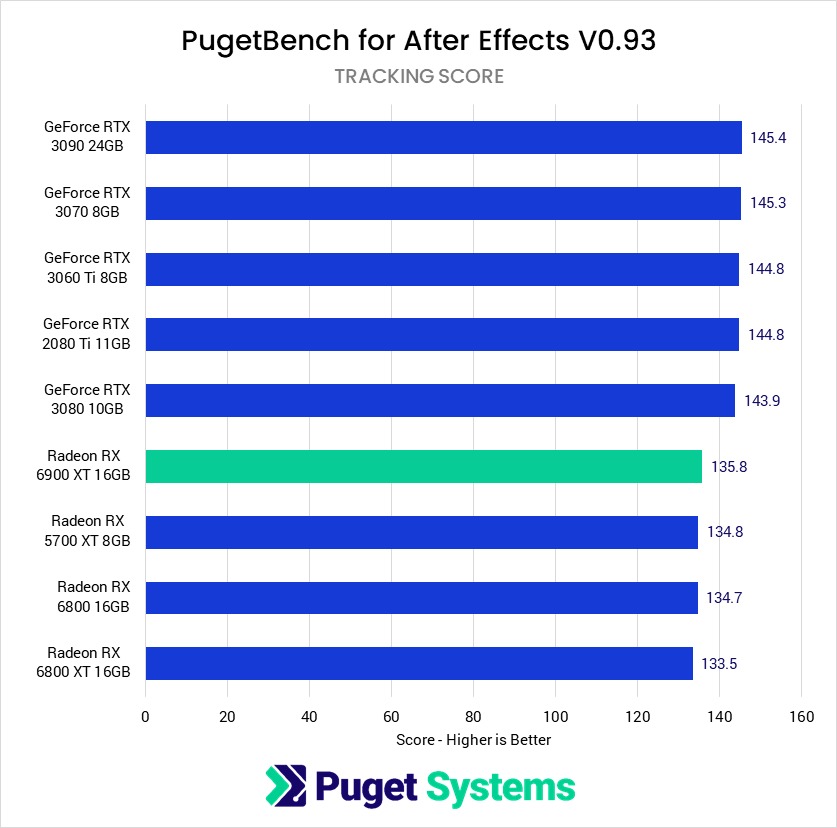 Looking at the Overall Score, the AMD Radeon 6900 XT does just fine and actually happens to exactly tie with the RTX 3080. Of course, the difference between the fastest and slowest GPU we tested is just under 5%, which essentially ties the performance for all the cards. 5% is right at the edge of what we would call the margin of error for this kind of testing, but even if it is completely accurate, you likely would not be able to notice this small of a performance difference in your day-to-day work.

If we dive into the results a bit closer, however, the 6900 XT does technically top the charts for the RAM Preview and Render tests, although once again the difference is so small that if we were to re-run the benchmark, it is likely that the results for the RTX 3070/2080/3090 and Radeon 6800/6800 XT/6900 XT would jump around since they are all well within the margin of error.

However, the potentially slightly higher performance in those tests is offset by the fact that AMD cards tend to give around 8% lower performance in our Tracking tests. The difference in that test is outside the margin of error, so while the 6900 XT (and other AMD cards) are not definitively better than their NVIDIA counterparts for RAM Preview and Rendering, they are measurably are worse for tracking. 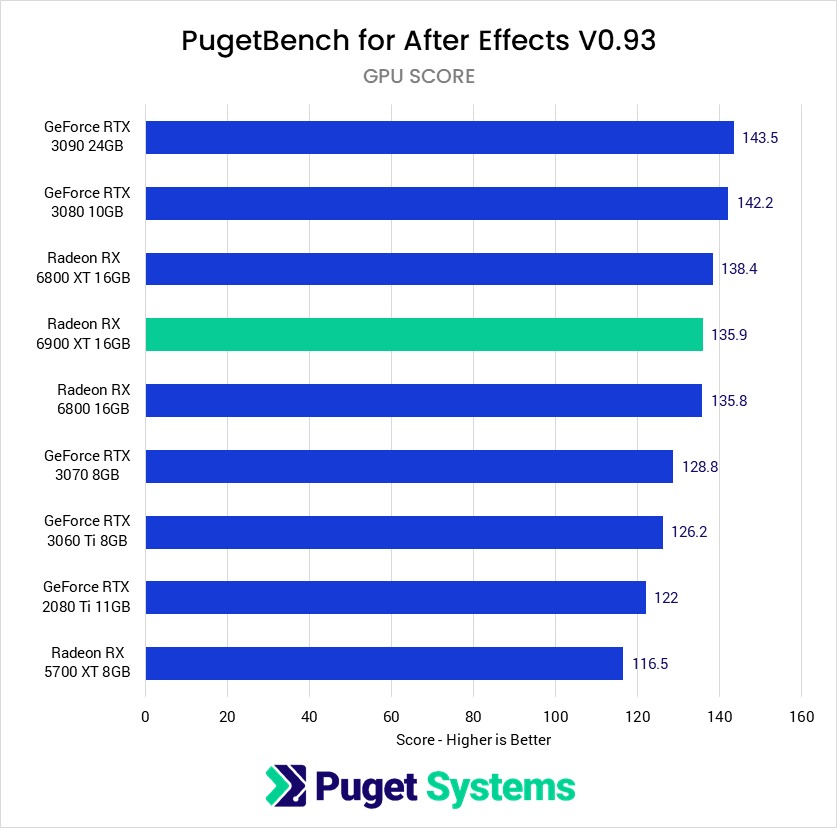 How well does the AMD Radeon RX 6900 XT perform in After Effects?

In most cases, unless you need the 16GB of VRAM (which shouldn't be necessary for the vast majority of After Effects workflows), the "sweet spot" for the latest GPUs from NVIDIA and AMD is probably the GeForce RTX 3070. Although even then, it isn't that much faster than an RTX 3060 Ti or Radeon 5700 XT which are a good chunk less expensive.

In fact, the biggest reason to invest in a higher-end GPU is not for the higher performance in After Effects, but for rendering engines like OctaneRender or Redshift that you might utilize in your workflow. Unfortunately for AMD, most of these GPU-based rendering engines only support NVIDIA CUDA at the moment which removes AMD from the equation entirely. In addition, NVIDIA tends to be even stronger in other Adobe applications like Premiere Pro, making NVIDIA a better choice in most cases.