Skip to content
Always look at the date when you read an article. Some of the content in this article is most likely out of date, as it was written on March 8, 2018. For newer information, see our more recent articles.

Since AE 2015, choosing the right CPU has been a bit of a challenge as exactly the right CPU has been subtly and steadily changing. In AE 2014 and before, the "Render Multiple Frames Simultaneously" feature made it simple: more cores is better. However, with AE 2015 this feature was dropped as it was incompatible with the new GPU acceleration that Adobe was developing for After Effects. This change largely made core count secondary to raw CPU frequency, but things have again been changing over the last year or so due to the integration with Cinema4D.

To be fair, for most users a high frequency CPU like the Core i7 8700K should still give them the best performance in After Effects – easily outperforming more expensive CPUs that are up to 4x the cost. However, if your projects include 3D Rendering, Adobe has been steadily shifting over to a workflow that takes advantage of the recent integration with Cinema4D. The older "Classic 3D" and "Ray-traced 3D" renderers are still available, but from what we can see Adobe largely halted development of these several years ago. While not based on any information from Adobe, in our opinion there is a decent chance that these older renderers will be dropped completely in future versions, making C4D the only way to get 3D Rendering in After Effects. 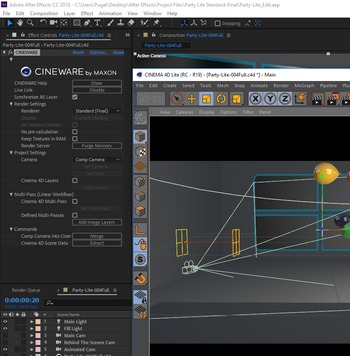 What it comes down to is that there are two workflows in AE that each prioritizes a different aspect of the CPU: "standard" projects which favor CPU frequency and projects using Cinema4D which should favor higher core counts. To see how various CPUs compare in each of these workflows, we will be looking at RAM Preview and Final Render performance with a range of After Effects projects. If you would like to skip over our test setup and analysis of the individual benchmarks, feel free to jump right to the conclusion section.

For After Effects, there is a wide range of CPU options that might be great depending on exactly what you do. For general AE tasks, a CPU with high single-threaded performance and a moderate core count like the Core i7 8700K should give you the best possible performance. Depending on how much you use the newly integrated "Cinema 4D" 3D renderer, however, you might see massive performance increases with a higher core count CPU like the Intel X-series or AMD Threadripper CPUs.

Because of the wide range of useful CPUs, we decided to include a range of models in our testing covering various types of CPUs that we felt might be a good choice for After Effects. This includes choices from the Intel 8th Gen Core i5/i7, Intel X-series Core i7/i9, AMD Ryzen, and AMD Threadripper lines of processors.

On thing we want to note is that we are technically overclocking the Ryzen platform by using DDR4-2666 memory since we are using four sticks of dual rank RAM. According to this blog post – which we have confirmation from AMD that it is still accurate even with the newer AGESA BIOS – the highest RAM speed that is officially supported with four sticks of dual rank RAM is just DDR4-1866. Our initial Ryzen testing was performed with DDR4-2400 RAM, but even then we received a lot of comments about how we were artificially limiting the performance of Ryzen even though we were actually overclocking the platform. Using DDR4-2666 RAM doesn't really change the results too much, however, so we opted to go ahead and use the faster RAM. We're sure some will say we should use even faster DDR4-3200 RAM, but there is a limit to what we are willing to use considering our testing is first and foremost to help ensure we are offering the right hardware to our customers. Since DDR4-3200 is well beyond what we consider to be acceptably stable for most end-users, it is extremely unlikely to be a part of our testing in the near future.

We also want to point out that while our test platforms are using a single hard drive, that is not actually what we would typically recommend to our customers. A two (or more) drive configuration – with the cache files on a secondary drive – can make a big impact when scrubbing through complex projects. But since we will not be testing anything that would benefit from multiple drives in this article, we opted to use a single drive to cut down on the number of hardware variables. 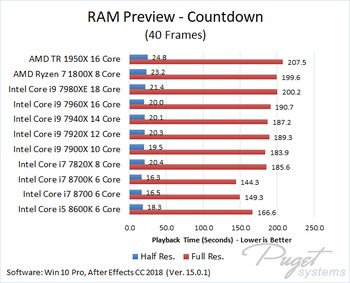 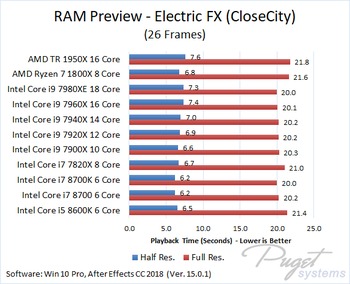 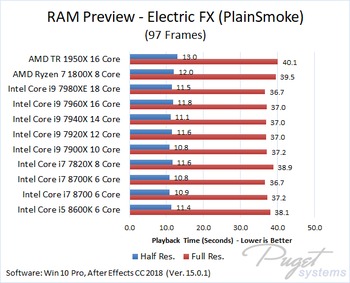 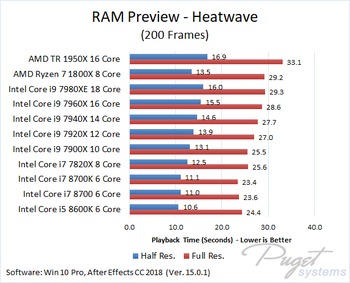 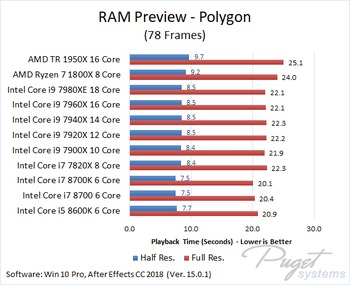 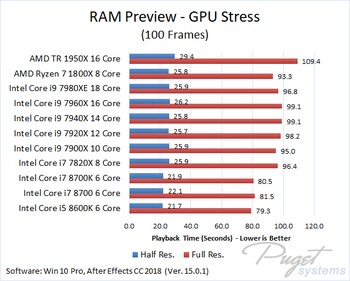 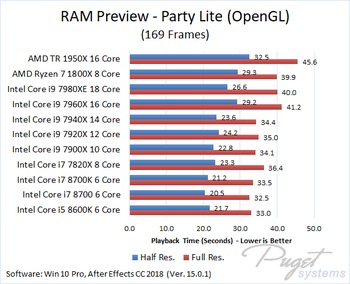 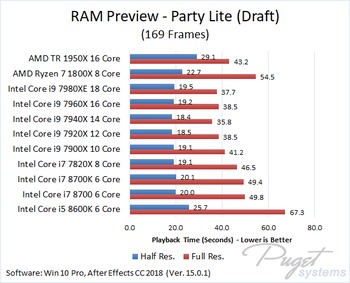 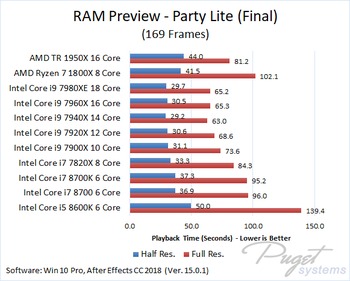 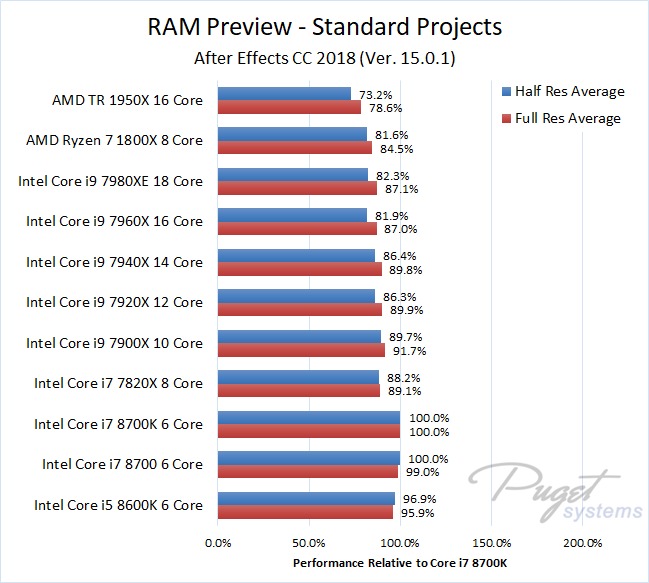 Starting with the "Standard" projects, we see performance that is almost identical to many of our previous articles. In fact, compared to our After Effects CC 2017.2 CPU Performance: Core i7 8700K, i5 8600K, i3 8350K article, the relative performance between these CPUs is effectively the same. There are minor differences due to the fact that we have recently updated our test projects, but overall it is clear that the Core i7 8700K is still king due to it's high single-threaded performance – although the Core i7 8700 is only a tiny bit behind. 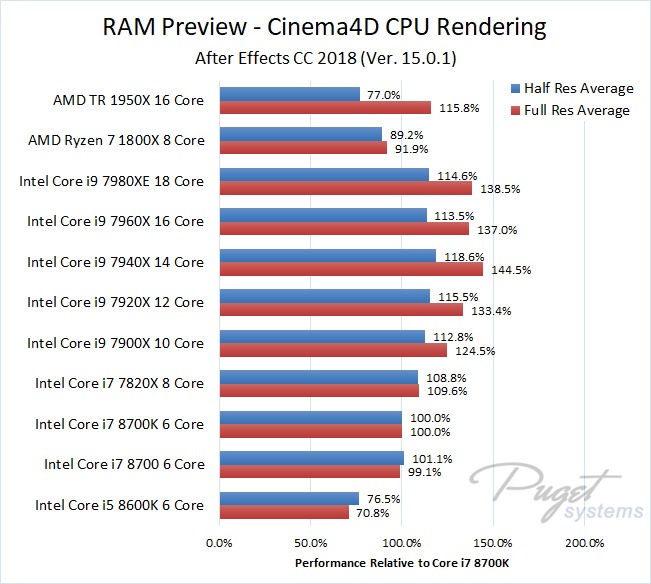 One of the changes we made with our new set of test projects was to include one that used the Cinema4D rendering engine. In our previous article we "faked" this kind of testing by using the CineBench benchmarking utility, but if you compare those results to what we saw in this real-world test you will notice that the results are dramatically different. Higher core counts are in general still better, but the AMD CPUs in particular did not do very well. For example, while CineBench reports the AMD Threadripper 1950X should be roughly twice as fast as the Core i7 8700K, when you are using C4D through After Effects that CPU is actually anywhere from 23% slower to just 16% faster than the 8700K depending on the playback resolution. This is an absolutely massive difference and really goes to show how important real-world testing is rather than relying on stand-alone benchmarking utilities.

This lower performance is also apparent with the Intel CPUs, although it is not nearly as dramatic. In fact, we actually hit a wall at the Core i9 7940X 14 Core where using even higher core count (and more expensive) CPUs resulted in a loss of performance. This is likely due to the fact that those CPUs run at a lower frequency and After Effects really relies on a high CPU frequency for optimum performance. 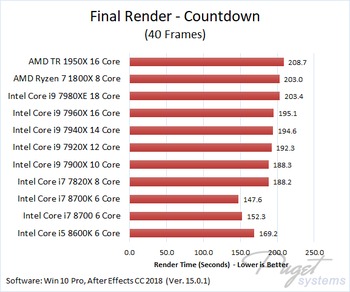 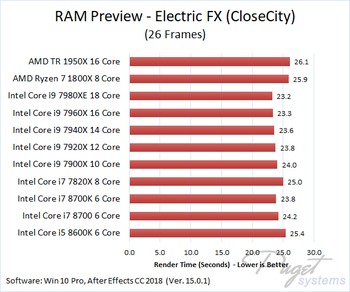 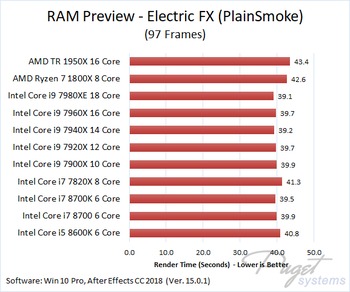 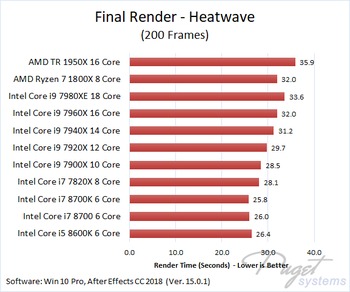 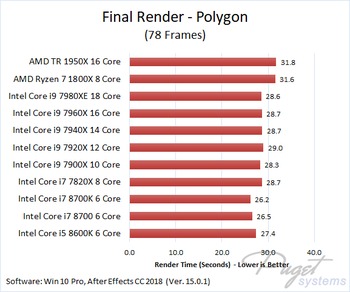 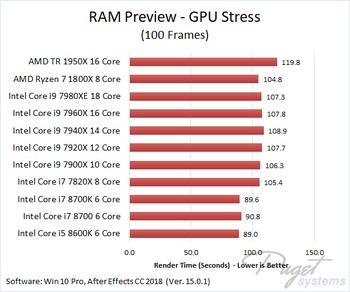 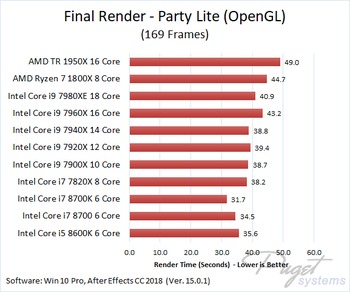 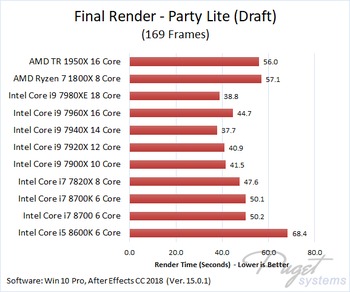 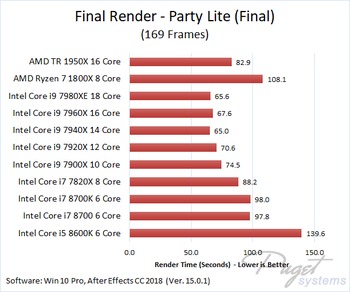 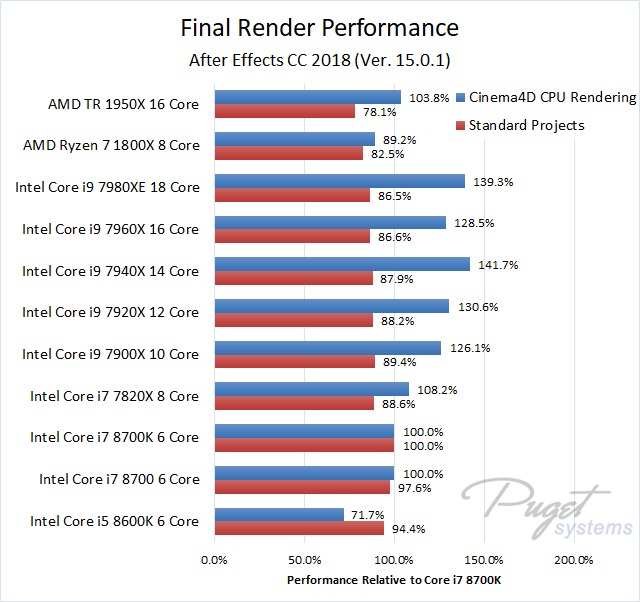 For Final Render performance, we once again decided to break out the projects using the CPU rendering portion of Cinema4D since whether or not you use that feature dramatically changes performance.

Starting with the "Standard" projects, the relative performance between each CPU is pretty much identical to what we saw in the RAM Preview testing when we used full resolution preview. This makes sense as rendering each frame into RAM is really not all that much different than rendering each from to the hard drive even if there is the addition step of encoding it to a .AVI video file.

In fact, this holds true for the projects that use Cinema4D CPU rendering as well. The AMD CPUs did a bit worse than our RAM Preview test at full resolution, but otherwise pretty much everything we talked about in the previous section completely holds true for this test as well. 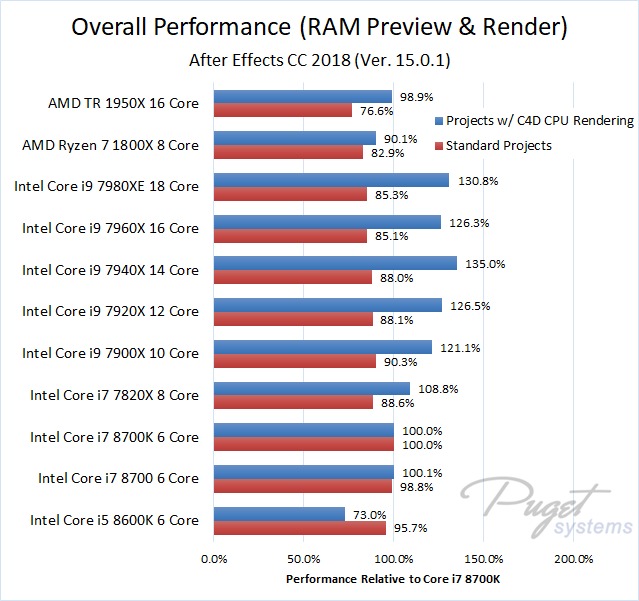 Averaging the results from both the RAM Preview and the Final Render tests – but keeping the Cinema4D CPU projects separate – we get a clear look at how the various CPUs we tested compare in After Effects 2018.

The first thing we want to call out is how different the Cinema4D CPU rendering results are compared to what we saw in our previous article where we simply used the CineBench benchmark utility (chart from that article is to the right). CineBench is an excellent benchmark, but we really should have anticipated how much After Effects itself would affect performance. Relying on that benchmark utility alone is led us to recommending AMD Threadripper for those that are taking advantage of the new C4D integration, but that platform is clearly not a great choice. So before anything else was want to apologize and retract our previous recommendation. Based on our new testing, If you are using C4D through After Effects we would recommend the Core i7 8700K 6 Core as a great starting point followed by either the Core i9 7900X or Core i9 7940X if you need higher performance. 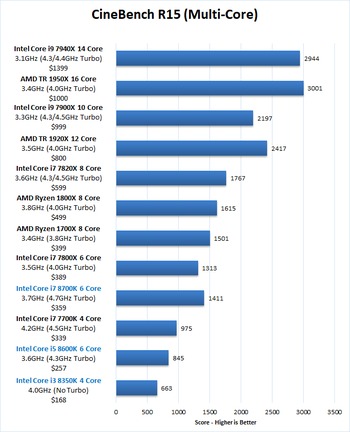 For general AE usage, there are pretty much two types of CPUs that you might choose. To get the best performance overall performance, it is going to come down to one of the Intel 8th Gen CPUs like the 8600K, 8700, or 8700K. The Core i7 8700K is currently our go-to recommendation, although the Core i7 8700 is only very slightly behind for a small savings in cost. The downside to these CPUs is that they are limited to 64GB of RAM. This should be plenty for most users, but if you tend to store a lot of high resolution frames in RAM Preview than one of the X-series Intel CPUs may be a better choice.

If you are one of those users that need more RAM, these X-series CPUs support up to 128GB of RAM but they are ~10% slower for most AE projects compared to the Core i7 8700K. However, having that RAM is going to more than make up for that small performance loss for those that can really utilize it as it will all you to play through more frames without the potential need to re-render them over and over.

Whether a Core i7 8700K or one of the higher-end X-series CPUs is right for you is going to entirely depend on both your budget, where you need more performance, and how much system RAM you need. Overall, however, the Core i7 8700K in particular is an excellent overall CPU for After Effects while the Core i9 7900X and Core i9 7940X are great for those that need more system RAM or those that are making heavy use of the new integration with Cinema4D.