While higher CPU core counts have been an ongoing theme this year, this really has not affected most After Effects users. Ever since version 2015 when the "render multiple frames simultaneously" feature was removed, performance in After Effects has been more about CPU frequency rather than core count. Because of this, a quad core CPU like the Core i7 7700K is almost always faster than a higher core count CPU that is many times more expensive. What is interesting with the new Intel "Coffee Lake" 8th Gen CPUs is that while we are getting an increase in core count, the operating frequencies have not been significantly reduced, In fact, most of the Turbo Boost 2.0 speeds are actually a bit higher! The end result should - hopefully - be a significant increase in After Effects performance but the only way to know for sure is to simply benchmark the new CPUs to find out.

While Intel is releasing a number of "Coffee Lake" 8th Generation CPUs, in this article we are primarily going to focus on the Core i7 8700K, Core i5 8600K, and Core i3 8350K to see how they perform in After Effects. If you wish to read one of our other articles looking at how these CPUs do in applications like Photoshop, Lightroom, and After Effects, you can view a full list here.

There are a wide variety of tasks we could test in After Effects, but in this article we will specifically be looking at RAM Preview, Final Render,and 3D Rendering performance. Since Adobe has been adding more and more support for GPU acceleration since AE 2015.3, we are going to be testing both standard projects as well as projects that make heavy use of accelerated effects including Lumetri Color, Sharpen, and Gaussian Blur. If you would like to skip over our test setup and analysis of the individual benchmarks, feel free to jump right to the conclusion section.

For After Effects, there is a pretty wide range of CPUs that can be great depending on what exactly you do. For general AE tasks, a lower core count CPU like the Core i7 7700K or the new Core i7 8700K should give you the best possible performance. Depending on how much you use the "Cinema 4D" 3D renderer, however, you might see massive performance increases with a CPU like the AMD Ryzen or Threadripper CPUs. The AMD Threadripper CPUs are also a good choice if you need a higher amount of system RAM for more complex projects, although the Intel Core i7/i9 X-series CPUs are even better as they allow up to 512GB of RAM on motherboards that support Registered memory.

Because of the wide range of useful CPUs, we actually opted to include every CPU that we felt might be a good choice for After Effects. This is more than we typically like to include in an article since it is getting into information overload, but in this case we feel it is important to look at the whole picture.

On thing we want to note is that we are technically overclocking the Ryzen platform by using DDR4-2666 memory since we are using four sticks of dual rank RAM. According to this blog post - which we have confirmation from AMD that it is still accurate even with the new AGESA BIOS - the highest RAM speed that is officially supported with our four sticks of dual rank RAM is just DDR4-1866. Our previous Ryzen testing was performed with DDR4-2400 RAM, but even then we received a lot of comments about how we were artificially limiting the performance of Ryzen even though we were actually overclocking the platform. Using DDR4-2666 RAM doesn't really change the results too much, however, so we opted to go ahead and use the faster RAM. We're sure some will say we should use even faster DDR4-3200 RAM, but there is a limit to what we are willing to use considering our testing is first and foremost to help ensure we are offering the right hardware to our customers. Since DDR4-3200 is well beyond what we consider to be acceptably stable for most end-users, it is extremely unlikely to be a part of our testing in the near future.

We also want to point out that while our test platforms are using a single hard drive, that is not actually what we would typically recommend to our customers. A two (or more) drive configuration - with the cache files on a secondary drive - can make a big impact when scrubbing through complex timelines. But since we will not be testing anything that would benefit from multiple drives in this article, we opted to use a single drive to cut down on the number of variables.

In order to accurately benchmark the different CPUs, we tested the performance when rendering and playing 2D animation projects as well as when working with 4K ProRes 4444 video files using a number of popular GPU accelerated effects. Lastly, we benchmarked the CPUs with Cinebench R15 which should be a great indicator of performance when using the "Cinema 4D" 3D renderer. This won't test everything you could possibly do in After Effects, but by testing a variety of projects from different sources we hope to find a number of trends that will help us decide what CPU is the best for AE. 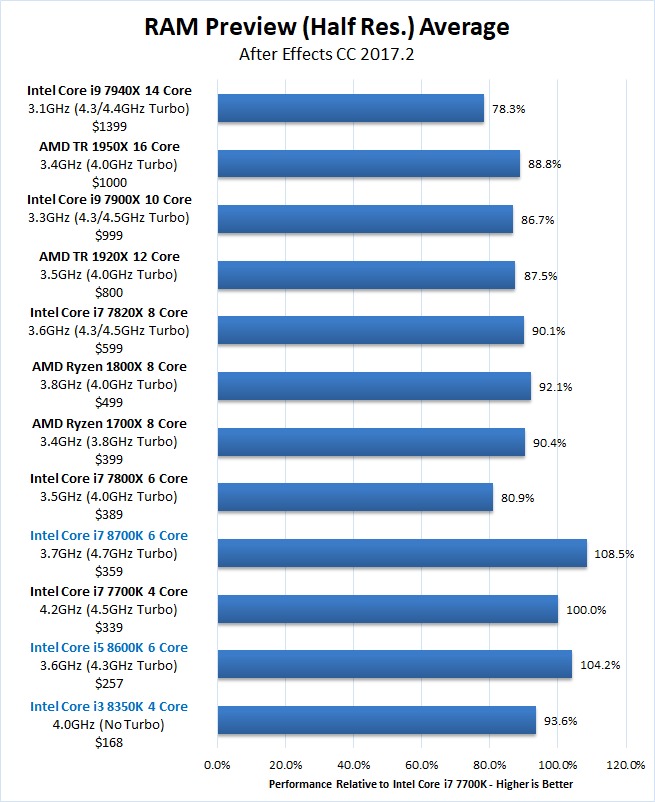 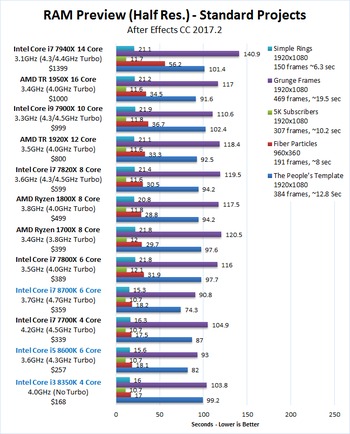 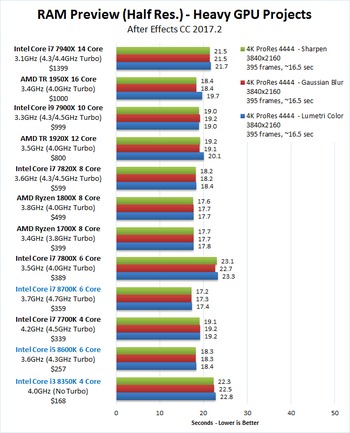 Since we are comparing 12 different CPUs across 8 different projects, it would take us a long time to go through the results one by one. Because of this, we decided to compile all the results into an overall average for each CPU compared to the Intel Core i7 7700K. As the highest-end CPU from the previous 7th Gen CPU line, it should be a great comparison point to judge the new CPUs against. If you wish to examine the raw results yourself, you can do so by clicking on the "Show Raw Results" link under the chart. 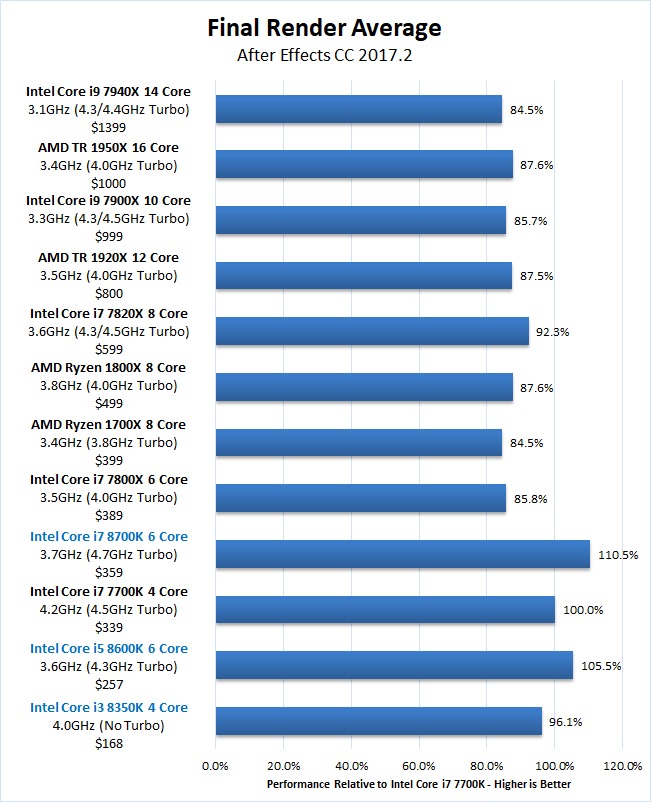 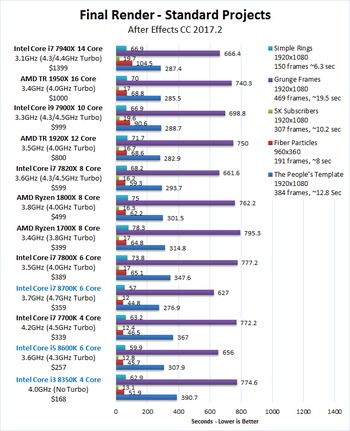 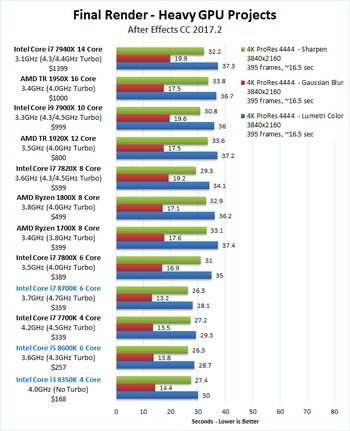 Just like in the previous section, since we are comparing 12 different CPUs across a range of projects, we decided to compile all the results into an overall average for each CPU compared to the Intel Core i7 7700K. If you have the time and will, feel free to examine the raw results yourself by clicking on the "Show Raw Results" link below the chart.

Overall, the results here are pretty similar to the previous section although the Coffee Lake CPUs were actually a few percent faster relative to the Core i7 7700K.

Results are not accurate to what you would actually see using C4D through AE! Since this article was published, we have updated our testing to include actual AE projects that utilize the Cinema4D 3D renderer. In those tests, the benefit of higher core count CPUs was significantly lower than what you would see using CineBench R15. Please view our After Effects CC 2018 CPU Comparison: Intel 8th Gen vs X-series vs Ryzen vs Threadripper article for more accurate benchmark results. 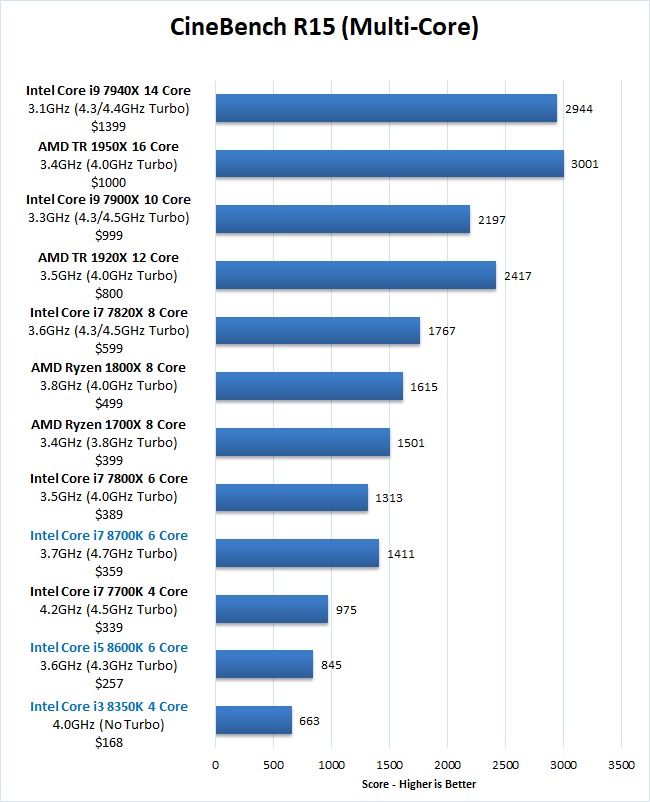 When doing a 3D render with the Cinema 4D engine, the new Core i7 8700K is a huge 45% faster than the Core i7 7700K. This is an absolutely massive performance gain that will noticeably reduce the amount of time it takes to complete a render. Even with this improvement, however, if 3D rendering is something you do a lot of you may want to consider one of the higher core count CPUs from AMD or Intel. The question of exactly which one would be best we will leave for the next section as the performance in general AE tasks is something that also needs to be taken into account. 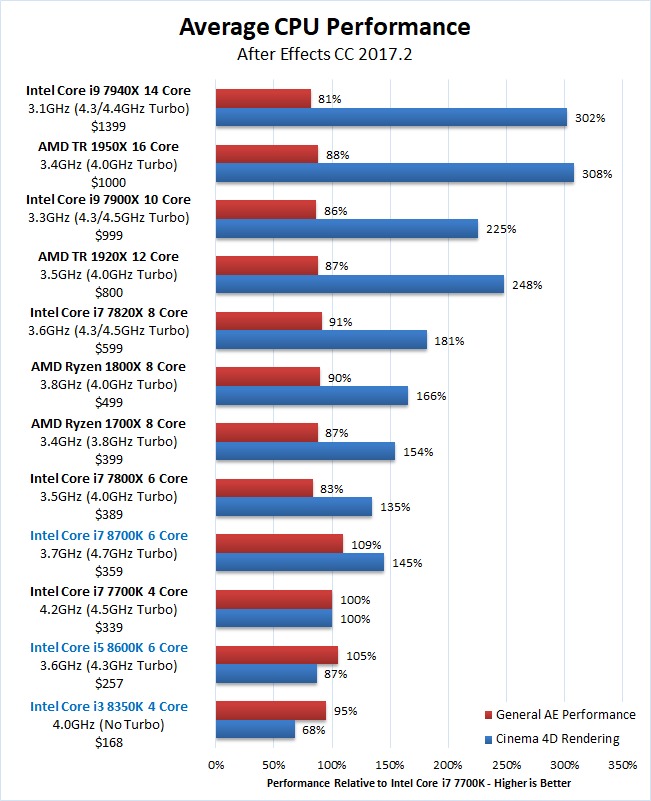 Averaging our results from both the RAM Preview and Final Render sections - but keeping the Cinema 4D rendering results separate - we get a clear look at how the new Core i7 8700K, Core i5 8600K, and Core i3 8350K perform in After Effects.

The Cinema4D results in this article are not accurate to what you would actually see using C4D through AE! Since this article was published, we have updated our testing to include actual AE projects that utilize the Cinema4D 3D renderer. In those tests, the benefit of higher core count CPUs was significantly lower than what you would see using CineBench R15. Please view our After Effects CC 2018 CPU Comparison: Intel 8th Gen vs X-series vs Ryzen vs Threadripper article for more accurate benchmark results.

For 3D rendering, the new Core i3 and i5 CPUs are not that impressive but the Core i7 8700K did a fantastic job. This makes the Core i7 8700K a great CPU if you occasionally or rarely use the Cinema 4D renderer, although there are a number of other choices if you need even more 3D rendering performance. Our go-to recommendation for this type of workload is currently the AMD Threadripper 1920X or 1950X as you get terrific 3D rendering performance for your dollar with only a relatively modest drop in general AE performance.

Whether a Core i7 8700K, an AMD Threadripper CPU, or even an Intel X-series CPU is right for you is going to entirely depend on both your budget, where you need more performance, and how much system RAM you need. Overall, however, the Core i7 8700K in particular is an excellent CPU for After Effects.