Skip to content
Always look at the date when you read an article. Some of the content in this article is most likely out of date, as it was written on March 6, 2018. For newer information, see our more recent articles.

A couple weeks ago I published an article looking at GPU performance in SOLIDWORKS 2018, where we came to the conclusion that our testing was no longer sufficient to show any performance difference within each GPU family (Quadro, GeForce, Radeon Pro, etc). I wasn't sure if it was our methodology that was lacking, or the complexity of our models, or some other factor like changes to SW itself – but based on the comments people left it sounded like the way we approached the issue was sound. To see if it was a deficiency in our available models, we reached out to folks involved with a SOLIDWORKS User Group event that we sponsored to ask if they could provide a bigger assembly – something truly monstrous – and they delivered. Armed with a model made up of an order of magnitude more parts and almost 30 times as many triangles as our biggest existing assembly, I ran our benchmarks once more.

As an aside, we already know that GeForce cards don't perform well in SOLIDWORKS – so I left those out this time around. We are just looking at the professional-grade video cards from NVIDIA and AMD, all of which are officially certified for use in SOLIDWORKS 2018.

This platform is built around an Intel Core i7 8700K, as that is the current generation CPU that gives the best possible performance in SOLIDWORKS for general usage and modeling. More than enough RAM was included, to avoid that being a bottleneck of any kind, and a super-fast M.2 SSD was used for the same reason. Since we saw effectively no difference between 1080P and 4K test results in our last comparison, and since we recently upgraded all the monitors on our lab test benches, this time the tests were only run at 4K.

To perform the actual benchmarking, I used the same basic testing we've used here at Puget for analyzing graphics performance in SOLIDWORKS in the past: a mix of AutoIt scripts and SOLIDWORKS macros to set the different display settings, load the relevant model, and record the average FPS while rotating the model. Since I already have data from the other models we've run in the past, I skipped repeating all that work and just ran the tests with the new assembly. It is a SOLIDWORKS representation of a Lego model, the Tower Bridge (set #10214) that honors the famous London landmark. It was provided to us by the organizer of the CAD Monkey Dinner we sponsored at SOLIDWORKS World 2018, Daniel Herzberg, and he has requested that the files themselves be kept private. It is massive. It consists of 4372 parts and 40.9 million triangles. This is substantially larger than anything we've been able to test within the past, so it should help answer the questions we were left with at the end of our last article. 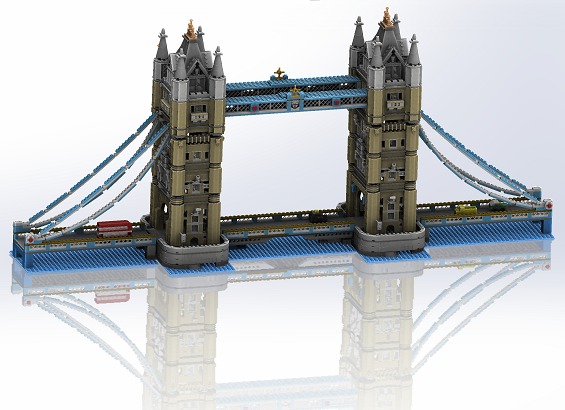 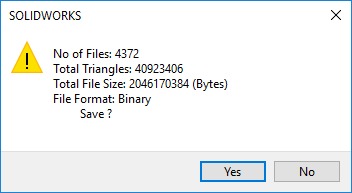 With this new, complex assembly we can finally see a difference in performance between some of the Quadro and Radeon Pro cards: 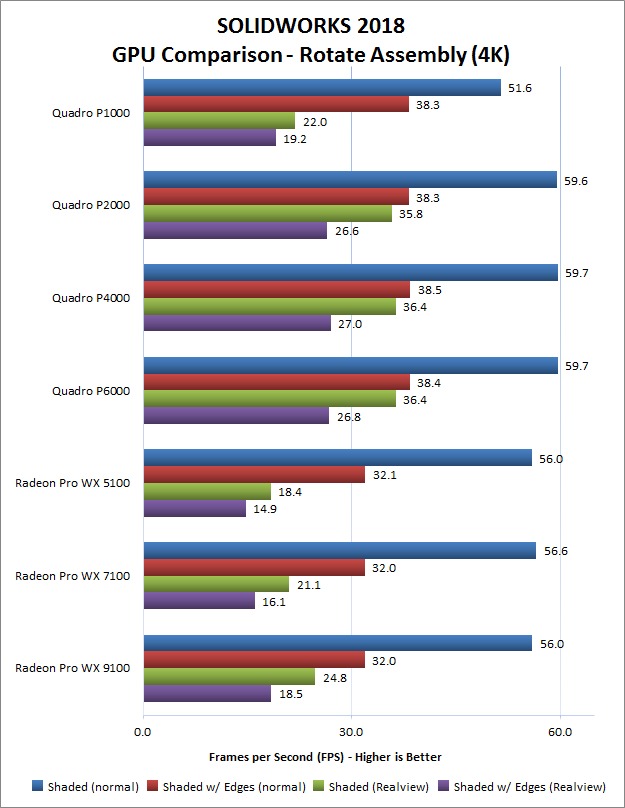 It isn't huge, but there is a noticeable drop-off in performance with the entry-level Quadro P1000 on this model. Shaded with Edges performance matches the other Quadro models, but the other three display modes all show a 13 to 38% drop in frame rate. The other Quadro cards, from the P2000 to P6000, all perform basically the same: within a single fps, and so well within the margin of error. On the Radeon Pro side, all three cards we tested performed about the same in the "normal" modes, but there is a clear progression on the Realview tests with each card being faster than the one before it. The jumps between each model are around 10% or so – not huge, but definitely not just a testing error either.

Where it gets even more interesting is comparing the Radeon Pro cards to their Quadro competition. The NVIDIA Quadro cards are noticeably faster across the board, with the minor exception of the P1000 being slower in Shaded (normal) mode – but it bests two of the three Radeon Pro cards in the other modes, and even passes the top-end WX 9100 in both "with Edges" tests.

We now know that with sufficiently complex assemblies there is a performance difference in SOLIDWORKS 2018! Unfortunately it also looks like the current crop of AMD Radeon Pro cards doesn't quite keep up with the NVIDIA Quadro line, at least when dealing with such massive models. The good news, though, is that even with an assembly like the one we used for testing here you don't need to spend a ton: the Quadro P2000, which is no more expensive than a lot of the mainstream GeForce cards, was just as fast as the P4000 and P6000 that cost substantially more. As such, it is going to be our standard recommendation for SOLIDWORKS workstations.

As always, I look forward to reading your comments and hope that we can continue to improve our testing and analysis with your help.