Written on March 30, 2021 by William George
Share:
Table of Contents

In the grand scheme of all current CPUs, the new Intel 11th Gen Core processors perform quite well in Agisoft Metashape.

However, AMD's Ryzen 7 5800X beats them for roughly the same price; its MSRP of $449 puts it right between the $399 and $513 for Intel's Core i7 11700K and i9 11900K, respectively. Those wanting the absolute best performance in Metashape will want to stick with AMD's Ryzen 5000 Series, but for most users, any of these top-end Intel and AMD processors would do very nicely.

Intel has released their latest mainstream desktop CPU family, the 11th Gen Intel Core processors. These new processors are supposed to have substantially better per-core performance compared to their previous 10th Gen Core models, but the top-end model has two fewer cores than the previous generation as well. And while it is safe to assume that Intel will have surpassed their older CPUs with this launch, the real competition comes from AMD's Ryzen 5000 Series processors - which offer both more cores and higher per-core speeds than Intel's older chips. The only way to know where these CPUs truly stand is to test them in real-world applications, so this article will focus on how they all perform with photogrammetry in Agisoft Metashape. 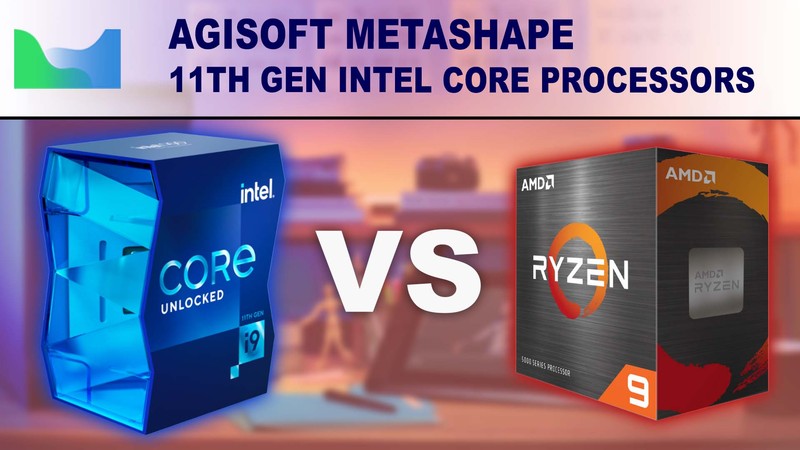 Please note that we ran all processors at stock settings for this round of testing, but we have found that high core count CPUs like AMD's Ryzen 9 models can perform even better in Metashape by turning off SMT.

One thing you will note is that we are using a Z490 motherboard for both the 10th and 11th Gen Intel CPUs. There is a newer Z590 chipset that is launching alongside the 11th Gen CPUs, but we unfortunately did not have access to a board early enough to make it into this article. We don't expect the chipset to make much of a performance difference, but we may revisit Z490 vs Z590 performance later on if our qualification process uncovers any reason to think using Z590 would improve CPU performance in this application.

In addition, the 11th Gen CPUs also support a new technology called "Intel Thermal Velocity Boost" which allows the CPUs to run at a slightly higher clock speed than Turbo Boost 2.0 or Turbo Boost 3.0 (and yes, those are independent) based on the CPU temperature and power draw. This feature is still in beta, however, so we opted not to use it in this round of testing.

To test each processor, we used our in-house Metashape benchmark - both the standard and extended versions. Each was run twice per CPU, and the best results were included in the charts below. Here is some basic info about the image sets in these projects:

Here are charts showing the overall per-project performance of the new 11th Gen Intel Core processors (in green) compared to the older 10th Gen and AMD's Ryzen 5000 Series (both in blue):

Intel's new 11th Gen Core processors do fairly well in Metashape, but don't quite unseat AMD's Ryzen 7 5800X from its top performance spot. Moreover, we've seen in other articles that AMD's higher core count Ryzen 9 chips can beat the 5800X if SMT is disabled, but these new 8-core chips from Intel are unlikely to see any substantial improvement from turning off Hyperthreading.

There is also the odd outlier of our School Model test, which puts the CPUs with more cores in the lead even without SMT turned off. Users who work on large 3D models, rather than maps, will want to take notice of that when selecting what processor to purchase.

For those interested in a detailed breakdown of per-step processing speeds, here is a full table of the results: 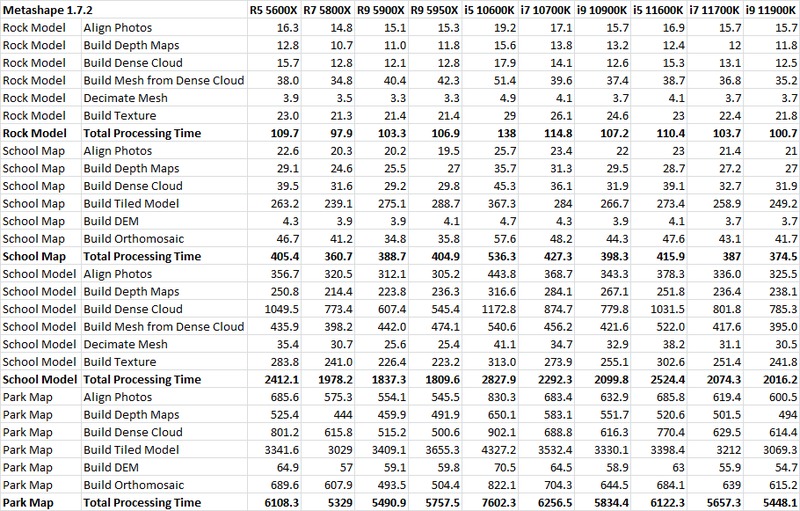 It is also worth noting that Intel did manage a substantial gain in performance with these new CPUs, compared to the preceding models. Here is a chart showing just the generational improvement from Intel's Core 10th Gen to 11th Gem, to help visualize this difference: 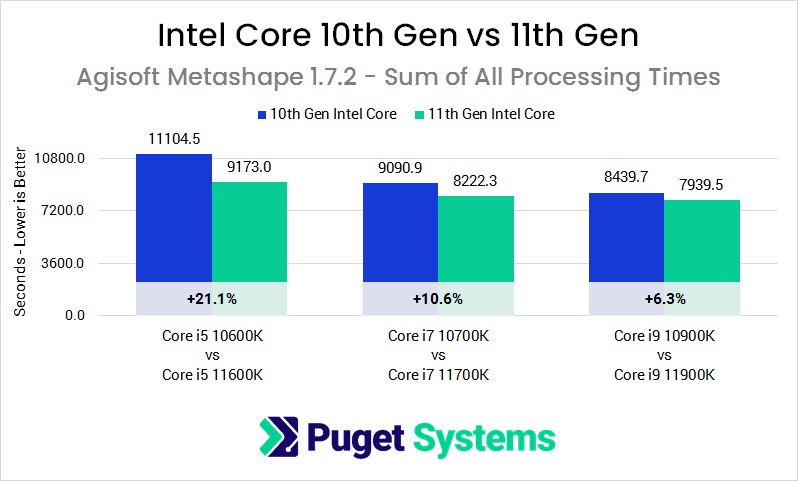 In the grand scheme of all currently-available CPUs, yes - the new Intel 11th Gen Core processors score near the top in Agisoft Metashape. However, AMD's Ryzen 7 5800X beats them for roughly the same price; its MSRP of $449 puts it right between the $399 and $513 for Intel's Core i7 11700K and i9 11900K, respectively. Those wanting the absolute best performance in Metashape will want to stick with AMD's Ryzen 5000 Series, but for most users, any of these top-end Intel and AMD processors would do very nicely.

Are there results when using multiple GPUs? or even network rendering?

We've done multi-GPU testing in Metashape a couple of times, I think this is the most recent article about it:

Hi, thanks a lot for this new test !
But you use a very small model project : 439 photos at 18 megapixels each

My projects use between 2000 and 3000 photos at 60 megapixels each... I would love to see the benchmark results with this kind of project.

Wondering if using a 256mb ram Threadripper system would be a lot faster than my 128mb 5950x system ?

one issue on such projects is the video memory: i have two pc, one with 3080 and the other with the 3090. Very often the 3080 can't handle the projects because of it's smaller memory.

Could you use a bigger model project next time ?

Our largest image set is closer to 800 photos, but you are quite correct that many folks are dealing with real-world projects that are much, much larger. There are several problems with benchmarking such a massive job, though:

- Sourcing a high-quality image set of that complexity
- The processing times involved (we usually want to test several CPUs and/or GPUs for each article, so tests that are longer than a few hours become untenable)
- Distributing project files for readers to run the benchmark themselves (both in terms of the storage of the files on our side, and the big downloads for users who may not have the fastest internet connection)

Moreover, we have done some internal spot testing with larger projects for a couple of specific customers - and in general, map-style image sets with 1,000s of photos tend to perform the same as our big ~800 image project. That seems to be large enough to demonstrate hardware differences, though it doesn't uncover things like how much RAM (or VRAM) a given project might need. Memory needs are impacted by image count, photo resolution, and project quality settings... so the best bet there is to just look at memory usage during your processing and see how much is needed :/

thanks for your reply. if you want me to provide you with a larger set let me know.
but you are right it means few days instead of few hours to process. Maybe just on the most powerful cpu of each range to see if they behave differently with massive project.

I appreciate that offer, and may reach out at some point if we have need to do that sort of extended testing :)