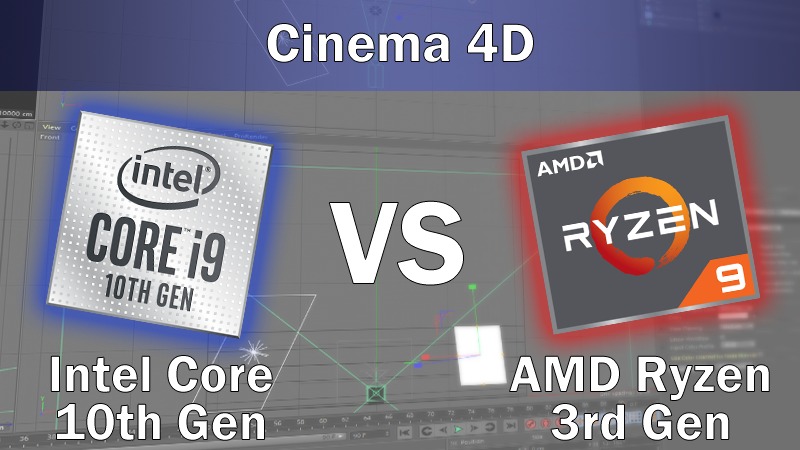 For this article, we are focusing on how the new Intel 10th Gen Core processors compare to other currently-available models and the preceding 9th-gen Core series. The focus is on CPU-based rendering performance in Cinema 4D, so we are using Maxon's free Cinebench R15 and R20 benchmarks. More info about these tools and how we use them are available in the Benchmark Details.

The primary focus of Cinebench is on measuring system performance using the default CPU-based renderer in Cinema 4D. By default, all cores / threads a CPU has are utilized - but there is an option to run the test on a single core as well. To try and paint a more complete picture of performance, without taking too long for the tests to run, we use the only multi-threaded portion of Cinebench R20... but then run both multi- and single-core modes on Cinebench R15. That older version runs a lot faster, and the single-threaded test it does can still give a good indication of how CPUs will compare when running applications that only use one core at a time.

There are a lot of processors in this round-up, so we are color coding the results to make them easier to sift through:

Intel has measurably improved both single-threaded and multi-threaded performance compared to their previous generation, with the Core i9 10900K coming in about 5% faster when just one core is active in Cinebench R15 and 15-25% faster when all the cores are working. The high clock speeds on that particular model make it even faster than the Core X-series i9 10900X.

However, AMD's Ryzen processors pack as many or more cores at a similar price - along with far higher core counts in their Threadripper line. With how well threaded CPU-based rendering is, that leaves AMD in the lead at pretty much every price point.

Single-core performance still matters in Cinema 4D, though, as modeling, animation, and the basic physics simulations present within the application are all single-threaded. When it comes to that aspect of performance, the new 10th Gen Intel Core CPUs do lead the pack. All of the processors we tested are within a 15% spread in this regard, though, so you can't really go wrong with any of them.

When it comes to rendering within Cinema 4D, AMD still offers more cores -- and thus more overall processing power -- for your money. At similar price points, AMD's Ryzen 9 3900X beats the new Intel Core i9 10900K while the Ryzen 7 3800X beats the Core i7 10700K. If you have more money to spend then the 3950X is even better, and AMD's Threadripper CPUs have so many cores that they dwarf all other single-socket options.