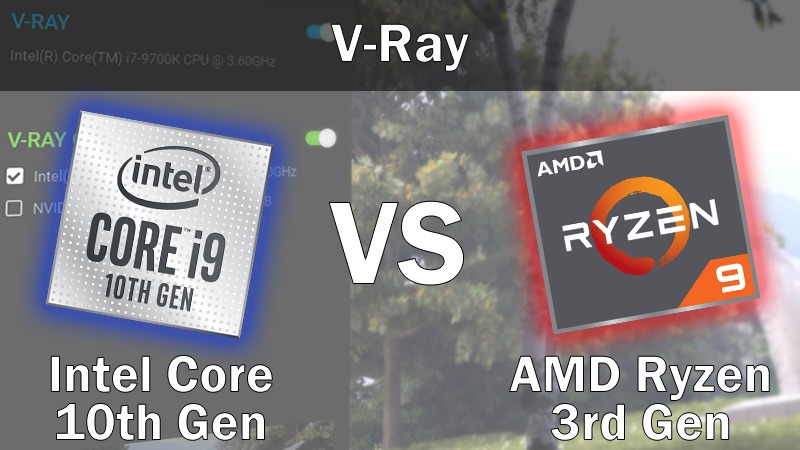 For this article, we are focusing on how the new Intel 10th Gen Core processors compare to other currently-available models and the preceding 9th-gen Core series. The focus is on CPU-based rendering performance in V-Ray, so we are using Chaos Group's free V-Ray and V-Ray Next benchmarks. More info about these tools and how we use them are available in the Benchmark Details.

We also took a look at Cinema 4D in another article, for those who use the native C4D renderer or care about modeling too.

The V-Ray Next Benchmark measures system performance using both the CPU and GPU rendering pipelines. We aren't concerned with GPU performance in this article, so results depending exclusively on video cards have been omitted. However, in V-Ray Next the CPU can contribute to performance even in the GPU-based renderer - so to judge how these processors compare in that situation, we have included the CPU's contribution to that score (after removing the GPU's portion). We also still use the previous version of V-Ray Benchmark as an additional comparison point, but again exclude the GPU side of things.

On the V-Ray Next GPU Mode chart, a GeForce RTX 2080 Ti is also included (in green) as a reference point to show how these CPUs compare to a video card in that rendering pipeline.

Intel has measurably improved rendering performance compared to their previous generation, with the Core i9 10900K coming in about 20% faster in V-Ray than the i9 9900K it is replacing - and even rivaling or beating the Core X series i9 10900X. Similarly, the new Core i7 10700K roundly beats the i7 9700K and matches the performance of the i9 9900K at a lower price point.

However, AMD's Ryzen processors pack as many or more cores at a similar price - along with far higher core counts in their high-end desktop Threadripper line. With how well threaded CPU-based rendering is, that leaves AMD in the lead at most price points... except for ~$400, where the Core i7 10700K and Ryzen 7 3800X appear to be on pretty equal footing.

When it comes to CPU-based rendering in V-Ray, the core count in processors is a huge factor - and AMD offers more cores for your money at most price points. A great example of this is how AMD's Ryzen 9 3900X 12-core beats the new Intel Core i9 10900K 10-core for roughly the same price. However, there is a spot where AMD and Intel are on equal footing: the Ryzen 7 3800X and Core i7 10700K are both 8-core models and are effectively tied in V-Ray.

In the grand scheme of things, though, these are all fairly slow processors for V-Ray. Most folks with workflows that involve a lot of rendering will want to spend more to get up to the level of the Ryzen 9 3950X or, better yet, any of AMD's 3rd Gen Threadripper CPUs. Using a GPU-accelerated engine can also improve render speeds, and we have many articles looking at performance in them as well.