Skip to content
Always look at the date when you read an article. Some of the content in this article is most likely out of date, as it was written on February 8, 2018. For newer information, see our more recent articles.

Software developers are often very closed-lipped and secretive with patches and updates before they go live, but the Lightroom team at Adobe has given us the go-ahead to publish some benchmark results for the upcoming 7.2 update to Lightroom Classic CC. To be clear, at the time this article was published this build is not available for public download (so don't go hitting refresh on the Creative Cloud app) but it should be available soon. 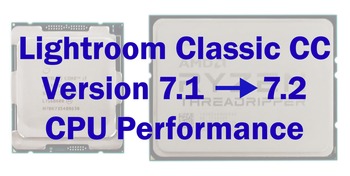 Since we are testing with a non-public update, there are unfortunately no published update notes quite yet. There should be at launch, but one thing we can tell you is that based on our testing this new version improves performance dramatically – especially with higher core count CPUs. Like always, the tasks we will be testing in this article are:

Listed below are the three test platforms we will be using in our testing. We opted to test a number of modern platforms along with a wide range of CPU architectures and core counts. 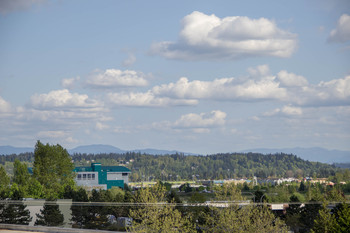 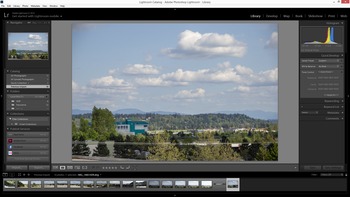 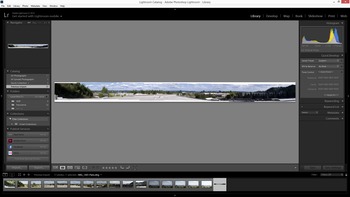 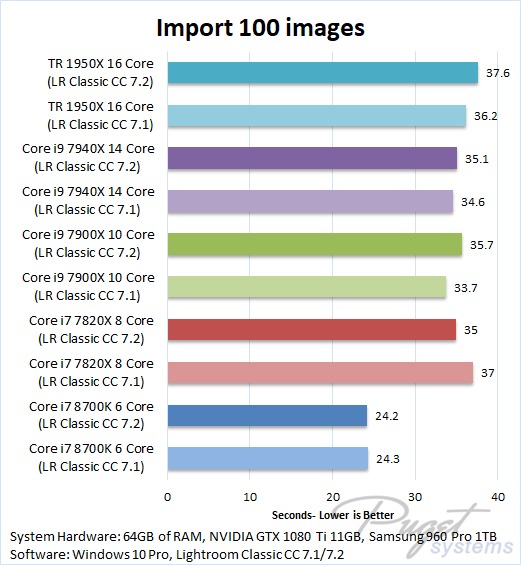 Since importing images is typically the first thing you do, we thought that this would be a good place to start our testing. Overall, this test is not very interesting with minimal difference in performance between the two versions.

One thing we do want to make sure is clear is that this test is measuring the time it takes to both copy images off a USB device and add to the Lightroom catalog. So technically this is not a straight import test. In future tests, we are planning on solely testing the time it takes to import images that are already on the local drive since using a USB device introduces a number of variables that can affect performance. 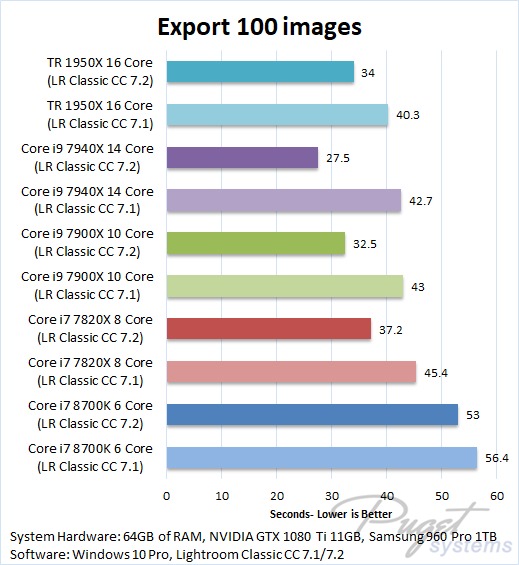 Exporting images is an area where we have expected Adobe to make improvements for a while now but the initial release of Lightroom Classic CC didn't give us quite what we were hoping for. The 7.2 update, however, delivered in spades. The lower core count CPUs like the Core i7 8700K and Core i7 7820X only saw a marginal 6% and 22% increase in performance respectively, but the higher core count CPUs (especially the Intel CPUs) saw huge performance gains.

For the higher core count CPUs, the Intel Core i9 7900X about a 32% increase in performance while the Intel Core i9 7940X saw a terrific 55% increase. This is a pretty absurd performance improvement and for users that export a huge amount of images may finally make higher core count CPUs (especially those from Intel) worth the investment. Unfortunately, the AMD Threadripper 1950X didn't get as much of a boost as we expected, coming in at just 19% faster in the new version. 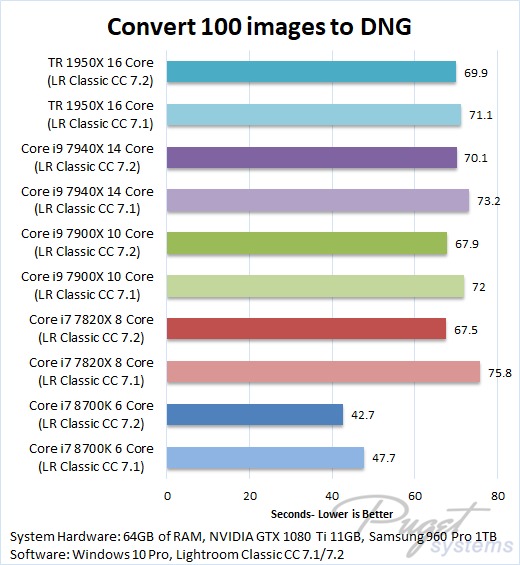 The results for converting RAW images to DNG is not nearly as exciting as the exporting results, but there was still a small performance gain across the board. This time, however, the lower core count CPUs were the ones that saw the biggest performance gain. 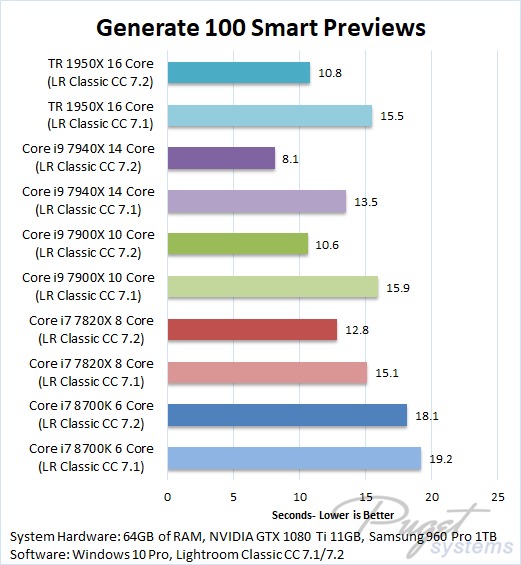 When Lightroom Classic CC was first launched, Smart Preview generation was one area that saw a large performance increase. Apparently, there was still plenty of room for improvement as we saw even better performance in the new 7.2 update. Interestingly, the performance gains appears to be focused around multi-core performance as the higher core count CPUs are the ones that saw the largest benefit. Where the Core i7 8700K 6 Core only saw a 6% increase, the Core i7 7820X 8 Core was 18% faster in the new update. Even better, the Core i9 7900X 10 Core and Core i9 7940X 14 Core saw a 50% and 67% performance improvement respectively.

One trend that we are starting to see is that while the AMD Threadripper 1950X 16 core is definitely faster with the new version of Lightroom Classic CC, the performance gain is not as large as what we are seeing with the Intel CPUs as it is only 44% faster. 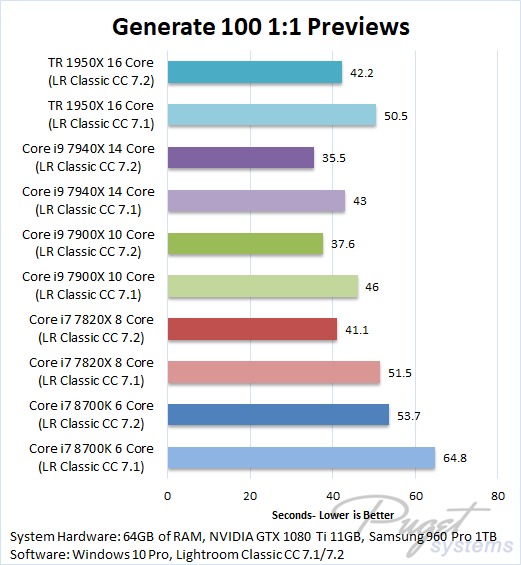 While generating 1:1 Previews is faster in the new update, unlike exporting and generating Smart Previews the performance gain was pretty consistent across all the CPUs we tested. There was of course some variance, but overall each CPU saw between a 20% and 25% performance improvement. 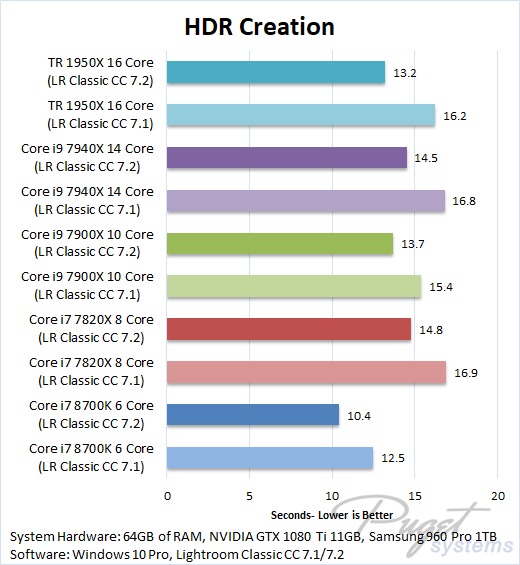 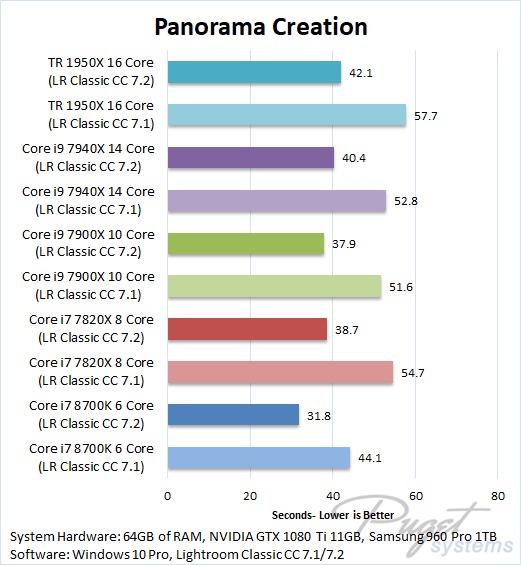 Wrapping up our testing is creating Panorama images, which is pretty significantly faster in the new 7.2 update. There is still no additional benefit to having a high core count CPU for generating Panoramas, but we did see a great 30-40% performance improvement across all the CPUs we tested.

Starting with Lightroom Classic CC and continuing in the new 7.2 update, one thing is very clear: the Lightroom developers are focusing heavily on improving performance. To get a broad overview, lets take a look at each task we tested to see how the new 7.2 update compares to the previous version: 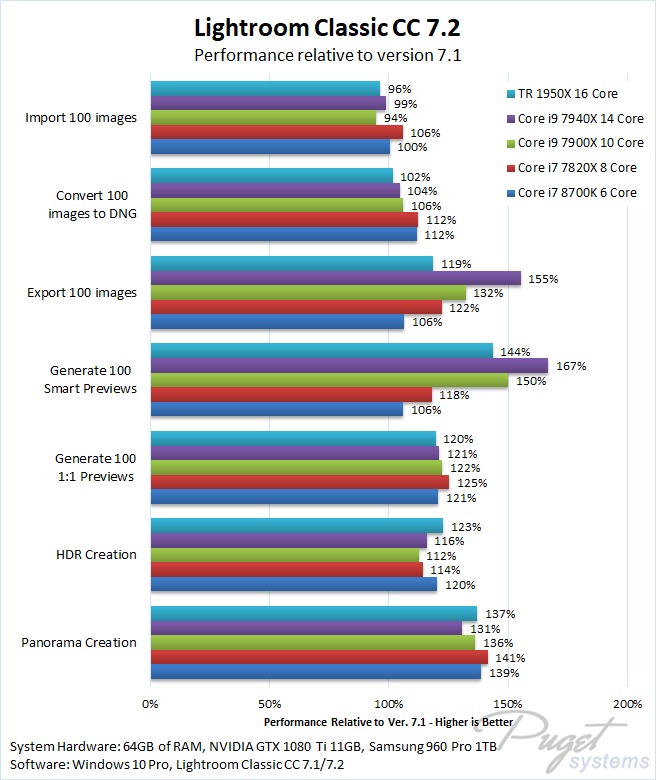 Overall, the performance gains in the new 7.2 version of Lightroom Classic CC can be split into three categories:

This new update is substantial enough that it will likely influence what CPU you would use in a new workstation for Lightroom Classic CC. If your workflow involves heavily modifying a small number of photographs then the Core i7 8700K is likely still the best CPU choice, but if you export a large number of images then investing in a higher core count CPU may be worth it. 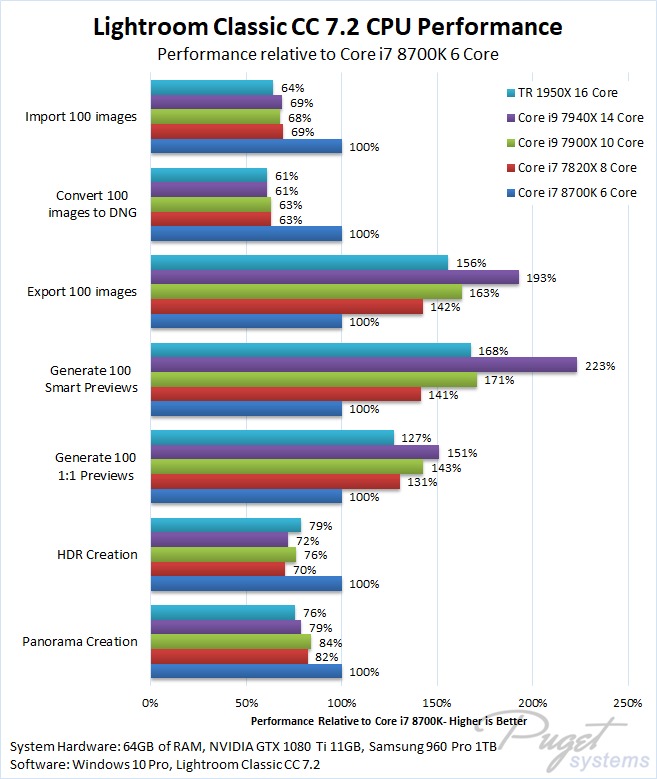 As we stated earlier, for most Lightroom users the Core i7 8700K is still the best overall CPU choice as it gives great performance in a wide variety of tasks. However, this new 7.2 update is a huge boon for users that work with large numbers of photographs. While an Intel Core i9 7900X or 7940X is certainly an investment, being able to export hundreds or thousands of images twice as fast as you can with a Core i7 8700K could be a massive time savings for some users.