Skip to content
Always look at the date when you read an article. Some of the content in this article is most likely out of date, as it was written on February 9, 2018. For newer information, see our more recent articles.

The NVIDIA Titan V 12GB is the latest in NVIDIA's Titan line of GPUs and while the $3,000 price tag is pretty steep, it has a number of features that makes it very unique. The two most interesting being full-speed FP64 (double precision) performance and the addition of 640 "Tensor" cores. These special cores are designed specifically for use in machine learning, but both they and the FP64 performance unfortunately has no bearing on performance in software like DaVinci Resolve.

This doesn't make the Titan V a dud, however. This card also features HBM2 memory (which is faster than the GDDR5/GDDR5X VRAM found on most cards) and has more CUDA cores than any other GTX or Titan GPU. In fact, it has 5120 CUDA cores while the Titan Xp and GTX 1080 Ti only have 3840 and 3584 CUDA cores respectively. One thing to note is that while the higher number of cores gives the Titan V a theoretical higher performance ceiling than any other GTX or Titan video card, each individual core in the Titan V is actually slower than the cores in cards like the GTX 1080 Ti or Titan Xp. So just like how a CPU with more cores is not always better, there is a chance that the lower frequency of the Titan V holds it back from being a top pick for software like DaVinci Resolve. 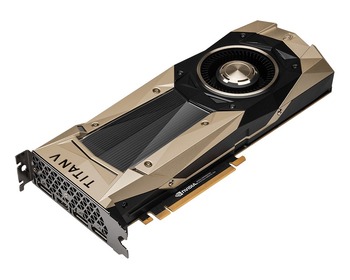 To find out, we will be looking at how this card performs in a number of realistic situations using our newly updated DaVinci Resolve testing process. This new process is not vastly different than our old testing, but simply focuses on a wider range of codecs and has more in-depth Live Playback testing that more accurately reflects real-world workflows. Thanks to all our customers and readers who gave us feedback on our previous articles!

One thing we do want to note is that we will only be looking at single GPU performance in this article. We fully intend on testing dual, triple, and quad GPU setups in the near future, but there is currently a severe GPU shortage and every GPU we get is going directly into customer workstations. Once supply improves a bit, we will publish a follow-up article looking at the Titan V (and other video cards) in multi-GPU setups.

Titan V GPU Scaling Article Available. We now have benchmarks available looking at the performance of the Titan V in 1-4 GPU configurations in our DaVinci Resolve 14 GPU Scaling: Core i9 vs Xeon W vs Dual Xeon SP article.

To see how the Titan V performs in DaVinci Resolve, we opted to pair a number of different GPUs with the Intel Core i9 7960X CPU which – based on our previous testing – is the fastest all-around CPU for Resolve. Our full test platform consists of the following hardware:

To act as comparison points, we will be testing a number of NVIDIA GPUs ranging from the Titan V all the way down to the GTX 1060:

For those that read our previous articles, you will notice that our testing looks a bit different since we just recently updated our entire testing process for DaVinci Resolve based on feedback from our customers and readers. The first change is that we are now testing a wider range of codecs using media that is either publicly available for download or transcoded from media that is publicly available. This was done so that anyone can repeat our testing in order to both verify our findings and to see how their current computer stacks up to the latest hardware available.

In addition to changing our test media, we also adjusted the different "levels" of color correction. The lowest level is simply a basic correction using the color wheels plus 4 Power Window nodes that include motion tracking. The next level up is the same adjustments but with the addition of 3 OpenFX nodes: Lens Flare, Tilt-Shift Blur, and Sharpen. The final level has all of the previous nodes plus one TNR node.

For all the RAW footage we tested (CinemaDNG, ARRIRAW, and RED), we not only tested with the RAW decode quality set to "Full Res" but we also tested at "Half Res" ("Half Reg Good" for the RED footage) and "Quarter Res". Full resolution decoding should show the largest performance delta between the different GPUs, but we also want to see what kind of FPS increase you might see by running at a lower decode resolution with the different video cards.

While this is by no means every codec available, we do feel that this covers a much wider range than our previous testing. In the future we may cut down on the number of RED clips and replace then with something like XAVC-S or AVCHD but for this round of testing we really wanted to see how the different compression levels impact performance.

Live playback performance is a challenge to accurately test since performance depends not only on the codec and resolution of your media, but also the number of nodes you use, the effects you have applied, and even the decode resolution when using RAW footage. Since this is the first full round of testing with our new benchmark process, we decided to benchmark all our test media with not only three different "levels" of corrections, but also with the RAW footage at full, half, and quarter playback resolution. For more information on each test media and timeline, check out the Test Hardware & Methodology section. And as always, we welcome any suggestions for future testing in the comments section. 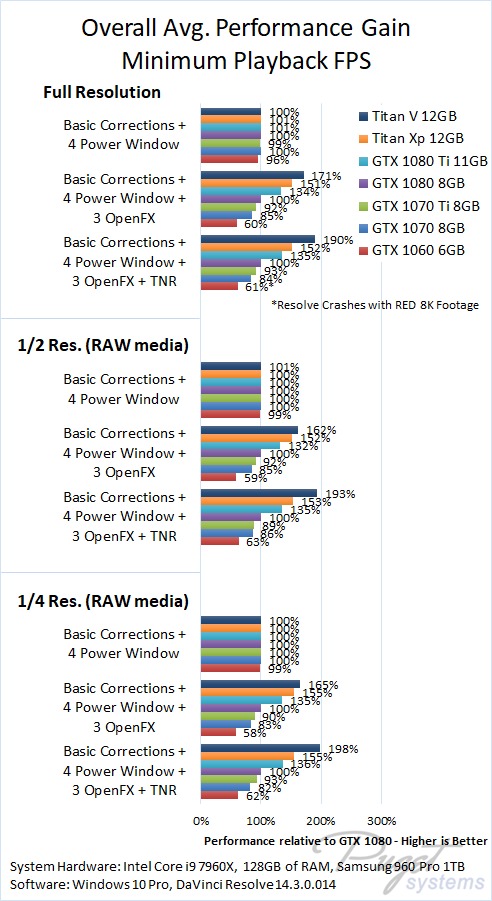 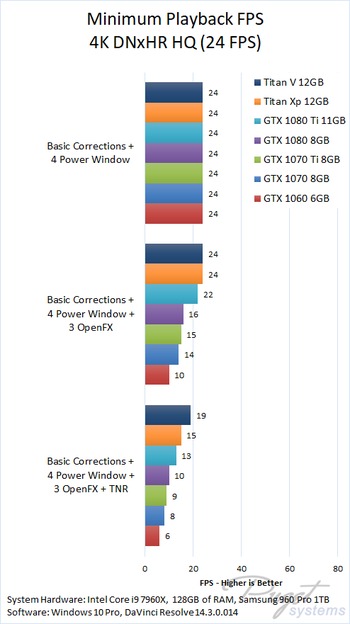 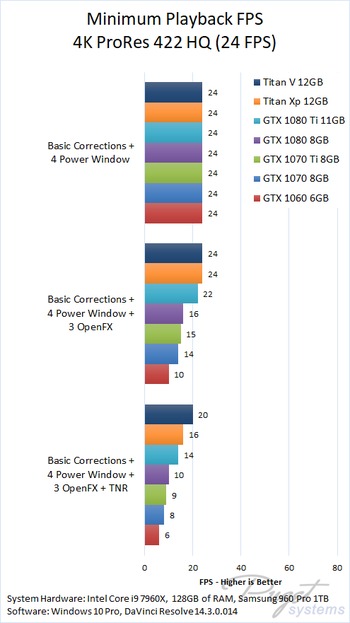 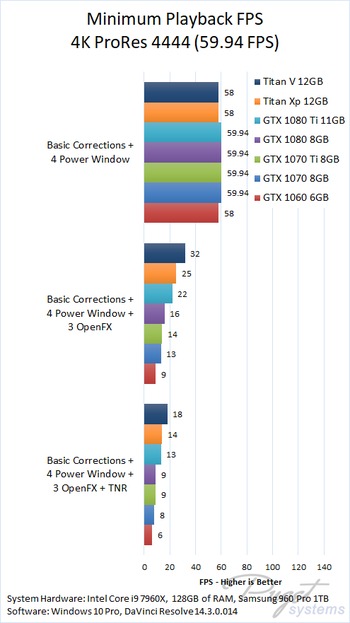 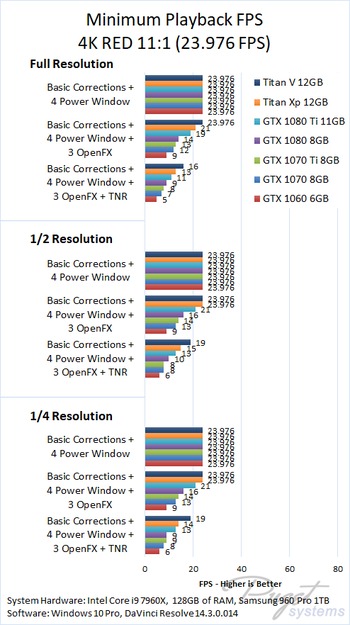 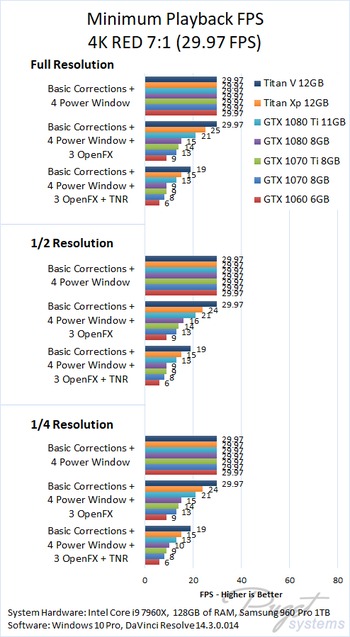 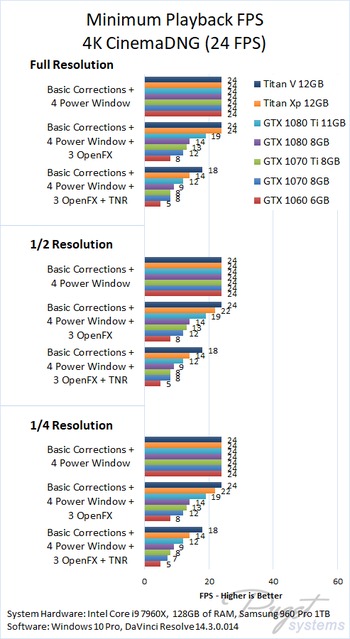 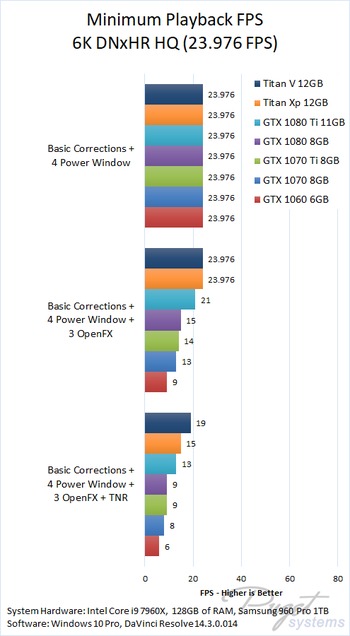 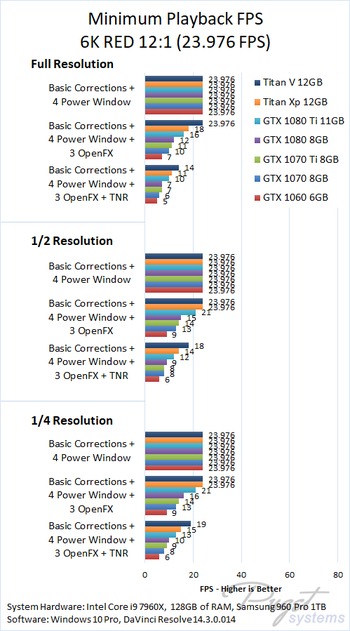 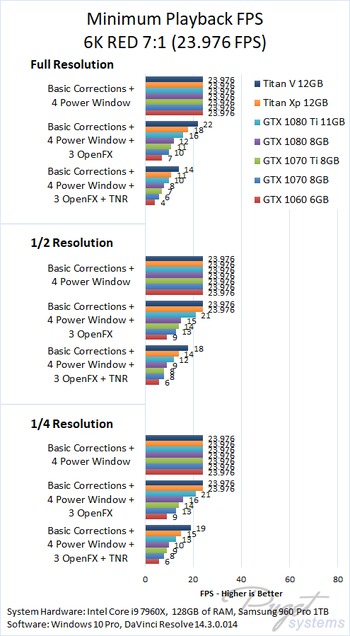 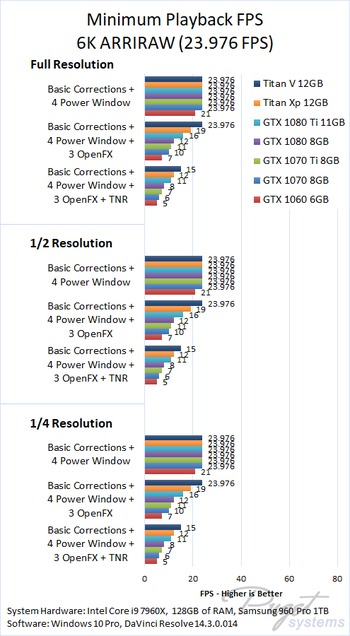 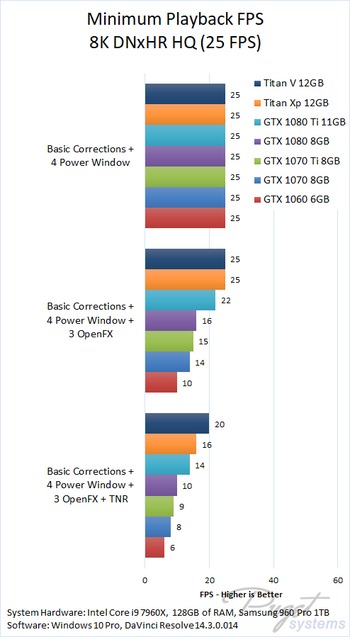 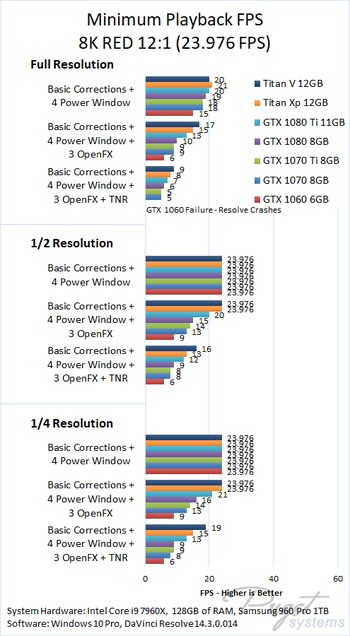 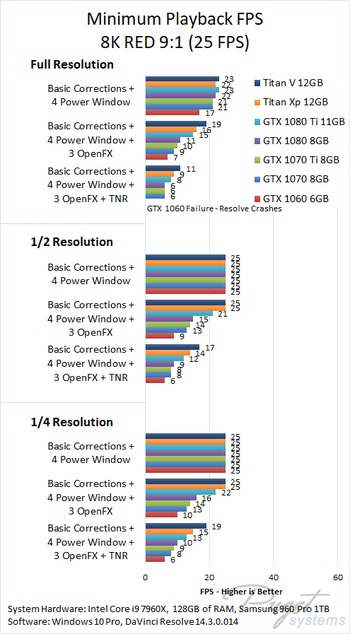 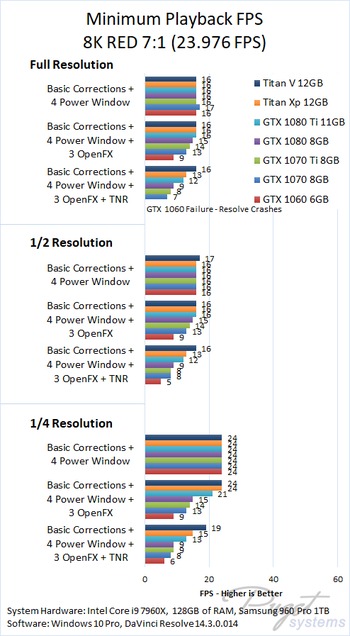 Due to the huge amount of data gathered in our testing (over 650 different data points in total!), we are not going to go through everything point by point. If we tested a codec you typically work with, we highly recommend looking at the "Individual Avg. FPS Results" charts to see exactly what FPS each card was able to achieve with that type of media. However, for a general overview of how each GPU performed we decided to average the results relative to a GTX 1080 8GB video card.

There are a number of very interesting results to talk about, but the first thing we want to point out is that the decode resolution for RAW media actually has little impact on the relative performance difference between each GPU model. We certainly saw higher overall FPS results at lower decode resolutions (especially with 8K media) but the percentage of FPS increase was relatively stable.

As for actual GPU performance, with basic color corrections (via the color wheels) and four power windows with similar corrections, we actually didn't see much difference between the different GPU models. The GTX 1060 was slightly slower than the other cards, but overall if you are just using Resolve for basic color grading then a mid-range GPU should work just fine.

As soon as you start getting into more complex workflows with things like OpenFX or TNR, however, the GPU can make a massive difference. In these heavier workloads, each subsequent model of GPU provides better and better performance. Anyone doing this type of work shouldn't even consider using a GTX 1060 (which actually caused Resolve to crash when trying to use TNR on RED 8K media), but even going from the very solid GTX 1080 to a GTX 1080 Ti can often give a healthy 5-6 FPS bump. Upgrading to a Titan Xp can give you another few FPS (especially with 6K and 8K footage) while the new Titan V sits at the very top providing the best possible performance in Resolve from a single GPU. 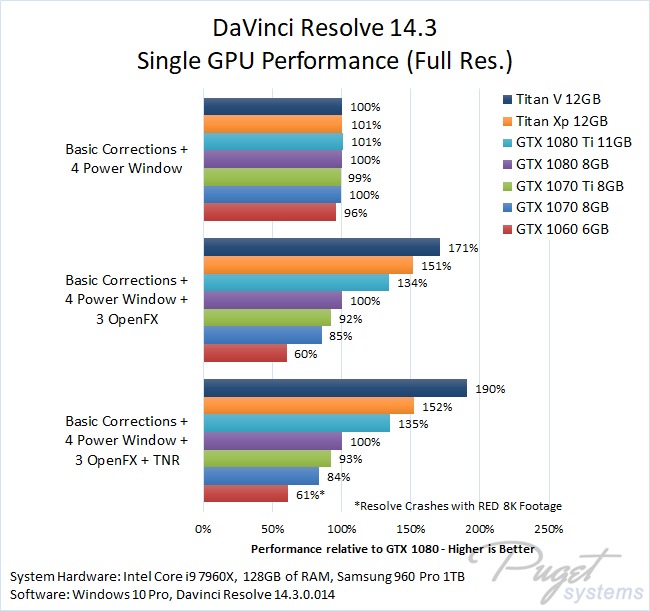 Looking at just the results with full decode resolution (when available), we get a pretty good idea about how the Titan V stacks up against the other video cards. Frankly, the Titan V is amazing. Expensive at a retail cost of $3,000…but amazing.

Of course, we will freely admit that this testing is only half the picture. Most professional Resolve users are going to be heavily considering a workstation with multiple video cards and it is very likely that two or three GTX 1080 Ti cards will out-perform a single Titan V at a lower cost. This is certainly something we will be looking into as soon as the current GPU shortage lightens up. At the moment, nearly all our GPUs are being immediately allocated for customer machines but once we are able to procure four GTX 1080Ti, Titan Xp, and Titan V cards we will repeat this testing all the way up to quad GPU configurations. Unfortunately we cannot give an accurate timeline on when that testing will be complete but we will get it done as soon as we are able.

Even without multi-GPU testing completed yet, it is clear that the Titan V is a terrific card for those that can justify the cost. If the scaling holds up, the performance possible with four of them in a single workstation is going to be nothing short of amazing.