Skip to content
Always look at the date when you read an article. Some of the content in this article is most likely out of date, as it was written on July 26, 2018. For newer information, see our more recent articles.

For a Photoshop workstation, the GPU is typically relatively low on the priority list falling behind the CPU, RAM, and storage. While GPU acceleration has become fairly common in Adobe applications, only a select number of tasks in Photoshop are able to take advantage of the video card to improve performance and often a mid-range consumer GPU is more than adequate. However, many are forced into using a more expensive workstation-class video card as that is currently the only way to display true 10-bit color in Photoshop (and many other professional applications) to a compatible display. Given the much higher cost of workstation GPUs, it is even more important to ensure that you are purchasing the right card for your needs. To help you decide which GPU you should use, in this article we will be looking at a number of NVIDIA Quadro and AMD Radeon Pro cards to evaluate how they perform in Photoshop CC 2018.

It is worth noting that while we will only be looking at Photoshop performance in this article, choosing a specific GPU to use is a much more complicated topic. Many other factors including price, reliability, power draw, and noise level are all things that need to be considered.

To compare AMD and NVIDIA, we tested a wide range of cards as well as the integrated Intel HD 630 that is built into the Core i7 8700K to act as an additional comparison point. 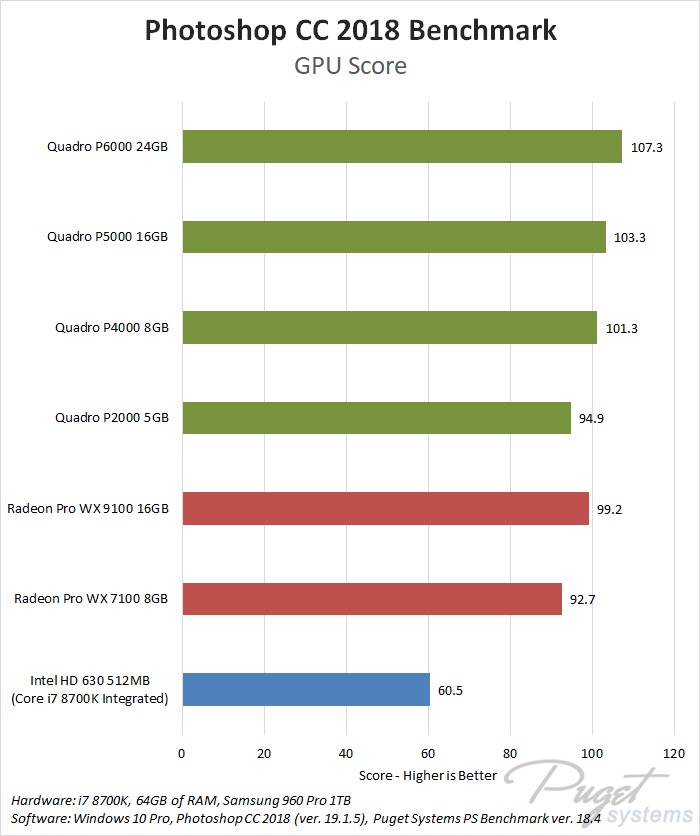 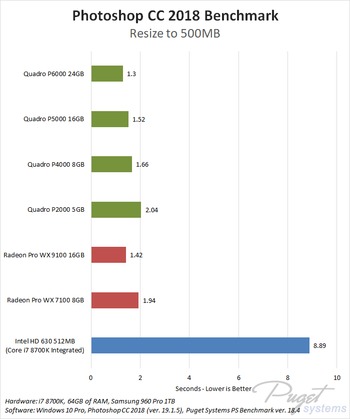 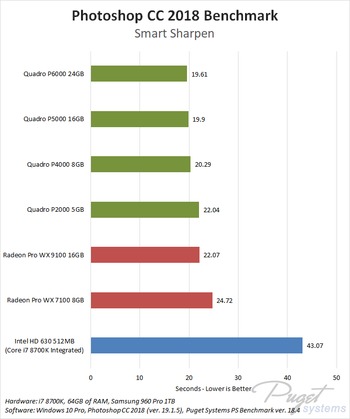 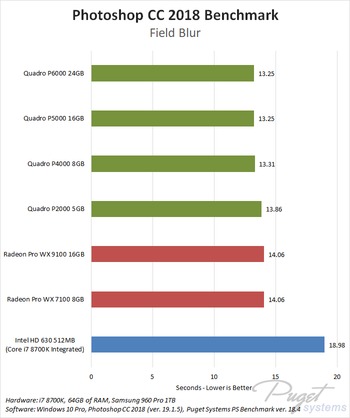 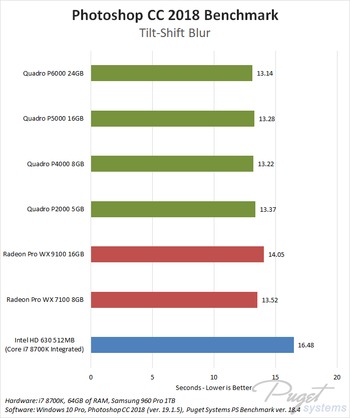 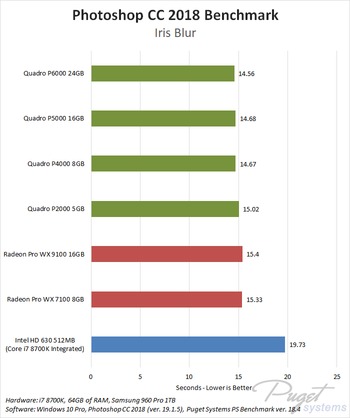 Our Photoshop Benchmark includes a large number of tasks that don't utilize the GPU, but there are five tasks in the benchmark that should show a benefit to having a more powerful GPU. These results are used to calculate the "GPU Score" portion of our benchmark which does a great job at showing the relative performance difference between each card in a more general sense.

As you might expect if you have read any of our previous articles looking at GPU performance in Photoshop, there is not a massive difference between each card. While pricing varies widely based on numerous factors such as sales or special deals, in general you can think of the following very rough price parity:

Using these as comparison points, we saw very little performance difference between the AMD Radeon Pro and the NVIDIA Quadro cards. Quadro was slightly faster on average by about 2 to 4%, but that is likely too small to be noticed in the real world.

However, one thing that leans things a bit more in NVIDIA's favor is something that we also saw in our Photoshop CC 2018 NVIDIA GeForce vs AMD Radeon Vega testing that looked at the consumer versions of these cards. In both of these tests, there was one task (Adaptive Wide Angle) that isn't supposed to utilize the GPU, but we saw much lower performance with the AMD cards: 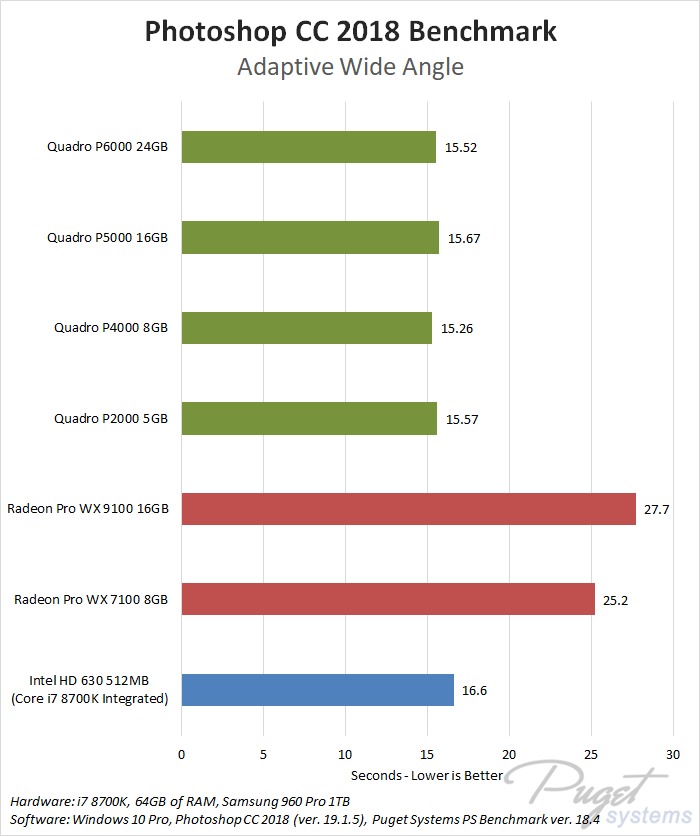 We don't know why the AMD cards did so poorly in this test or why the WX 9100 was worse than the WX 7100, but we re-ran the test multiple times and the result was very consistent. As far as we could find, this task is not supposed to utilize the GPU which is backed up by the fact that the Intel HD 630 integrated graphics was just a hair slower than any of the NVIDIA cards. At the moment, we are willing to chalk this up to a driver bug, but we wanted to point it out since it was something we didn't expect to see.

If you need a workstation GPU for Photoshop in order to get 10-bit color support, you likely won't notice too much of a difference going with either an NVIDIA Quadro or an AMD Radeon Pro video card. In terms of pure performance, an NVIDIA Quadro card should give you about 2-4% better performance for your dollar, but that is small enough that you are very unlikely to notice the difference in real life. Due to this, we would advise using NVIDIA Quadro if you are on the fence, but AMD fans can happily use a Radeon Pro without worrying too much about giving up any noticeable performance.