While GPU acceleration has become fairly common in Adobe applications, only a select number of tasks in Photoshop are able to take advantage of the video card to improve performance. Even for these tasks, there is usually no reason to invest in an extremely expensive video card - a mid range card like a GTX 1060 tends to only be slightly slower than a high end card like the GTX 1080 Ti. Despite this, a popular request we get is to compare AMD's Radeon Vega video cards to NVIDIA's GeForce cards. It is worth noting that while we will only be looking at Photoshop performance in this article, choosing a specific GPU to use is a much more complicated topic. Many other factors including price, reliability, power draw, noise level, and available cooler designs are all things that need to be considered.

To compare AMD and NVIDIA, we tested a wide range of cards as well as the integrated Intel HD 630 that is built into the Core i7 8700K to act as an additional comparison point. We do want to point out that at the time we did this testing, it was difficult to source a quality AMD Radeon Vega card that was not factory overclocked. Rather than delaying our testing we decided to go ahead and use the overclocked cards even though it will slightly skew the results in favor of those cards. 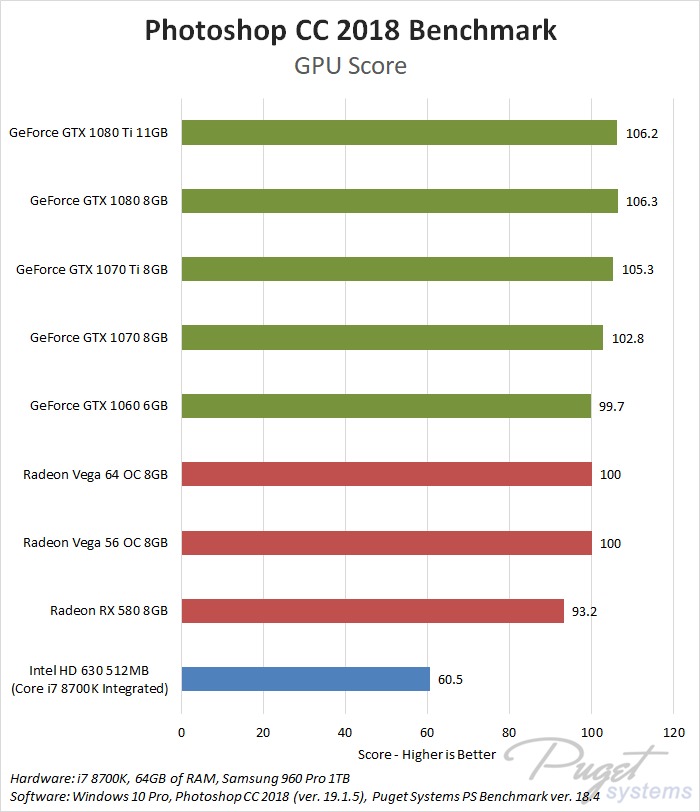 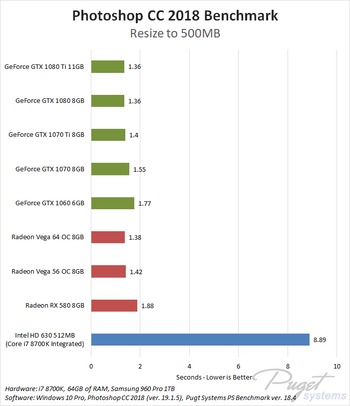 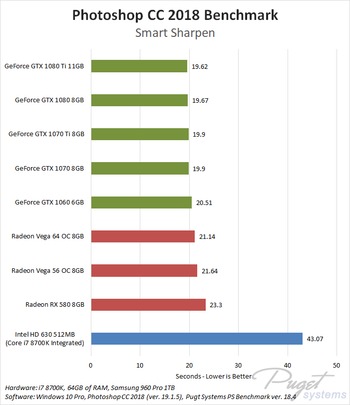 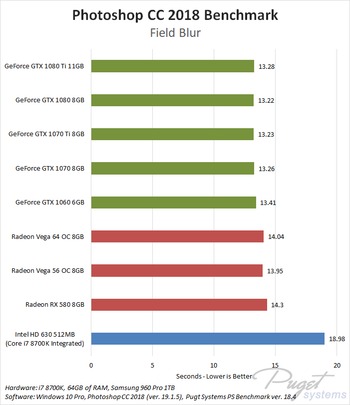 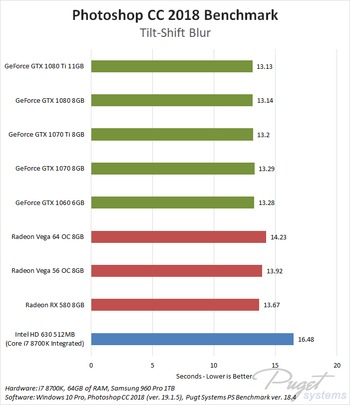 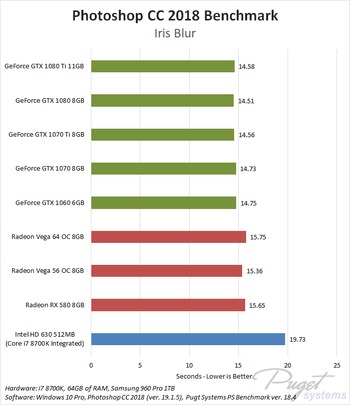 Our Photoshop Benchmark includes a large number of tasks that don't utilize the GPU, but there are five tasks in our benchmark that should show a benefit to having a more powerful GPU. These results are used to calculate the "GPU Score" portion of our benchmark which does a great job at showing the relative performance difference between each card in a more general sense.

As you might expect if you have read any of our previous articles looking at GPU performance in Photoshop, there is not a massive difference between each card. However, for the GPU accelerated tasks there is a clear performance advantage when using NVIDIA GeForce cards. While pricing varies widely based on numerous factors like sales or the popularity of bitcoin mining, in general you can think of the following rough price parity:

Using these as comparison points, we see roughly a 6% performance advantage with NVIDIA GeForce over the AMD Radeon cards. This is often less than a second or two difference, but as we mentioned earlier you also need to consider the reliability, availability, power draw, noise level, etc. - most of which are also in favor of NVIDIA at the moment. in addition, keep in mind that this is testing overclocked Vega cards against stock GeForce cards.

Something else we want to specifically call out is that since we ran our full Photoshop Benchmark, we have results from a number of tasks that are not supposed to utilize the GPU in any significant way. What was interesting is that for one task (Adaptive Wide Angle) we saw much lower performance with the AMD Radeon cards even compared to the Intel HD 630 integrated graphics: 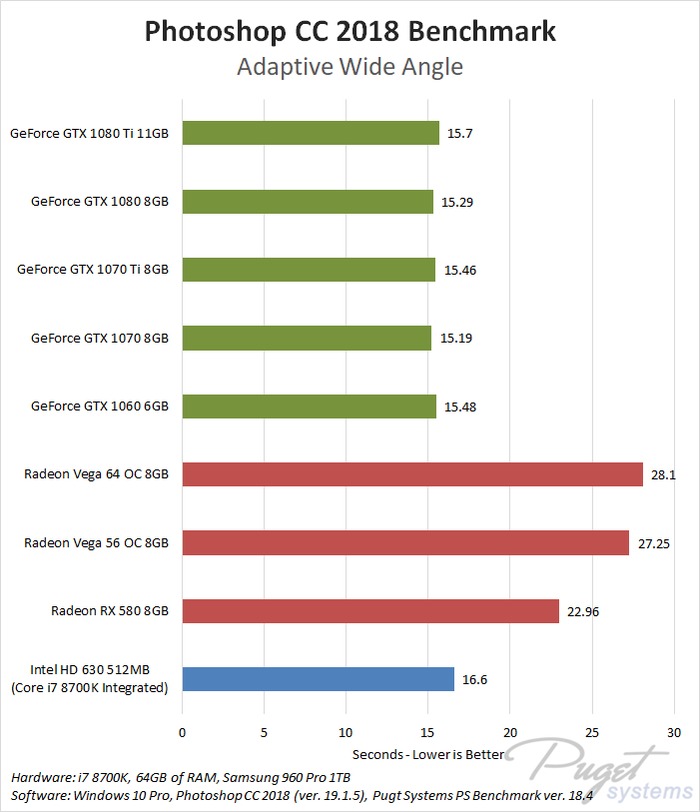 We don't know why the AMD cards did so poorly in this test or why the Vega cards did worse than the RX 580, but we re-ran the test multiple times and the result was very consistent. As far as we could find, this task is not supposed to utilize the GPU which is backed up by the fact that the Intel HD 630 integrated graphics was just a hair slower than any of the NVIDIA GeForce GTX cards. At the moment, we are willing to chalk this up to some driver bug, but we wanted to point it out since it was something we didn't expect to see.

Photoshop is relatively light in the way of GPU acceleration, but based on our benchmark testing we saw a very clear (albeit small) advantage to using NVIDIA GeForce cards over AMD Radeon in Photoshop. Choosing the right GPU for Photoshop isn't nearly as important as choosing the right CPU or having enough RAM, but at similar price points you should see roughly ~6% higher performance in GPU accelerated tasks by using NVIDIA GeForce - not to mention the lower power draw which means less heat and noise with those NVIDIA cards.