Skip to content
Always look at the date when you read an article. Some of the content in this article is most likely out of date, as it was written on July 30, 2018. For newer information, see our more recent articles.

While GPU acceleration has become fairly common in Adobe applications, Media Encoder is interesting since it is used in two very different ways. The first is to encode a finished or in-progress project that was made in an application like Premiere Pro or After Effects. The second is to simply transcode a clip from one codec/resolution to another. This is done for a variety of reasons, but in the end this type of work is going to be largely CPU-dependent since straight decoding/encoding does not (typically) take advantage of the GPU.

In this article, we will be looking at the use of Media Encoder as a straight transcoding tool to convert a clip from one codec to another. Most likely, this won't show a huge difference between NVIDIA GeForce and AMD Radeon cards, but we have found that it is still benefitial to do this type of testing as there are often little surprises that come up. If you are interested in performance when encoding a project with multiple clips, transitions, and effects, we recommend checking out our Premiere Pro or After Effects articles instead as those will give you a more accurate representation of what you might see in those situations.

It is worth noting that while we will only be looking at Media Encoder performance in this article, choosing a specific GPU to use is a much more complicated topic. Many other factors including current price, reliability, power draw, noise level, and available cooler designs are all things that need to be considered. If you would like to skip over our test setup and benchmark result/analysis sections, feel free to jump right to the Conclusion section.

To compare the AMD and NVIDIA, we tested a wide range of cards from both the Radeon and GeForce lines. We do want to point out that at the time we did this testing, it was difficult to source a quality AMD Radeon Vega card that was not factory overclocked. Rather than delaying our testing we decided to go ahead and use the overclocked cards even though it will slightly skew the results in favor of those cards.

For the testing itself, we decided to focus on performance when transcoding a single, unedited clip using both the "H.264 – High Quality 2160p 4K" and "DNxHR HQ UHD" (matching media FPS) presets. If you are interested in performance when encoding a project with multiple clips, edits, transitions, and effects, we recommend checking out our Premiere Pro or After Effects articles instead as those will give you a more accurate representation of what you might see in those situations. The footage used in our testing is shown below with links to where you can download it yourself: 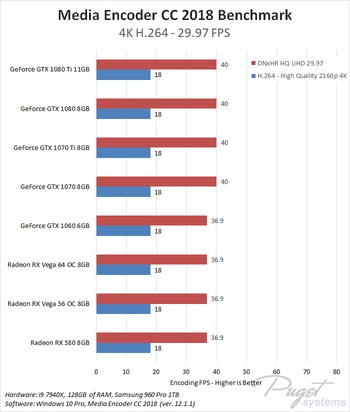 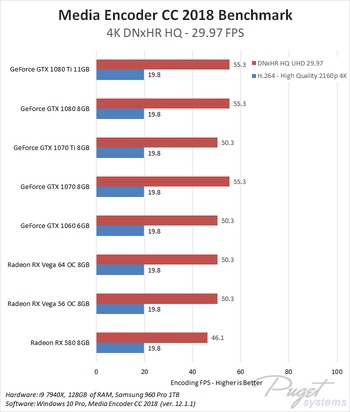 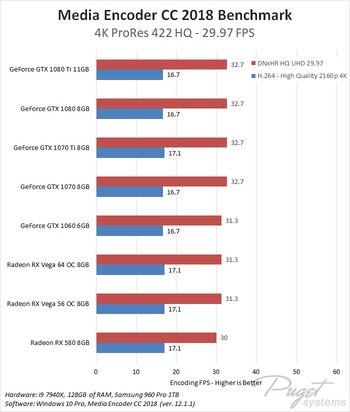 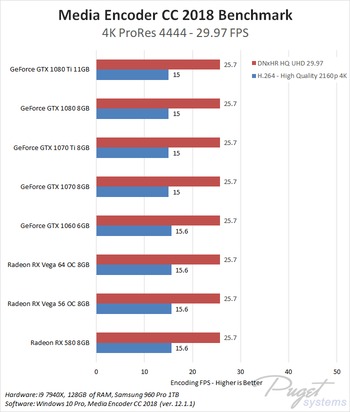 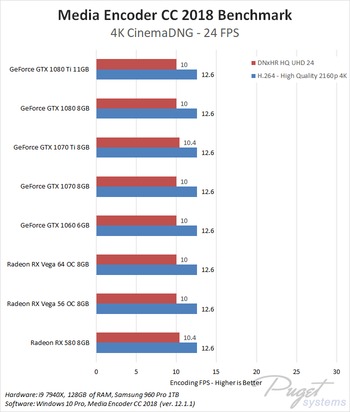 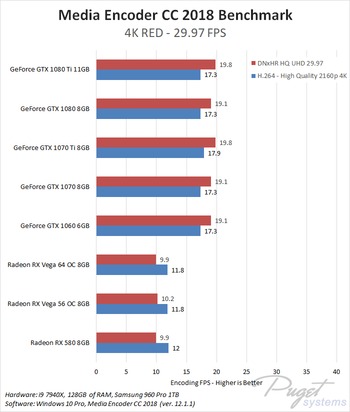 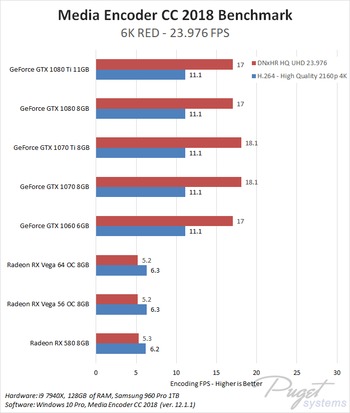 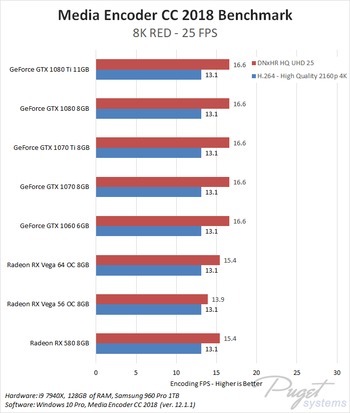 Looking at our benchmark results for Adobe Media Encoder, there is a very clear trend:

Other than that, there is actually remarkably little difference between all of the cards we tested. Even between the GTX 1060 and the GTX 1080 Ti, the average difference was a fraction of a FPS. In most cases where you see a difference shown in the charts, it is actually just a single second difference. And since Media Encoder only logs to the nearest second, that really means that the majority of those results are actually within the margin of error.

The results of our testing are frankly pretty underwhelming but really just goes to show that if transcoding media in Media Encoder is something you do a lot of, getting a fast GPU should be pretty low on your priority list. You will be much better off getting a very moderate GPU and spending the money you saved on a more powerful CPU.

If we compile all our AME testing together and score it based on how fast the system was able to transcode the clips relative to the media's FPS, we get the following overall scores for each GPU: 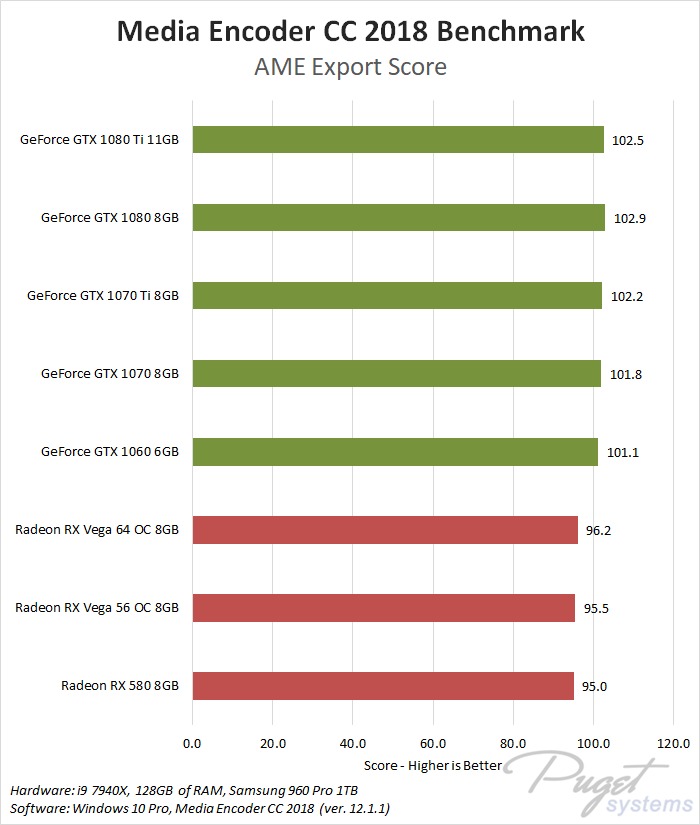 Remember again that we really only saw a difference between the cards when testing RED footage, but for the codecs we tested the NVIDIA GeForce cards were overall faster than the AMD Radeon cards. If you don't work with RED footage the GPU really doesn't matter much in Media Encoder when doing a straight transcode, but if you are simply wanting to know whether you should use GeForce or Radeon and have no preference for either brand, from a performance standpoint the answer is going to be "use GeForce".