Skip to content
Always look at the date when you read an article. Some of the content in this article is most likely out of date, as it was written on November 14, 2019. For newer information, see Photoshop CPU performance: AMD Ryzen 9 3950X

Back in July 2019, AMD released the first of their 3rd generation Ryzen processors that greatly closed the gap between Intel and AMD for lightly threaded applications like Photoshop. In fact, at the time, the AMD Ryzen 9 3900X was actually about 1% faster than the Intel Core i9 9900K in our Photoshop benchmark.

Now, AMD is launching one more 3rd generation Ryzen CPU – the AMD Ryzen 9 3950X. This processor features a staggering 16 CPU cores which is really starting to blur the line between "consumer" and "HEDT" (High End Desktop) processors. It is also more expensive than what you would typically find on this type of platform, coming in at a MSRP of $749. For comparison, both the AMD Ryzen 9 3900X 12 Core and Intel Core i9 9900K 8 Core have a MSRP of $499. If you want more information on the specs of this new processor, we recommend checking out our New CPU Announcement: AMD Ryzen 9 3950X post. 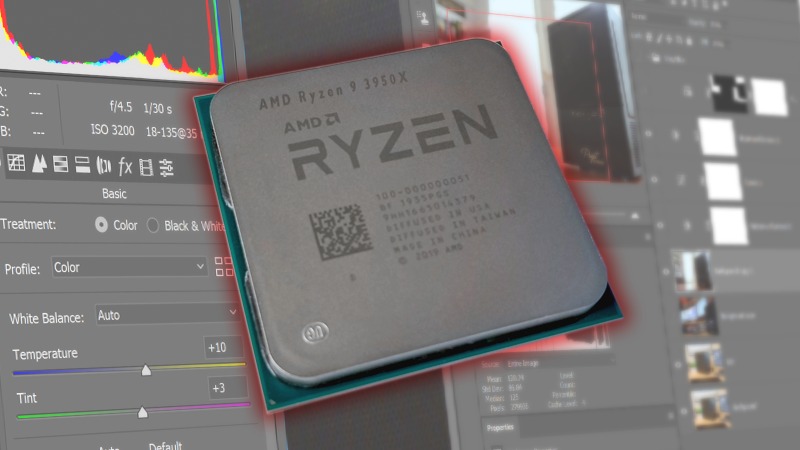 In this article, we want to see whether the increase in core count (and price) is worth it for Adobe Photoshop. However, since Intel is launching their new Core X-10000 series processors and AMD is launching their new 3rd Gen Threadripper processors in the near future, we are only going to compare the 3950X to a handful of Intel and AMD CPUs. If you want to see how it stacks up against a wider range of Intel and AMD processors, check back in the coming weeks for articles that will include the AMD Ryzen 3rd Gen, AMD Threadripper 3rd Gen, Intel Core 9th Gen, and Intel Core X-10000 series processors in a number of applications.

The second thing to note is that we are using an unreleased version of our Photoshop Benchmark. The scores from this upcoming version are actually completely interchangeable with the version you can currently download; we have just made a number of usability and stability improvements.

Feel free to skip to the next section for our analysis of these results if you rather get a wider view of how each CPU performs in Photoshop. 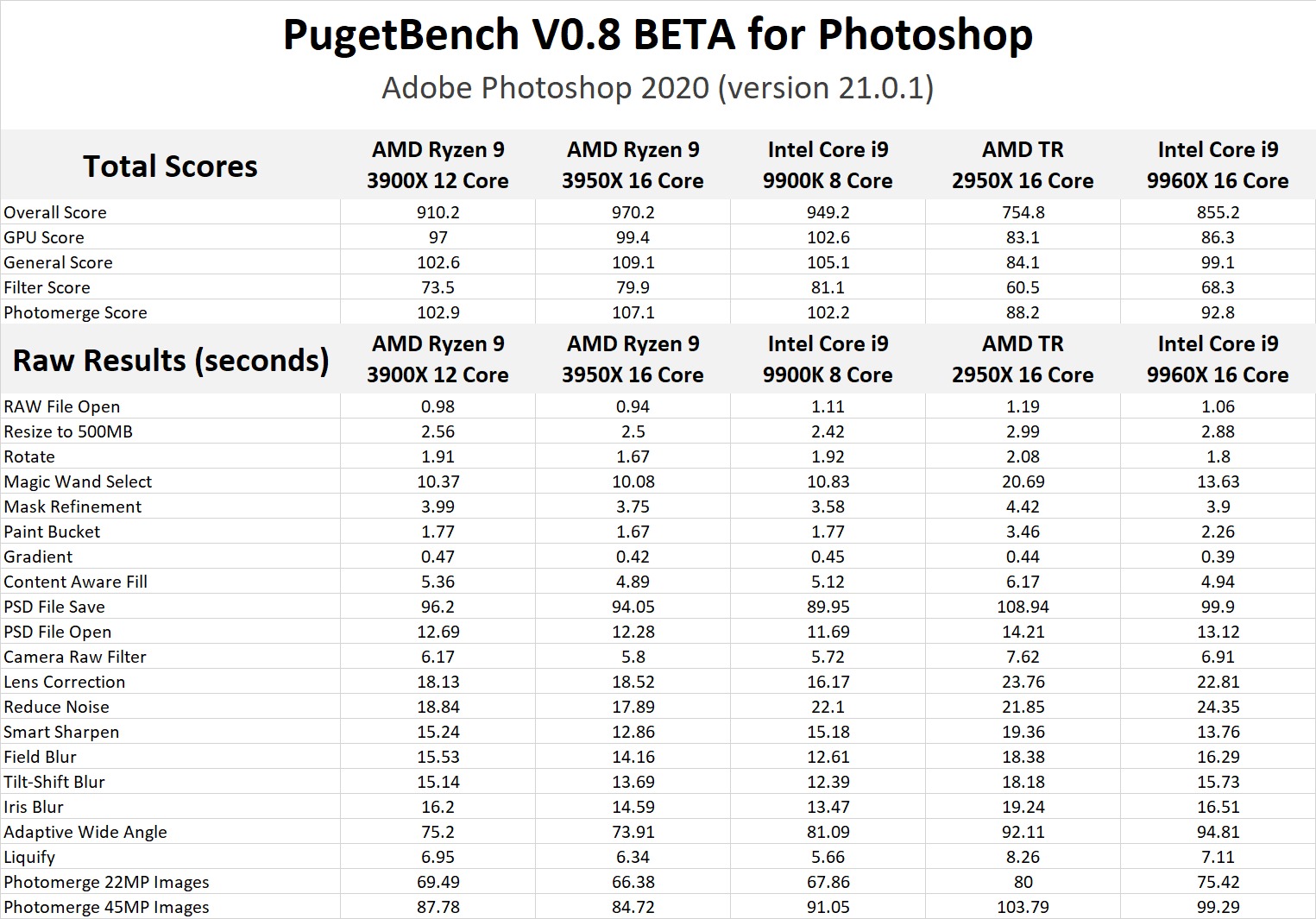 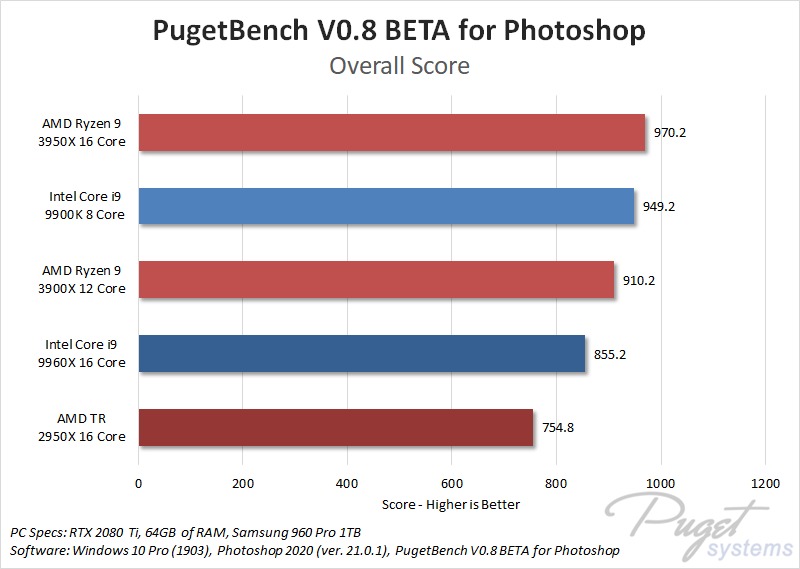 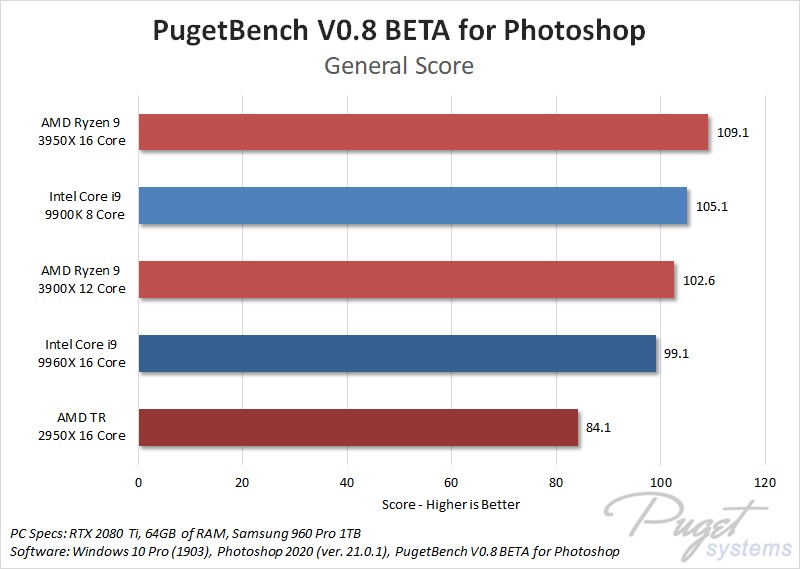 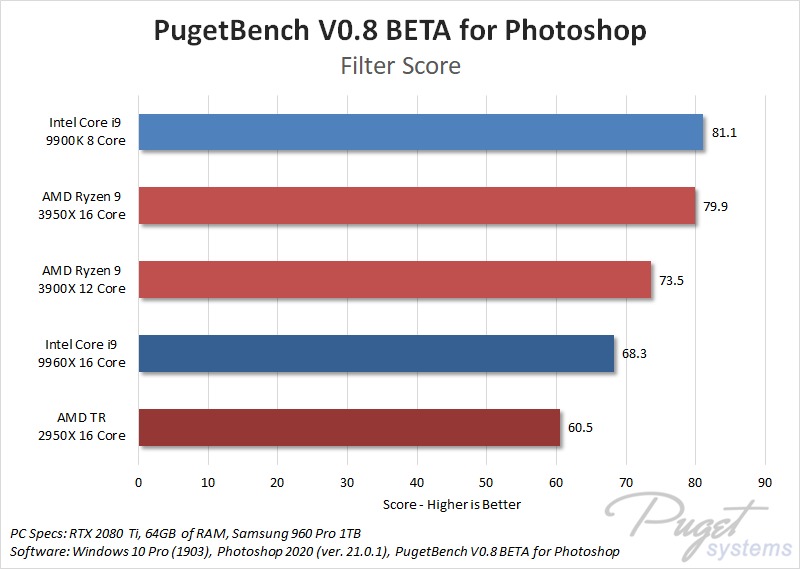 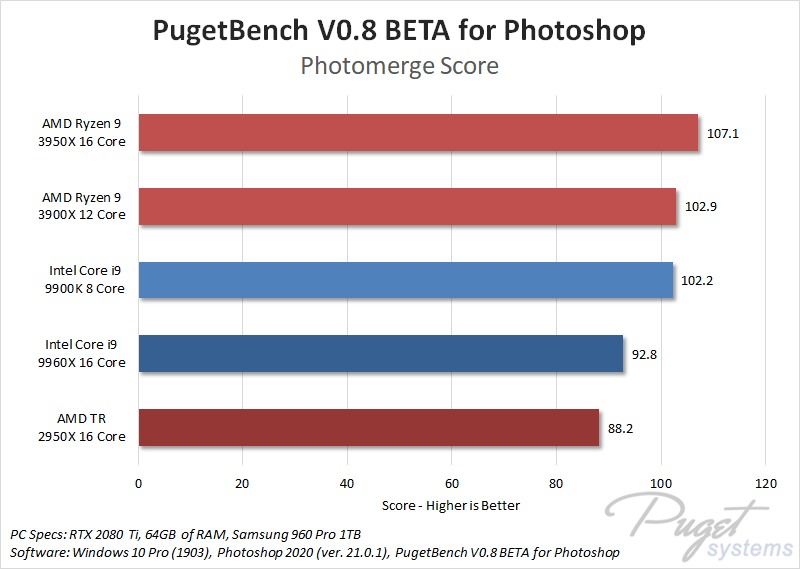 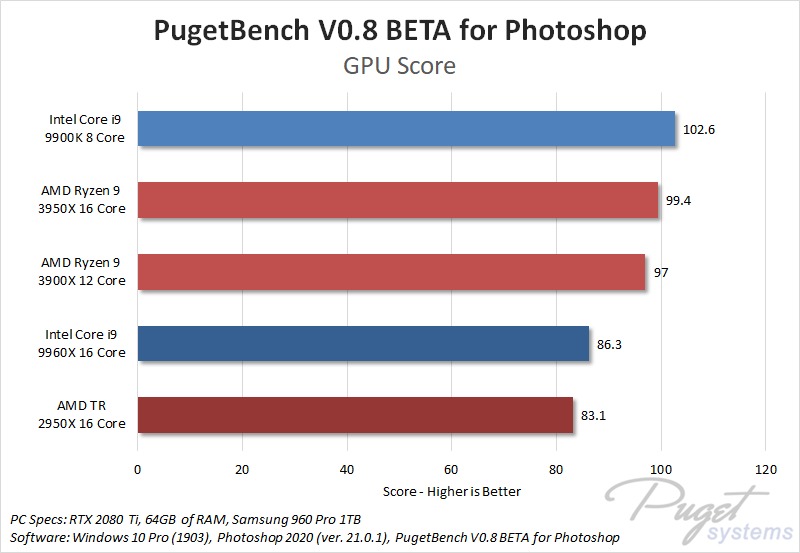 Compared to the AMD Ryzen 9 3900X 12 Core processor, the Ryzen 9 3950X 16 Core is only about 6% faster in Photoshop even though it costs about 50% more. This is primarily due to the fact that Photoshop isn't able to take advantage of a high number of CPU cores, so you only get a marginal performance gain from those extra 4 cores.

Compared to Intel's offerings, the 3950X is able to sneak ahead of the Intel Core i9 9900K, but it is only by about 2% which is going to be hard to notice in the real world. As a side note, it is interesting to see the Core i9 9900K take a small lead over the Ryzen 9 3900X since our last testing had the 3900X winning by a small margin. There have been numerous BIOS updates, driver updates, as well as the move to Photoshop 2020 since that test, and any of those could potentially explain this slight shuffling of relative performance.

Overall, the AMD Ryzen 9 3950X is the fastest CPU we have tested for Photoshop to date but it is worth keeping in mind that the Intel Core i9 9900K is quite a bit less expensive while only being about 2% slower. Even if you wanted to stick with AMD, the Ryzen 9 3900X is about the same price as the 9900K, and is only about 7% slower than the 3950X.

Keep in mind that the benchmark results in this article are strictly for Photoshop. If your workflow includes other software packages, you need to consider how the processor will perform in all those applications. Currently, we have articles for Lightroom Classic, Premiere Pro, After Effects, DaVinci Resolve, and a number of other applications.