Skip to content
Always look at the date when you read an article. Some of the content in this article is most likely out of date, as it was written on November 14, 2019. For newer information, see Premiere Pro CPU performance: AMD Ryzen 9 3950X

Ever since the launch of the 3rd generation Ryzen CPUs back in July of 2019, AMD and Intel have been trading blows in consumer CPU space when it comes to Premiere Pro performance. The Intel 9th Gen CPUs edged ahead in some areas, while the AMD Ryzen CPUs took the lead in others.

Now, AMD is launching one more 3rd generation Ryzen CPU – the AMD Ryzen 9 3950X. This processor features a staggering 16 CPU cores which is really starting to blur the line between "consumer" and "HEDT" (High End Desktop) processors. However, the increase in core count comes with a fairly large MSRP price of $749. For comparison, both the AMD Ryzen 9 3900X 12 Core and Intel Core i9 9900K 8 Core have a MSRP of $499. If you want more information on the specs of this new processor, we recommend checking out our New CPU Announcement: AMD Ryzen 9 3950X post.

Article updated 11/19/2019 We discovered that even though integrated graphics was enabled on the 9900K, Premiere Pro was not properly utilizing Quicksync to accelerate H.264/H.265 performance. Clearing preferences and re-installing Premiere Pro 2020 fixed the issue, and we have updated the results to reflect the performance of the Core i9 9900K with hardware acceleration enabled. This does not dramatically change the conclusion, but it did reduce the performance gap between the Core i9 9900K and the new Ryzen 9 3950X. 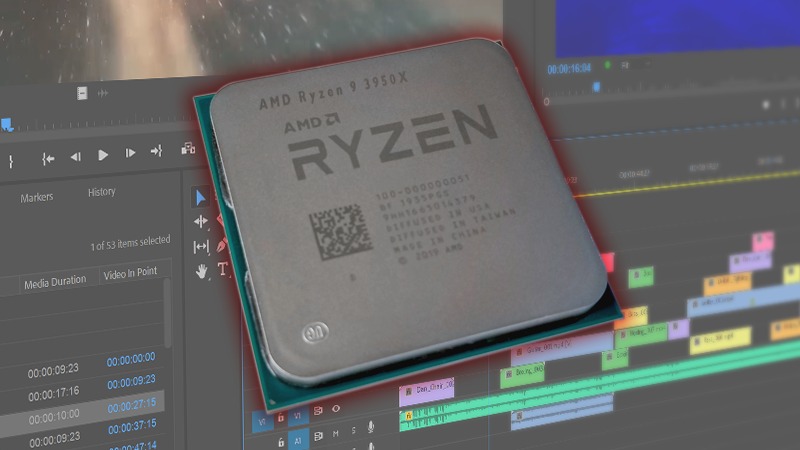 In this article, we want to see whether the increase in core count (and price) is worth it for Adobe Premiere Pro. However, since Intel is launching their new Core X-10000 series processors and AMD is launching their new 3rd Gen Threadripper processors in the near future, we are only going to compare the 3950X to a handful of Intel and AMD CPUs. If you want to see how it stacks up against a wider range of Intel and AMD processors, check back in the coming weeks for articles that will include the AMD Ryzen 3rd Gen, AMD Threadripper 3rd Gen, Intel Core 9th Gen, and Intel Core X-10000 series processors in a number of applications.

While our benchmark presents various scores based on the performance of each test, we also wanted to provide the individual results. If there is a specific codec you primarily use, examining the raw results for that task is going to be much more applicable than the total scores. 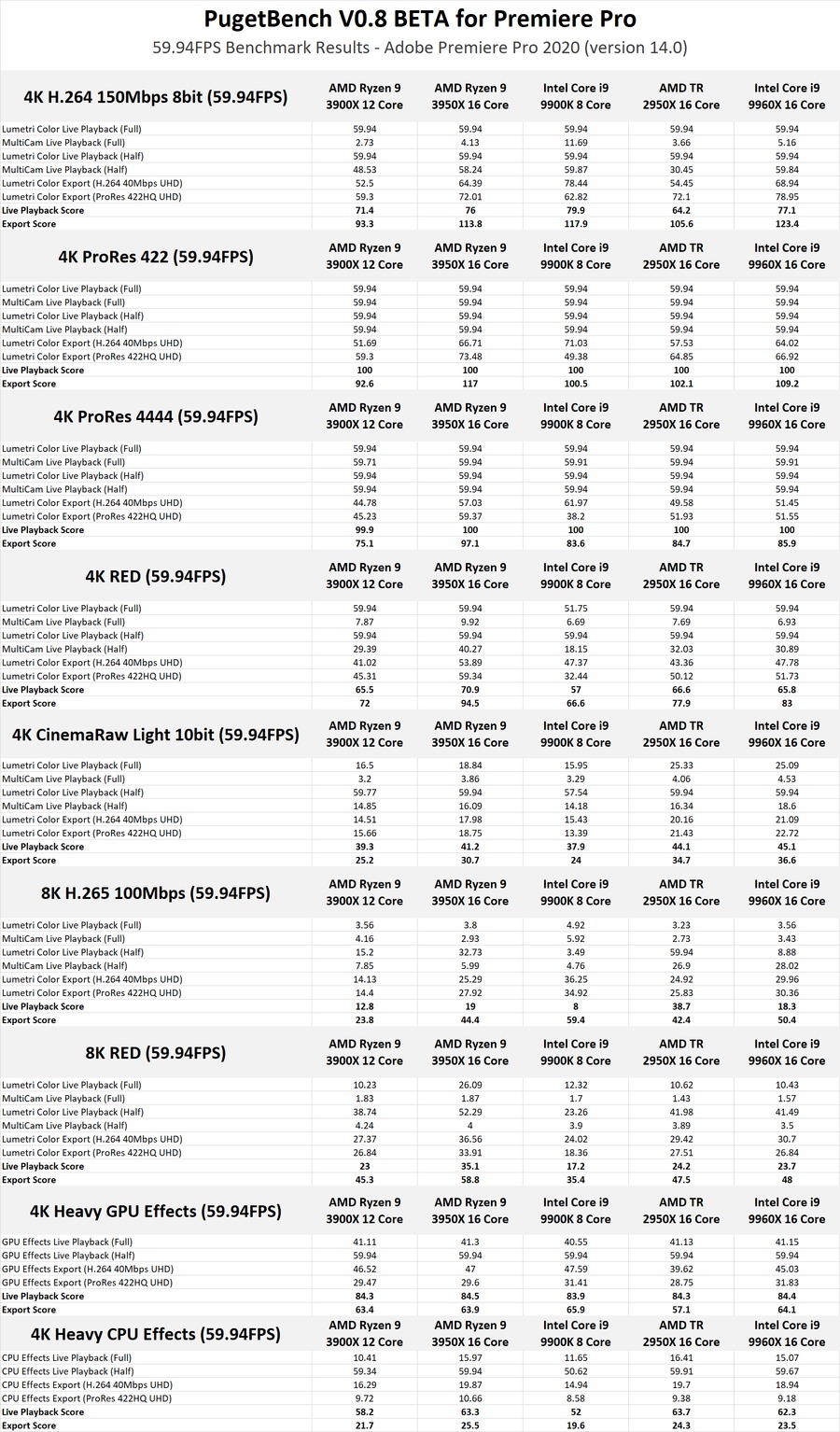 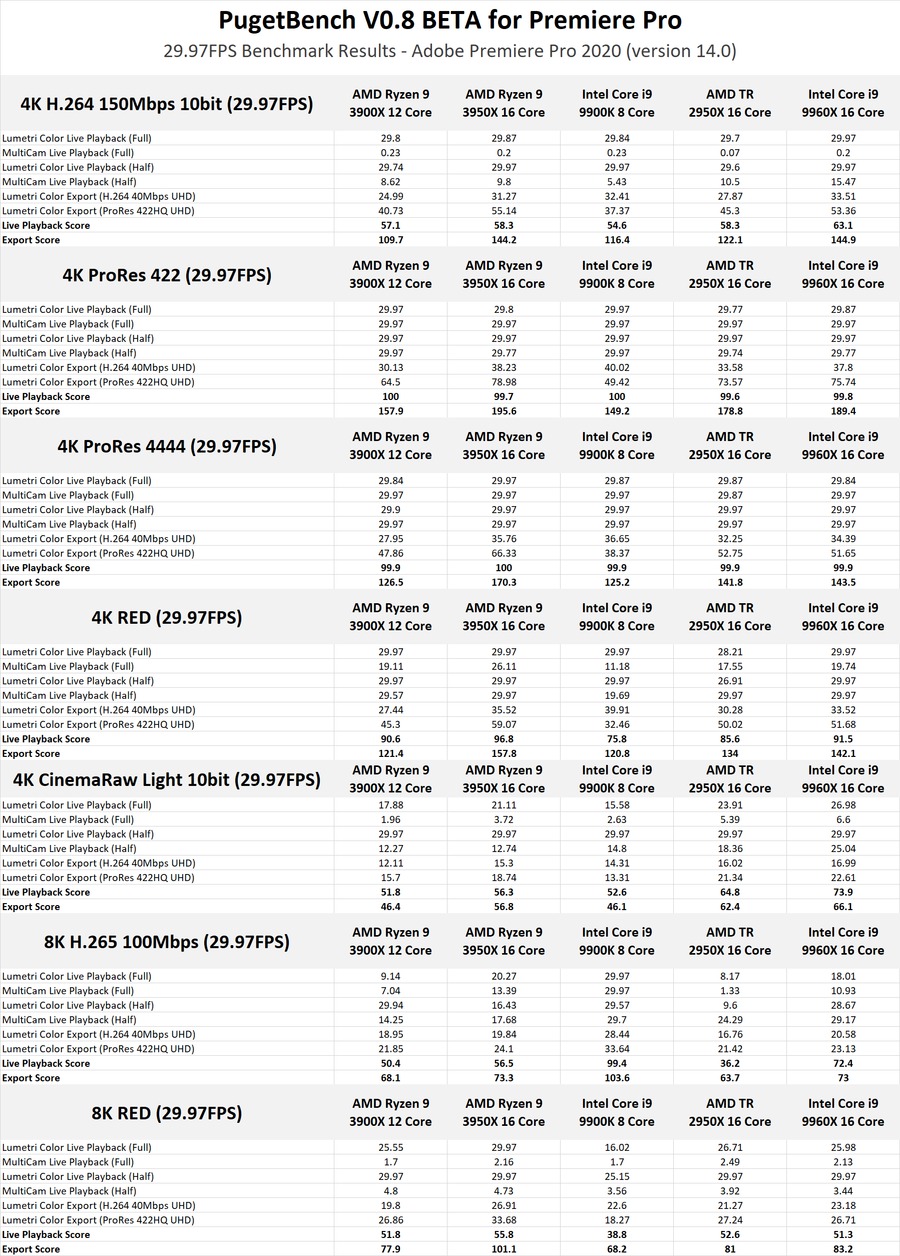 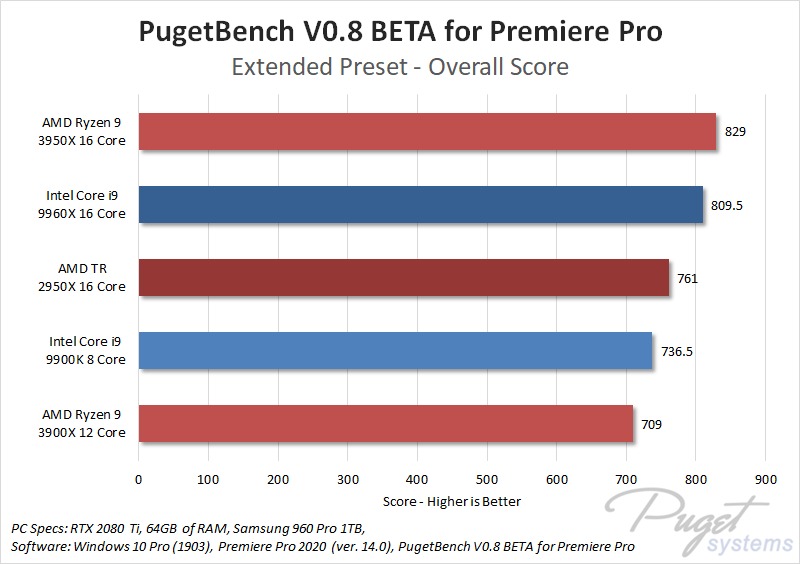 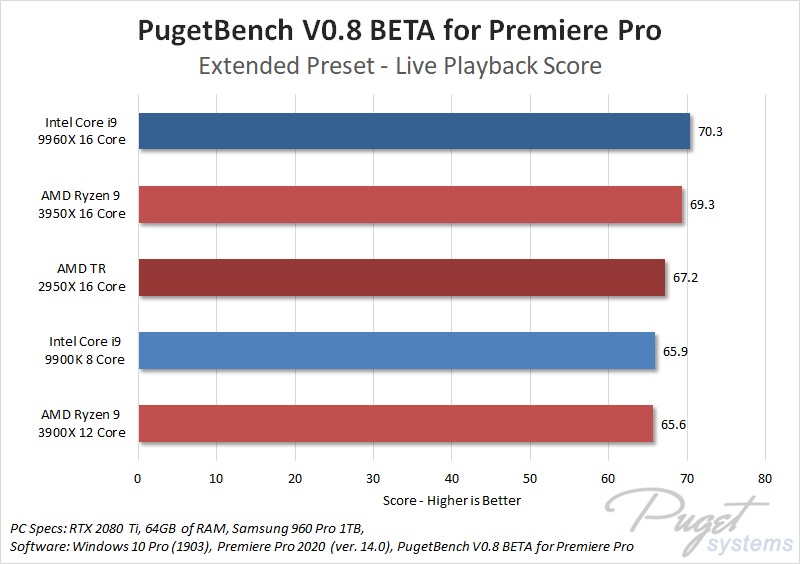 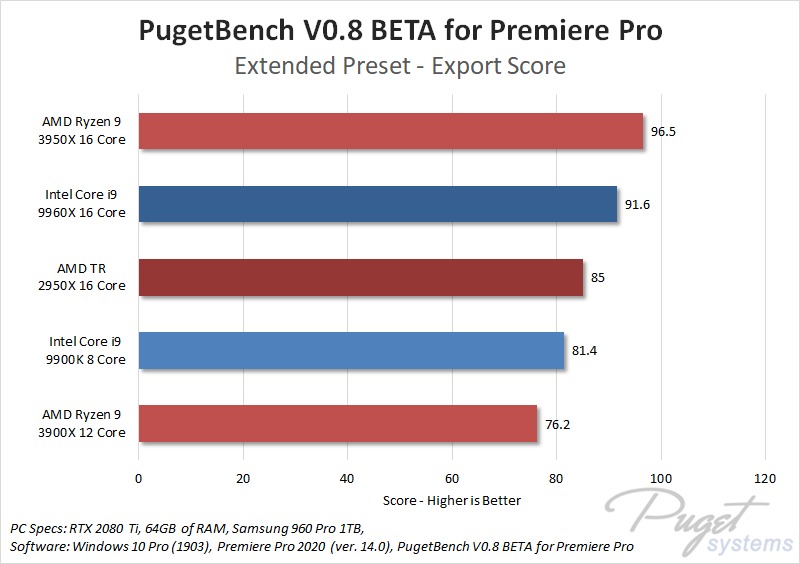 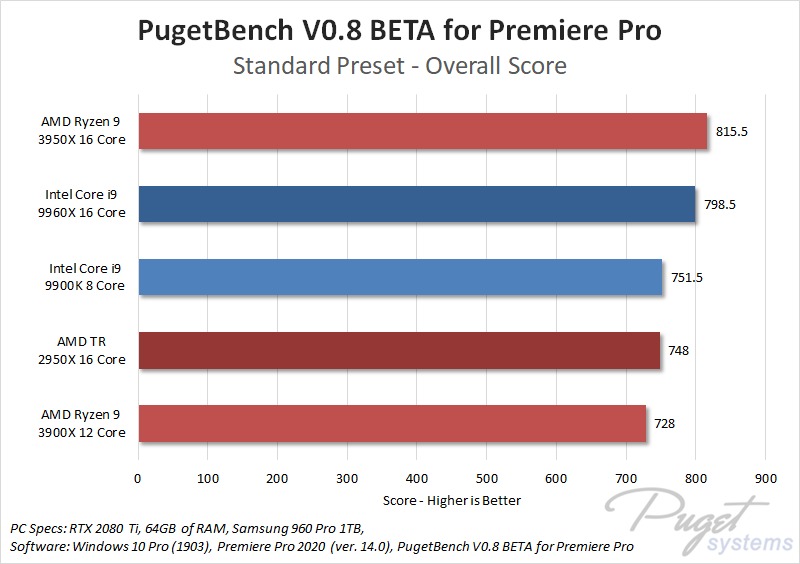 Premiere Pro is pretty decent at taking advantage of a higher number of CPU cores, and it really shows with the AMD Ryzen 9 3950X. Overall, it is about 17% faster than the Ryzen 9 3900X or about 13% faster than the Intel Core i9 9900K. Against the HEDT offerings from Intel and AMD, it edges in front of the Intel Core i9 9960X by a few percent and beats the Threadripper 2950X by 9%.

It is worth noting that for live playback, the performance gain is a bit less than it was overall. Here, it essentially matches the 9960X and 2950X, but is still faster than the 3900X and 9900K by about 5%.

All in all, the AMD Ryzen 9 3950X is an absolutely terrific CPU for Premiere Pro. Unlike other applications like Photoshop and After Effects where the 3950X is only marginally faster than the Ryzen 9 3900X or Intel Core i9 9900K, in Premiere Pro the 3950X is around 5% faster for live playback, and a whopping 15-30% faster for exporting. For many users, that is well worth the 50% increase in MSRP, and makes it excellent in terms of both overall performance and performance for your dollar. It even solidly beats the AMD Threadripper 2950X and sneaks in just ahead of the Intel Core i9 9960X.

Keep in mind that the benchmark results in this article are strictly for Premiere Pro. If your workflow includes other software packages, you need to consider how the processor will perform in all those applications. Currently, we have articles for Photoshop, Lightroom Classic, After Effects, DaVinci Resolve, and a number of other applications.

In addition, both Intel and AMD have new processors coming out in the near future which may change the price to performance picture. We are very interested to see how the 3950X stands up against these new processors, and we will be publishing more articles as they launch. So be sure to keep a close eye on our list of Hardware Articles in the coming weeks.