It used to be that if you wanted the best workstation for Premiere Pro, that meant using an Intel CPU. However, this started to change back in July 2019 when AMD launched its 3rd Gen Ryzen CPUs which finally made AMD a valid alternative at the mid-range and a very strong choice for those that were on a tight budget. But for a high-end Premiere Pro workstation, Intel's X-series processors continued to reign as king.

Now, both Intel and AMD are launching new HEDT (High End Desktop) processors that may drastically change the equation. On Intel's side, the new Core X-10000 series processors are not significantly faster than the previous generation, but Intel has cut their prices nearly in half! For example, where the MSRP of the Core i9 9980XE was $1,979, the new Core i9 10980XE is just $979. This alone will greatly improve the amount of performance many video editors are able to afford and will make working with 4K or even 8K media a much more attainable reality.

On AMD's side, the new Threadripper 3rd Gen CPUs are slightly more expensive than earlier models, but their raw performance is expected to be dramatically improved. Some of the previous generation Threadripper CPUs were almost able to match their Intel X-series counterparts, and this may be just what AMD needs to make them the top CPU choice for Premiere Pro. 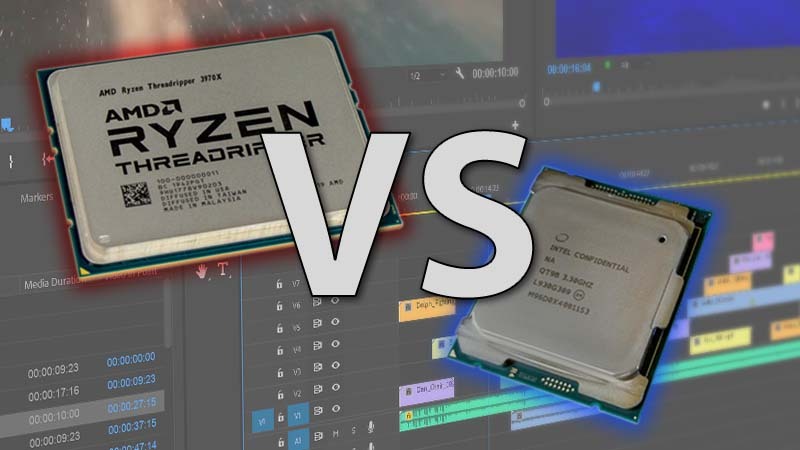 In this article, we will specifically be examining the performance of these new CPUs in Premiere Pro, although on our article listing page, we also have a range of similar posts examining other applications. If you would like to skip over our test setup and benchmark sections, feel free to jump right to the Conclusion.

While our benchmark presents various scores based on the performance of each test, we also like to provide the individual results for you to examine if you want to. If there is a specific codec or framerate you typically work with, examining the raw results for those tests is going to be much more applicable than the scores that our benchmark calculates. 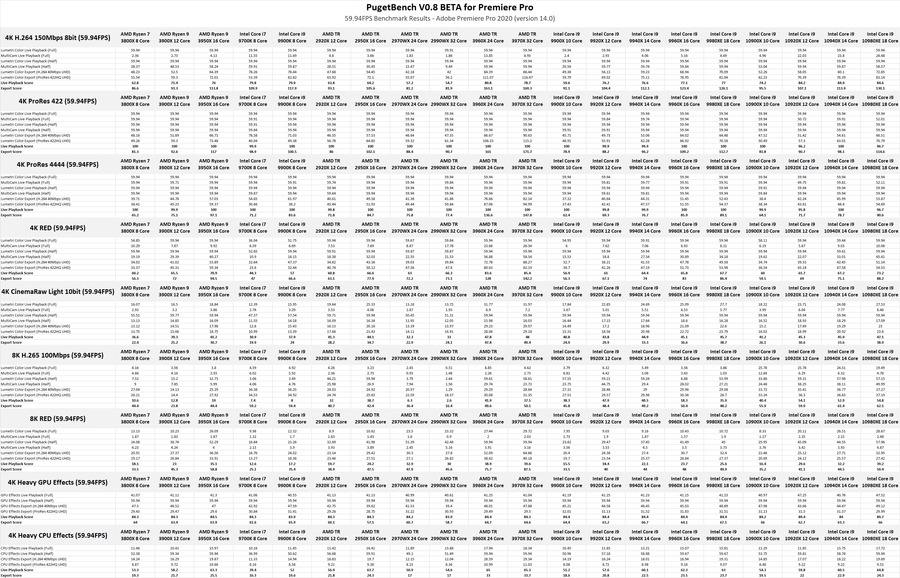 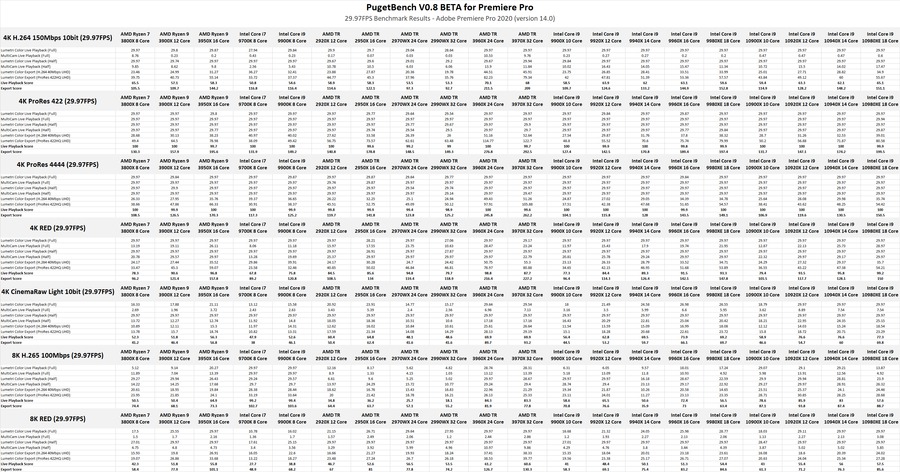 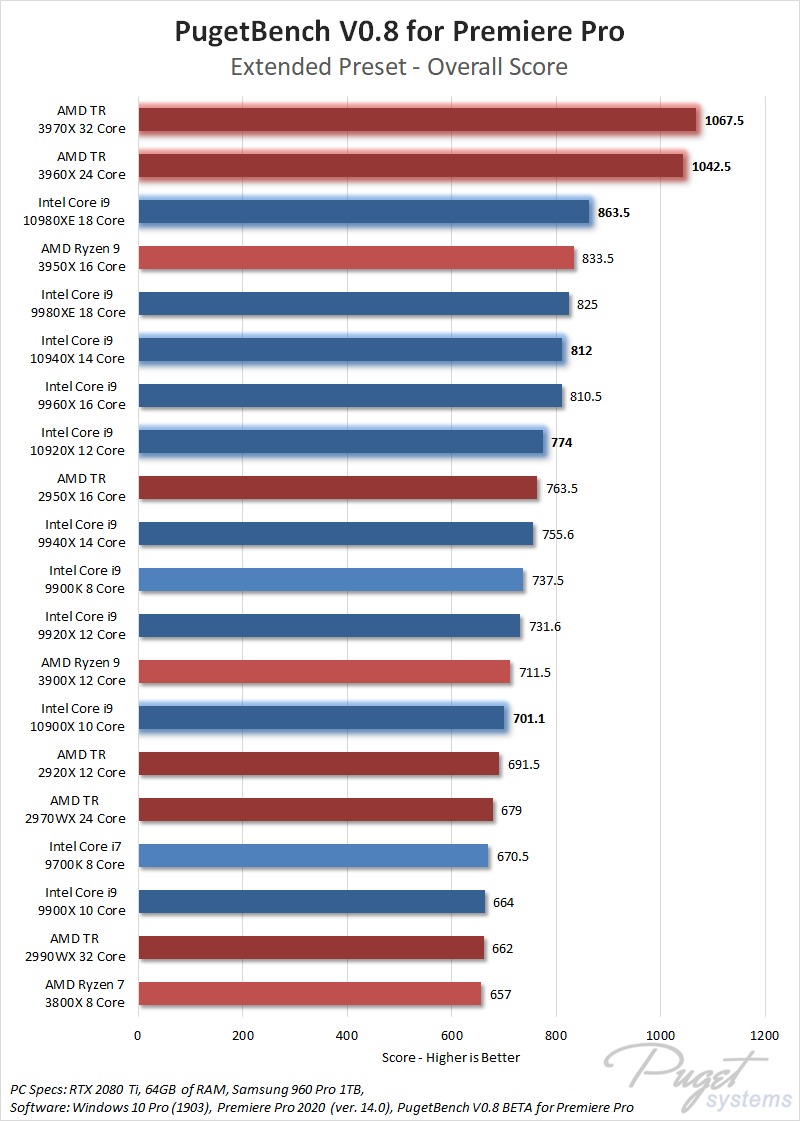 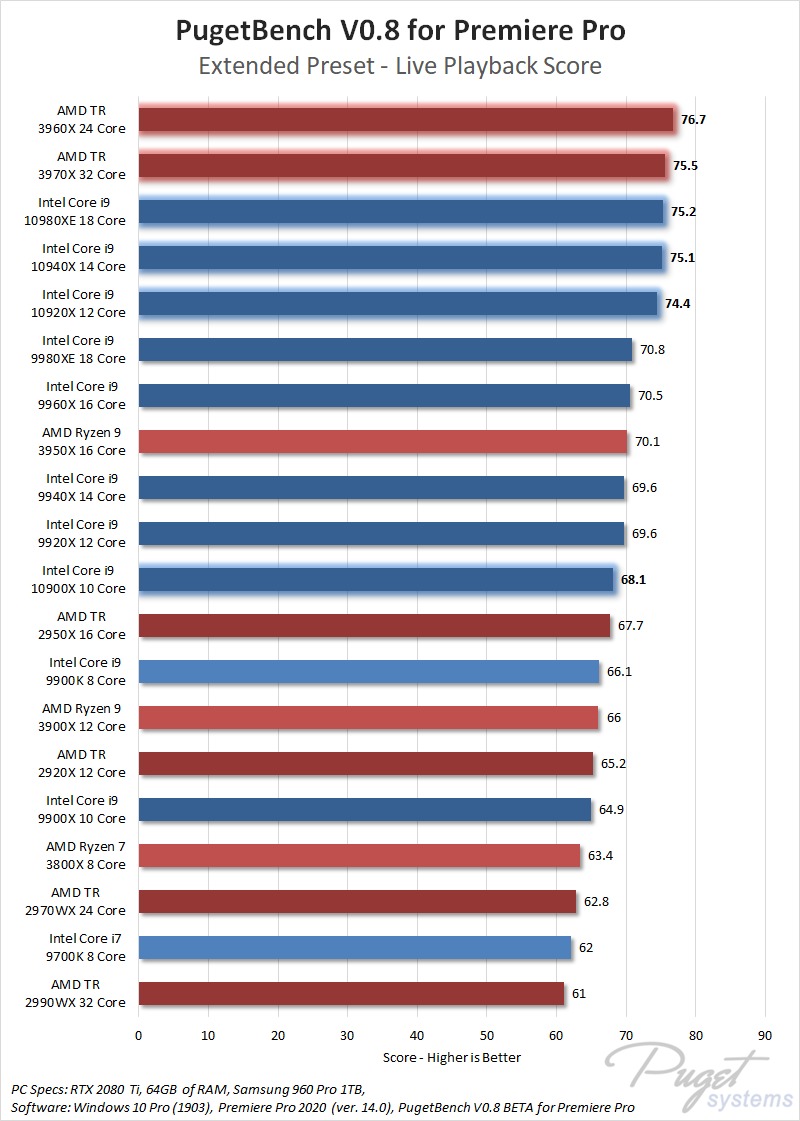 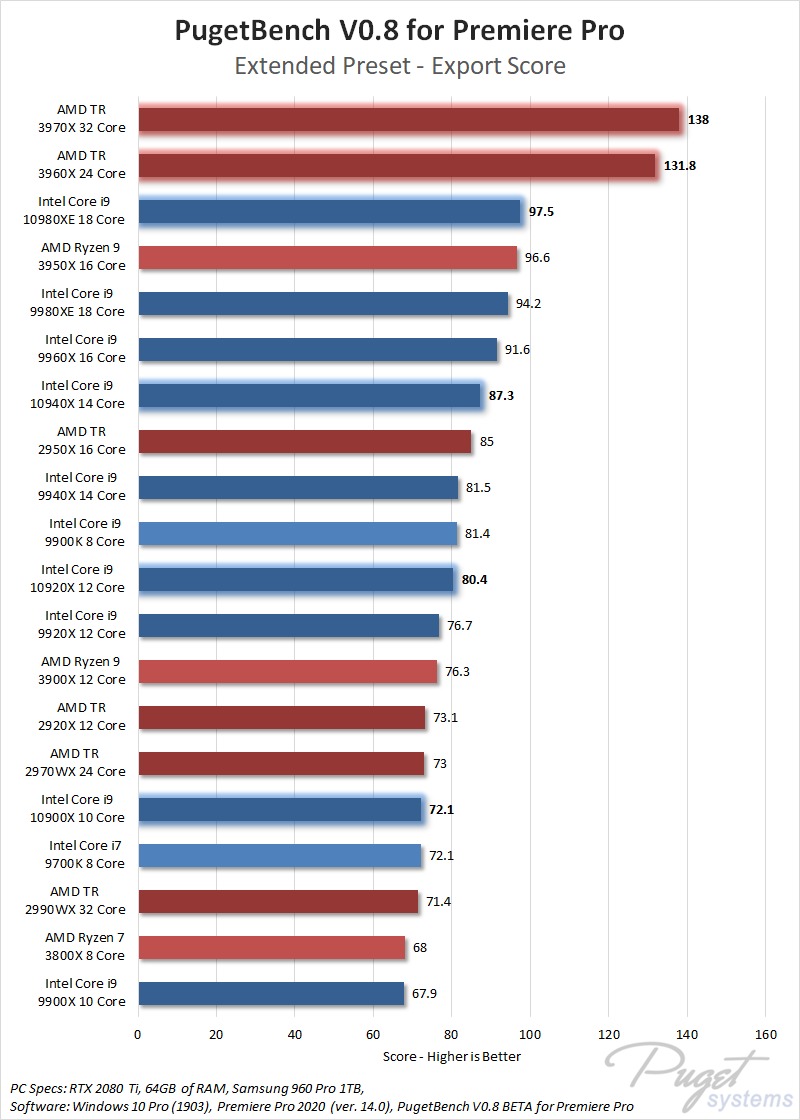 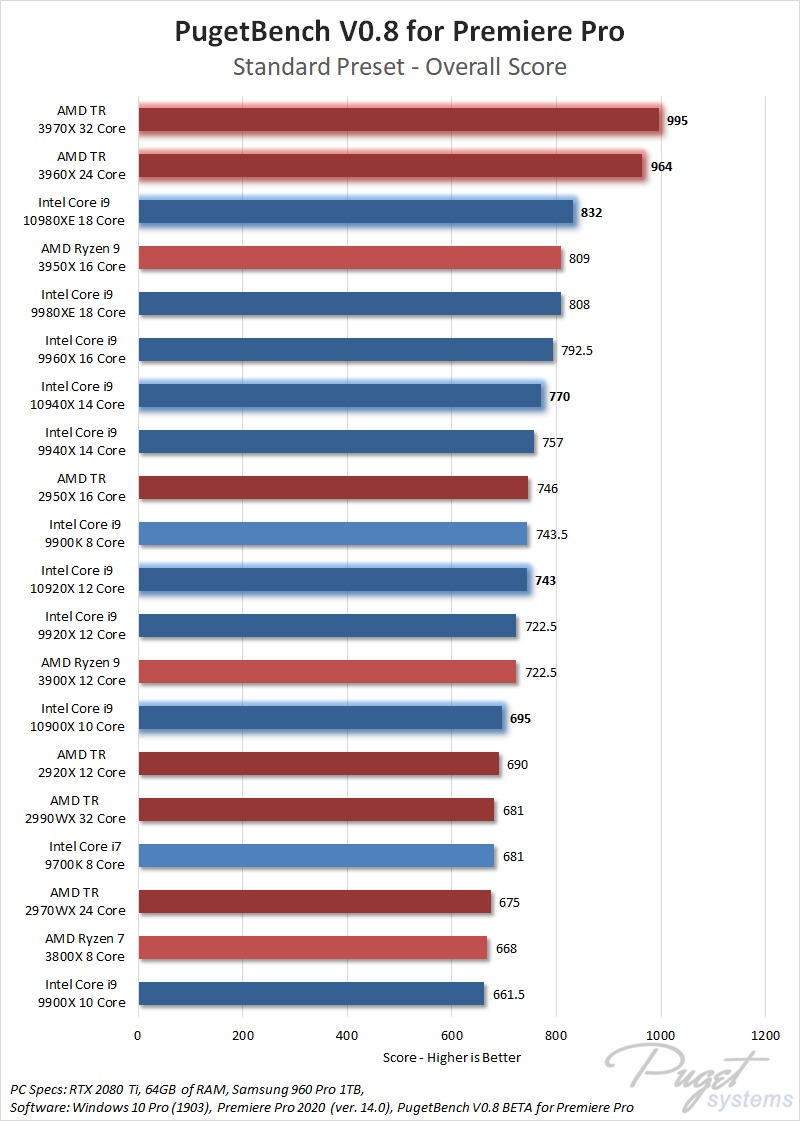 Starting off with what is likely the most obvious conclusion – the AMD Threadripper 3rd Gen CPUs are really, really good for Premiere Pro. The only real caveat is that they are only better than the new Intel X-series CPUs when it comes to exporting. For live playback, all of the Threadripper 3rd Gen and Intel X-1000 series processors (with the exception of the Core i9 10900X) performed about the same on average. There are a ton of nuances with individual CPUs being better for specific codecs (or even the same codec but at different framerates), but overall you can consider the Threadripper 3rd Gen and Intel X-10000 series as being equal for live playback.

This isn't all that exciting from an AMD vs Intel perspective, but it is worth noting that both the new Intel and AMD processors saw a pretty decent gain in performance over the previous generation. While the Intel X-10000 series is only about 7% faster than the X-9000 series models for live playback, the AMD Threadripper 3rd Gen is about 20% faster than the previous generation Threadripper 2970WX/2990WX.

Even factoring in the MSRP, however, Intel only barely comes ahead – and even that is completely subjective on what is most important to you. Compared to the AMD Ryzen 9 3950X, the Core i9 10940X is about $35 more expensive, but about 3% slower overall. On the plus side, the 10940X is 7% faster for live playback (which most users value higher than export performance), supports 256GB of RAM, has more PCIE lanes, and has the option for Thunderbolt on supported motherboards. It comes up often, so it is worth repeating that no AMD platform has a certified Thunderbolt solution at this time – ASRock has a few Ryzen boards that have un-certified implementations, but trust us, you definitely don't want to risk it when it comes to something as finicky as Thunderbolt is on PC.

On the other hand, if you hate proxies and just want to get the best live playback performance possible, the new Intel Core X-10000 series processors are just as fast as the more expensive AMD Threadripper 3rd Gen CPUs for live playback. In fact, the 10920X, 10940X, and 10980XE all perform about the same for this, which gives you some flexibility when deciding which model to use. The higher-end models give better exporting performance, but you may opt for a less expensive model in exchange for larger/faster storage, more RAM, or other system upgrades instead if export performance is not your primary concern.

As is always the case, there are a number of other considerations to take into account as well. Thunderbolt is a feature many of our video editing customers need, and at the moment you need to stick with Intel in order to get certified Thunderbolt support. In addition, you need to factor in the other applications that are a regular part of your workflow. The benchmark results in this article are strictly for Premiere Pro and the relative performance will vary widely between different applications.

If your workflow includes other software packages (we have similar articles for Photoshop, Lightroom Classic, After Effects, DaVinci Resolve, and many others), you need to consider how the processor will perform in all those applications. Be sure to check our list of Hardware Articles to keep up to date on how all of these software packages perform with the latest CPUs.