For years, choosing between an Intel and AMD processor has been relatively straight forward: Intel held a very strong lead for any application that is lightly threaded (like Photoshop), while AMD excelled for any application that is able to effectively utilize a high number of CPU cores. This changed quite a bit on the consumer side when AMD launched their 3rd generation Ryzen CPUs, but held true when it came to the HEDT (High End Desktop) processors from both brands.

Today, both Intel and AMD are launching new HEDT processors that have the potential to shake things up dramatically. On Intel's side, the new Core X-10000 series processors are not significantly faster than the previous generation, but Intel has cut their prices nearly in half! For example, where the MSRP of the Core i9 9980XE was $1,979, the new Core i9 10980XE is just $979.

On AMD's side, the new Threadripper 3rd Gen CPUs are slightly more expensive than earlier models, but their raw performance is expected to be quite a bit better. What makes us most excited about these processors is not the performance in highly threaded tasks where AMD has typically been strong, but the fact that single-threaded performance (which is a major issue with the first and second-generation Threadripper CPUs) has been drastically improved. 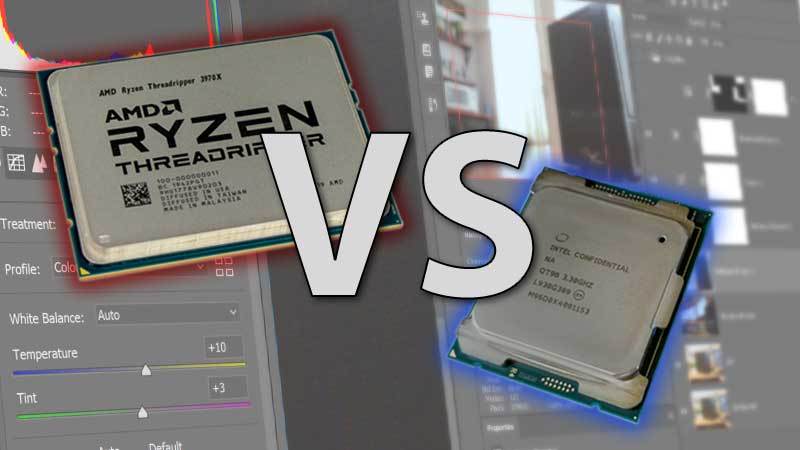 In this article, we will be examining the performance of these new CPUs in Photoshop, although on our article listing page, we also have a range of similar posts examining other applications. If you would like to skip over our test setup and benchmark sections, feel free to jump right to the Conclusion.

The second thing to note is that we are using a version of our Photoshop Benchmark that is not yet released to the public. The scores from this upcoming version are completely interchangeable with the version you can currently download; we have just made a few usability and stability improvements. This means that you are free to download the version that is currently available to compare your system to the results in this post.

When comparing 20 different CPUs, there is potentially a huge amount of results to analyze. Thankfully, Photoshop is relatively straight forward since it is a lightly threaded application. This means that core count doesn't impact performance all that much - it is all about the maximum Turbo speed and the general architecture of each CPU.

Starting with new Intel Core X-10000 CPUs, these new models are all about 6-8% faster than the previous generation which is about what we have come to expect from CPU refreshes in recent years. Combined with the huge price cut, this would normally be a pretty exciting CPU launch.

Unfortunately for Intel, AMD steals the show with the new Threadripper CPUs. In terms of straight performance, the Threadripper 3960X (which is actually a hair faster than the 3970X for this workload) is about 5% faster than the Core i9 10980XE. This isn't a great return on investment considering the 3960X has a $420 higher MSRP, but what is incredible is the fact that the 3970X and 3960X are about 70% faster than the previous generation 2990WX and 2970WX. That is a massive improvement in performance and definitively shows that AMD has effectively solved the single-threaded performance issues that have plagued the first and second-generation Threadripper CPUs.

Of course, if you want to get the best performance possible in Photoshop, there are better options than either the Intel Core X-10000 series or the AMD Threadripper 3rd Gen processors. You even have several choices with both the AMD Ryzen 9 3900X and Intel Core i9 9900K performing within a percent of the (much) more expensive Threadripper 3960X, and only barely trailing behind the (slightly) more expensive AMD Ryzen 9 3950X.

Choosing between an Intel X-10000 series or an AMD Threadripper 3rd Gen CPU for Photoshop is a bit of an odd situation since neither is the ideal CPU for this kind of application. However, in terms of absolute performance, the AMD Threadripper 3960X wins this versus battle, although the Intel X-10000 series processors are only about 4% slower at a much lower price point.

While the larger memory capacity (256GB max) of these processors will be useful for a small number of Photoshop users, most people are likely going to go for the even more cost-effective options like the AMD Ryzen 9 3900X or the Intel Core i9 9900K. Being able to get almost the same performance from a less expensive CPU allows you the freedom to add more RAM, faster storage, etc. which overall should make for a better experience in Photoshop than dumping all of your budget into a Threadripper or X-series CPU.

While this may not be an exciting battle between Intel and AMD, there is a very interesting side note to be aware of. Since Photoshop is a relatively lightly threaded application, it is a decent metric for many of the "random" tasks you do in most applications. Things like opening and saving projects, navigating around the UI, and other similar tasks tend to use only one or two cores. So even if you don't care about Photoshop at all, these results can give you a rough idea of how "snappy" many applications may feel with these processors. This is not always the case of course, but as far as a generic rule of thumb goes, it shouldn't be too far off.

Keep in mind that the benchmark results in this article are strictly for Photoshop and the relative performance will vary widely between different applications. If your workflow includes other software packages (we have similar articles for Photoshop, Lightroom Classic, Premiere Pro, After Effects, DaVinci Resolve, and many others), you need to consider how the processor will perform in all those applications. Be sure to check our list of Hardware Articles to keep up to date on how all of these software packages perform with the latest CPUs.

".... although the Intel X-10000 series processors are only about 4% slower at a much lower price point."
After that line, this should have followed: The Ryzen 3800x is easily the best price-to-performance ratio part here at just $370, beating out all the X-10000 series contenders.

But I get it--this is a business. You have to move intel parts too.

It isn't exactly the same thing as what you proposed, but literally the next sentence includes "...most people are likely going to go for the even more cost-effective options like the AMD Ryzen 9 3900X or the Intel Core i9 9900K" which is pretty close. Price-to-performance is always something that is hard to judge since you will pretty much always get worse price-to-performance as you go up the stack. If you were to just assign a rating, then low-end CPUs are pretty much always going to win since they are so cheap.

Most of our posts right now are looking fairly specifically at the Intel X-series vs AMD Threadripper since those are the CPUs that are launching today. We did want to include the Intel 9th Gen and AMD Ryzen CPUs to at least some degree, however, since many people may not otherwise realize how little performance gain there is to be had from a HEDT CPU in real world applications like Photoshop.

We do have a number of posts coming up that are going to talk more about what the best CPU is for different workflows - that will dive into more depth about exactly what is the right choice rather than just how the Intel X-series and AMD Threadripper processors compare.