For quite a while, After Effects has run best on CPUs that have exceptional per-core performance such as those found in Intel and AMD's "consumer" CPU lines. At the moment, both the AMD Ryzen 3rd Gen and Intel Core 9th Gen processors are excellent choices, both in terms of straight performance as well as their ability to support up to 128GB of RAM. That may sound like an absurd amount of RAM to non-AE users, but it is incredibly important as the more RAM you have, the more frames that can be stored in RAM Preview, which in turn means fewer frames that end up being re-rendered needlessly. And when you have comps that render at 5FPS (or less!), not needing to re-render frames is incredibly important.

Today, however, both Intel and AMD are launching a new set of HEDT (High End Desktop) processors. While performance is always going to be a main topic of discussion, what makes them immediately interesting for After Effects is the fact that both of these new processor lines support up to 256GB of RAM – doubling the amount of RAM we could use previously without needing to resort to an Intel Xeon-W platform.

On Intel's side, the new Core X-10000 series processors are not significantly faster than the previous generation, but in addition to the increased RAM capacity, Intel has also cut their prices nearly in half! For example, where the MSRP of the Core i9 9980XE was $1,979, the new Core i9 10980XE is just $979. This makes them a relatively affordable way to get 256GB of RAM – assuming the performance is up to snuff.

On AMD's side, the new Threadripper 3rd Gen CPUs are slightly more expensive than earlier models, but their raw performance is expected to be quite a bit better. What makes us most excited about these processors is not the performance in highly threaded tasks where AMD has typically been strong, but the fact that single-threaded performance has been drastically improved. The previous generation Threadripper CPUs were frankly terrible for After Effects, but these new models should (at least in theory) be great even in lightly threaded applications like this. 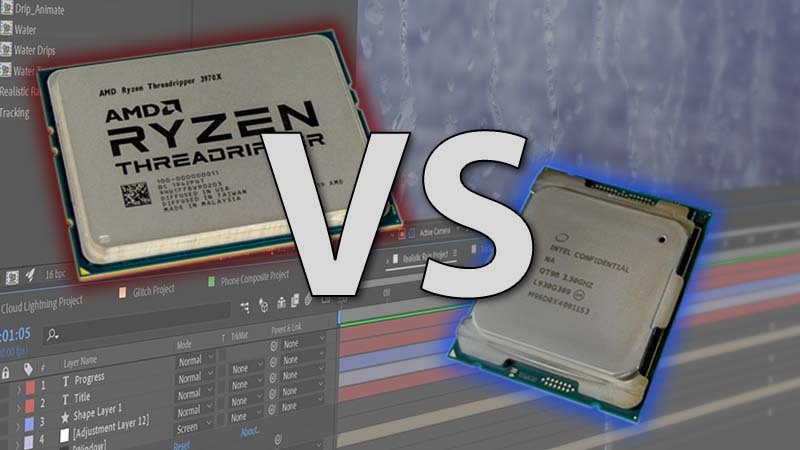 In this article, we will specifically be examining the performance of these new CPUs in After Effects, although on our article listing page, we also have a range of similar posts examining other applications. If you would like to skip over our test setup and benchmark sections, feel free to jump right to the Conclusion.

First, due to the fact that many of the platforms we are testing support different speeds of RAM depending on how many sticks you use and even whether those sticks are single or dual rank, we have decided to standardize on using four 16GB sticks of whatever the "middle" supported RAM speed is (rounding up when applicable). This means that the latest Ryzen, Threadripper, and X-series platforms are using DDR4-2933 while the Intel 9th Gen and previous generation Threadripper/X-series platforms are using DDR4-2666.

The second thing to note is that we are using a version of our After Effects Benchmark that is not yet released to the public. The scores from this upcoming version are completely interchangeable with the version you can currently download; we have just made a few usability and stability improvements. This means that you are free to download the version that is currently available to compare your system to the results in this post.

While our benchmark presents various scores based on the performance of each test, we also like to provide the individual results for you to examine if you want to. If there is a specific task that is a hindrance to your workflow, examining the raw results for that task is going to be much more applicable than the scores that our benchmark calculated.

Feel free to skip to the next section for our analysis of these results if you rather get a wider view of how each CPU performs in After Effects. 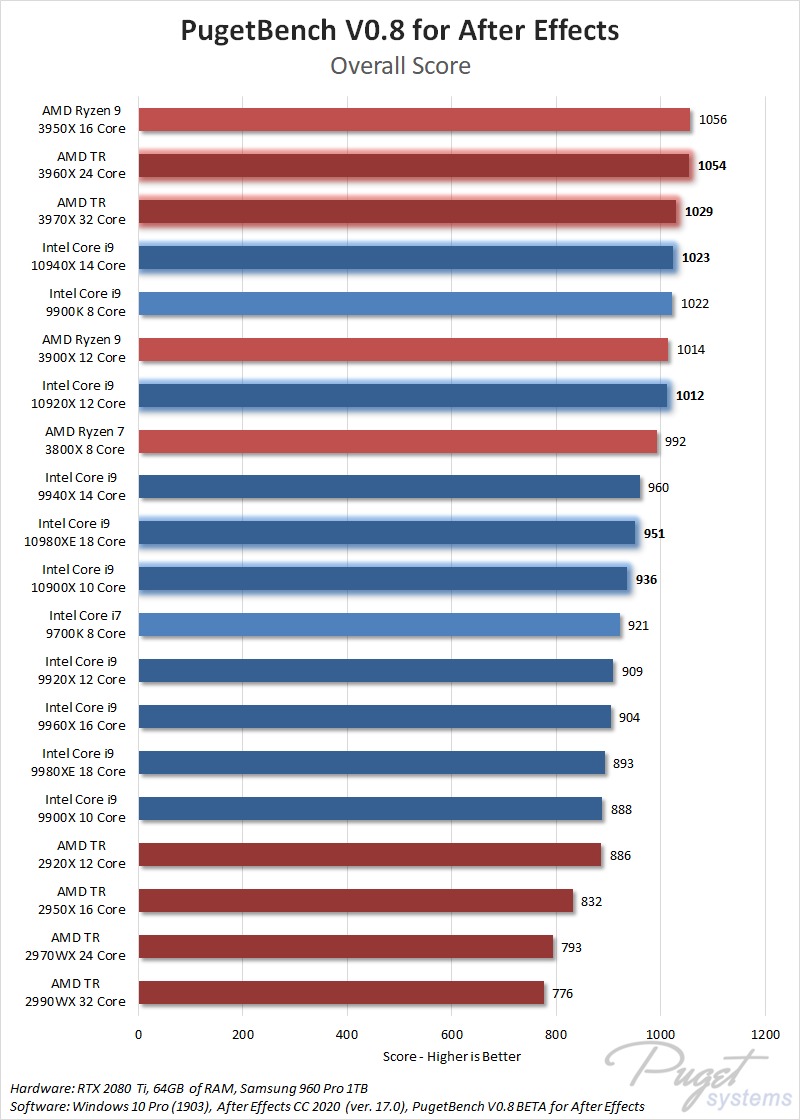 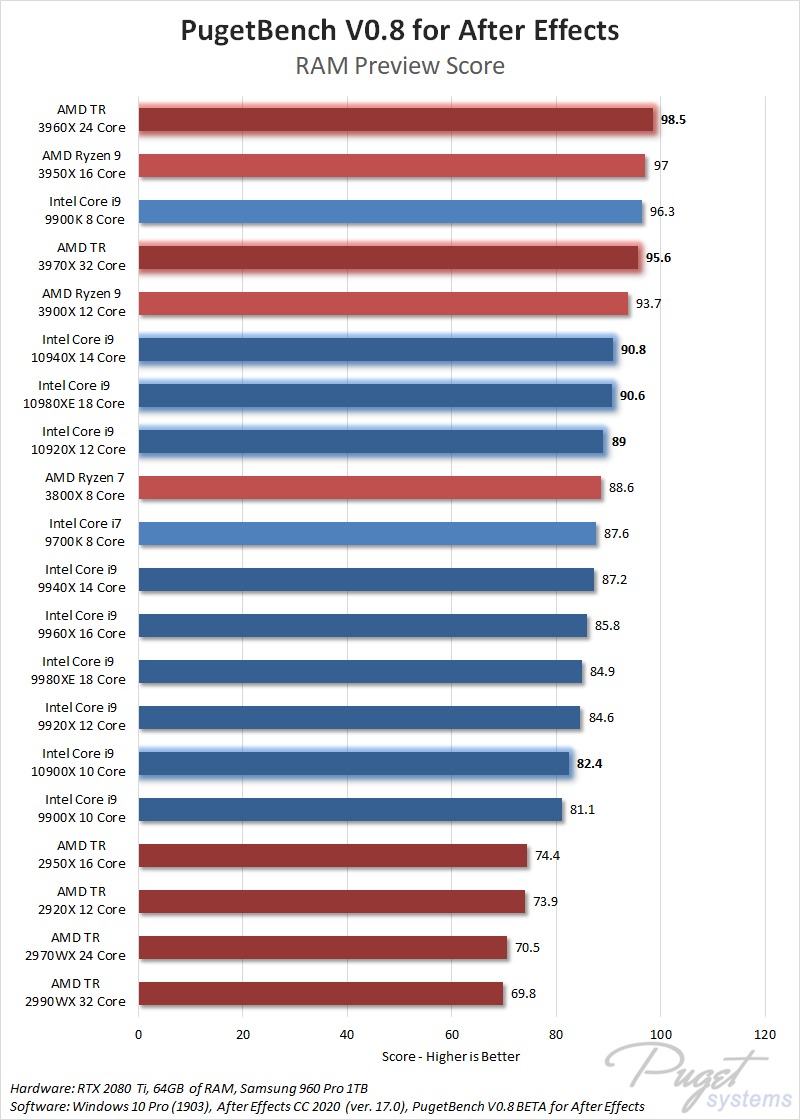 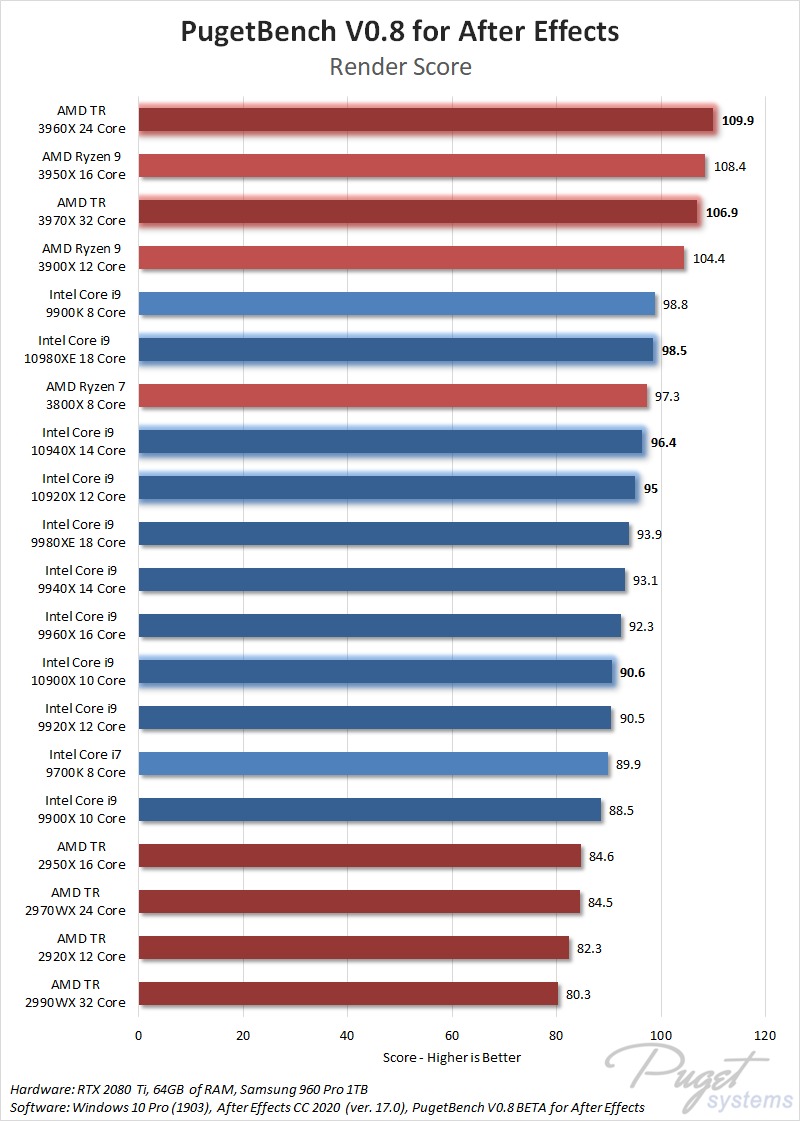 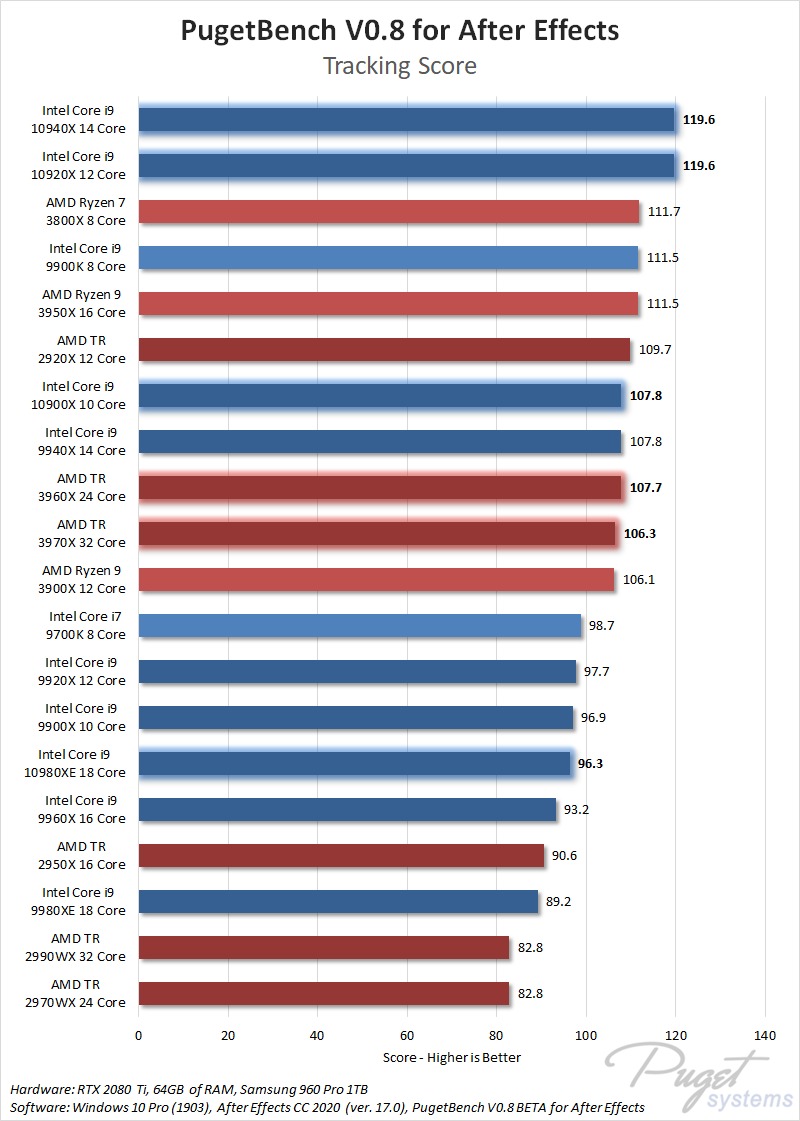 Since After Effects is currently only able to effectively utilize a handful of CPU cores, many of the high-end CPUs from AMD and Intel are going to have relatively similar performance since their maximum Turbo speeds tend to be very close. This means that outside a few isolated cases, you are rarely going to get significantly worse performance in After Effects with any of the new CPUs we tested. However, there are some nuances here, so let's examine the results in closer detail.

First of all, AMD's new 3rd Gen Threadripper CPUs are great, although as we have seen in many other lightly threaded applications, the 3960X 24 core is actually a bit faster overall than the 3970X 32 core. The performance over the previous generation is especially impressive as both these processors are roughly 30% faster than the Threadripper 2970WX/2990WX. Having said that, it is worth pointing out that the AMD Ryzen 3950X overall gives almost identical performance, which will make the higher price of the new Threadripper CPUs hard to justify for many users.

On Intel's side, the story is fairly similar. Here, the 10920X 12 core and 10940X 14 core seem to be the sweet spot, with both of these CPUs performing overall within a few percent of AMD's 3950X and 3960X processors. However, much of that comes from their higher tracking performance. In terms of RAM Preview and rendering performance, they are around 10% slower than the AMD 3950X/3960X and even the more affordable Intel Core i9 9900K performs on par or better.

Of course, while the performance of your CPU is obviously important, in many cases the amount of RAM in your system will also make a huge impact on the overall performance of your system since it allows you to store more frames in RAM Preview. If you work with 4K+ projects that are more than a minute or two long (or lower resolution, but longer projects), the ability to have 256GB with either the new Intel X-series or AMD Threadripper CPUs can be highly beneficial. If you want a rough idea about how much RAM you likely need, we recommend checking out the guideline charts on our After Effects Hardware Recommendations page.

Are the Intel X-10000 Series or AMD Threadripper 3rd Gen CPUs better for After Effects?

If you are simply looking for the best performance in After Effects, there are plenty of options that are more affordable than the Intel X-series or AMD Threadripper processors that will get you nearly the same performance. For example, the AMD Ryzen 9 3900X/3950X and the Intel Core i9 9900K are all terrific for After Effects and cost a fraction of these HEDT processors. However, for users that work with longer and higher resolution projects, the ability to use up to 256GB of RAM with either the AMD Threadripper 3rd Gen or Intel X-10000 series can be a major benefit.

For those that need 256GB of RAM, choosing between an X-series CPU and a Threadripper CPU is a tough call. if you want the best performance, the AMD Threadripper 3960X 24 core was the fastest CPU we tested for both RAM Preview and rendering, coming in at about 8-14% faster than the Intel Core i9 10940X (which was the best overall X-series CPU). On the other hand, the Core i9 10940X is faster for tracking and is significantly less expensive with an MSRP that is about $600 less. If you already have a need for 256GB of RAM, that difference in price may be what allows you to afford it or lets you upgrade other components in the system that can make back some of that performance difference, or simply keeps you with budget.

All in all, most users that have a need for one of these new CPUs are likely going to find themselves choosing between the Intel Core i9 10940X (or possibly the 10920X) and the AMD Threadripper 3960X. Which one is right for you is primarily going to depend on your exact budget, but definitely keep in mind that there are other factors you need to consider. For example, if you need Thunderbolt you pretty much need to stick with Intel as there are no AMD platforms that currently have certified Thunderbolt support – and no, we don't count ASRock's Ryzen boards that are using uncertified Thunderbolt implementations.

In addition, you need to factor in the other applications that are a regular part of your workflow. The benchmark results in this article are strictly for After Effects and the relative performance will vary widely between different applications. If your workflow includes other software packages (we have similar articles for Photoshop, Lightroom Classic, Premiere Pro, DaVinci Resolve, and many others), you need to consider how the processor will perform in all those applications. Be sure to check our list of Hardware Articles to keep up to date on how all of these software packages perform with the latest CPUs.