Skip to content
Always look at the date when you read an article. Some of the content in this article is most likely out of date, as it was written on November 14, 2019. For newer information, see Pix4D 4.4 CPU Performance: AMD Ryzen 9 3950X

AMD's new Ryzen 3rd generation processors feature both an increase in core count and per-core performance, allowing them to rival and sometimes beat Intel's mainstream Core processors in professional applications. Since AMD has finally released the top model in this series, the Ryzen 9 3950X, we decided to take a look at how it and some other competing CPUs handle Pix4D – which benefits from both core count and clock speed at various points throughout its workflow. 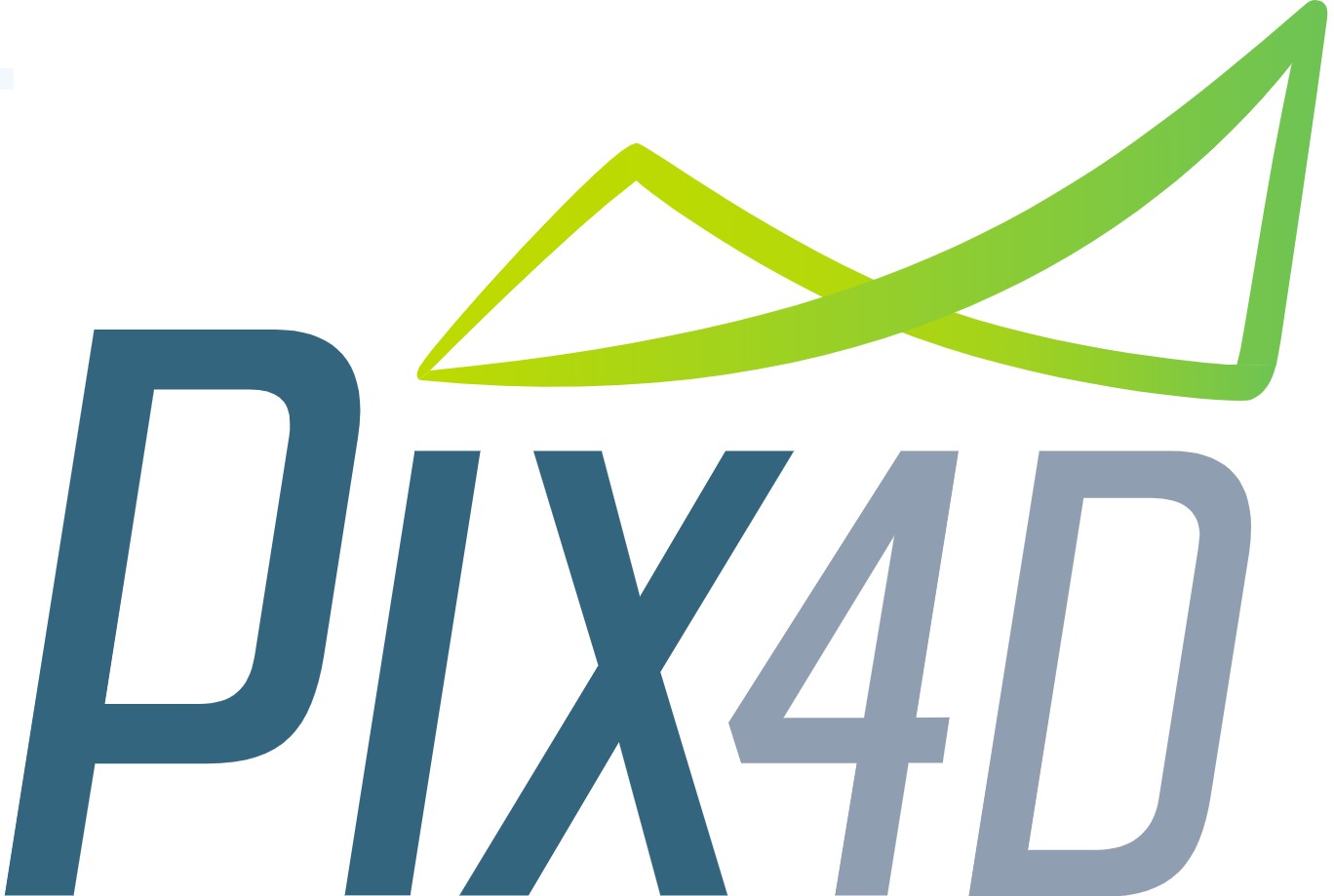 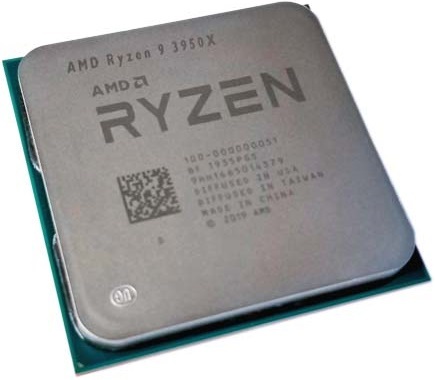 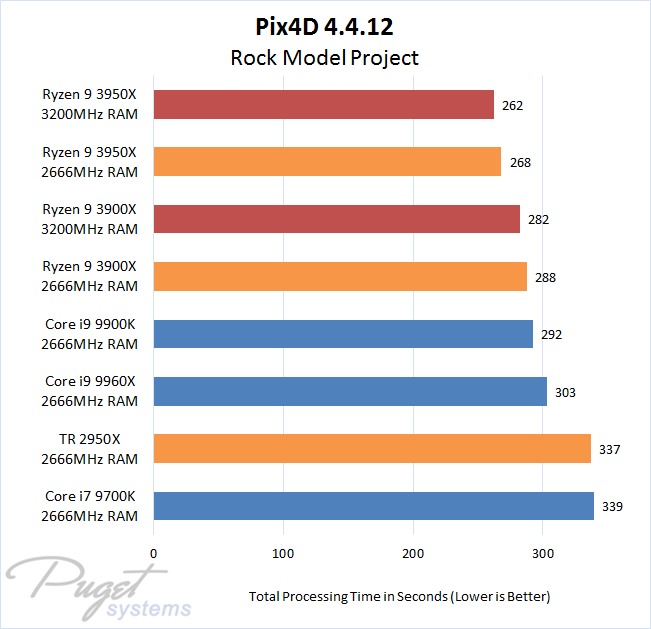 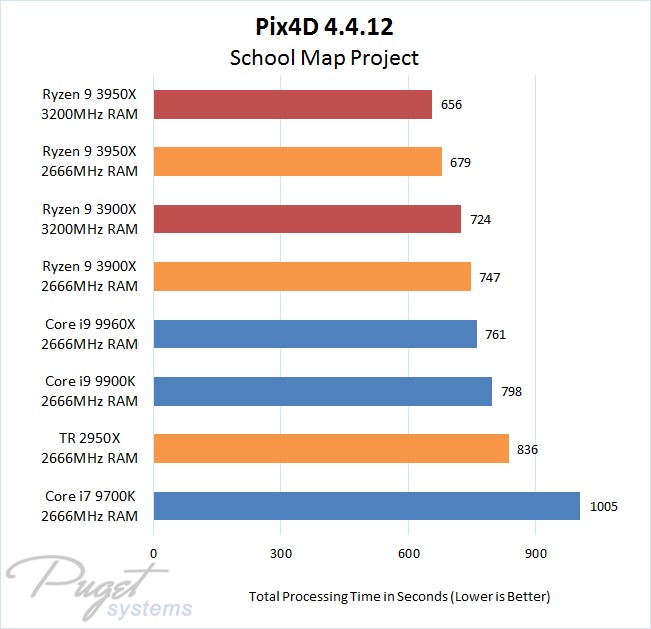 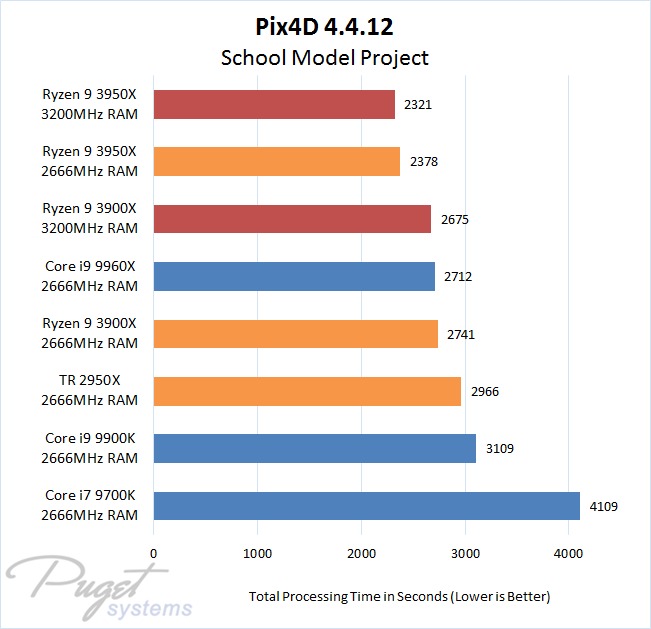 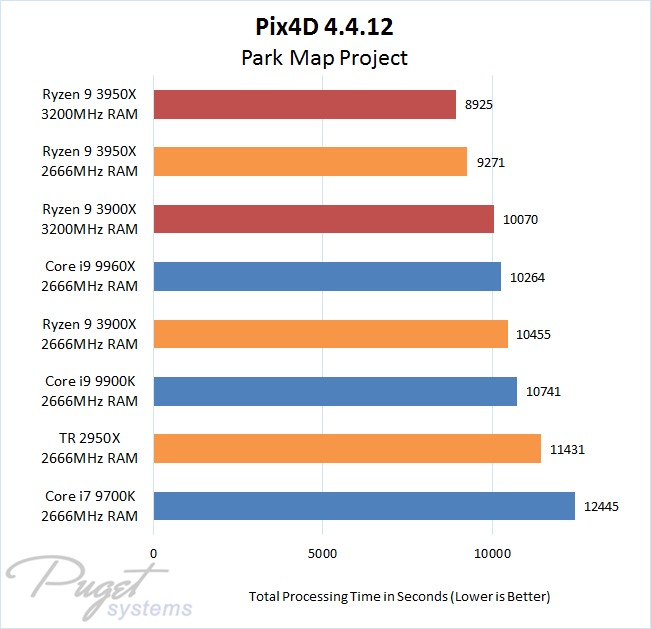 For those who want to dig further into the differences in how each CPU performed, here is a table showing the times for each step within Pix4D on each of the image sets:

AMD has pulled out a massive win here, taking a substantial lead over Intel's processors in Pix4D! The new Ryzen 9 3950X is at least 10% faster than any of the Intel processors we tested – both those with higher clock speeds (the Core i9 9900K) and with the same core count (the Core i9 9960X). Even the 3900X fared very well, usually coming in around the same range as one of the Intel processors but often for a much lower price.

Looking at memory speed on the Ryzen platform, there is about a 3% difference in overall performance when using 3200MHz memory versus 2666MHz. Unfortunately, sticking to AMD's official supported memory specs means that you could only get 32GB with the higher speed – since 3200MHz is only supported with just two memory modules – but this small performance delta means that you can get more RAM (which is often important for photogrammetry) without taking a big hit on processing time.

With very strong performance results across all of our Pix4D tests, it is easy to make a single processor recommendation: AMD's Ryzen 9 3950X is currently the fastest processor for Pix4D. More CPUs are coming soon, from both Intel and AMD, so that may change – but for now it is the clear winner in this application. We plan to offer it in our systems when AMD releases it for sale on November 25th.