The new 13th Gen Intel processors do extremely well in Unreal Engine, showing a solid 25-29%performance gain versus the previous 12th Gen Intel CPUs. At the top end, the Ryzen 9 7950X holds onto its lead and outperforms the Intel 13900KS by 8% on average, while being $100 more. This means Ryzen is still the top performer in consumer grade CPUs. The 13900K is evenly matched against the more similarly priced Ryzen 7900X, with performance only being a few percent different.

Lower down the stack, the Intel takes a commanding lead with 13700K being 57% faster than the Ryzen 7700X. The 13700K actually scored high enough to match AMD's 5950X, the top CPU we would have recommended just a month ago. The 13600X achieves a 53% lead over the Ryzen 5600X. Intel's budget CPUs give an enormous bang for the buck and leave AMD in the dust.

The last few months has seen a flurry of product launches. Only a few weeks ago, AMD launched their new Ryzen 7000 series CPUs and new motherboards. Then Intel delivered the new video cards, the Ark A750 and A770, followed less than a week later by Nvidia’s new flagship GPU, the GeForce RTX 4090.

And now, Intel is launching their new 13th Gen Intel Core processors – code named "Raptor Lake". Unlike AMD's Ryzen 7000 Series, the Intel 13th Gen processors should be able to be dropped into any motherboard that supports the previous 12th Gen CPUs, and maintain support for both DDR4 and DDR5 memory. We did get a bump in terms of what RAM speed is officially supported, but from a platform view, the 13th Gen is pretty much a drop-in upgrade from 12th Gen.

Over the past few years, the demand for Unreal Engine systems has skyrocketed. Not just driven by tremendous growth in the video game industry, but a wide variety of industries have begun implementing real-time engines into their workflow. This is especially true for the film and television industry, and their pivot to Virtual Production. Many of the biggest performance hurdles faced by Unreal Engine users are improved with high core count CPUs. This is especially true if you are compiling the game engine source code, or compiling shaders large amounts of shaders.

However, many users aren’t compiling the full engine source code on a daily basis or dealing with 10s of thousands of shaders being updated by their 500-person dev team. They want to know what kind of performance they can expect with consumer-grade hardware. It is important to find that balance for your specific workflow. 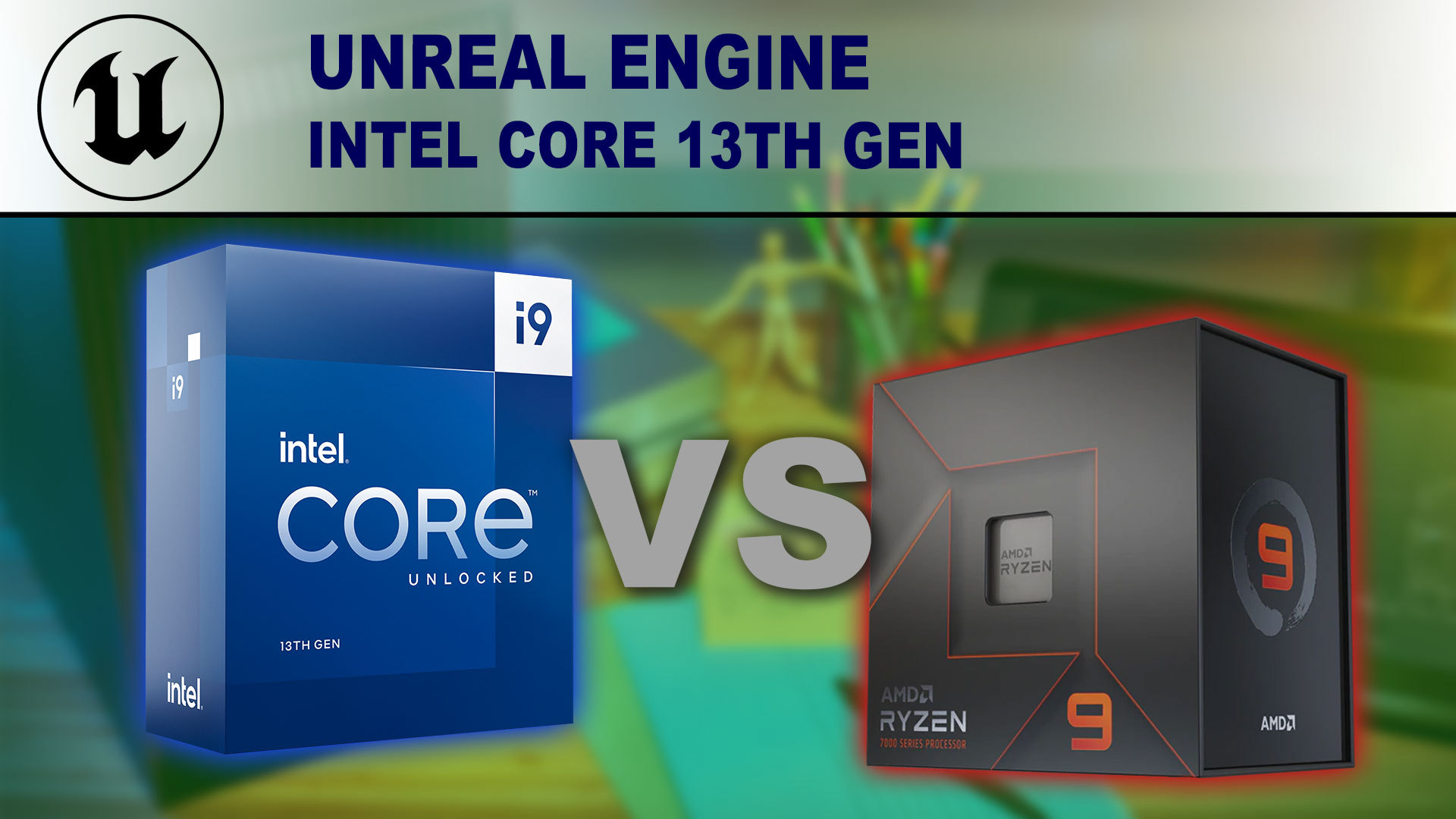 In this article, we will be using Unreal Engine and Visual Studio to examine the performance of the new 13th Gen Intel Core Processors and compare them to AMD's Ryzen 7000 series, as well as the previous 12th generation Intel Core CPUs.

If you want to read more about the new ntel Core 13th Gen CPUs and what sets them apart from the previous generation, we recommend checking out our main 13th Gen Intel Core Processors Content Creation Review article. That post includes more detailed information on the CPU specifications, testing results for a range of other applications including Lightroom Classic, Premiere Pro, After Effects, and Unreal Engine; as well as all the test setup details for both the hardware and software used in our testing. Also in this testing we are not using Precision Boost Overdrive (PBO) on AMD or MultiCore Enhancement (MCE) on Intel so we can see the baseline performance. Each will give their respective CPU a few extra percent while consuming more power and making more heat. To read more about those features and why we aren’t using them, you can refer to the articles on the Impact of PBO and the Impact of MCE 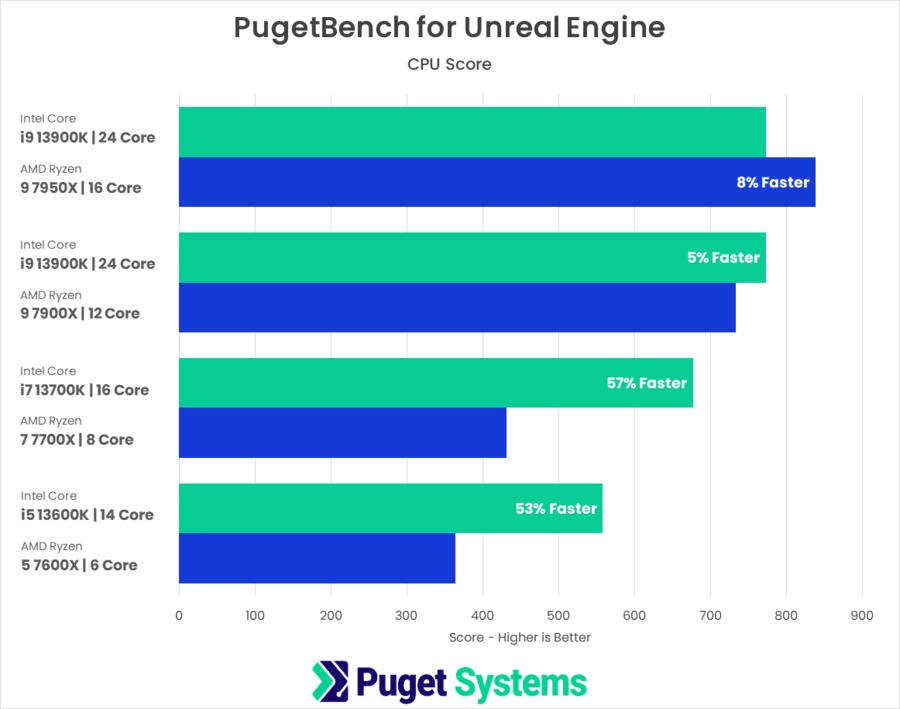 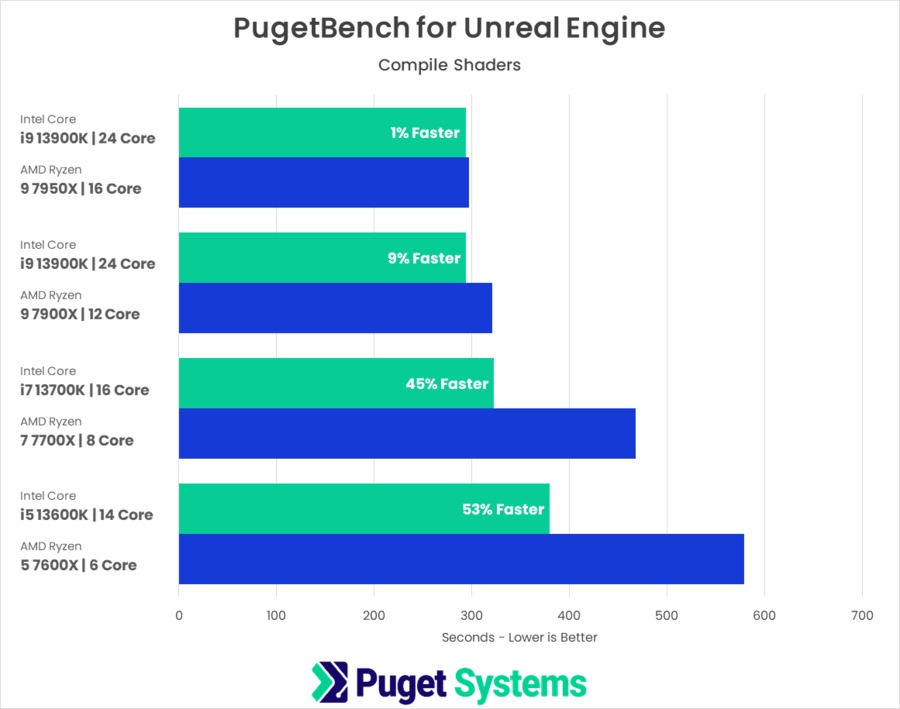 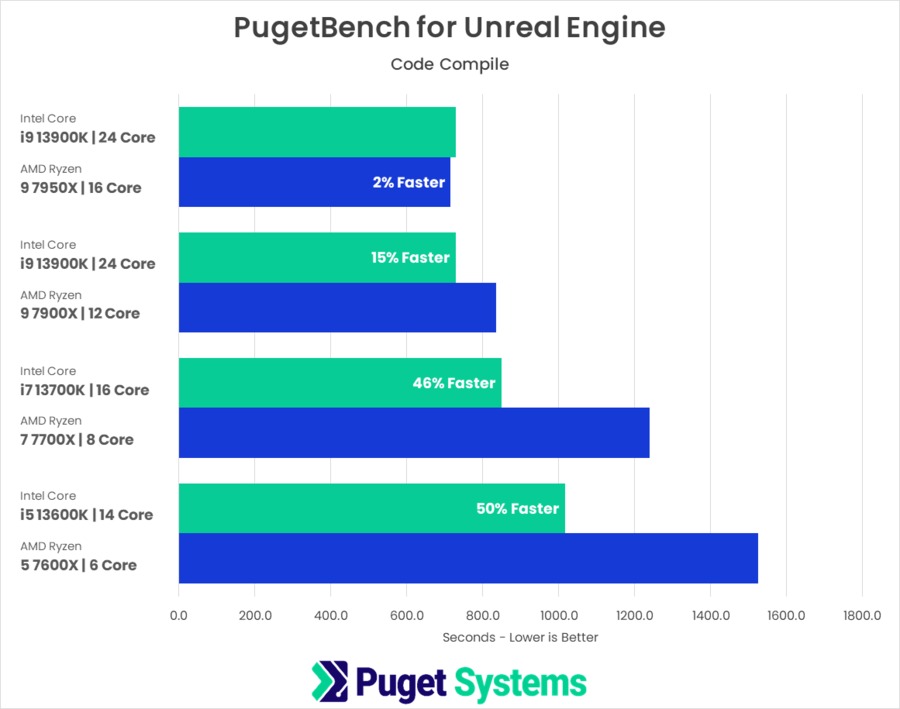 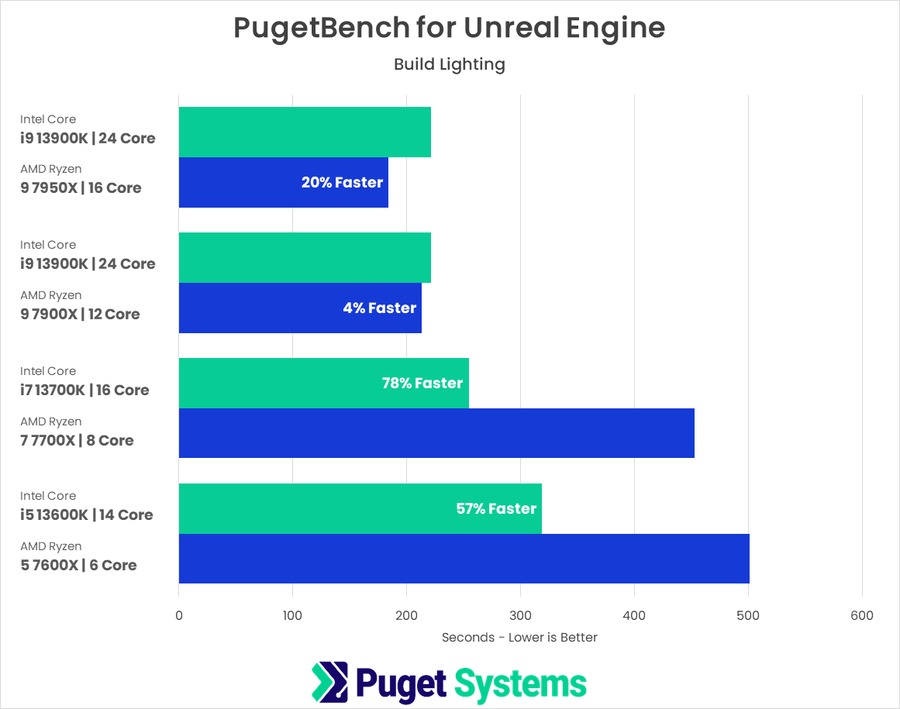 To start off our analysis, we wanted to look at how the new Intel Core 13th Gen compares to the recently released AMD Ryzen 7000 processors. The MSRP pricing for Intel and AMD don't exactly match, but in most cases, the comparisons we are making in the chart above are looking at CPUs that have an MSRP within $40 of each other. We have a full breakdown of the MSRP of each of these CPUs in our main AMD Ryzen 7000 Series Processors Content Creation Review article if you want to get into the specifics.

The three main bottlenecks Unreal Engine users struggle with are compiling the source code (whether to use a pre-released version or to package up a custom game project), light baking on the CPU, or just compiling shaders. AMD’s Ryzen 5000 series previously held the lead in these tasks.

Comparing the new Intel 13th gen to AMD’s Ryze 7000 series we see Intel make huge strides in closing the gap on the top end. On average the Ryzen 7950X is 8% faster than the Intel 13900K, but the Ryzen also costs $110 more. Much of this lead is due to the Build Lighting test, where the 7950X was 20% faster than the 13900K. Looking at Shader and Code compile, the two CPUs are virtually tied. Do note that while they have different core counts, they have the same number of threads. This is because AMD allows for multithreading on all of its CPU cores, While Intel only have hyperthreading on 8 of its 24 cores. The result is both will appear as having 32 logical cores in Windows.

The 13900K is much closer in price to the Ryzen 7900X, with a difference of only $40. Here Intel is faster at compiling source code and shaders, while AMD holds onto its lead in Light baking. On average, Intel’s 13900K is 5% faster, while being 7% more expensive. At this level, either CPU will serve the end user well.

Moving on to the lower-end parts, the story changes and Intel takes a strong lead. This says a lot about the performance of Intel’s parts and the amazing value they provide. The Intel Core I7 13700k offers more cores and threads than AMD, while only being $10 more expensive. This translates into a massive 57% lead in performance for Intel. This is even after fixing the issues that plagued the Ryzen 7700X in our initial review. What is even more impressive is that the 13700K manages to edge out the previous top CPU, the Ryzen 5950X. When the 5950X debuted, it cost twice as much as the 13700K.

This massive performance lead is seen in the final CPU, the Intel Core i5 13600k. This CPU averages 53% faster than Ryzen 7600X, while only costing $20 more. We do not recommend any CPU with 8 or fewer cores, so Intel's new 13600K provides a great entry-level CPU for Unreal development. 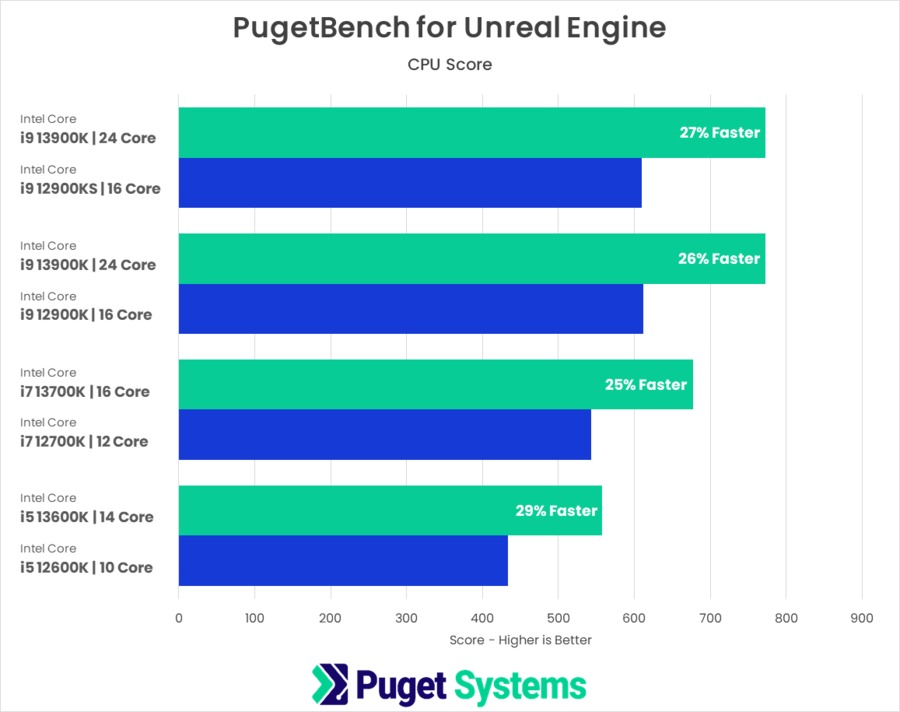 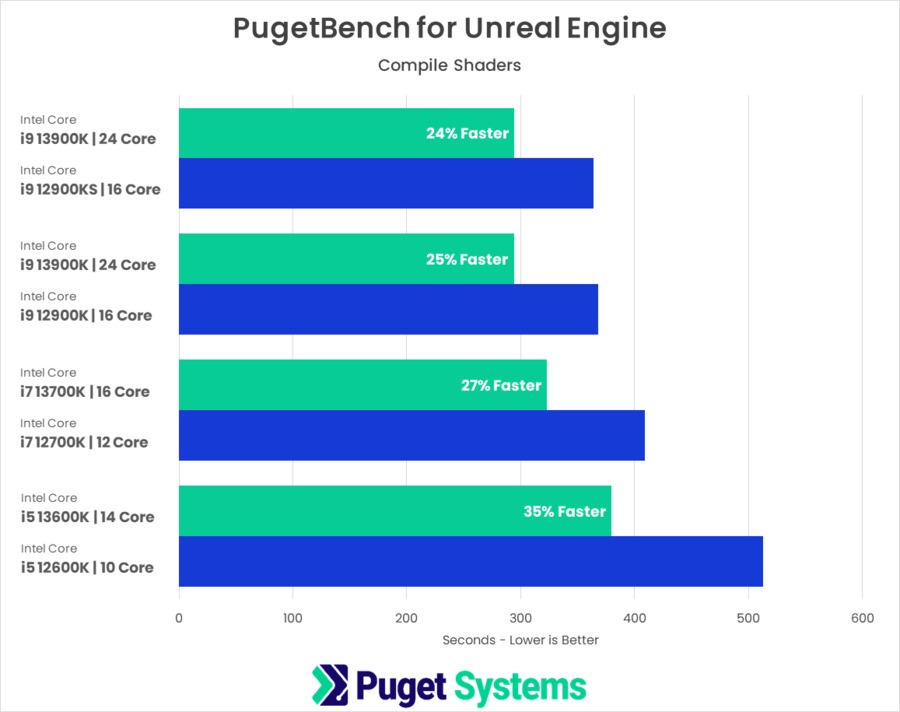 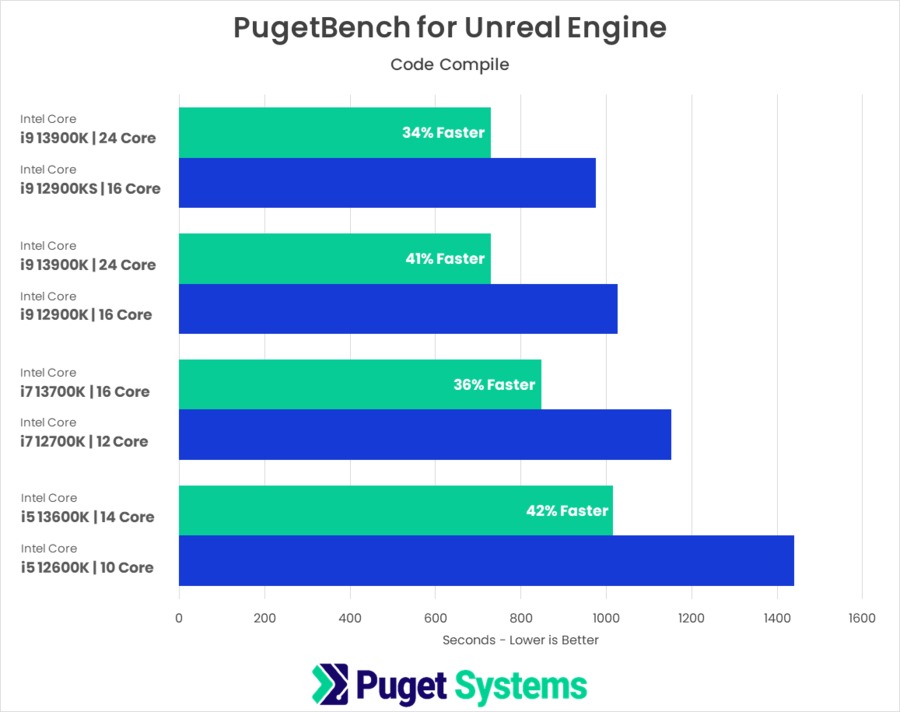 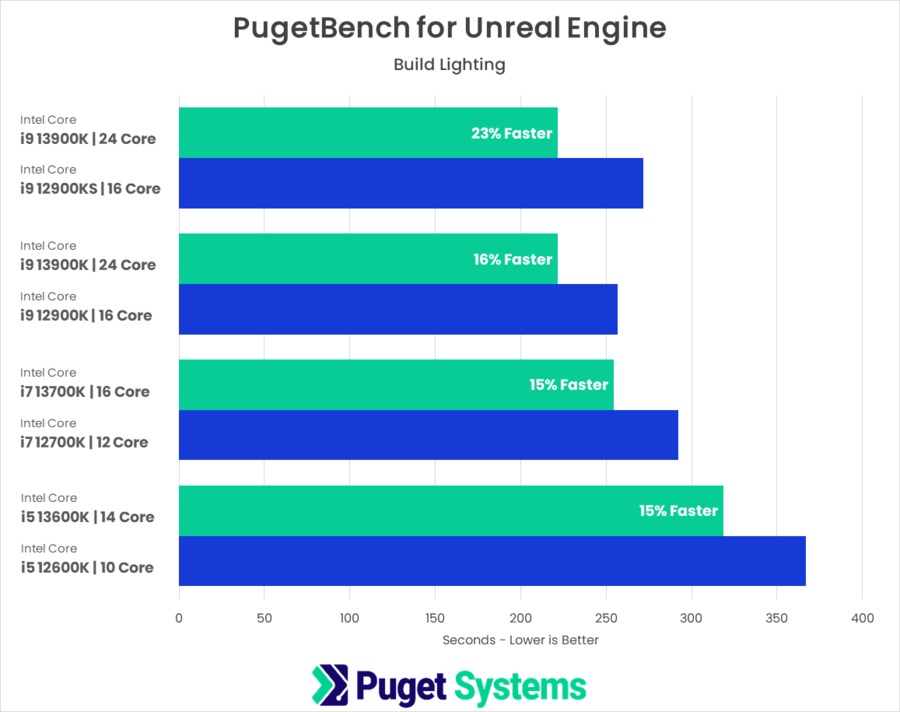 In the previous section, we examined how the new Intel 13th gen stacks up against AMD Ryzen 7000 series CPUs, but we should also examine how they compare to the previous generation Intel 12th gen. Core counts have changed slightly, with an increase in E-cores for all CPUs.

As we can see from the chart, there is a 25-29% improvement on most of the new CPUs. The biggest gain here is in compiling source code in Visual Studio. There we saw anywhere from 34-42% faster compile times. No doubt this is due to the extra efficiency cores that have been added. Build lighting didn’t see as much of an improvement, with only a 15-23% uplift over the previous generation. This is a task that Intel hasn’t excelled at, and one that is increasingly moving to the GPU, so not everyone will be worried about this score.

One question that we frequently receive, and is often found online, is how do these CPUs impact the potential frames per second while using Unreal Engine. Because Unreal is a game engine, many people look at gaming benchmarks to get a sense of what to expect. However, this has many flaws. Usually in gaming benchmarks for a CPU, they test in a resolution such as 1080p, and lower the game’s graphical settings to the lowest. This is done so that they can create a bottleneck in the CPU, where the GPU is processing frames faster than the CPU can handle, often in the hundreds of frames per second. However, when using a higher resolution, such as 4k, and with graphical settings maxed out, and ray tracing enabled, the GPU becomes the bottleneck because it is working so hard for each frame. In this case, most modern CPUs are literally waiting for frames to be finished so they can move on to their next task. This is how those in Virtual Production or Architecture will be using Unreal, in higher resolutions with as many high quality visual effects as possible. GameDev sits in the middle. For competitive gameplay the higher FPS is useful, but during the actual development cycle, going from 60 FPS to 120 doesn’t provide a tangible benefit. 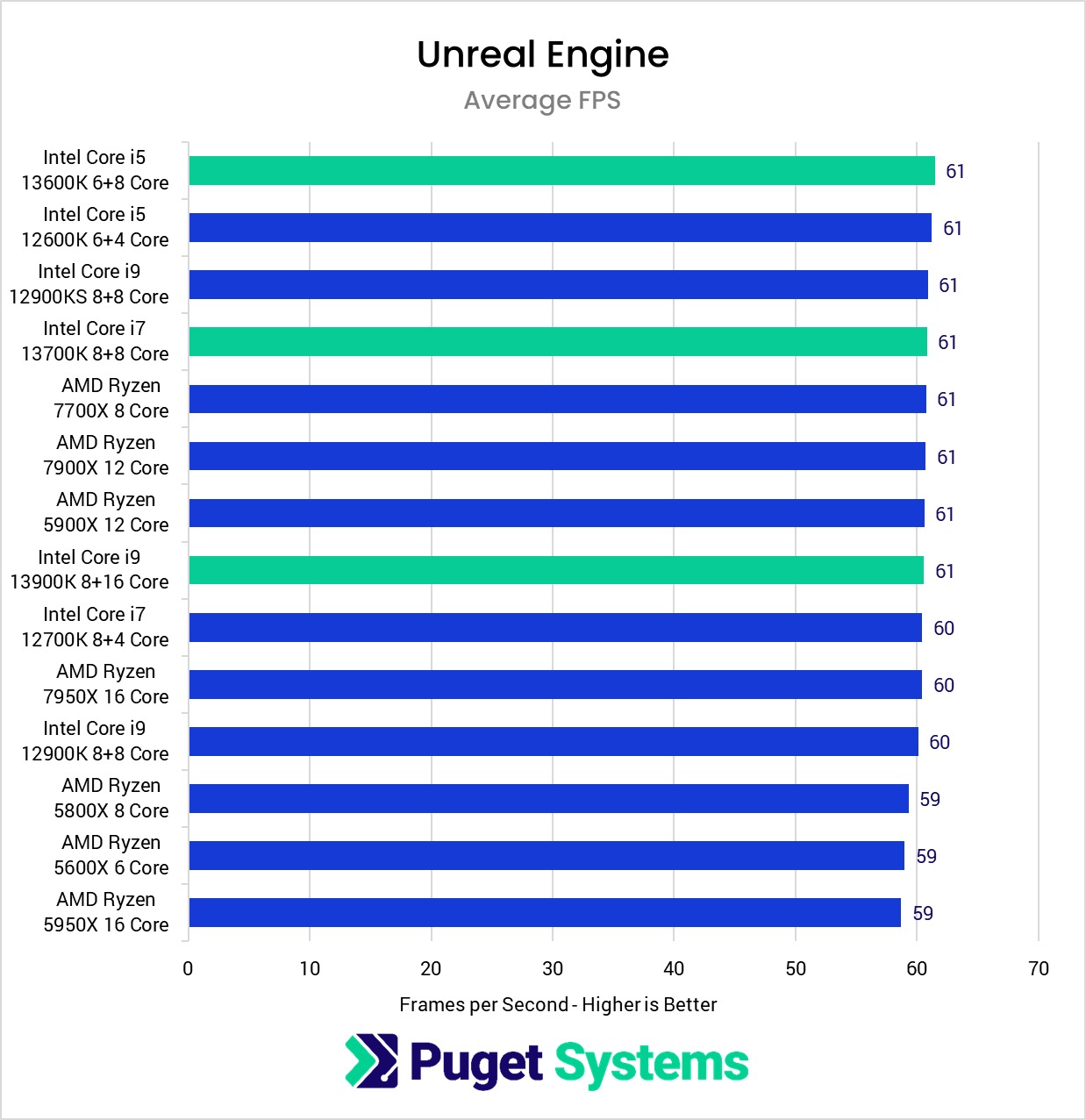 As we can see from the above chart, which averages the FPS in 4 different scenes, at 1080p, 1440p, and 4k, with and without ray tracing, there is only a 2 frame difference from the top to bottom of the chart. Not only that, but no strong pattern emerges. CPUs with CPUs with very high clock speeds, such as the 12900KS at 5.5 GHz, is next to the 12600K at 4.9 GHz. The CPU with the highest clock in this chart is the new 13900K at 5.8 GHz, yet that is in the middle, while the lower clocked 13600K at 5.1 GHz hit the top of the chart. If we reran these tests I’m sure all the ranking would shift. In the end, if its not for competitive gameplay, but for graphical fidelity, the CPU doesn’t make much of an impact.

How well do the 13th Gen Intel CPUs perform in Unreal Engine?

Intel’s new 13th generation CPUs do very well in Unreal Engine. We see anywhere from 25 to 29% improvement over their last generation CPUs. This brings some serious competition to AMD which has held the top spot for quite some time. Intel was not able to topple the top of line Ryzen 7950X, but did come within 10% while being $100 cheaper. Those looking for the absolute best performance without having to upgrade to a Threadripper Pro are still better off with Ryzen. However comparing CPUs that are closer in price, Intel’s 13900K and AMD’s 5900X are nearly equal, each winning and losing different tests. The AMD was faster at building lighting, while Intel was faster at compiling shaders. But in either case it was only a few percent and could swing either direction with a software or bios update.

Keep in mind that the benchmark results in this article are strictly for Unreal Engine and that performance will vary widely in different applications. If your workflow includes other software packages, we highly recommend checking out our 13th Gen Intel Core Processors Content Creation Review article which includes results and links to in-depth testing for a range of other applications including Premiere Pro, After Effects, Lightroom Classic, DaVinci Resolve, and Blender.