With the recently launched AMD Ryzen 7000 Series desktop processors, we saw some terrific performance gains in our Content Creation Review article, but like many other reviewers, we found that these CPUs run extremely hot. Seeing CPU temperatures of 95º Celsius was fairly common, and we were lulled into the mindset that this was normal since it matched what everyone else was seeing and that even AMD was telling people that 95C was "normal".

It turns out, however, that these high temperatures are not at all what we should be seeing with these new CPUs.

The issue is that the motherboard we used (the Gigabyte X670E AORUS MASTER) was defaulting to overclocking the CPU beyond AMD's official specifications. From what we have seen, this isn't restricted to Gigabyte motherboards, but something that almost every brand seems to be doing. This also isn't something entirely new, or restricted to AMD. On the Intel side, we have dealt with a setting called "MultiCore Enhancement" for years, which allows the CPU to run all the cores at the maximum boost frequency when they should be scaling based on the number of cores that are being used.

In the case of our X670E motherboard, it is two specific settings that we found to be causing the CPUs to run at dramatically higher temperatures:

These two settings are similar, and in many ways two sides of the same overclocking coin. CPB allows the CPU to run faster as long as there is thermal and power headroom, while PBO pushes the voltages to allow the CPU to clock higher.

We will note that the Ryzen Master software you can use with the Ryzen 7000 series has some additional ways you can affect things like power draw and temperature – including an "Eco Mode" – but we always prefer to do our configurations directly in the BIOS. Especially since many settings are not saved across user profiles, or after we sysprep Windows to prepare it for the end user, we try to avoid software-based settings as much as possible. 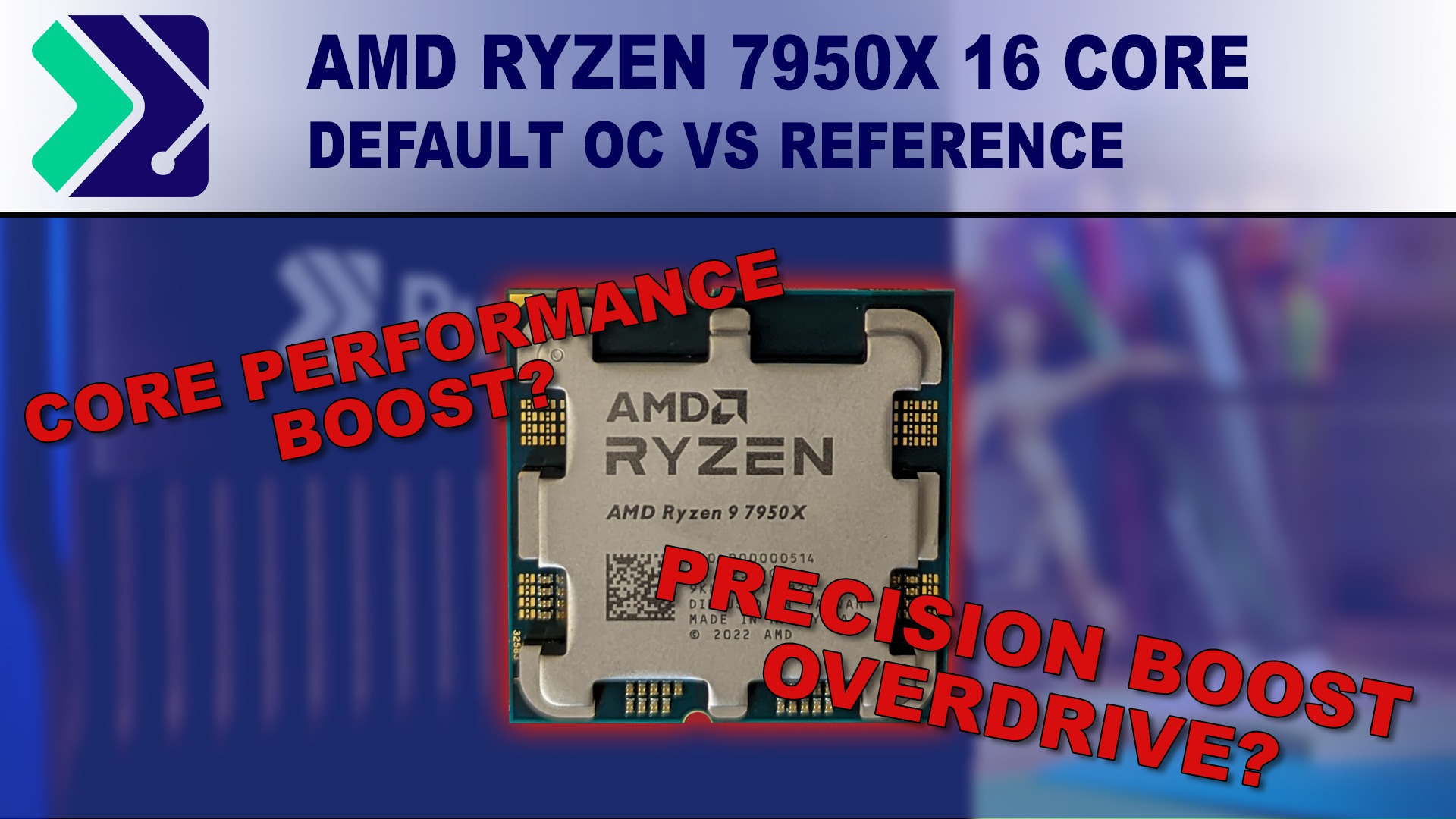 As a workstation system integrator, we almost always prefer to run hardware at the reference speeds in order to maximize reliability. In the past, these settings were typically disabled by default, but it looks like with the Ryzen 7000 series, motherboard manufacturers have decided to default to automatically overclocking the CPU. And to make it worse, they don't do much to notify the end user that their CPU is being overclocked by default.

The question we now have to answer is twofold: What kind of performance are we giving up by disabling this auto-overclocking, and what impact does it have on CPU temperatures? If the performance drop is large and the CPU temperatures isn't affected much, we may have to reevaluate our stance on these settings in our testing and workstations. On the other hand, if the performance drop is minimal, but the CPU temperature drops significantly, that reinforces our view that (again, for us as a workstation manufacturer) it is better to disable these auto overclocking settings.

To see how PBO and CPB affect performance and CPU temperatures, we are going to focus on the AMD Ryzen 9 7950X 16 Core processor. For the CPU cooling, we will be using two different CPU coolers: our go-to standard Noctua NH-U12A 120mm air cooler, as well as the Fractal Celsius+ S28 Prisma 2x140MM AIO liquid cooler. We almost exclusively use air coolers in our workstations, but we wanted to be sure that we were not leaving performance on the table due to thermal throttling.

All of our testing is done on an open-air test bed in order to remove the chassis airflow from the equation. We want to drill down on these auto overclock settings, and remove as many other variables as possible. With that goal in mind, we also set the CPU fan to run at 100% so that the fan ramping profiles wouldn't come into play. 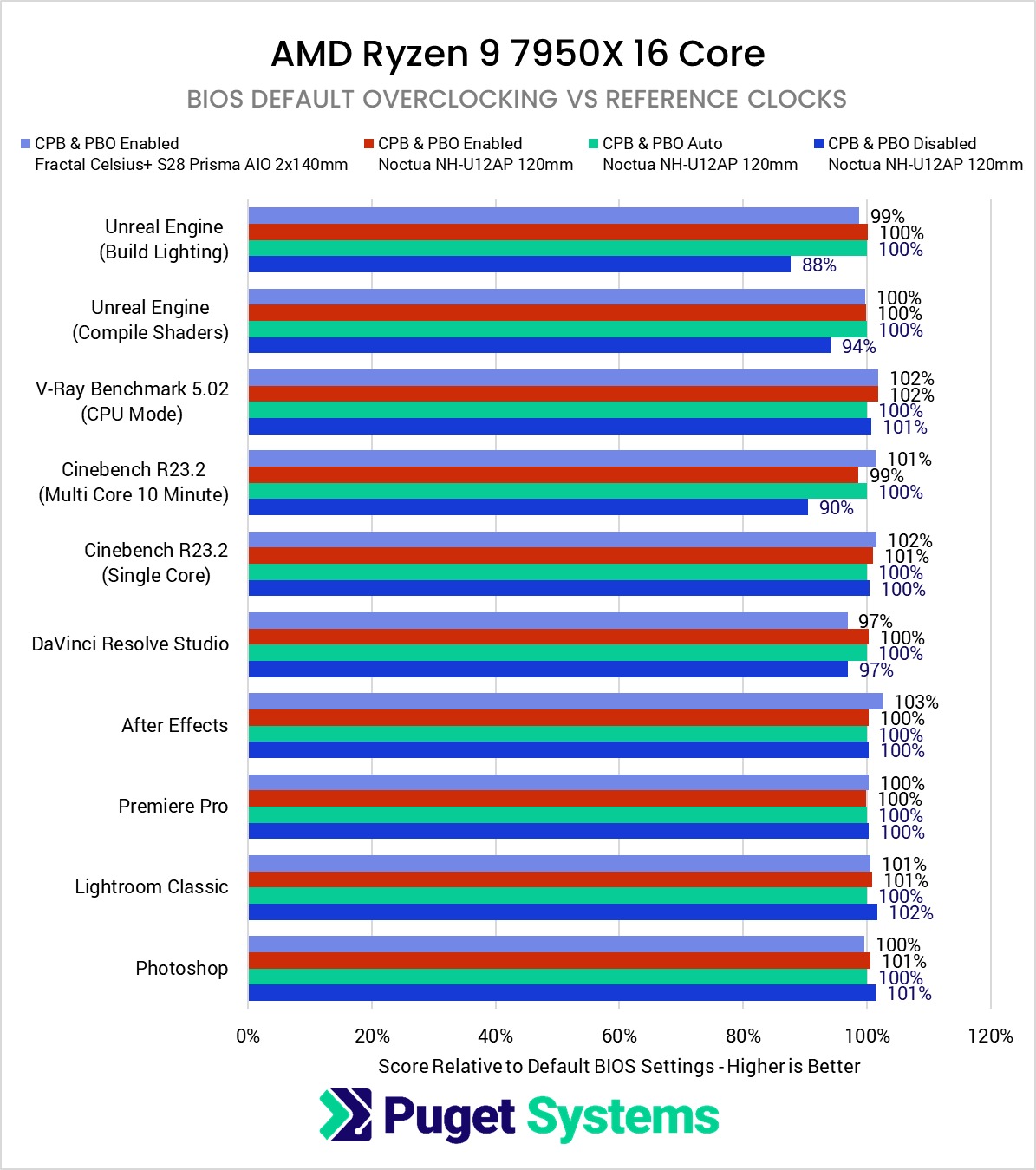 In the chart above, we tested with Precision Boost Overdrive (PBO) and CPB (Core Performance Boost) set to disabled, auto, and forced enabled with the Noctua 120mm cooler. In addition, we did a round of testing with PBO and CPB enabled while using the Fractal 2x140mm AIO liquid cooler in order to see if having additional cooling power would impact the results.

On the whole, we were a bit surprised at how little of an impact these overclock settings made. All of our photo and video editing benchmarks saw virtually no difference in performance, with the largest variance being just 3%, which is within the margin of error for this kind of real world testing. Even Cinebench single core and V-Ray rendering in CPU mode was no different with any of the settings or coolers.

Compiling shaders in Unreal Engine, on the other hand, saw a smaller 6% performance drop with PBO and CPB disabled. This is on the edge of being significant, and may not even be noticeable in the real world.

Basically, this means that the biggest impact on performance these overclock settings make tends to be on highly threaded workloads. And, even then, the difference is only about 10% at most.

This brings us to our second question: how much do these settings impact the CPU temperature?

To look at how much Precision Boost Overdrive (PBO) and CPB (Core Performance Boost) increase the CPU temperature, we decided to chart out the hottest core reading over the course of our entire automated benchmark run. This makes it a bit harder to read overall than it would be if we broke it down to something like "max CPU temperature in application X", but a lot of our workloads are fairly burst-y, and there are nuances you miss if you simplify things too much.

On the whole, it is amazing how much disabling PBO and CPB reduces the CPU temperature. On heavy sustained loads like Cinebench multi core, we went from 95C to just 65C – that is a 30C drop in CPU temperature!

Even relatively lighter loads like Photoshop went from temperatures ranging from 60-80C with PBO/CPB enabled to just ~42C with them off. Others like Premiere Pro, After Effects, and DaVinci Resolve were frequently hitting 95C with PBO/CPB, and dropped to 40-62C with then disabled. As a reminder, these are workloads that saw no difference in performance, yet the 7950X CPU is as much as 30C, or even 40C, cooler with PBO/CPB disabled.

One last thing to note is that the Fractal 2x140mm AIO liquid cooler made a minimal impact on CPU temperature. This is likely in part due to the fact that we are on an open-air test bed which increases the efficiency of traditional air coolers, but these results make it clear that we are not leaving performance on the table by using a Noctua 120mm air cooler in our testing.

Is Precision Boost Overdrive and Core Performance Boost Worth it for Content Creation?

In most of the workloads we tested, it is very clear that using Precision Boost Overdrive (PBO) and Core Performance Boost (CPB) is not worth it. Photoshop, Lightroom Classic, Premiere Pro, After Effects, and DaVinci Resolve all showed no difference in performance when we disabled these settings from their "Auto" default, yet the CPU temperature dropped as much as 30C, or even 40C!

It was only the extremely heavy workloads where the CPU is loaded to 100% for sustained periods of time that PBO/CPB gave any amount of performance increase. Even then, however, the performance gain was only about 10% at most, and in exchange, the CPU was often pegged at 95C, versus just 65C with PBO/CPB off. Running the CPU for sustained loads at 95C doesn't seem like a terribly great return for a meager 10% performance boost in our opinion.

What this means is that, going forward, we will be doing the majority of our AMD Ryzen 7000 testing with PBO and CPB disabled. As a workstation manufacturer, reliability is extremely important, and the vastly higher CPU temperatures are simply not worth it for the small performance gains in a limited number of workflows. By no means does this mean we think everyone should turn off these overclocking settings, simply that they don't align with our testing goals, which is to test hardware with an eye towards how they will perform in a workstation setting.

One last thing we want to clarify is that this kind of auto-overclocking is not exclusive to AMD platforms. We deal with it on Intel platforms as well, in the form of MultiCore Enhancement (MCE) and unlocked short/long power limits. We are currently disabling MCE and setting the power limits on all our Intel Core 12th Gen systems and testing, and plan on doing a similar article to this one when the 13th Gen CPUs launch later this month.