Skip to content
Always look at the date when you read an article. Some of the content in this article is most likely out of date, as it was written on February 17, 2020. For newer information, see our more recent articles.

With the launch of AMD's new Threadripper 3990X 64 Core processor, there was a concern by some reviewers that the standard version of Windows 10 Pro was limiting the performance of this powerful CPU. This was largely led by Anandtech's review where they explained that Windows 10 Pro can only handle 64 threads within a single "Processor Group", and since the 3990X has 128 threads when SMT (Simultaneous Multithreading) is enabled, it has to create two processor groups to manage this CPU. In their review, they stated that to get around this issue, you either need to use Windows 10 Pro for Workstations (or Enterprise) or disable SMT, which in a few isolated cases resulted in up to an 8.3x increase in performance.

On the other hand, Tom's Hardware put up a post about how they did not see any benefit to using Windows 10 Enterprise, and that AMD themselves told them that "Higher editions/versions of Windows 10 confer no additional performance or compatibility benefits to the processor".

Due to the concern about Windows 10 Pro holding back the Threadripper 3990X, we decided to do additional testing with the 3990X and a number of other processors to see if using Windows 10 Pro for Workstations or disabling SMT/HT can result in significant performance gains. We cannot speak for many of the tests that Anandtech and Tom's Hardware use, but in this article, we are going to focus on one of our specialties: Adobe Creative Cloud. 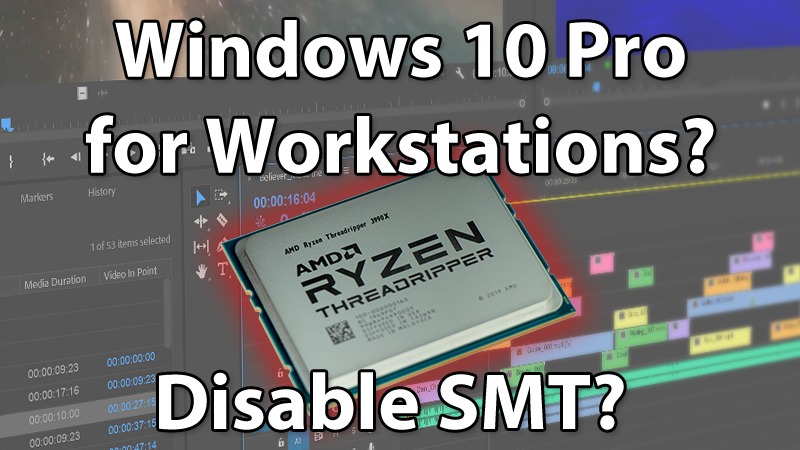 The second thing to note is that we are using Noctua air coolers on all of our test platforms. We do plan on upgrading to the Noctua NH-U14S TR4-SP3 for the Threadripper CPUs in the future as that is what we will be using in our workstations, but in our air-conditioned Labs environment on open-air testbeds, we did not encounter any significant performance degradation with the NH-U12S TR4-SP3 and wanted to limit the number of variables between this set of testing and the testing we did right when the 3990X launched.

Feel free to skip to the next sections for our analysis of these results to get a wider view of how each the different OS and SMT/HT configurations perform in Premiere Pro, After Effects, Photoshop, and Lightroom Classic. 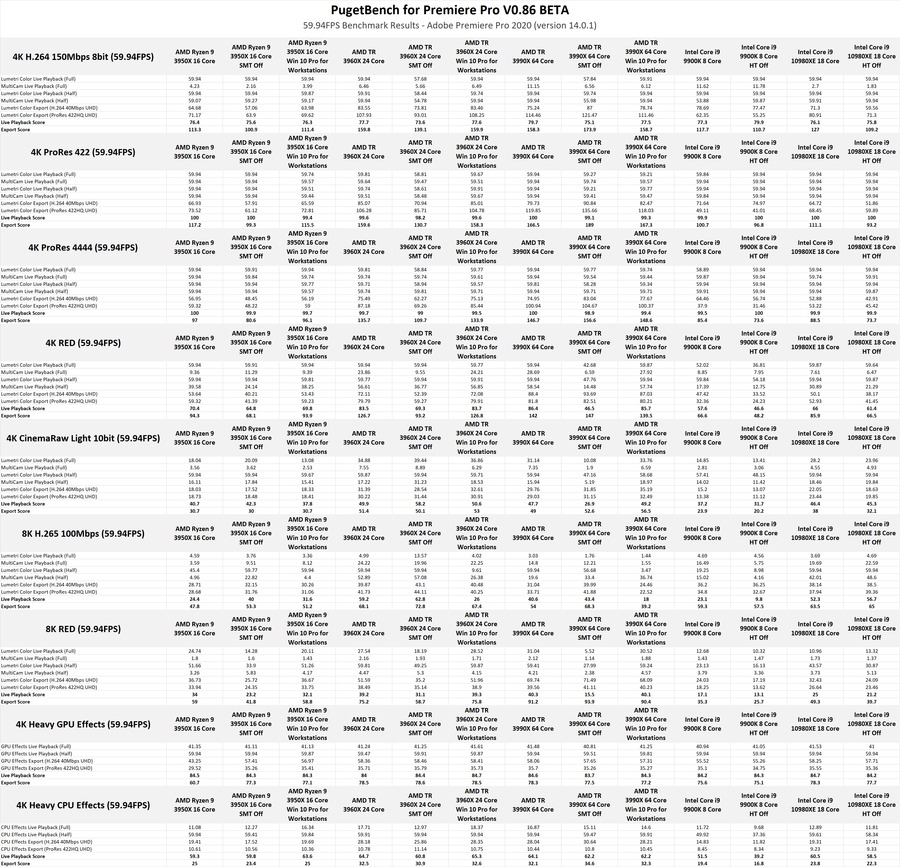 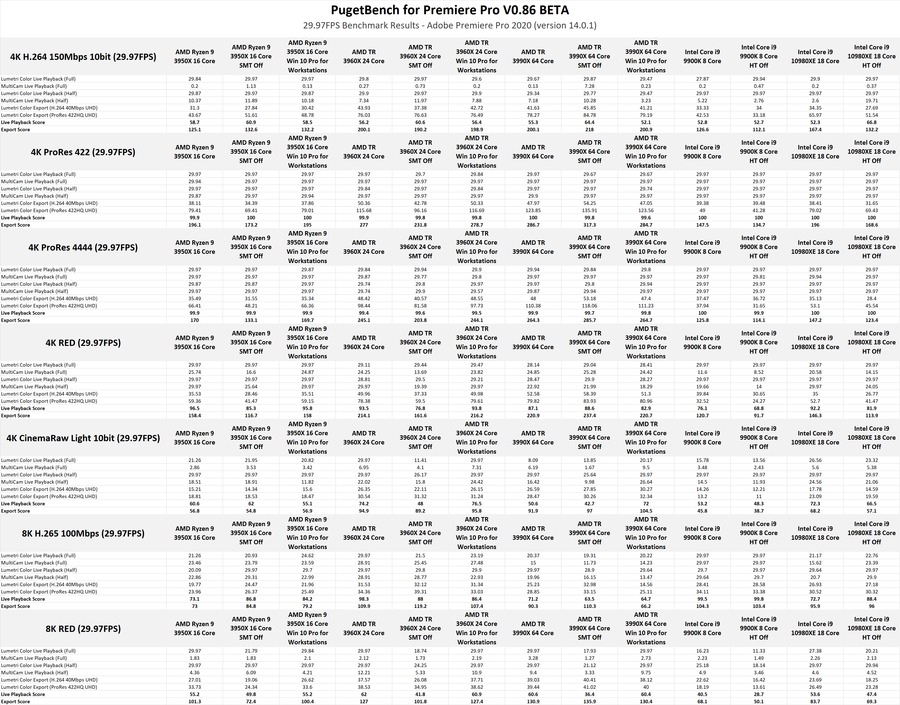 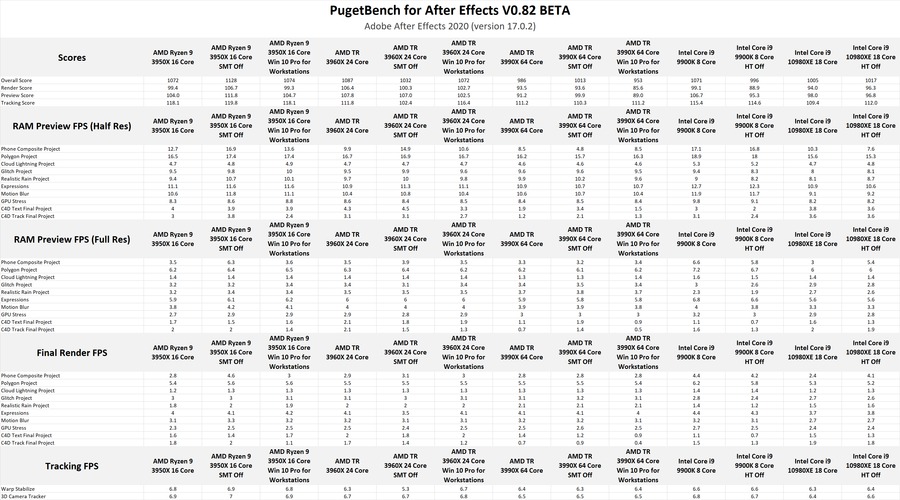 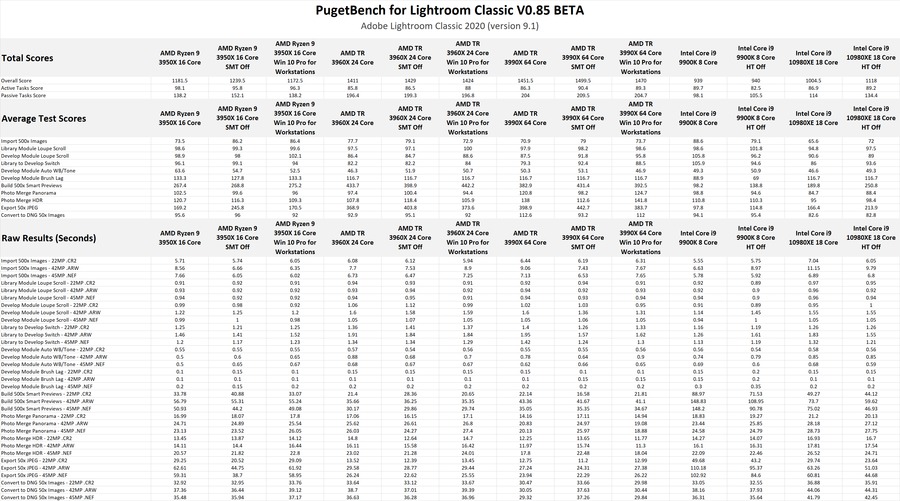 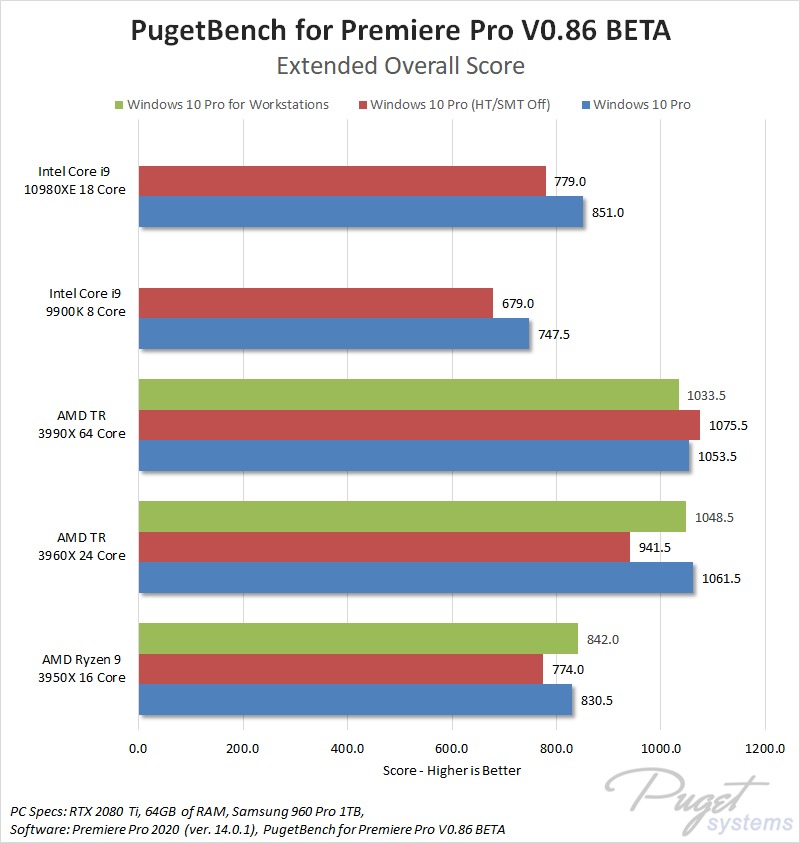 Out of the Adobe Creative Cloud applications we are testing, Premiere Pro benefits the most from higher core count CPUs which means that it is the most likely to be impacted by using Windows 10 Pro for Workstations. However, on the platforms we tested, there was no significant increase (or decrease) in performance versus the standard Windows 10 Pro version. All the results were within a few percent, which is well within the margin of error.

Disabling SMT (AMD) or HT (Intel), however, did result in some performance change – but not for the better. On most of the CPUs we tested, we saw roughly a 10% drop in performance with HT/SMT off. The 3990X was the odd man out since it technically saw a 2% increase in performance, but that is within the margin of error for real-world tests like this. In other words, disabling SMT/HT at best provides no benefit in Premiere Pro, and at worst can drop performance by ~10%. 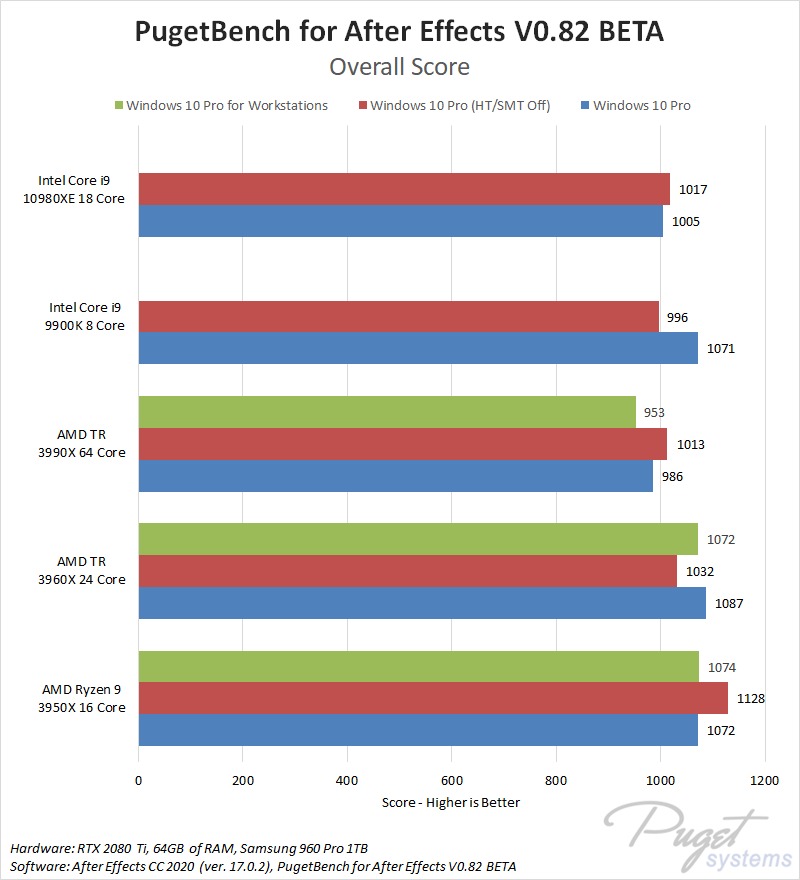 Moving on to After Effects, Windows 10 Pro for Workstations again provides no solid benefit over the normal version of Windows 10 Pro.

Disabling SMT/HT did provide a small ~5% boost in some cases, but in others, it resulted in a 7% drop in performance. 5-7% is starting to get beyond the margin of error for this benchmark, but considering the fact that it was inconstant in terms of helping or hurting, we would recommend keeping HT/SMT enabled for After Effects. 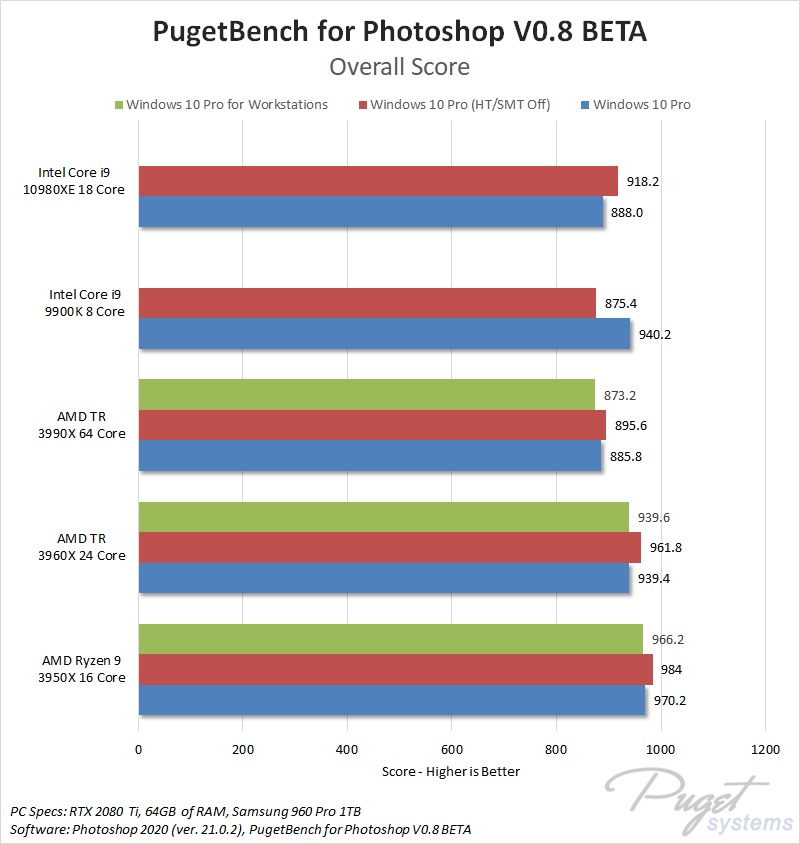 In Photoshop, we once again saw no benefit to using Windows 10 Pro for Workstations. Disabling SMT/HT also resulted in no significant change in performance with the exception of the Intel Core i9 9900K where we saw a 7% drop in performance. With the higher core count CPUs (including the Threadripper 3990X), the difference between SMT/HT being on or off was only a few percent which is nowhere near enough to be meaningful.

In this case, Windows 10 Pro for Workstation made effectively no difference so there is no concern about Lightroom Classic having issues with multiple processor groups in Windows 10 Pro. There were, of course, some small discrepancies in the results, but everything was well within the margin of error.

Disabling SMT/HT did result in some decent performance gains with a few of the CPUs (most notably the Core i9 10980XE), but the 3990X in particular only saw a small 3% gain in performance which is again within the margin of error. In fact, the benefits of disabling SMT/HT even on the passive tasks like exporting was much smaller than what we saw in previous versions of Lightroom Classic, so there is currently little reason to disable SMT/HT unless you export huge numbers of images. 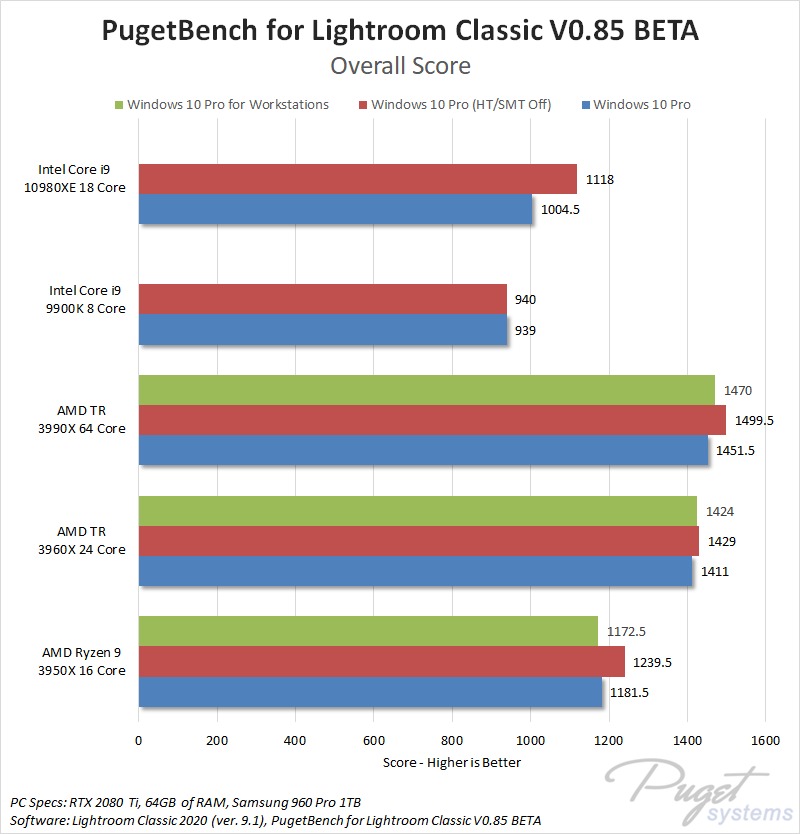 If you are using the AMD Threadripper 3990X (or any other CPU for that matter), we found no reason to upgrade to Windows 10 Pro for Workstations for the Adobe Creative Cloud applications we tested. Neither Premiere Pro, After Effects, Photoshop, or Lightroom Classic showed any performance gain, so you may as well save your money and stick with the normal version of Windows 10 Pro.

Disabling Simultaneous Multithreading (AMD) or Hyperthreading (Intel) also rarely improved performance, and often resulted in a small loss of performance. In some cases – like exporting in Lightroom Classic – it can improve performance, but that is not unique to the 3990X and many other CPUs (like the Core i9 10980XE) actually benefit to a more significant degree.

We don't want to discount Anandtech's findings since there very well may be some applications that benefit from using Windows 10 Pro for Workstations with the AMD Threadripper 3990X, and we know for a fact that there are some applications that benefit from disabling SMT/HT. But as far as Creative Cloud goes, we found no evidence that there is any reason to upgrade to Windows 10 Pro for Workstations.