Over the last three months, NVIDIA has been doing a rolling launch of their new GeForce RTX 30 Series video cards, culminating in the GeForce RTX 3060 Ti 8GB which just recently hit the market. While gaming is almost always a major focus during these launches, professional applications like DaVinci Resolve are becoming increasingly important for NVIDIA's GeForce line of cards.

DaVinci Resolve (especially the Studio edition) is known in the industry as having excellent GPU-acceleration support – greatly benefiting from a powerful video card. We are especially interested in how the RTX 3060 Ti in particular will perform as it is in previous articles, NVIDIA's RTX 30 series cards were able to out-pace everything from AMD. The RTX 3060 Ti, however, is the most affordable RTX 30 series card from NVIDIA to date, so it will be interesting to see how it stacks up against the latest GPUs from AMD. 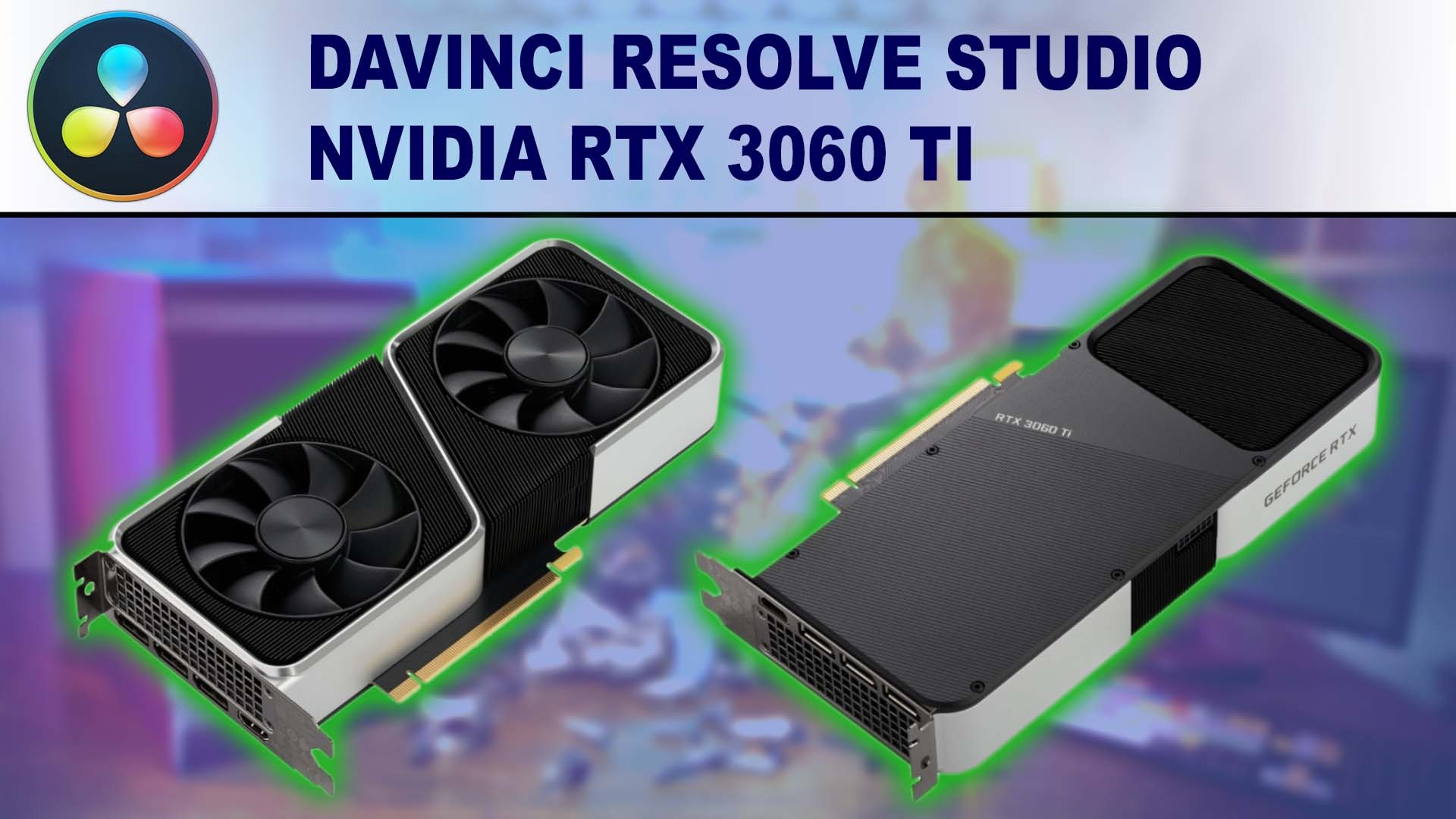 We will be using the "Extended" preset that includes both 4K, 8K media as well as specific GPU Effects and Fusion tests. Using 8K media with the RTX 3060 Ti (and other GPUs with only 8GB of VRAM) is actually not a good idea due to the "out of GPU memory" errors you would likely encounter, but our benchmark does not load the Resolve UI which means that the VRAM load is much lower; allowing GPUs with just 8GB of VRAM to successfully complete the 8K tests. 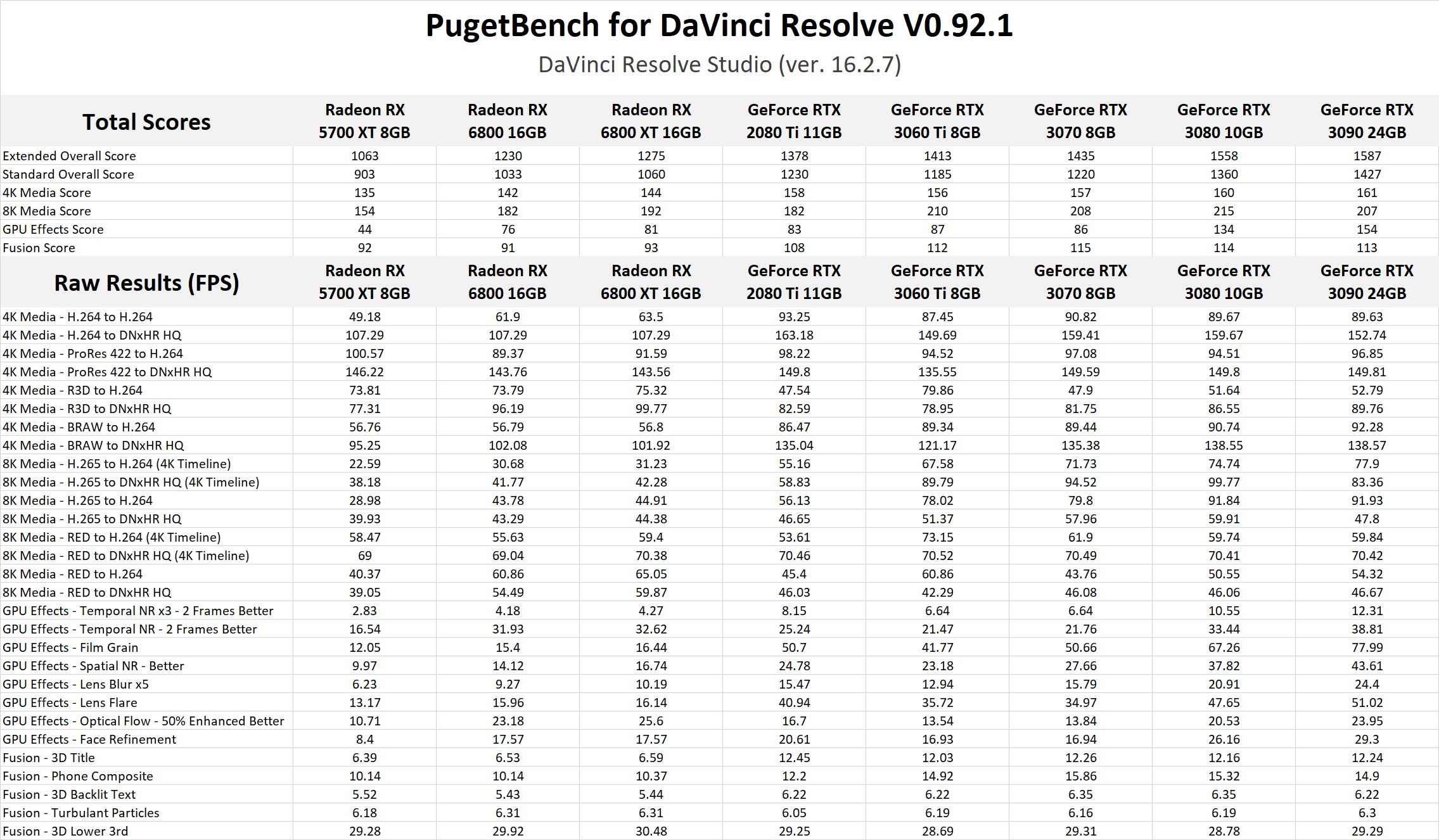 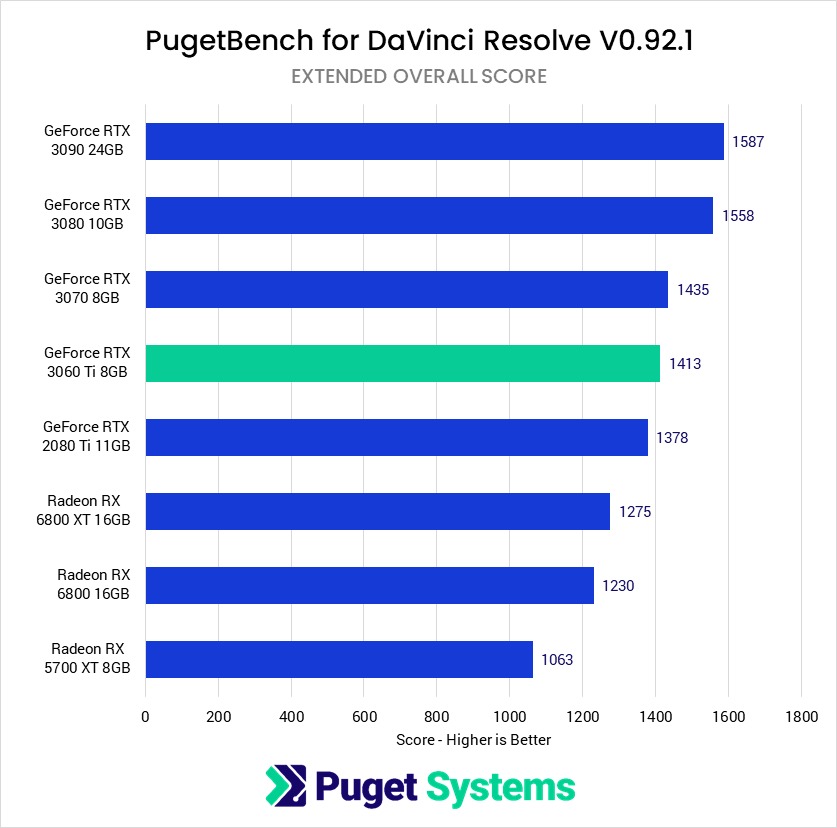 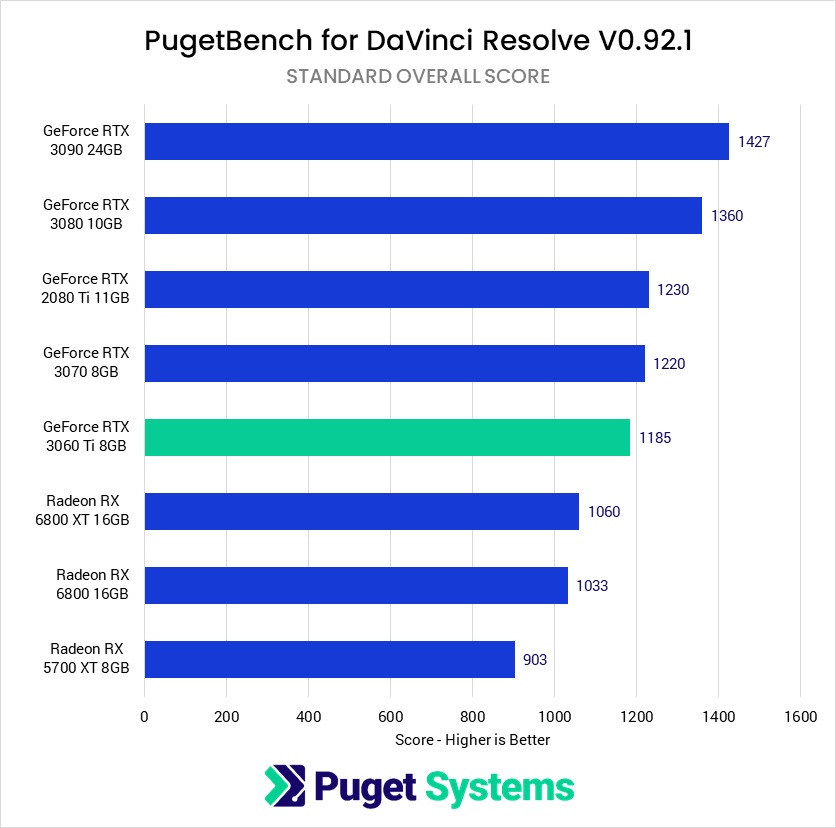 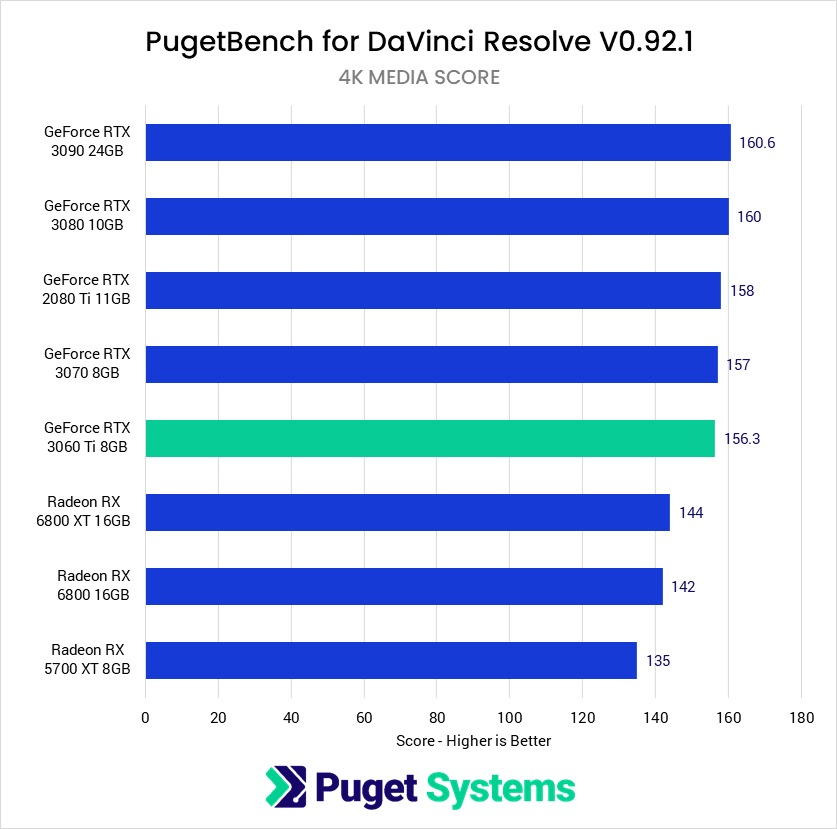 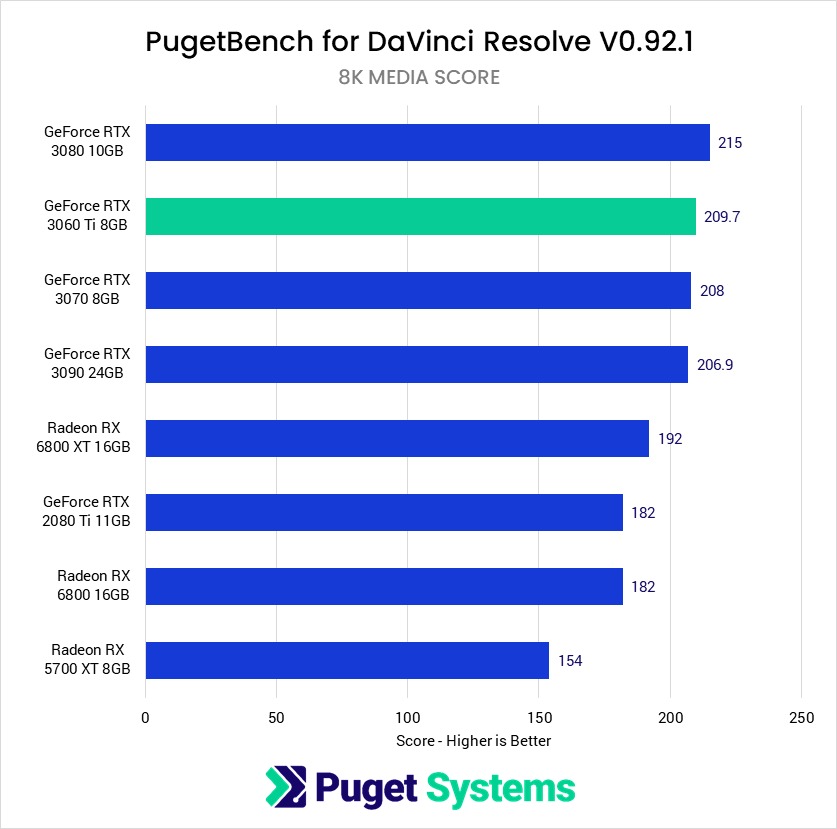 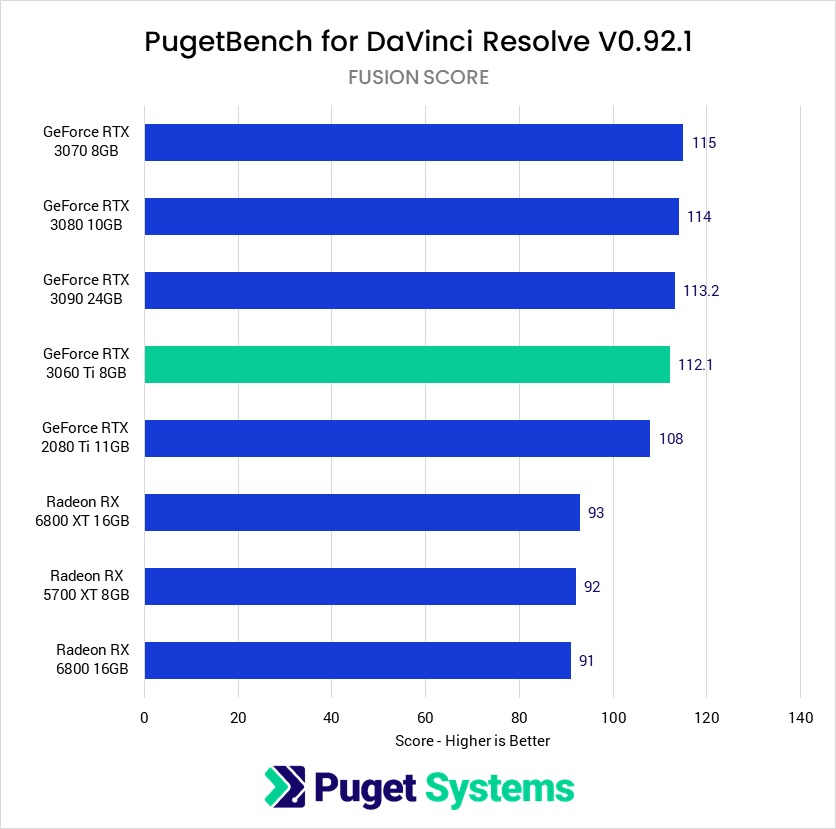 Looking at the Overall Extended Score, the new GeForce RTX 3060 Ti does very well; scoring within a few percent of the more expensive RTX 3070 and previous generation RTX 2080 Ti.

Compared to the AMD GPUs we tested, the RTX 3060 Ti is even more attractive. Not only does it beat the AMD Radeon 5700 XT by a large 30%, but it even manages to best the Radeon 6800 and 6800 XT by over 10%. The 6800 (XT) does have the advantage of having twice the VRAM, although that typically is only a consideration for those working with 6K+ timelines. And at that point, however, most users will likely want to use the RTX 3080 due to how much faster it is compared to the AMD GPUs. 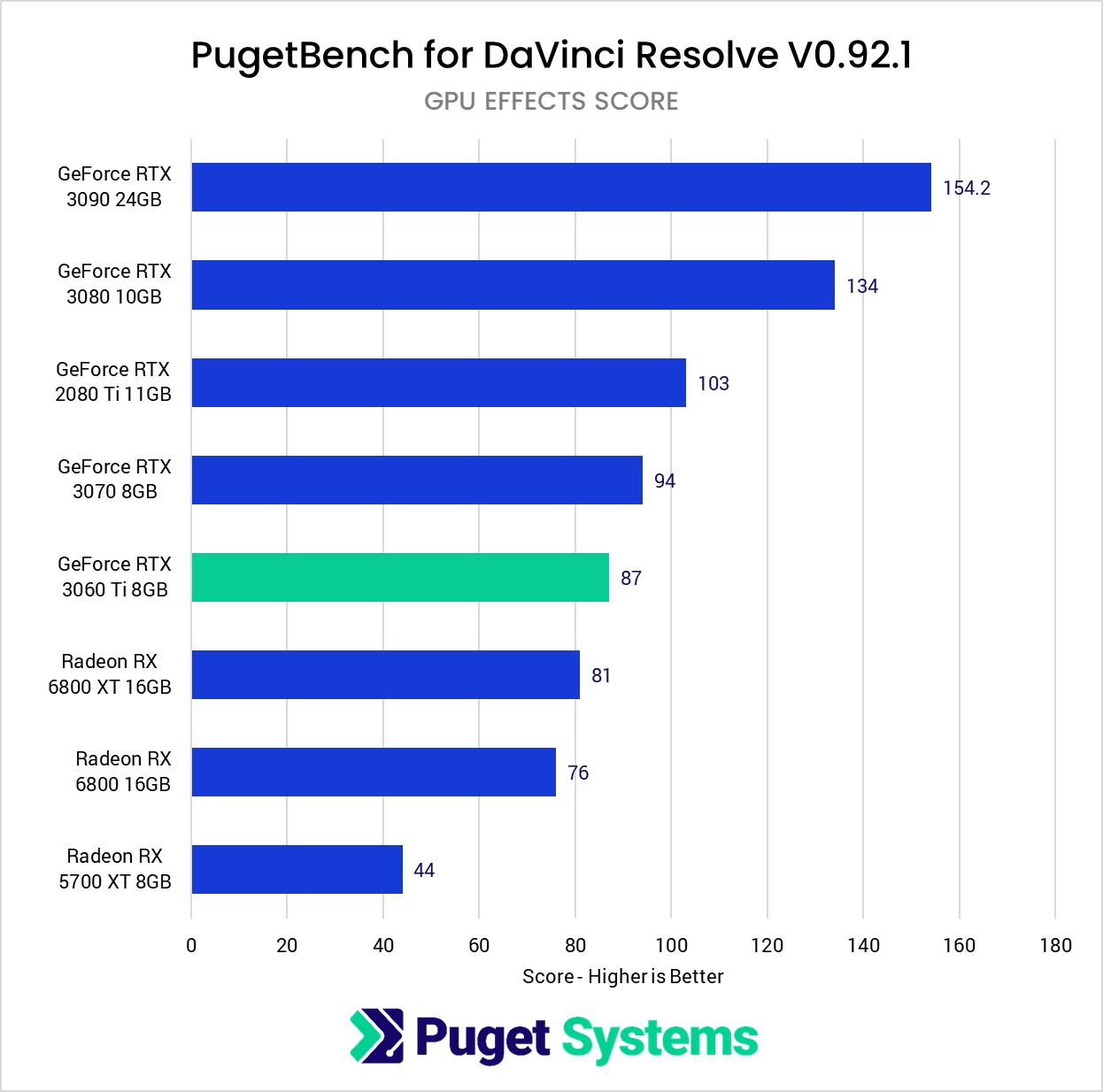 Compared to the higher-end NVIDIA GPUs, the RTX 3060 Ti is of course at the bottom of the stack (as it should be). However, the RTX 3070 is only about 8% faster which is about right considering it has a $100 higher MSRP. The RTX 3080 and 3090 are really where NVIDIA takes off from a performance standpoint, with those cards being 54% and 78% faster than the RTX 3060 Ti respectively.

If you need more performance, the RTX 3080 and 3090 are of course going to be significantly faster than the RTX 3060 Ti, but for just $399, the RTX 3060 Ti holds its own very well. Especially if you do not use many OpenFX or noise reduction, you may opt to use the RTX 3060 Ti over the more powerful (and expensive) cards in order to devote more of your budget to a more powerful CPU, more RAM, or faster storage.