Skip to content
Always look at the date when you read an article. Some of the content in this article is most likely out of date, as it was written on December 2, 2020. For newer information, see our more recent articles.

Recently, AMD launched their new Radeon RX 6800 and 6800 XT GPUs and while supply has been especially tight, we have finally managed to get our hands on a pair of cards courtesy of our friend Brian Stroh at BPS Customs. AMD has advertised very large performance gains with these cards, although gaming has been AMD's focus for the Radeon series of cards for the last few generations so we don't quite know what to expect in professional applications like DaVinci Resolve.

This testing is one that has been highly requested due to how much Resolve (especially the paid Studio version) can take advantage of the GPU. In some of our recent testing, we found that AMD lagged behind NVIDIA GPUs by quite a large margin with the Radeon RX 5700 XT not even being able to match the aging GeForce GTX 1080 Ti. It will be interesting to see if NVIDIA is able to maintain their sizable performance lead, or if the new Radeon RX 6800 and 6800 XT GPUs will allow AMD to match or beat NVIDIA in DaVinci Resolve. 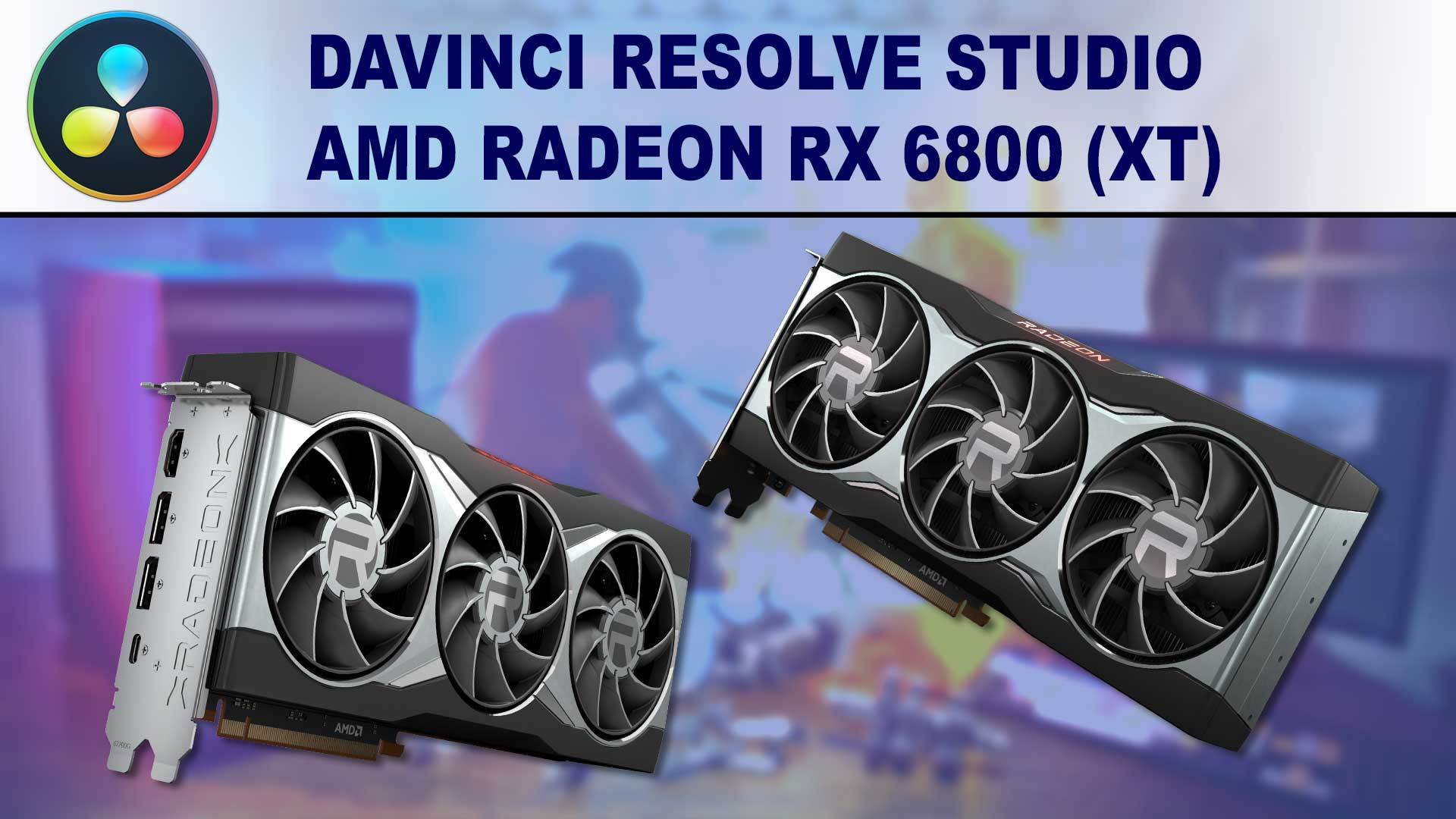 While specs rarely line up with real-world performance, it is nice to see AMD including 16GB of VRAM on the new 6800 cards since especially for DaVinci Resolve, the amount of VRAM you have can be critically important. Most of the GPUs you would use for Resolve these days have 8GB of VRAM which is plenty for most 4K timelines, but having 16GB of VRAM should allow for 6K timelines to be edited with little problem.

Unfortunately, even 16GB is not quite enough for 8K timelines. For that, we typically find that you want a GPU with at least 20GB of VRAM which largely limits you to the RTX 3090 24GB or workstation-class cards like Quadro and Radeon Pro. Still, the extra VRAM will be useful for those that tend to use multiple noise reduction nodes, a lot of OpenFX, and complicated grading node structures on 4K/6K timelines.

From a pricing standpoint, these cards are right in between the NVIDIA RTX 3070 and 3080 – although currently, supply is so poor that you will be lucky to find a card for anywhere near the MSRP. However, we typically use the MSRP as a baseline for price in order to rule out fluctuations due to different brands, sales, and scarcity. This means that from a performance perspective, we will be primarily looking to see if these cards are able to out-perform the RTX 3070 and whether or not they can beat the more expensive RTX 3080.

For the testing itself, we will be using the 0.92 version of our PugetBench for DaVinci Resolve benchmark. If you wish to run our benchmark yourself, you can download the benchmark and compare your results to thousands of user-submitted results in our PugetBench database.

We will be using the "Extended" preset that includes both 4K, 8K media as well as specific GPU Effects and Fusion tests. Using 8K media with many of the cards we are testing is actually not a good idea due to the "out of GPU memory" errors you would likely encounter, but our benchmark does not load the Resolve UI which means that the VRAM load is much lower; allowing GPUs with just 8GB of VRAM to successfully complete the 8K tests.

One thing to note is that due to the rolling GPU launches from NVIDIA and AMD, we will be re-using many of the results from our
DaVinci Resolve Studio – NVIDIA GeForce RTX 3070, 3080 & 3090 Performance article. There actually has not been a non-beta update to Resolve since that original article, but newer Windows updates may slightly affect performance with these newer cards. When the Radeon RX 6900 (XT) launches later this month – and we manage to get our hands on one – we plan to re-do all our GPU testing to ensure the results are as accurate as possible. 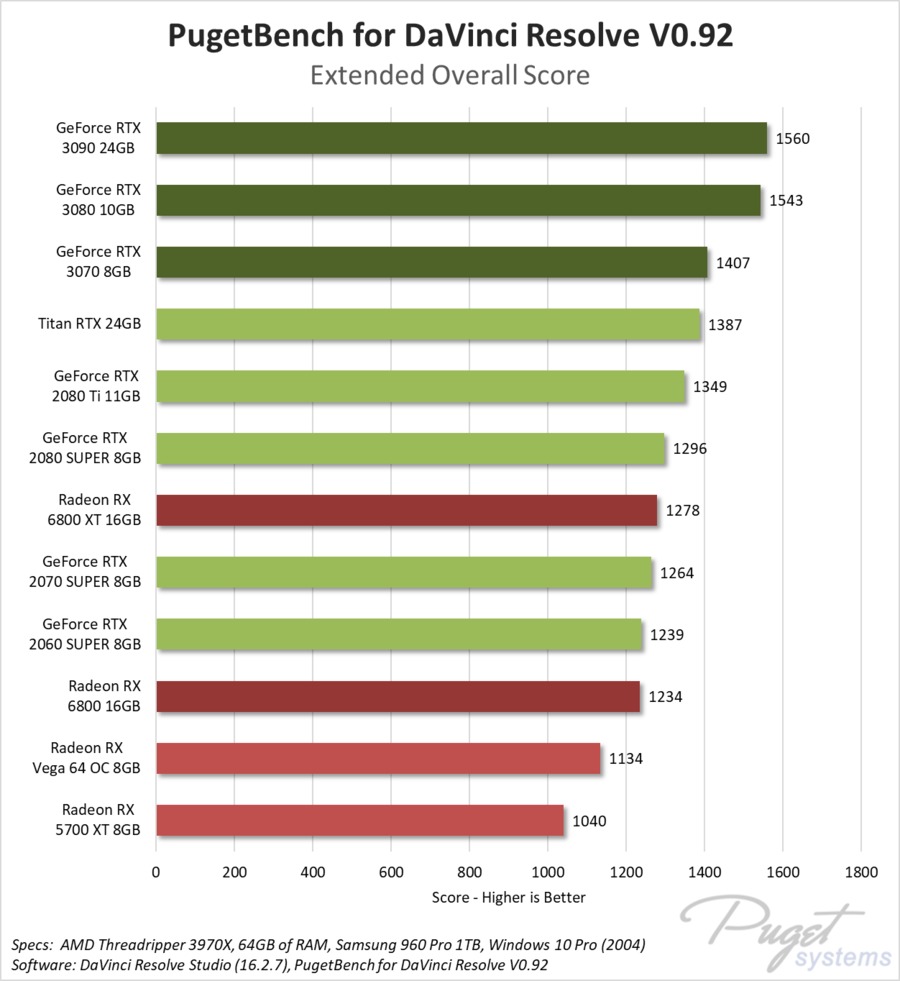 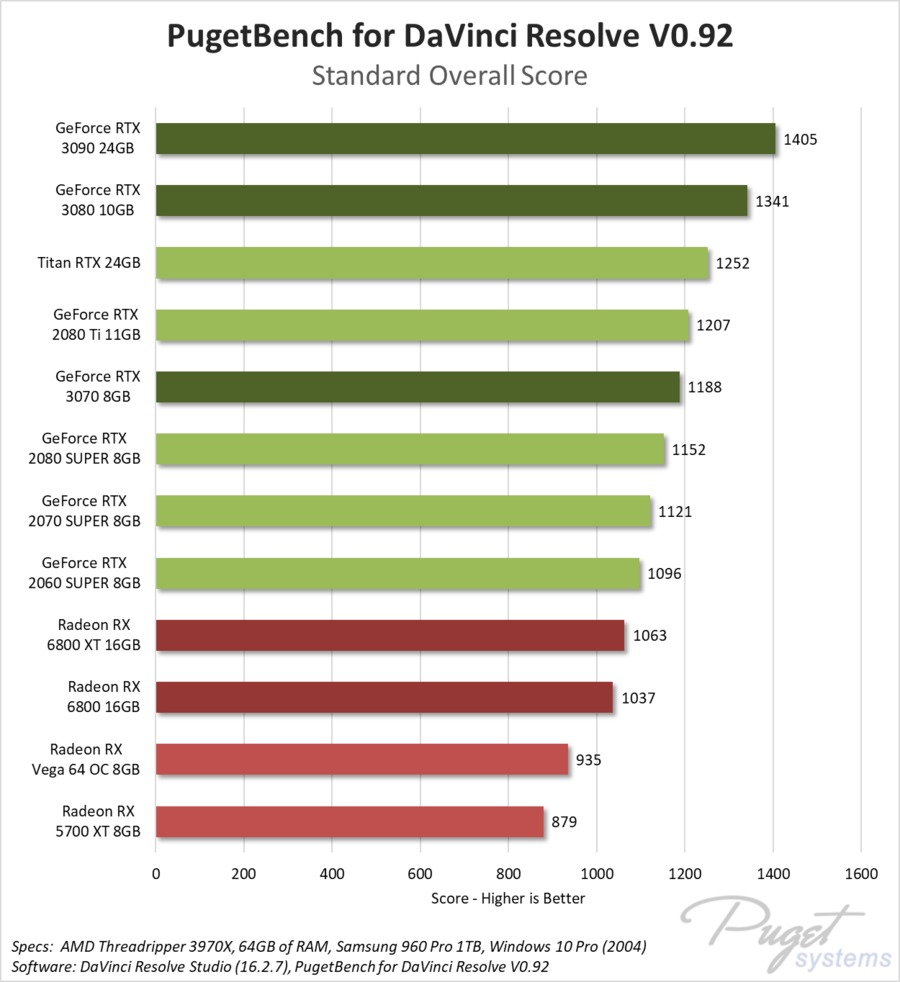 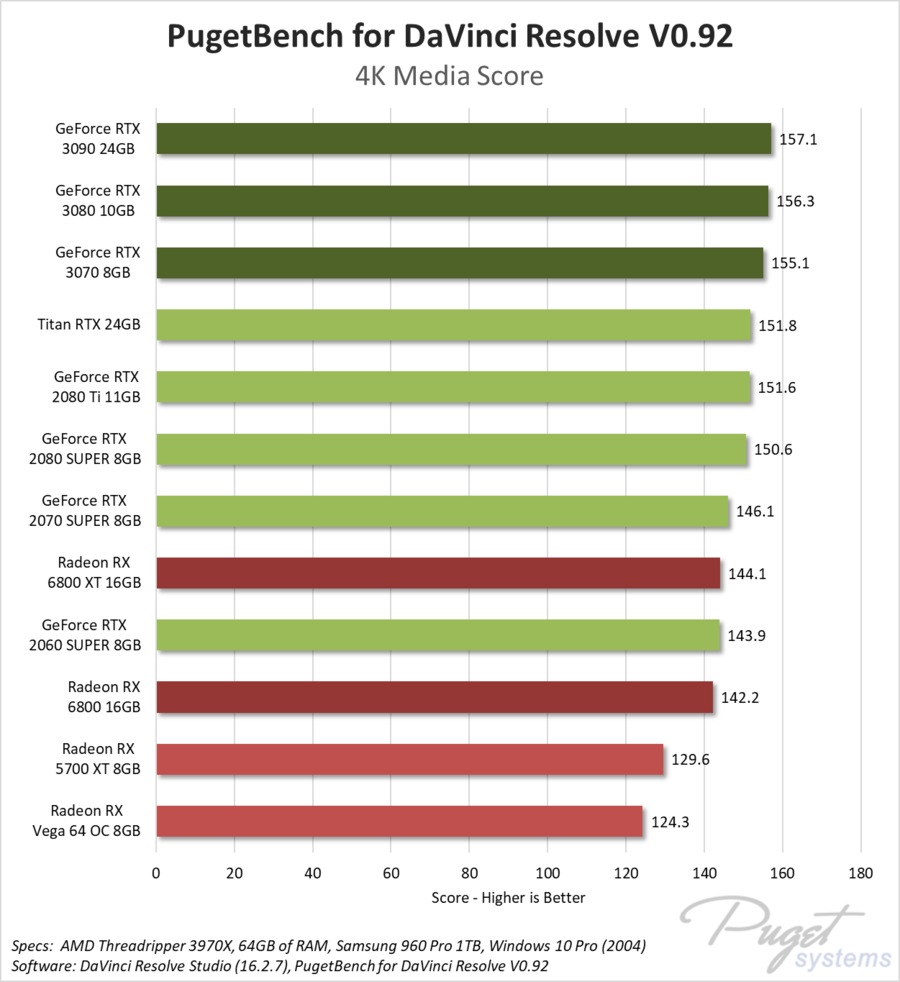 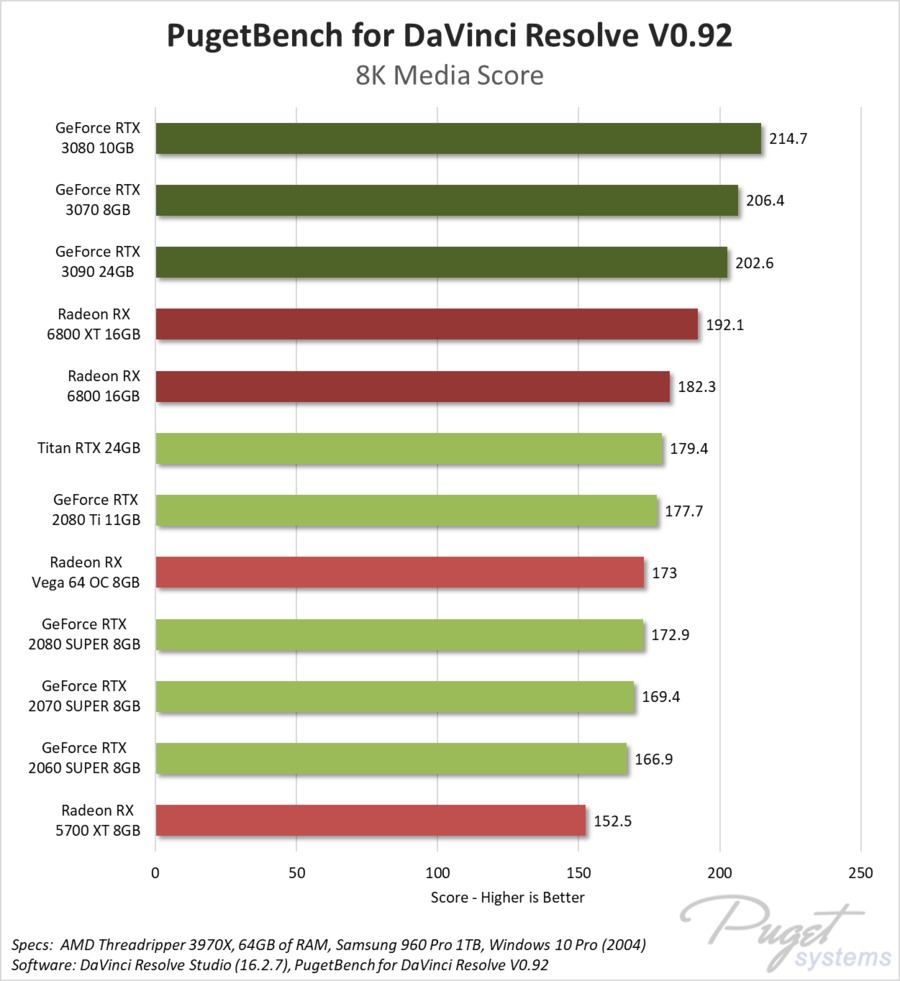 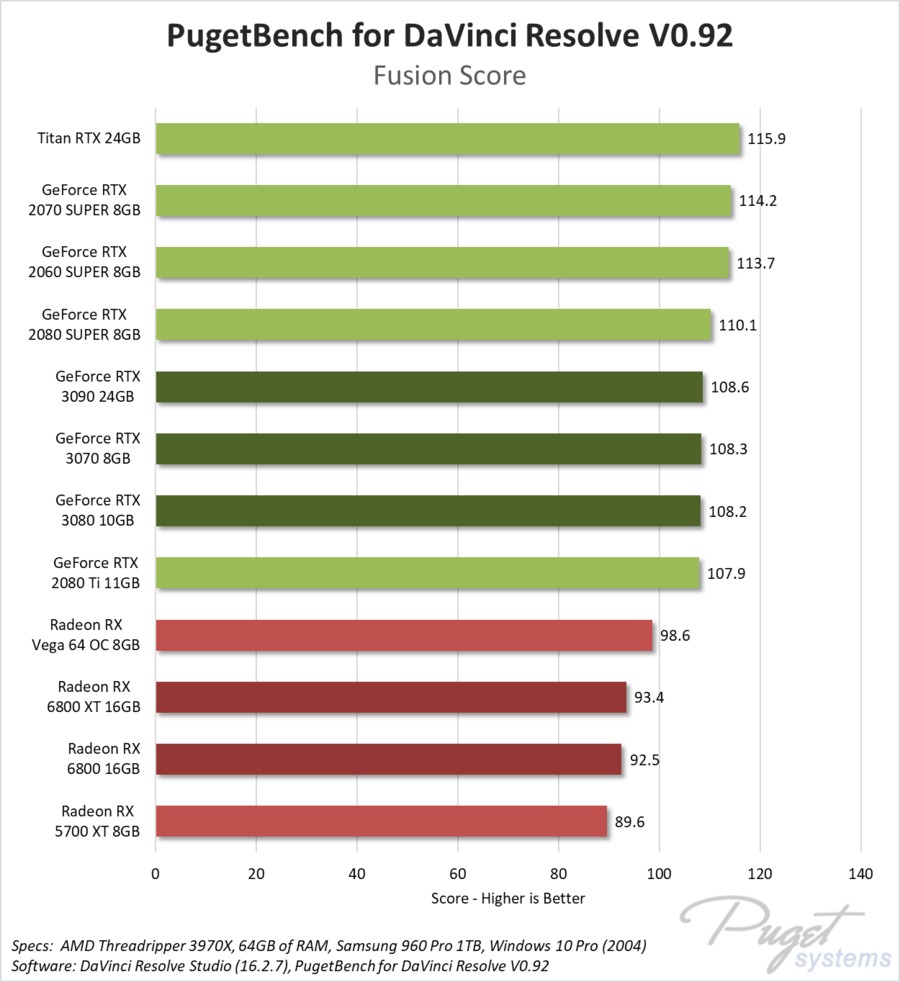 Compared to the older AMD Radeon cards, the 6800 is about 9% faster than the Vega 64 while the 6800 XT extends that performance gain to just under 13%. The 6800 and 6800 XT do have more VRAM than the Vega 64 and 5700 XT, but from a straight performance standpoint, this isn't quite as impressive as what we saw with NVIDIA's 3000 series over their previous generation 2000 series.

One odd thing we found is that the performance in the Fusion tab (the last chart above) with the new 6800 and 6800 XT is not all that great. The 6800 and 6800 XT are slightly faster than the older 5700 XT, but the Vega 64 is about 6% faster than the Radeon 6800 XT. It is also a bit strange that AMD in general gives less performance in Fusion than NVIDIA since most of our Fusion comps are largely CPU limited. There are some GPU effects in them, however, which apparently is enough for NVIDIA to take a solid lead even here. 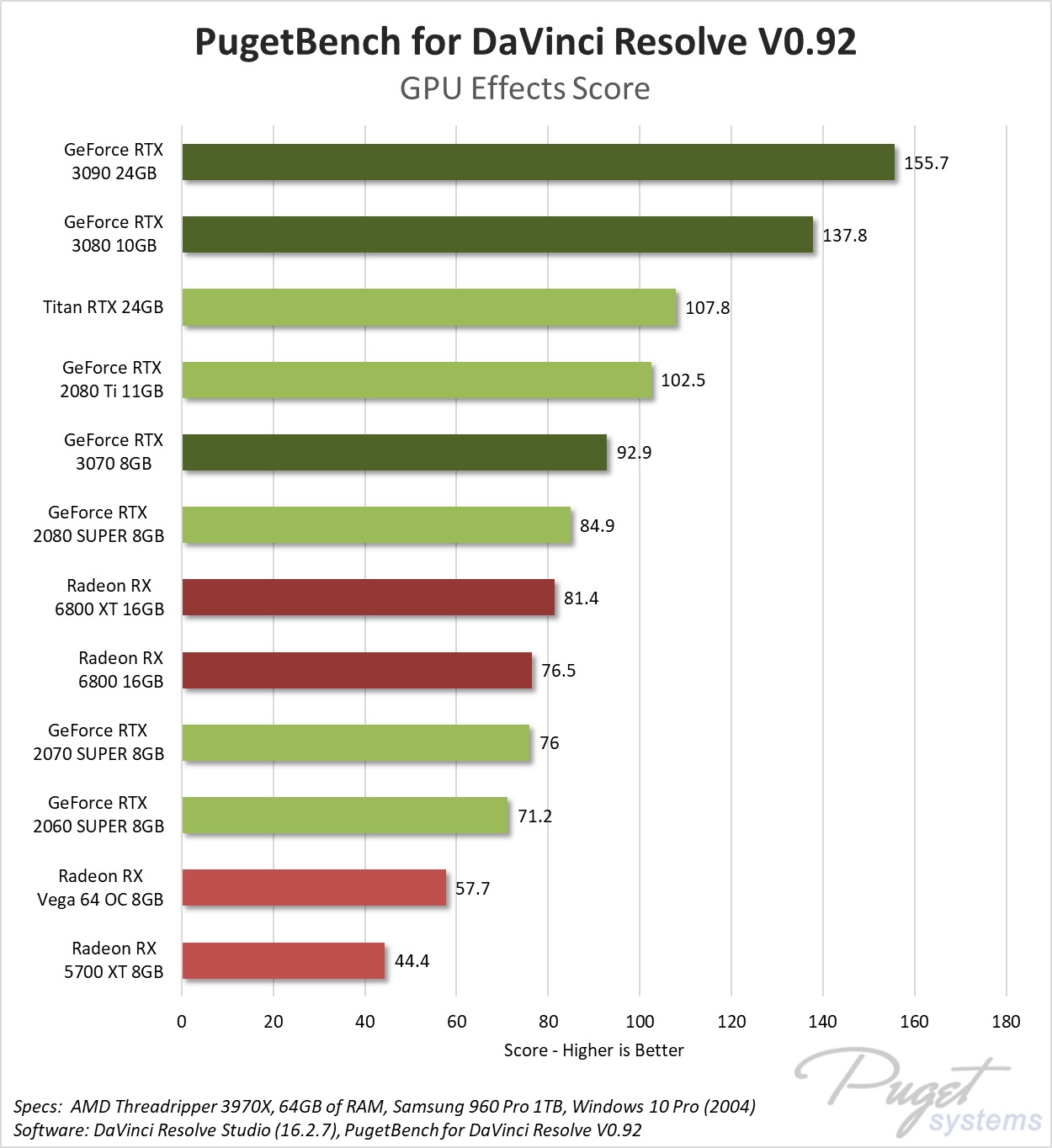 How well does the AMD Radeon RX 6800 and 6800 XT perform in DaVinci Resolve Studio?

Outside of a few cases like Fusion, the new AMD Radeon 6800 and 6800 XT are a good amount faster than the older Radeon 5700 XT and Vega 64. In especially GPU bound tasks like noise reduction and OpenFX, these new cards as much as 83%(!) faster than the 5700 XT. Unfortunately, while that is a massive performance gain, it isn't enough for them to catch up to the NVIDIA 3000 series cards. The RTX 3070 is less expensive than the 6800 and 6800 XT, yet outperforms them in our GPU Effects tests by a solid 14%. And if you can find an extra $50 to upgrade from the Radeon 6800 XT to the NVIDIA RTX 3080, you will see up to a 70% performance gain by going with NVIDIA.

The only time that these cards would make sense to use for DaVinci Resolve is if you wanted to be able to edit 6K timelines but cannot afford the (significantly) more powerful NVIDIA GeForce RTX 3090 24GB. Having 16GB of VRAM on a sub-$1000 card is very nice, although 6K editing has fallen out of style a bit in favor of 8K – and 16GB is not quite enough for most 8K timelines in Resolve. For that, you ideally want to have at least 20GB of VRAM which will limit you to the GeForce RTX 3090 24GB or a workstation-class card like Quadro or Radeon Pro.

Overall, AMD is heading in the right direction with the 6800 and 6800 XT, but just like we saw in many Adobe applications, even the impressive gains they are showing over the 5700 XT just isn't enough for them to catch up to NVIDIA.

As always, keep in mind that these results are strictly for DaVinci Resolve. If you have performance concerns for other applications in your workflow, we highly recommend checking out our Hardware Articles (you can filter by "Video Card") for the latest information on how a range of applications perform with the new AMD Radeon 6000 series GPUs, as well as with different CPUs and other hardware.