Skip to content
We have a new article available that includes the 14, 16, and 18 core Skylake-X CPUs alongside the 12 and 16 core Threadripper CPUs: Photoshop CC 2017.1.1 CPU Comparison: Skylake-X vs Threadripper

With all these new CPUs, it can be very tough to keep track of what CPU is the best for different applications so today we are going to look specifically at how AMD's Threadripper CPUs compare to the currently available Intel Skylake-X CPUs in Photoshop. One thing we do want to note is that Photoshop does not scale particularly well with a high number of CPU cores, so neither the Skylake-X or Threadripper CPUs are really the best choice for a pure Photoshop workstation. However, Photoshop is an extremely common application that is often used in a secondary role for video editing, rendering, 3D modeling, or a host of other workloads. Because of how widely used it is, we felt it was a good idea to do this testing in case there are any major performance issues with either of these product lines that might affect your choice of CPU.

To see how these new CPUs compare, we tested how long it took to complete a wide range of tasks in Photoshop including:

As we mentioned in the introduction, Photoshop typically performs best with a quad core, high frequency CPU so neither Skylake-X or Threadripper are likely to be the absolute best in terms of raw performance. To see just how much performance you might be losing compared to the top choice for a pure Photoshop workload, we also decided to include the Intel Core i7 7700K which is currently the fastest CPU available for Photoshop:

One thing we do want to note is that since Threadripper is in essence two Ryzen CPUs combined into a single device, it can have performance issues in some applications depending on how the software is coded. This is not an AMD-only issue, but is something we see with some regularity on the Intel side as well with dual Xeon workstations. You can read the details in AMD's blog about using Threadripper for gaming, but the short of it is that some applications simply don't work well with very high core counts – especially when those cores are spread across multiple "CPUs". To try to alleviate these issues, AMD has provided the ability to switch between two modes through the AMD Ryzen Master software:

Switching modes requires you to restart your computer so it isn't something you can do on the fly, but since Photoshop typically works best with fewer cores that run at a high frequency we wanted to see if Game Mode would provide a boost in performance. Since many users will not want to have to switch to Game Mode just to use Photoshop, we decided to publish results for both modes in the following sections. 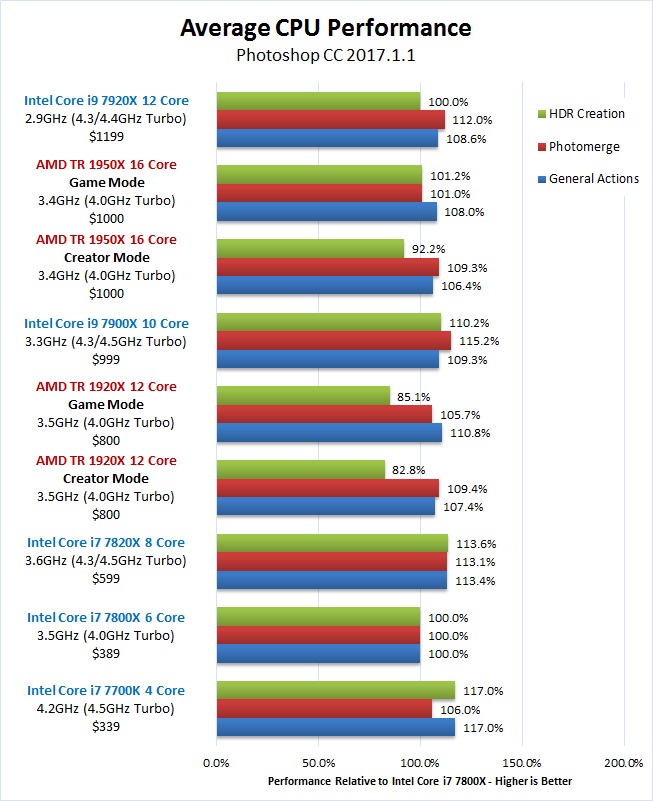 While Threadripper did fairly well in our Premiere Pro and After Effects testing, these results make it clear that Photoshop is not an ideal workload for the 1950X and 1920X CPUs. Between Game Mode and Creator Mode, which one was better depended entirely on the specific task being tested. General actions were just a few percent faster in Game Mode, but creating HDR images was as much as 9% faster. On the other hand, photomerge was 4-8% faster in Creator Mode.

Unfortunately, even cherry picking the results from both modes, Threadripper is definitely overall slower than Skylake-X for Photoshop. General actions (which is likely the primary concern for most users) was only slightly slower compare to Intel, but photomerge and especially HDR creation was quite a bit worse.

To be honest, most people who are considering Threadripper (or Skylake-X for that matter) are probably not heavy Photoshop users since these really are not the correct choice for Photoshop alone. However, there are a ton of people such as video editors that have to use Photoshop relatively often throughout the day, but performance in Photoshop is a secondary concern behind their primary applications. While the results in the chart above look pretty bad for Threadripper, it is worth keeping in mind that the blue bar for "General Actions" is really the most important result for this type of user and in that test Threadripper was only about 3-5% slower than the Intel CPUs.