Written on August 30, 2017 by Matt Bach
Share:
Always look at the date when you read a hardware article. Some of the content in this article is most likely out of date, as it was written on August 30, 2017. For newer information, see After Effects CC 2018 CPU Comparison: Intel 8th Gen vs X-series vs Ryzen vs Threadripper
Table of Contents

With all these new CPUs, it can be very tough to keep track of what CPU is the best for different applications so today we are going to look specifically at how AMD's Threadripper CPUs compare to the currently available Intel Skylake-X CPUs in After Effects. One thing we do want to note is that since After Effects CC 2015, high core count CPUs are not typically the best choice for an After Effects workstation. As Adobe has added more and more GPU acceleration, we have seen a shift in After Effects to the point that quad core CPUs with a high frequency actually out-perform higher core count CPUs. However, these quad core CPUs typically only support up to 64GB of RAM which often make them not ideal for high resolution or complex projects. Because of this duality, we are also going to be including the Intel Core i7 7700K quad core (Kaby Lake) CPU in our testing as it is currently gives the highest raw performance in After Effects.

As we noted in the last section, After Effects actually performs best with a quad core, high frequency CPU so neither Skylake-X or Threadripper are likely to be the absolute best in terms of raw performance. The higher RAM capacity of these two platforms is a major consideration, but to see how they compare against what is currently the fastest CPU for After Effects we also decided to include the Intel Core i7 7700K in our testing.

Before getting into our testing, we also want to point out that while our test platforms are using a single hard drive, that is not actually what we would typically recommend to our customers. A two (or more) drive configuration with the cache files on a secondary drive can make a big impact when scrubbing through complex timelines. However, since we will not be testing anything that would benefit from multiple drives in this article, we opted to use a single drive to cut down on the number of variables.

Before we start comparing Intel and AMD, the first thing we want to do is to ensure that we are testing Threadripper in the proper mode. Since Threadripper is in essence two Ryzen CPUs combined into a single device, it can have some performance issues depending on how the application is coded. This is not an AMD-only issue, but is something we see with some regularity on the Intel side as well with dual Xeon workstations.

You can read the details in AMD's blog about using Threadripper for gaming, but the short of it is that some applications simply don't work well with very high core counts - especially when those cores are spread across multiple "CPUs". To try to alleviate these issues, AMD has provided the ability to switch between two modes through the AMD Ryzen Master software:

Switching modes requires you to restart your computer so it isn't something you can do on the fly, but since After Effects typically works best with fewer, but faster, cores we wanted to test to see if Game Mode would provide a boost in performance. Luckily, this is easy enough to do by simply running our normal After Effects benchmark suite in both modes using the 1950X CPU: 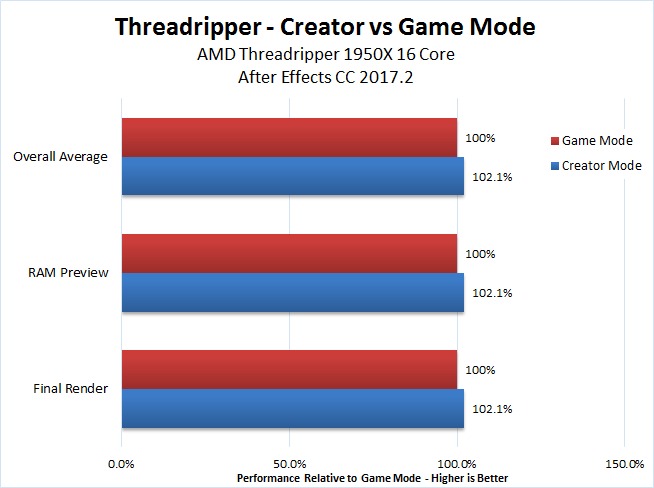 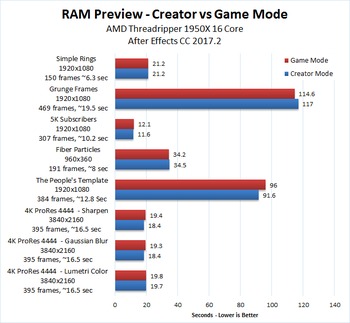 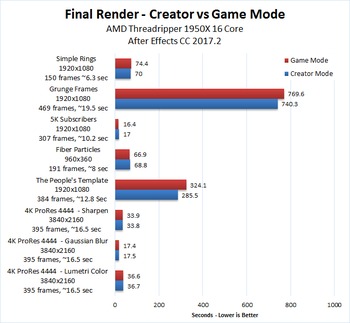 Feel free to examine the raw data from both our RAM Preview and Final Render testing by expanding the "Show Raw Results" link, but the data is pretty straight-forward: Creator Mode is the right choice for After Effects. The difference wasn't much, but on average we saw about a 2% performance gain with the Threadripper system in Creator Mode. Due to this, we are going to continue our testing without worrying about including "Game Mode" results.

Now that we know that Creator Mode is definitely the way to go with Threadripper, the first task in After Effects we want to look at is performance during RAM Preview. More than almost anything else, the faster you are able to play through your projects, the more productive you will be able to be. Due to this, high performance for RAM Preview is one of the most important parts of an After Effects workstation. 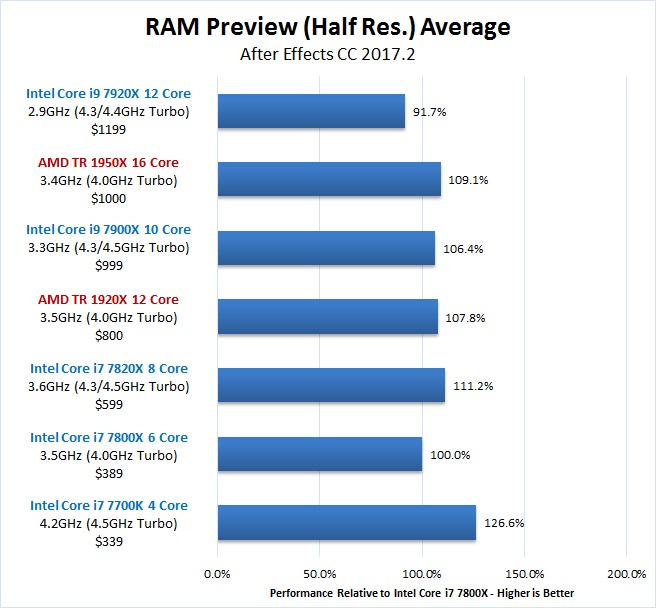 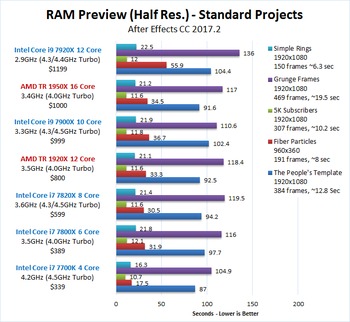 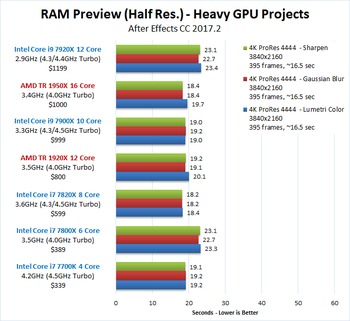 Since we are comparing 7 different CPUs across 8 different projects, it would take us a long time to go through the results one by one. Because of this, we decided to compile all the results into an overall average for each CPU compared to the Intel Core i7 7800X. As the lowest cost CPU in both the Skylake-X and Threadripper lines, it should make it a great point to compare the other CPUs against. If you wish to examine the raw results yourself, you can do so by clicking on the "Show Raw Results" link under the chart.

There are a number of interesting things to point out in our testing starting with the fact that none of the Intel Skylake-X or AMD Threadripper CPUs are able to touch the performance of the Intel Core i7 7700K. And because we know people will ask, our earlier testing also showed that AMD's Ryzen CPUs similarly cannot keep up with the Core i7 7700K in After Effects.

What surprised us was actually how well the Threadripper CPUs did considering the fact that After Effects typically values CPU frequency over raw core count. The Intel Core i7 7820X still beats both of the higher-priced Threadripper CPUs, but at the ~$1000 price point the Threadripper 1950X actually out-performed the Core i9 7900X by a few percent. 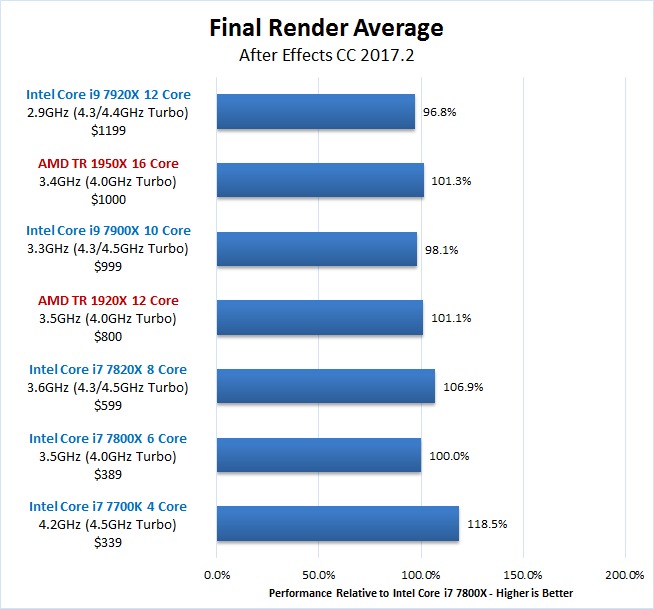 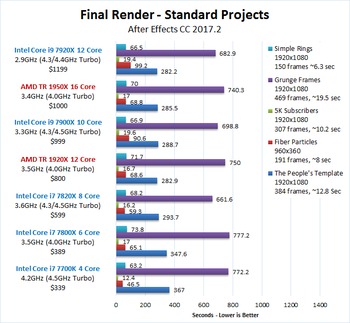 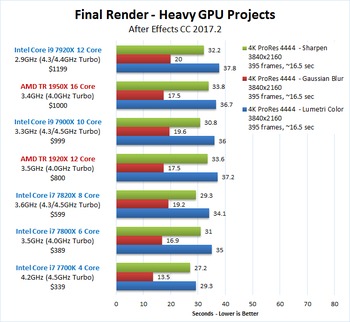 Just like in the previous section, since we are comparing 7 different CPUs across a range of projects, we decided to compile all the results into an overall average for each CPU compared to the Intel Core i7 7800X. If you have the time and will, feel free to examine the raw results yourself by clicking on the "Show Raw Results" link below the chart.

Interestingly, our base-line Core i7 7800X did better this time compared to the previous section which results in a slight shift in the relative performance percentages for the other CPUs. The end result is still largely unchanged however: for raw performance the Intel Core i7 7700K handily beats all the Intel Skylake-X and AMD Threadripper CPUs with the Core i7 7820X coming in at second place. Both Threadripper CPUs did relatively well and out-performed both the Intel Core i9 7900X and 7920X, but neither did as well as the lower cost Core i7 7820X.

Overall, we were pleasantly surprised at how well Threadripper held up. Neither Threadripper or Skylake-X can touch the raw performance of the Intel Core i7 7700K quad core CPU, but Threadripper in particular didn't see as much of a performance hit as we expected. 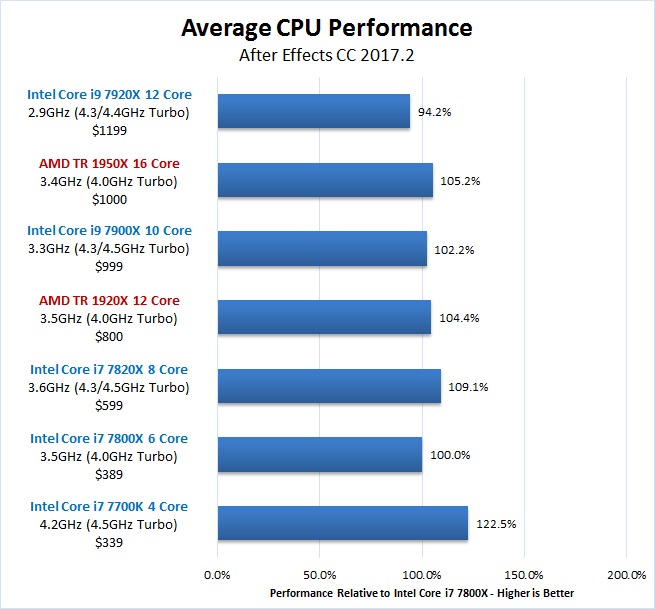 Averaging our results from both the RAM Preview and Final Render sections, we get a very clear idea about how Threadripper compares to Skylake-X. Overall, both the 12 and 16 core Threadripper CPUs compared very favorably to the higher-end Intel CPUs, beating the Core i9 7900X by 2-3% and the Core i9 7920X by ~10%. However, the lower cost Intel Core i7 7820X was actually faster than either Threadripper CPU by about 4-5% which keeps Threadripper from really being the ideal choice for a pure After Effects workstation.

So does that make Threadripper bad for After Effects? It really comes down to what you use your system for and what types of workloads are a priority for you. If you are building a machine purely for After Effects then Threadripper likely isn't the best option since both the Intel Core i7 7700K and Core i7 7820X are overall faster while also being a good amount cheaper. However, if your workflow includes applications where the high core count of Threadripper can be used effectively (such as 3D rendering or ray tracing) then Threadripper could very well be a very solid choice.