Written on July 6, 2017 by Matt Bach
Share:
Always look at the date when you read a hardware article. Some of the content in this article is most likely out of date, as it was written on July 6, 2017. For newer information, see our more recent articles.
Table of Contents

AMD's launch of Ryzen in March marked the first time in years that Intel was seriously challenged in the enthusiast CPU market. Now, with the Skylake-X and Kaby Lake-X CPUs officially launched, we get our first taste of Intel's response. It is really just a taste, however, since Intel has only released their 4, 6, 8, and 10 core CPUs so far. According to Intel's E3 press release, there will be a 12 core CPU available in August along with 14, 16, and 18 core CPUs in October. However, one thing to keep in mind is that After Effects is one of those applications where a higher core count tends to have little to no impact on performance, so these higher core count CPUs are actually unlikely to be any good for After Effects.

Because of this, we won't be able to look at the entire Skylake-X line-up today, but what we can do is see how the CPUs that are currently available compare to Intel's previous generation CPUs as well as AMD's Ryzen 7 CPUs.

Before getting into our testing, we also want to point out is that while our test platforms are using a single hard drive, that is not actually what we would typically recommend to our customers. A two (or more) drive configuration with the cache files on a secondary drive can make a big impact when scrubbing through complex timelines. However, since we will not be testing anything that would befit from multiple drives in this article, we opted to use a single drive simply to cut down on the number of variables.

In order to accurately benchmark the different CPUs, we tested the performance when rendering and playing 2D animation projects as well as working with 1080p and RED 4K video files (using both the newly GPU accelerated effects and performing motion tracking). This won't test absolutely everything you could possibly do in After Effects, but by testing a variety of projects from different sources we hope to find a number of trends that will help us decide what CPU is the best for AE.

Performance while playing back a sequence (RAM Preview) is one of the most important aspect of an After Effects workstation. The faster you can play through your project, the more productive you can be. 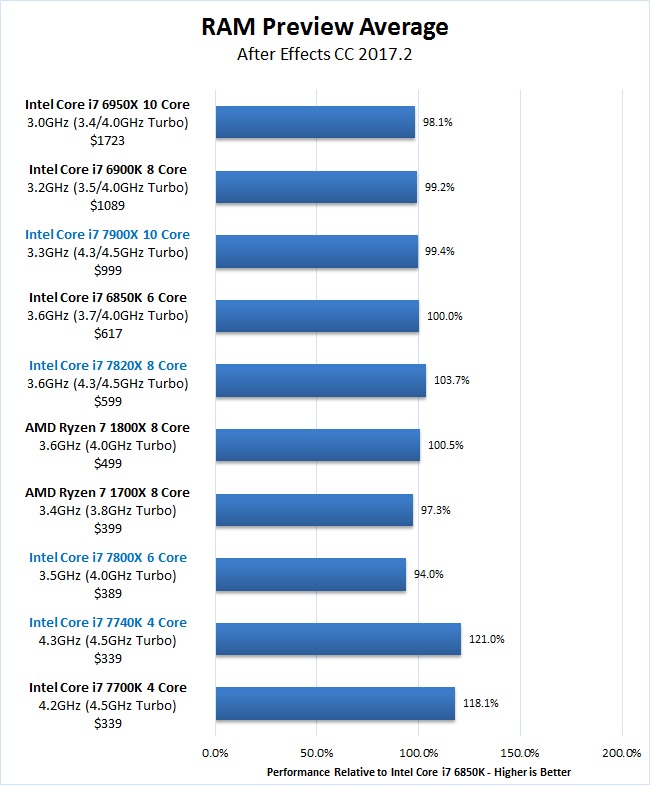 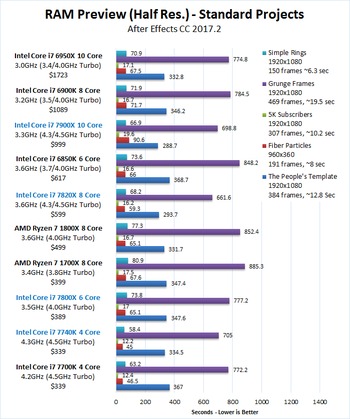 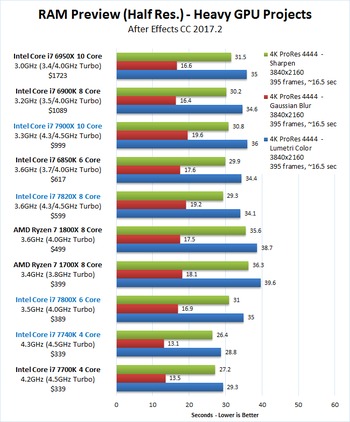 Since we are comparing 10 different CPUs across 8 different projects, it would take us a long time to go through the results one by one. Because of this, we decided to compile all the results into an overall average for each CPU compared to the Intel Core i7 6850K. Since After Effects does not scale particularly well with a high number of cores, this CPU has long been our primary recommendation for most After Effects workstations since it both performs well and supports a high amount of system RAM. If you wish to examine the raw results for each project yourself, you can do so by clicking on the "Show Raw Results" link under the chart.

In case you were wondering, the results above are completely accurate to our testing - we really didn't see much of difference in performance across the majority of the CPUs we tested. From a $499 CPU to a $1723, the performance between each CPU was within a few percent. The only CPU within this range that was noticeably better than the others was the Intel Core i7 7820X which was ~4% better than the others.

After Effects runs best with a CPU that operates at a high frequency, so the only processors that were truly better than the others were the i7 7700K and 7740X 4 core CPUs. Between these two, the new Core i7 7740X was about 3% faster due to it's slightly higher base clock frequency. 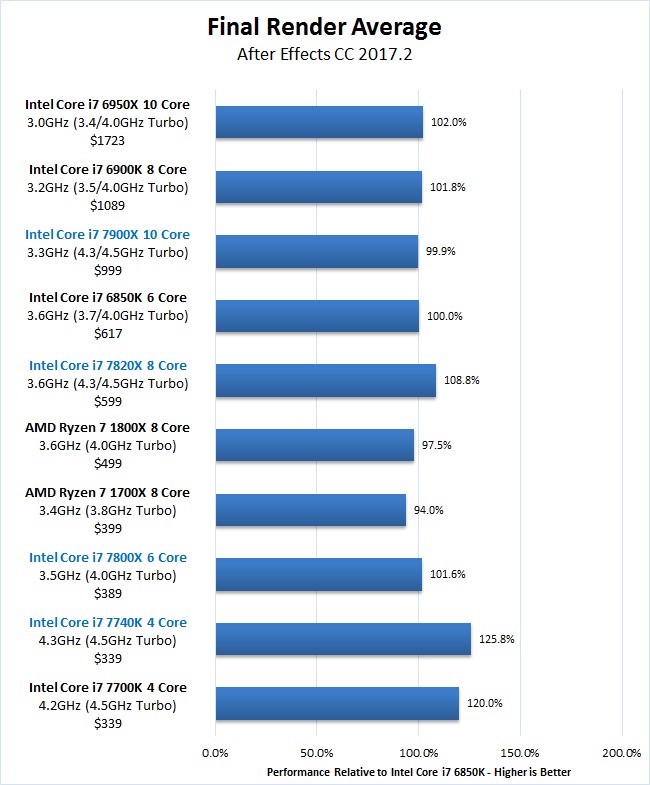 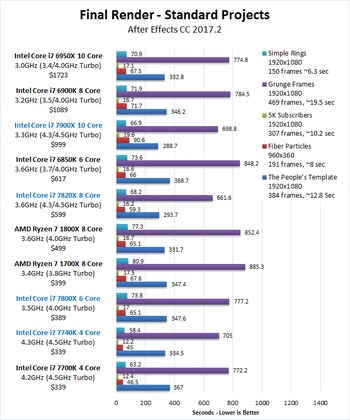 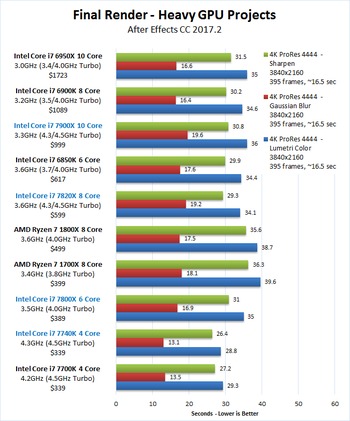 Just like in the previous section, since we are comparing 10 different CPUs across 8 different projects, we decided to compile all the results into an overall average for each CPU compared to the Intel Core i7 6850K. If you have the time and will, feel free to examine the raw results yourself by clicking on the "Show Raw Results" link below the chart.

After Effects is always an interesting application for us to test since it used to scale extremely well with a higher number of CPU cores. However, in After Effects 2015 Adobe began adding GPU acceleration and as a result multi core performance dropped heavily, throwing much of the "common wisdom" for choosing a CPU completely out the window. 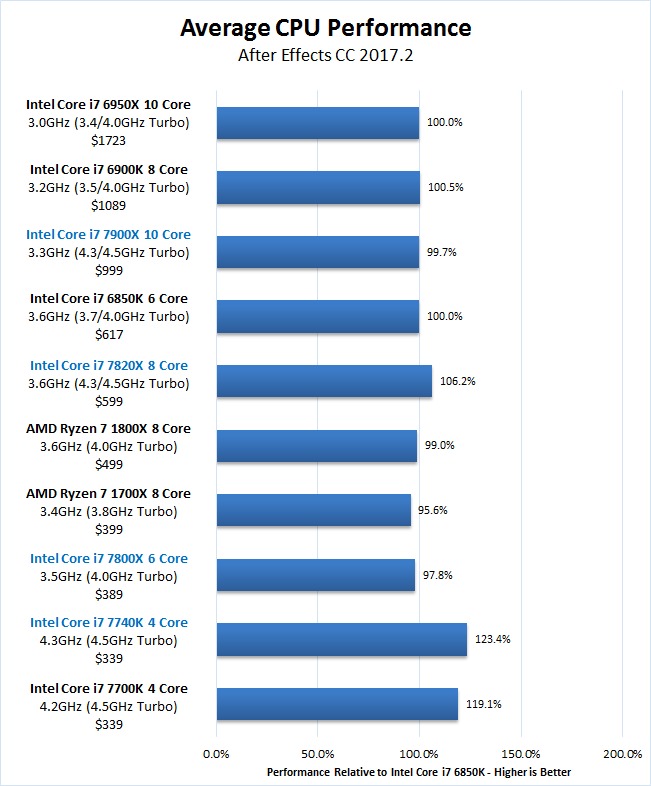 Overall, it is remarkable how similar the majority of the CPUs we tested performed. The only truly great CPUs were the Intel Core i7 7700K and the new i7 7740X. The problem with both of these CPUs is that they only support a maximum of 64GB of RAM. This may be fine for relatively simple projects in After Effects, but the longer and more complex the project the more noticeable this limitation will be. The reason is that as you play through a sequence in After Effects, each individual frame is cached into RAM. If you jump around your sequence, any frame that is still cached will not have to be re-rendered saving you a huge amount of time. However, if you run out of RAM After Effects starts overwriting old frames which will force your system to have to re-render any frames that got deleted. In other words, having more RAM means you can store a higher number of frames in the RAM cache.

It is worth noting that the AMD Ryzen 7 CPUs also have this 64GB RAM limit. So while the Ryzen 7 1800X performed well compared to the 6-10 core Intel CPUs, there is really little reason to use it over the much faster and more affordable Intel Core i7 7700K or i7 7740X.

For professional After Effects users that need more than 64GB of RAM, the Intel Core i7 7820X is the primary CPU we would recommend. The i7 7800X is also fairly decent (especially for it's price) but a 8% performance gain for a $210 higher price is actually pretty good for After Effects. In addition, since the i7 7800X does not support Turbo Boost 3.0, the i7 7820X should be significantly faster for motion tracking, warp stabilize, or when you simply need to throw something together real quick in Photoshop.

The bottom line is that, just like in previous generations, the majority of the new Intel CPUs are not all that useful for After Effects. The Core i7 7820X is the only CPU that supports more than 64GB and is faster than the previous generation - and even then only by about 6%. If you are already using a previous generation Broadwell-E CPU there is likely not much of a reason to upgrade. On the other hand, if you are already in the market for a new workstation this is a 6% gain in performance gain over the Core i7 6850K for a few dollars less, so there really isn't much of a reason to not use the newer Intel Core i7 7820X.