Skip to content
Always look at the date when you read an article. Some of the content in this article is most likely out of date, as it was written on July 11, 2017. For newer information, see our more recent articles.

Alongside the new Skylake-X (Core i7-78xx & i9-79xx) and Kaby Lake-X (Core i7-77xx & i5-76xx) CPUs, Intel has also released the accompanying X299 Chipset. These days, new chipsets are rarely very exciting as more and more functionality is moved onto the CPU, but we wanted to cover what differences there are between X299 and the previous generation X99 chipset.

If you are curious how the new Skylake-X and Kaby Lake-X CPUs themselves perform, we currently have articles looking at how they compare to the Intel Broadwell-E and Skylake CPUs as well as the AMD Ryzen 7 CPUs for the following applications:

Starting from the top, X299 supports the new LGA-2066 socket necessary for the new CPUs, but it has not seen much of a change from a RAM compatibility perspective. Since the memory controller was moved onto the CPU a number of years ago, things like the supported RAM frequency depends on the capabilities of the CPU rather than the chipst. Because of this, the X299 chipset still supports the same 4 channels of memory with one DIMM per channel resulting in most X299 motherboards allowing either four or eight sticks of DDR4 RAM.

The first major addition to the X299 chipset is the support for Intel RST for PCI-E storage devices rather than just SATA storage devices. X299 also adds support for Optane technology which has great potential, but has not really taken off quite yet.

Moving on to connectivity, X299 supports the same total number of USB ports although the number of USB 3.0 has gone up from 6 to 10. Oddly, the number of SATA 6Gb/s ports has been reduced from 10 to 8. It is extremely rare for more than even 4 SATA drives to be used in a system without a 3rd party RAID controller, however, so this reduction really isn't that big of a deal for the vast majority of users.

The biggest change in X299 from a feature standpoint is the number and speed of PCI-E lanes available through the chipset. Where X99 only had 8 PCI-E 2.0 lanes, X299 now has 24 PCI-E 3.0 lanes. This is a massive increase and should make it much easier to use devices like M.2 storage drives or even Thunderbolt without having to worry about how you are going to divide up a small number of PCI-E lanes.

Overall, most of the changes in X299 are quite minor. The extra USB 3.0 ports are nice and while the support for Intel Optane has the potential to be significant, the current implementation is fairly underwhelming for most users.

The most exciting change is the inclusion of 24 PCI-E 3.0 lanes – up from just 8 PCI-E 2.0 lanes on X99. This should greatly help the transition from the somewhat dated SATA 6Gb/s technology to the much higher performance M.2 specification. Since each high speed M.2 drive requires four dedicated PCI-E 3.0 lanes, the inclusion of 24 PCI-E 3.0 lanes is terrific. In fact, a number of ATX X299 boards already on the market include support for up to three full speed M.2 drives. Given that current M.2 drives can run at up to 3.5GB/s for only a ~20% price increase over a high quality SATA drive, we see this as the largest single benefit to X299 for end users.

However, as is often the case, the main reason to use X299 is simply to be able to use the new Skylake-X and Kaby Lake-X CPUs. These CPUs are not supported by the previous generation X99 chipset, so if you want to use these newer CPUs, X299 is really your only option. 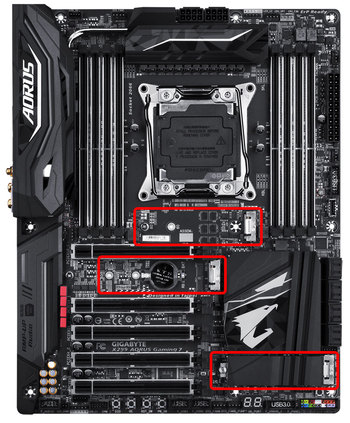