Skip to content
Always look at the date when you read an article. Some of the content in this article is most likely out of date, as it was written on July 12, 2017. For newer information, see our more recent articles.

It is very common for video games to be used in hardware reviews, but the development platform for those games are typically completely ignored. Today, we are going to help alleviate this problem by looking at a how a number of CPUs perform in the Unreal Editor for Unreal Engine 4.16. This includes the latest CPUs from both Intel (Skylake-X and Kaby Lake-X) and AMD (Ryzen 7) in addition to CPUs from the slightly older Intel Broadwell-E and Skylake lines.

One thing to note is that although the Skylake-X and Kaby Lake-X CPUs are officially launched, Intel has only released the 4, 6, 8, and 10 core models so far. According to Intel's E3 press release, there will be a 12 core model available in August along with 14, 16, and 18 core models in October. Unreal Engine has a number of tasks that are very well threaded (where a higher core count improves performance) including building lighting and compiling, so this is really only a taste of how the Skylake-X line as a whole might perform in Unreal Editor.

There are a wide variety of tasks we could test in Unreal to see how all these CPUs perform, but in this article we will specifically be looking at the following tasks:

If you would like to skip over our test setup and analysis of the individual benchmarks, feel free to jump right to the conclusion section.

Since the new processors from Intel include two different CPU architectures, our testing platform is less straightforward than normal. Most of the new CPUs support DDR4-2666 RAM, although the Intel Core i7 7740X (Kaby Lake-X) CPU only supports four sticks of RAM rather than eight. In addition, the Intel Core i7 7800X (Skylake-X) only supports DDR4-2400 RAM for some odd reason. We typically test with the highest officially supported RAM configuration for each CPU, so components used in our X299 test platform requires an entire table just for itself:

In order to accurately benchmark the different CPUs, we tested the performance across two sample projects that are freely available for download. Our testing will obviously not be 100% accurate for any project you might create, but these two projects are different enough to help us identify a number of performance trends. 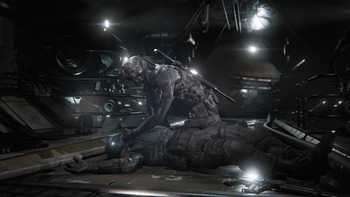 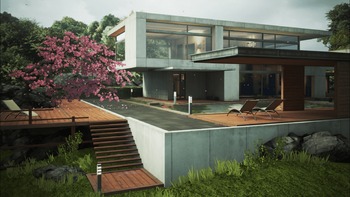 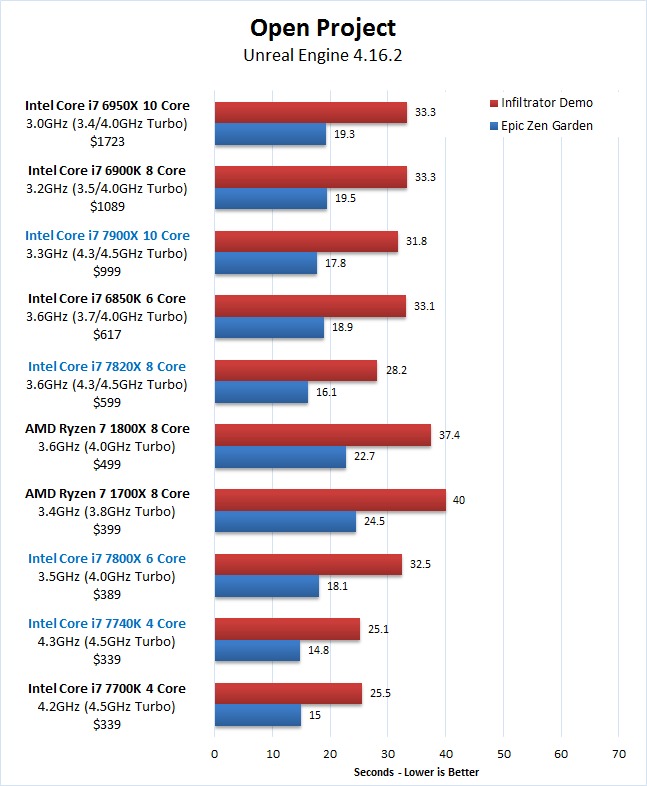 The time it takes to open a project may not be a terribly exciting way to start our testing, but it is something you do multiple times a day, every single day. Performance here may not be your number one priority, but the less time you spend waiting on your system, the more productive you will be.

The key thing to note in this test is that the lower core count CPUs (which tend to have higher single-threaded performance) are clearly the best for this task. The new Intel Core i7 7740K (Kaby Lake-X) is the fastest overall, although the Intel Core i7 7700K (Kaby Lake) was only a tiny 1.5% slower. The Intel Core i7 7820X was the next fastest, followed by the rest of the Intel CPUs which all performed roughly on par.

The lowest performing were the AMD Ryzen 7 CPUs, although that is somewhat to be expected as those CPUs do not have particular great single-threaded performance. 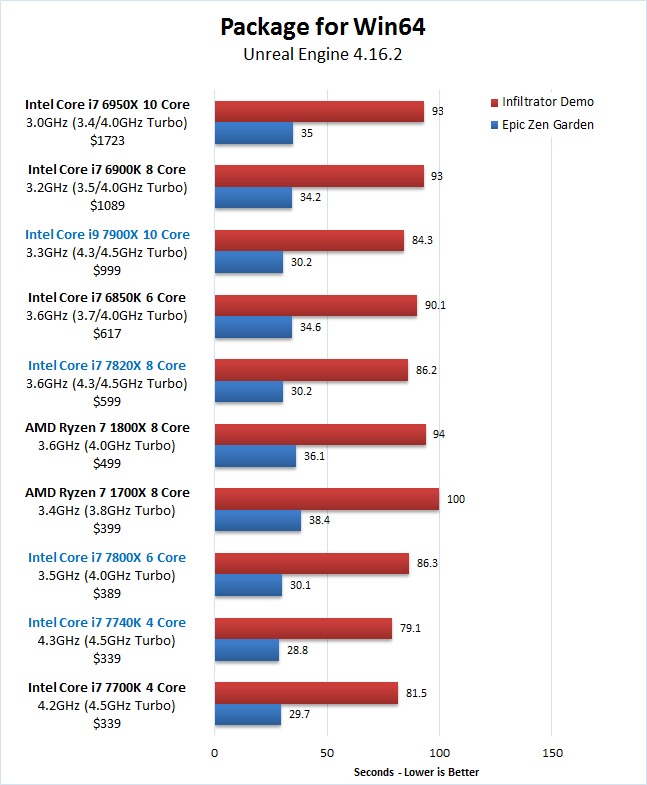 Packaging (whether it be for Win64, Win32, Android, etc.) is a task that some readers may expect to finish faster on a higher core count CPU, but our results indicate that more cores is definitely not better.

Just like in the previous section, the lower core count CPUs (which have higher single-threaded performance) are again the best for this task. The higher core count CPUs did better than they did when opening a project, but none of them are able to quite match the quad Core CPUs. The new Intel Core i7 7800X and 7820X along with the Core i9 7900X were the closest as they trailed the Core i7 7740X by only 4-8%. 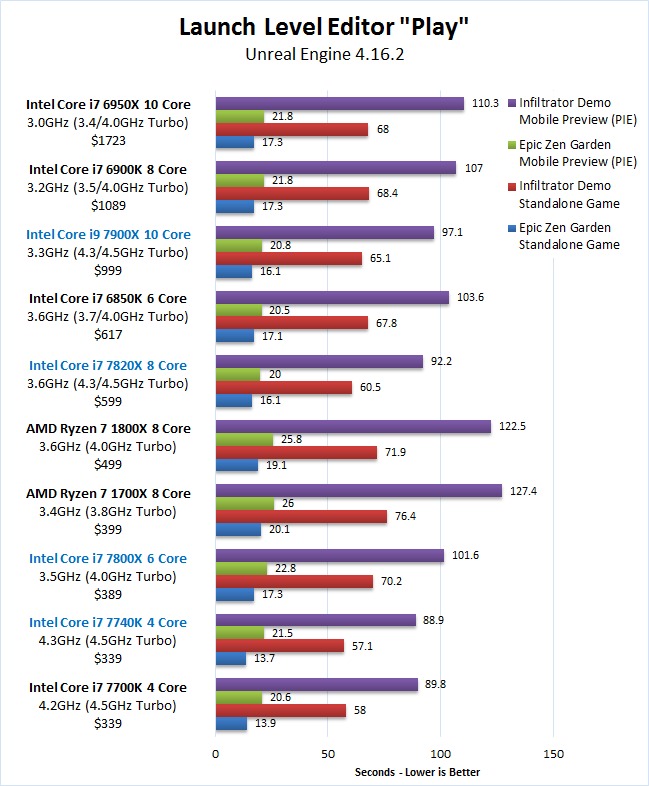 The first time you launch the level editor "Play" can take a significant amount of time depending on your project and the mode you are using. For this test, we decided to measure the time it took to get into your game with both the "Mobile Preview (PIE)" and "Standalone Game" modes.

It may be feeling a bit repetitive at this point, but we again saw the best performance with the quad core Intel CPUs. The new Skylake-X CPUs were not far behind, however, with the Core i7 7820X only performing about 4% slower on average. Across the other CPUs we tested, the results are pretty closely in line with what we saw in the previous two sections. 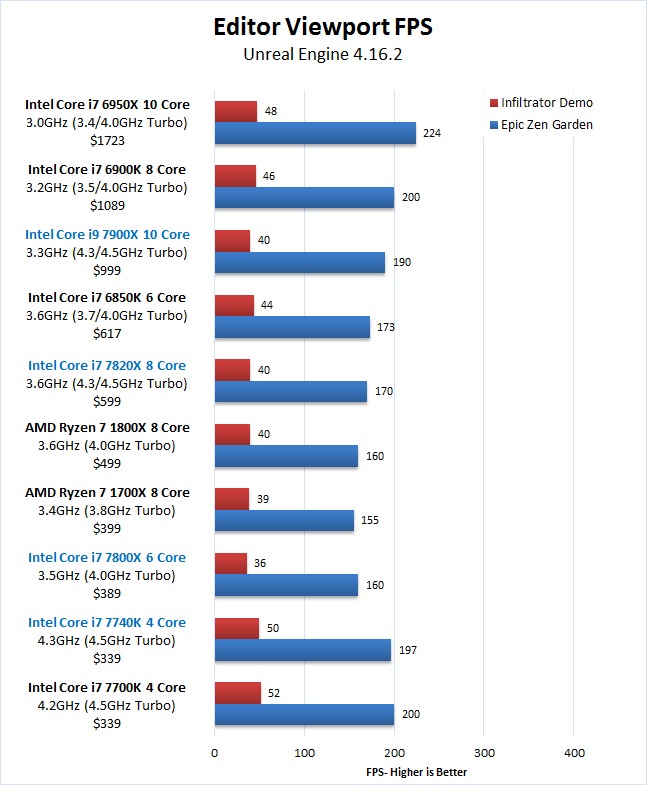 We considered doing a whole host of FPS testing, but given that the FPS is heavily dependent on the GPU we decided to stick with just the FPS in the editor viewport rather than measuring the FPS in a variety of situations. Note that unlike every other test, this time a higher result is better since we are looking at frames per second rather than the time it takes to complete a task.

Overall, the results for the new Skylake-X CPUs are a bit odd. For the 6-10 Core across both the Broadwell-E and Skylake-X product lines, we saw a clear increase in FPS as we got into the higher core counts. What is weird is that the new Skylake-X gave much lower FPS than the Broadwell-E CPUs. Since the Skylake-X CPUs have out-performed the old Broadwell-E CPUs on virtually every test we have run over the last few months, this looks more like a new architecture bug than anything else. If maximum viewport FPS is a major concern for you, we would recommend holding off on purchasing a Skylake-X CPU for now but we expect these results to rise dramatically in the coming months. 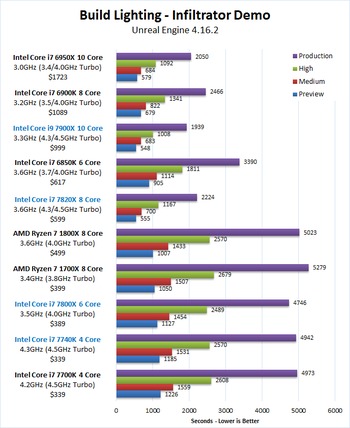 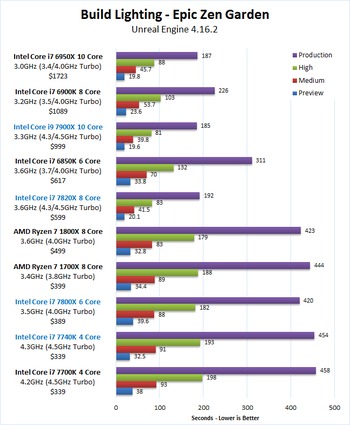 Building lighting can take a significant amount of time and since we wanted to see if there was a difference in relative performance depending on the quality setting this one test took longer than all our other tests combines. The short answer is that while the lower quality modes are certainly faster to complete, the relative performance difference between each CPU did not change to a significant degree.

Building lighting is one of the few tasks in Unreal Editor than can take great advantage of having a high number of CPU cores, but oddly this seems to only apply to the Intel CPUs. While the AMD Ryzen CPUs have 8 cores, they were only about to beat the Core i7 7740X quad core CPU by around 5% on average and were roughly half the performance of Intel's 8 core CPUs.

The new Core i7 7800X 6 core was a bit disappointing as it is slower than the old Core i7 6850K 6 core – although given its much lower price the price-to-performance ratio isn't terribly bad. However, the real outstanding CPU in this test is the new Core i7 7820X. Even though it is fairly middle of the road in terms of price, it gave terrific performance and was only slightly slower than the much more expensive Core i9 7900X. 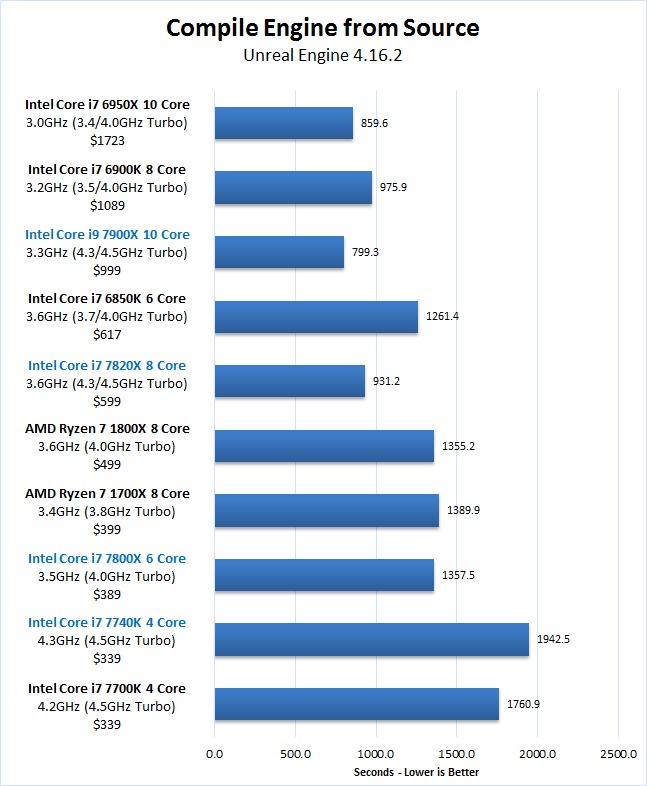 Like build lighting, compiling is a task that can benefit greatly from having a high number of CPU cores. There are a few oddities in our results – such as the i7 7740X being slower than the i7 7700K – but overall the results line up pretty much as you might expect. If you spend a decent amount of time compiling, the new Core i7 7820X and Core i9 7900X are terrific and likely the go-to option.

Unreal Editor is an interesting application to test since it has a combination of lightly threaded tasks and heavily threaded ones. Because of this, which CPU is best for you is going to depend on the tasks you typically find yourself waiting on. 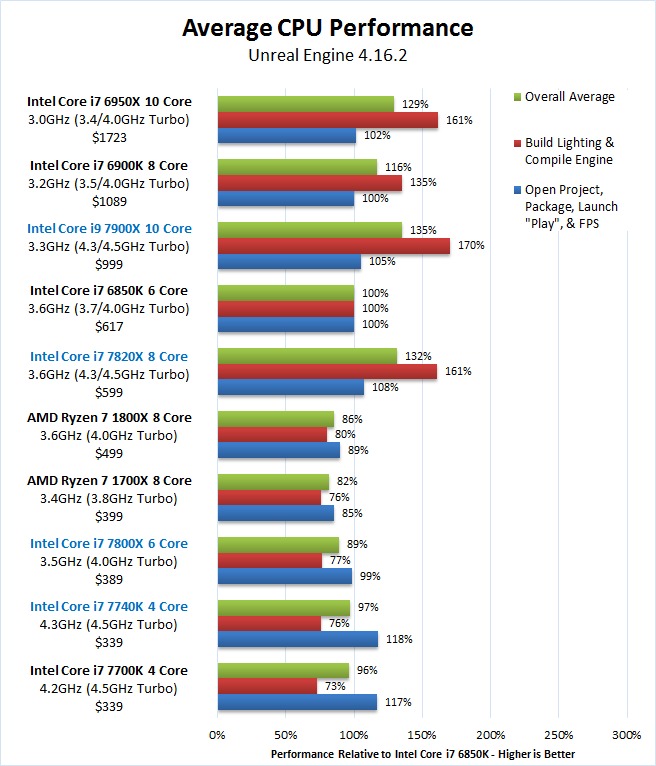 To help you decide which CPU you should use, we first normalized our results to the Intel Core i7 6850K which has typically been a great mid-range CPU for game developers. After that, we separated our results into three categories:

Starting with the lightly threaded tasks, it is no surprise that the Core i7 7740X and Core i7 7700K were the top performers. While these CPUs only have four cores, they excel at tasks where it is more important to have faster cores rather than having more cores. The new Core i9 7900X and Core i7 7820X were the next best CPUs coming in at about 10-13% slower than the quad core CPUs.

Overall, if there was only one CPU we could recommend to Unreal Editor users it would be the Core i7 7820X. It may not be the absolute fastest for any single task, but it is a great balance for anything you might do. If you spend a significant amount of time building lighting or compiling, the Core i9 7900X would also be an excellent choice if you have a bit larger of a budget. On the other hand, if you rarely build lighting or compile the engine from source, either the Core i7 7740X or Core i7 7700K are terrific at most other Unreal Editor tasks while also costing significantly less.