Skip to content
This is the first in a series of blog posts about Home Theater Computers (aka HTPCs). It's really neat to see how people approach their home theater experience differently, so several of us were asked to write about our setup, what we chose, and why we chose it.
I've always been a proponent of using computers and technology to make our lives easier and more enjoyable, and one place I’ve focused on implementing that idea has been in relation to entertainment. I remember watching DVDs and listening to music on my computer as early as the mid 90s, and by the late 90s I had a TV tuner in my computer. I’ve owned several brands and models of tuners since then, but I didn’t make that type of functionality the focus of a dedicated computer until I got married. 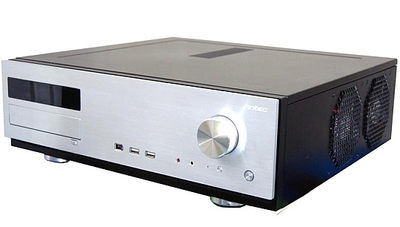 Up until my wife and I got our first apartment I had always lived with others who made the decisions about internet and TV service, but now I had some choices to make. I didn’t want to get a dedicated TV, and the one my wife had from her dorm was pretty small. As such I decided to continue using my computer, which had a large 21” CRT for a monitor at the time. We signed up for cable, and I used a small, simple application that had come with the TV tuner I had at the time; a MSI TV @nywhere Master.

It worked well enough, but digital cable was becoming all the rage and I wanted to try it out. I talked with the local cable company in our town and got them to bring me a Firewire-enabled cable box, and I was able to get digital cable onto the computer… but the moment the channel was changed on the set-top-box the software on my computer would crash. It is needless to say that wasn’t going to fly with my wife, so we scrapped it and went back to the normal tuner.

Over the years I continued to upgrade our computer, moving to Windows XP Media Center Edition when it became available. I fell in love with the Media Center interface, and having the software built into the operating system made things much simpler and more streamlined for non-techies (like my wife) to use. Eventually I built a dedicated box for home-theater usage, and while I’ve tinkered with it and done some upgrades since it has largely been the same for over three years. I’ve moved from XP to Vista and now Windows 7 as each new OS from Microsoft has become available, and I’m pleased to say that each iteration has brought new functionality to the Media Center interface.

Hardware-wise my HTPC consists of a dual-core AMD Athlon 64 X2 processor, 3GB of RAM, a GeForce 7600GS, two DVD-RW drives, a 500GB Seagate primary hard drive, and a 1.5TB WD secondary drive – all situated in an Antec NSK2400 chassis (the ancestor of the NSK2480 and Fusion line of HTPC cases from Antec) and connected to a 28” Hannspree HDTV. The main drive houses my operating system, applications, and TV recordings. I've moved all of the Windows-created document folders (Documents, Music, Pictures, Downloads, etc) to the second drive, making it the repository for all of my data and media files. I like having my important files on a dedicated drive like that, as it can help make things easier when it is time to upgrade to a new operating system and it makes backing up a little easier to configure. It also means I can share the one drive over my network without needing to worry about allowing accidental access to system files needed to run the computer.

Modern TV tuners can do a lot: over-the-air digital broadcasts, unencrypted digital cable, and more. Honestly, though, for my own HTPC I’ve decided for now to just stick with analog cable. It is cheap when tacked onto our cable internet service, and gets us the major networks, local news channels, and things like PBS Kids for our children. It also ‘just works’ without the need for an external tuner box, roof-top antenna, or any worries about which channels are broadcast without encryption. For my purposes I’ve been using a Hauppauge PVR-500, which is an older dual tuner: I can record or view two shows at once, which has been very nice in helping to avoid conflicts of interest at home. 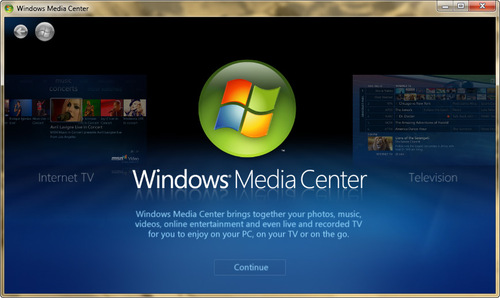 In addition to traditional cable TV we also have access to Netflix, Hulu (via the Hulu Desktop application and a link to it from within Media Center), other online services like YouTube and network TV websites (through a web browser plug-in for Media Center), and our local media collection. That includes copies of all our audio CDs, a few songs we’ve purchased from Amazon.com, and now – thanks to recent changes to the DMCA – a growing subset of our DVD collection. That in particular has been a great feature for my wife, as she can now start a movie up for the kids without having to manually dig through our drawers of DVDs. I’ve only added kid-friendly movies so far, but I’ll keep loading more as the kids grow up, letting me control what they have easy access to once they learn to use the remote.

While the main purpose of our HTPC is media viewing in the living room of our apartment, it serves some other roles as well. We can stream the media stored on that system to our other computers – my desktop or our laptops – and I have it set up to stream our music collection to my computer here at work as well (via the remote streaming feature in Windows Media Player). It also houses our pictures and other documents, since it is on 24-7 it makes access to those files very easy. For backup purposes there is an external hard drive connected to the system, and all of our media and data files are synchronized with it nightly.

In the future I would like to eventually move to a digital TV tuner, but I’m waiting to see how the recently-released Ceton CableCard tuners work out first. If those end up being successful I may go in that direction; if not then I’ll try over-the-air again next time my family moves (our last four apartments have all had horrible reception via antenna). Of course it may be that eventually we can drop traditional TV service entirely and go exclusively online… only time will tell. Whatever the source for entertainment becomes, though, I don’t see my desire for a dedicated media center system going away any time soon.