It wasn’t long ago that Solid State Drives (SSD) were considered a luxury item, reserved for those who demanded drive speeds only SSDs can deliver. The first generation of SSDs were not only limited in capacity (40 and 60 GB models were popular) but were very expensive, often costing more than $500. That makes for a difficult sell when a mechanical drive could be had for about half the the price and nearly 10x the capacity.

Starting in the first quarter of 2011, companies such as Intel, Corsair, Samsung and other began dropping prices on their SSDs. At Puget Systems we’ve found Intel to build a reliable and fast SSD at a reasonable price and have consolidated our offerings around their main lines.

A number of changes to how our customers consumer media have also accelerated the adoption of the SSD including streaming services such as Netflix and Spotify as well as cloud based storage services like Dropbox and Google Drive.  These and other similar services help reduce the amount of storage capacity many PC users require.

While SSD prices were coming down and capacities were increasing, floods in Thailand caused mechanical drive shortages around the globe. Speculators saw an opportunity and swooped up massive inventories of existing drives which drove prices through the ceiling. Drive prices and availability didn’t fully recover until the latter half of 2012. Although this was unwelcome news for our industry, it opened the door for many customers to consider an SSD who may not have before. 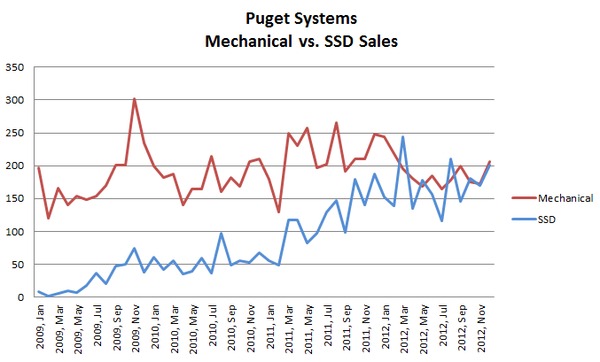 Sometime a small opening is all a technology needs to break out and succeed within the mainstream community, and that’s what we are seeing today as SSDs begin to overtake mechanical drives in total sales at Puget Systems.  SSDs run cool, take up less physical space, and make no noise which explains their popularity in laptops, but those advantages also translate well to desktop and workstations.

We’ve found that once customers experience the overall increase in system performance that an SSD provides they can’t imagine returning to a mechanical drive. The Intel 240 GB models hit that sweet spot in terms of price and capacity today, which is often enough as the only drive needed for a new system.

Mechanical drives still fill a need for those needing a terabyte or more of storage capacity, and I’m certain we’ll continue to offer them in the computers we build for many years to come.

But there’s a changing of the guard taking place in storage, and that’s a good development for our customers.