When it comes to building a custom PC, one of the most important selections is the graphics card. What used to be viewed as a distinction, often limited to gaming systems is now a vital part of many computers ranging from post-production workstations to trading PCs requiring support for 8+ monitors.

Since the number of choices for graphics cards can be overwhelming, we cull through many brands and models until we find those which meet our performance and reliability standards. Only then do we offer specific brands and models for placement in a computer crafted by Puget Systems.

Although there are a few specialty manufacturers, the two dominant companies in this market today are NVIDIA and AMD. Both companies offer an array of cards are various price points. They also build both mainstream and professional grade cards. NVIDIA produces the GeForce and Quadro while AMD makes the Radeon and FirePro cards.  It’s not uncommon for both companies to leapfrog each other in terms of performance with each new generation.

Out of curiosity, I went back through our sales data for the past three years to determine which brand has been the most popular with our customers. The first graph below shows NVIDIA with a substantial margin in popularity and growing! 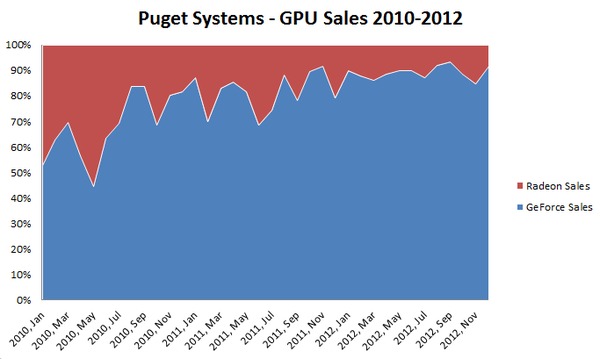 I also wanted to determine the most popular models of 2012 which is shown in the graph below. I included onboard video as a reference and to show how popular it has become. Because NVIDIA released a new series of cards across their product line, I combined models where it made most sense. For example, the GeForce GTX 580 was replaced earlier in the year with the GeForce GTX 680.

I found it interesting the GeForce GTX 660/560 has been the most popular series of cards which reflects the favorable price/performance ratio many reviewers and our benchmarks have acknowledged.  The high-end GeForce GTX 680/580 models are also popular with our customers, and the fact that are often purchased in pairs for those who play the most demanding games in SLI, helps drive their sales past a number of less expensive cards. The AMD equivalent to the 680 is the Radeon 7970, but it hasn’t sold well enough to make the list, although its less powerful siblings, the 7950 and 7750 did.

But as you can see, NVIDIA’s GeForce models hold the top six spots in terms of sales, and it’s difficult to see that trend changing anytime soon. 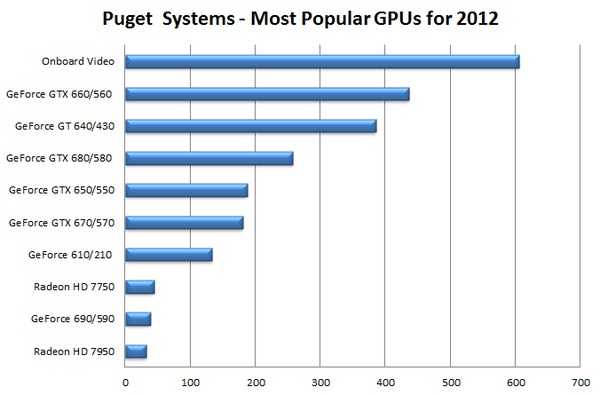