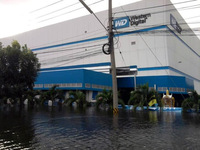 Widespread flooding in Thailand is affecting millions of people there, and has shut down many thousands of factories. In the computer industry, this is creating a severe hard drive shortage. Some manufacturers (such as Western Digital) are directly affected, with plants in Thailand that are shut down. In addition, many hard drive component suppliers are also impacted by the flooding, extending the reach of this shortage to all hard drive manufacturers.

In the short term, pricing has risen sharply in anticipation of constrained supply. Speculators have bought up huge portions of inventory, leading to early shortages. As the pricing stabilizes, these speculators are liquidating their inventory, meeting demand for the moment. Eventually, this supply will run thin, and as we approach the end of the year, major shortages are expected. By late January or February, plants are expected to begin to come back online, but it won't be until the end of 2012 before the industry fully recovers.

How Puget Systems is Responding

First of all, Puget Systems is using its extensive supplier network to be very strategic about our inventory. This is exactly the kind of scenario we had in mind when we purchased our building in Auburn, WA. The equity in that investment gives us the purchasing power to be aggressive in preparing for shortages. We have bought up many months worth of hard drive inventory, and our hope is that we will not even have to deal with a shortage of supply here!

However, if we do reach a shortage situation, we plan to offer two options:

This shortage really allows smaller system builders across the industry to shine. We are more nimble to respond, and have freedom to be creative in coming up with solutions! This is a difficult position for the entire industry, but Puget Systems is being very active in working to keep this shortage from impacting our customers!