Early this year, I decided to purchase and setup a trio of monitors for a triple monitor display. The setup itself was going to be used in a span configuration with a resolution of 5760 x 1080 on an ATI 5870 Eyefinity Edition video card with the goal of being able to see more while gaming. I thought I'd share my experiences, and what I learned may help you with your own monitor configuration.

First and foremost: patience is key. I am personally very meticulous when it comes to home projects, so I spent more time arranging my monitors the day I got them than actually using them. In fact by the time I was done all I did was turn them on and configure the span before going to bed. 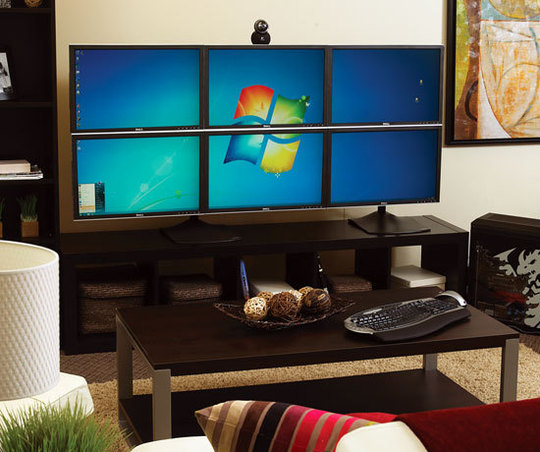 Depending on how the monitors will be arranged will ultimately depend on how easy it will be to setup. I recommend a corner desk or a desk large enough that it could alternately be used for Thanksgiving dinner. In other words the setup takes up a lot of space and would obviously vary depending on monitor sizes. I had about 70 inches of monitor space (bezel to bezel), which could double as a tanning salon for my face. Three monitors equals bright, so consider your lighting environment and your eyes when using certain programs or playing particular games.

Games, when properly supported, are absolutely stunning at 5760 x 1080. A game meant for spanning like Dirt 2 really makes it that much more fun! You get to see opponent cars drifting around the corner behind you, which lets you take advantage of the AI and force them to hit the brakes by sliding your vehicle in front of theirs. The Crysis mod 'Mechwarrior Living Legends' gives you an amazing 'true' cockpit view while piloting your favorite ‘mech. An FPS, like Bad Company 2, gave the slight upper hand by being able to move around and have a much larger field of view. I knifed Jon Bach and collected his tags by catching him running into a house at the corner of the span.

Unfortunately, this setup can also make your gaming experience… in a word… hell. What comes next are the let downs, the bum deals, and the “Why did this happen when I had an awesome score this round and there were only two minutes left!?” As nice as the setup can be the hassle can just make playing a game a job in itself. Games that say they are properly supported in a triple monitor span still have little bugs on top of their already existing bugs. My main problem was maxing out AA & AF. I tossed aside the Radeon 5870 and embraced the GTX 590 with Surround View only to find the same issues, even when turning down the AA and AF settings.


The monitor configuration also had it owns physical drawbacks. With 70 inches of monitor length at roughly four feet viewing distance, it’s hard to keep an eye on everything. There is a learning curve to the span and it’s mainly about using your peripheral vision to track things and expanding your focal point. Moving your head side to side all the time just makes you look silly and will possibly also make you dizzy. Take note that some games with critical HUD elements will not be at your focal point, but at the very corners of your span where even your peripheral vision can’t see. Looking away for a brief second may cause you to regret the action when you slam into a wall or lock bumpers with spawning oncoming traffic in Need For Speed: Hot Pursuit. Some games leave HUD items at the focal point, like Dirt 2.


Some games will just outright refuse to run with such a large resolution since it is not supported. Both ATI and nVidia handle this differently. ATI will duplicate the image on each monitor in use at a standard resolution or on just one while rendering black background on the other two, while nVidia will essentially turn off the other two monitors not in use and only use the main display. ATI can have a user created profile to map to a hotkey to switch from span to extend in a sense replicating what nVidia does at ease. If the game is an old one however the way it’s done on the nVidia side is to go into the control panel and disable your span and set up an extend. A much more involved task, especially if going between the two setups regularly. This made playing Mechwarrior 4: Mercenaries a little less exciting.

Though not everything is doom and gloom. Shift gears into productivity and it’s as if you now have the desktop space you only dreamed of. I do VHS to DVD converting at home and use several different programs to create the content I want. In addition to also having a web browser, e-mail, and a messenger service open at all times. Having the ability to move my programs around without minimizing the window and still working on all my tasks is quite convenient. You can use three or more monitors outside of a span, as all you need are three or more active outputs.

At this time I no longer have the three monitors in a span. I got fed up with the gaming portion, which was the main reason why I invested the time and money. It’s never a good feeling that you do not want to play a game because you're worried about having loads of fun and crashing to desktop before you get to finish a round or save a game.  Supported games are documented with both ATI and nVidia and have ratings based on the quality of the image when set as a span between three or more monitors. For example Dragon Age: Origins is a silver star because the game supports and runs a 5760 x 1080 resolution but only the center monitor has all the background environment rendered at all times and the image is clean while the other two monitors stretch the image and only render parts of the environment. You can also look up a video on youtube and see if someone has uploaded a video of what a particular game looks like set as a span with multiple monitors to get an idea of how the game is drawn amongst all the monitors.

If I were to do it again would I? No. I love to play a good video game inside-and-out and then do it over again, but even better. I fell away from that with a triple monitor span. If I had to do it again how would I approach it? The smallest 1920 x 1080 monitors paired with an ATI GPU. The cost of a 21.5 or 22 inch LCD monitor may not sit well knowing that a 23 or 24 inch model is not that far from reach, but your desk and eyes will thank you. Drivers might be a little troublesome at times with ATI than they are with nVidia, but I’d gladly trade the drivers and PhysX for profiles and hotkeys. If a larger resolution is really important to the you then I’d suggest going with a 30 inch LCD monitor with a larger native resolution. Even though it may be more expensive than three individual monitors it can save you from a couple of possible headaches.