Skip to content
The first computer I purchased arrived at my home with two operating systems: DOS and Windows 3.1. Most full-fledged programs ran in DOS, including nearly every game in the early 1990s. Besides pool, the game I played most during my college years was called Links Golf which ran in DOS. Without Links I’m convinced my GPA would be at least a half grade higher. I offset my Links addiction by installing WordPerfect for DOS which allowed me to write reports from home instead of the school’s computer lab. 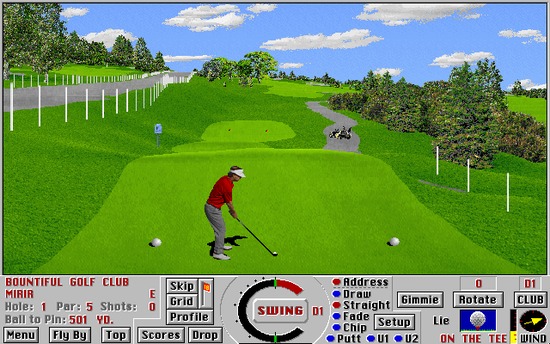 Links Golf: The wind is in play
This was a few years before Jay Leno would step on stage and crack awkward jokes with Bill Gates to kickoff the arrival of Windows 95. DOS faded into the background while nearly every program would be written for Windows. Microsoft had reached the pinnacle of its power, but we wouldn’t realize it for a few more years.
Most of my life I’ve run a version of Windows. Until Windows XP came along, my favorite version was Windows NT. It didn’t include USB support and searching for compatible drivers could take an afternoon. But if you could get NT working, it was solid, and seldom required a reboot. I ran Windows NT on my desktop at home for many years and happily traded support for many peripherals and games for an incredibly stable PC.
Over the past decade I’ve run various flavors of Linux, usually on older hardware that couldn’t handle Windows. Linux actually reminds me a lot of Windows NT in that it could be a challenge to install, and drivers could be finicky. But with patience, the payoff was worth the time investment because Linux tends to be very stable.
Fast forward to today where the most popular operating system in the world runs on phones (Android). Apple’s iOS runs on fewer devices but has won over developers with its popular and lucrative ecosystem. All the while, Microsoft has struggled to convince Windows 7 users to upgrade to Windows 8, while  Apple gives away OS X for free. The catch of course is you must first purchase Apple hardware, often at a premium.
Linux has made great strides towards usability on the desktop but is still seen by many as too difficult or just too different. Distros from Ubuntu and Mint are chipping away at these challenges, to the point where getting either running doesn't require the ability to write your own drivers. We offer Ubuntu on most of the custom PCs we build today, and have found it to be a reliable option for many customers.
Each day I use a combination of Windows 8, iOS, OS X (Mavericks) and Ubuntu. Each one has its share good and bad. If I could snap my fingers and create the perfect operation system here is what it would include:
1 The stability of Linux.
2. The polish of OS X.
3. The driver support of Windows.
4. The performance of Linux on older hardware.
5. The breadth of Windows programs.
6. The usability of OS X.
I don’t expect to find the perfect operating system, but would say Windows 7 has come the closest to OS nirvana. Microsoft tried to unify the desktop experience with that of Windows tablets and phones in Windows 8 with mixed results. Rumor has it that the next version of Windows will bring focus back to the desktop which is music to our ears at Puget Systems.
What has been your favorite operating system? If you could create the perfect one, what features would it include?
Tags: Linux, OS X, Windows