What Our Customers Have to Say About Windows 8 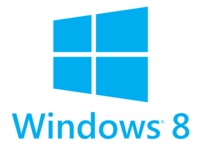 Windows 8 has been out for about a year and a half now, and it is common knowledge that Microsoft's newest operating system has received mixed reactions. The new start screen (I still have to stop myself from calling it Metro!) is a jolting departure from the user interface that Windows users have been accustomed to using since 1995.

The general progression of emotions we typically see when you first experience Windows 8 is:

The truth is, once you get to know Windows 8, using it REALLY ISN'T that bad -- what is bad is that you have to go through the other 4 negative stages first. On the other hand, once you get to the point of acceptance, is it really because the operating system is improved from the past, or is it just that you have come to the conclusion that accepting it is easier than fighting it? Is it Stockholm Syndrome??

I read a great article by Paul Lilly at MaximumPC recently, which summed up the thoughts shared by a Microsoft designer in a Reddit thread. In this thread, the designer shared that Microsoft's intentions with Windows 8 was to go after mobile devices, and make the user interface friendly towards novice users. The start screen was pushed so heavily, he said, because if they didn't do that, the novice users would never find it and adopt it. Finally! It was a strategy I could understand, even if I didn't agree with it. The fatal flaw in their plan was that this new focus was also forced on the power users. Microsoft showed how out of touch they were with power users when they described them as "people who run multiple virtual machines." Sure, many power users run virtual machines, but there is a HUGE spectrum of people that fall in the middle, who know enough about how to get around the Windows OS that the new user interface was extremely frustrating. Microsoft made some much needed improvements in their Windows 8.1 update, giving users the ability to customize the OS to act more they way they want...but it was too little too late. Where Microsoft ultimately went wrong is that they underestimated how much effect "power users" can have on general public perception. These users are the influencers and evangelists of technology. Their friends and family listen to what they have to say…and what they had to say about Windows 8 was filled with four letter words! Second, Microsoft underestimated just how much these "novice users" are intimidated by change. They took something familiar, and turned everything upside down! Third, Microsoft got sloppy in trying to pursue the masses at all costs. These were users they didn't understand, and they were willing to jeopardize their existing customer base in order to go after it. They ended up with a confusing two-faced operating system that was not appealing to either camp. 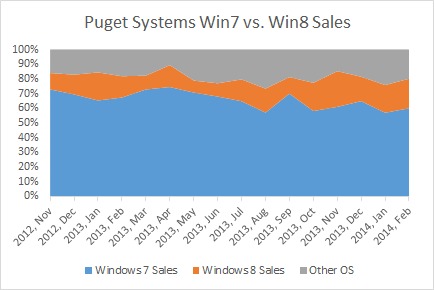 At Puget Systems, we work with "power users" each and every day. It is no surprise then, to see that the adoption of Windows 8 from our customers is very weak. With the Windows 8.1 update, we are seeing a very slow increase in adoption, but even still the rate is worse than we saw back in the day with Windows Vista!  In most areas, we still actively advise our customers to use Windows 7. In other areas, we recommend Windows 8. For example, our laptops have much more mature drivers for Windows 8. Our laptop manufacturer (Clevo) thinks of Windows 7 as a "legacy OS" and only provides the bare minimum effort towards releasing Windows 7 drivers. As such, there are more bugs yet to be worked out in Windows 7, so we actively recommend Windows 8.

One unique thing we do here at Puget Systems, is we reach out to nearly all of our customers after they have had a chance to use their new PC. We ask them how it is working for them, and what we could have done better. We learn a LOT. Is anyone surprised when I say that the biggest complaint we get about our PCs is the Windows 8 operating system? We average a complaint per day…ouch! Sure, Windows 8 may not be "our fault" but it is directly tied to our customer experience, and that isn't good! Here is a sampling of Windows 8 feedback we received from our own customers in just the last few weeks:

"I want to run Windows 7 generic, unless you convince me to go with a higher 7. It will not be Windows 8."
"Words can't even describe how happy I am with the system I bought from you guys. I have yet to have any kind of issue technically so I can't really give you any suggestions other than to do what your doing, it works. The only issues I have had are on the software side, and mainly due to my poor knowledge of windows 8, nothing to do with the system at all, and easily fixed once I learned the OS a little better."
"Sorry it took a while to reply. The new machine is running fine. No complaints. But, Windows 8 (now 8.1) is a whole other issue. Running it in the legacy desktop mode is usually bearable, but anytime it reverts to the new tiled interface ... I just pull my hair out. I wish I had the time and patience to downgrade to Windows 7."
"Sure is a quiet box! How are you folks doing? ... arrghhh Win8 is terrible! Such a clumsy install and user feel to it."
"I recently had to wipe my computer and reinstall everything, so it is essentially out of the box new. (My fiancee accidentally installed Windows 8.1 and ruined the computer; had to reinstall clean)."
"I'm glad I was able to buy a machine with Win 7 instead of 8."
"I am thrilled with speed and silence, and zero tech glitches so far. I am ~SO~ glad he convinced me to follow him to your systems! I love the small footprint! I’m still exploring all the speed, but the silence is wonderful. A little bit of getting used to the Win7 -- from XP -- but that’s expected, and I’m glad to not be dealing with Windows 8 just yet. All in all? It’s small, it’s quiet, and it Just Works -- right out of the box. Who could ask for more?? Thanks you so much"
"This computer is performing just as I had hoped. It meets all my expectations and the purposes for which it was designed. My one concern is about updating to Windows 8. The system that I purchased is working perfectly."
"Can I still down grade the OS to win 7. My wife hates win8...."
"I despise this 8.1 operating system, I can' t figure how to do simple things."
"I'm not happy with WIN8 anyway and want to go back to WIN7."

Wow! What are we going to do about this? Customer education continues to be our primary tool. We have conversations about Windows 8 as part of the pre-sales process every hour of every day. But there is a problem -- remember how I talked about our laptops having better, more mature Windows 8 drivers? I believe this trend will continue. Windows 8 DOES have some really nice technology improvements built in, and hardware manufacturers can get more mileage and features out of their hardware with Windows 8. Windows 7 has already hit its peak support from hardware manufacturers, and it will be downhill from here. 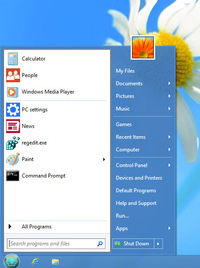 With that reality in hand, we need to be able to offer Windows 8 and help our customers avoid the pain points. I am excited to announce a new free service we just launched, optional with all our Windows 8 PCs -- a Windows 8 makeover to look and act more like Windows 7. This idea was born out of our article How to Make Windows 8.1 Act More Like Windows 7, which is actually one of the most popular articles we've ever written (which tells you a lot right there!). With some new options provided in Windows 8.1, the use of a few 3rd party utilities, and a few dozen other modifications, we are able to provide a Windows 8 PC that looks and behaves much more like Windows 7. We feel that with these changes, we can do our customers the service of skipping the emotional stages #1-4 I talked about above, and let them skip straight to #5. Windows 8 really is a nice operating system, once you get past all the terrible user interface decisions that Microsoft has made. After so many months of hearing what people REALLY want, we're excited to be able to provide it.

The official name and link for this new service is: Windows 8 Makeover: Emulate Windows 7

What do you think? What was your first reaction to Windows 8? If the start screen wasn't forced on you, would you have had a different first impression of Windows 8? How would that alter how you feel about it today?
Tags: Windows 8, Windows 7, Metro, Start Screen