By now, most folks have seen Apple’s updated Mac Pro – or as I like to call it, the trash can. Before any Apple fans out there get too concerned or close the page, this is just a visual comparison.

I am not saying the Mac Pro is a trash can (or trash). It has some decent hardware inside, but I do find that the limitations on the hardware imposed by its size and form factor are unfortunate. The Mac Pro used to be a powerful, dual-CPU rig with room for lots of drives and expansion cards… but the new iteration has put form over function, and that has a lot of people looking at PCs instead when they need a high performance workstation.
Because of that, we are getting a lot of questions about how our Genesis workstation line stacks up against the Mac Pro. I wanted to make an overview of the differences, for people who may be on the fence about what to get or simply curious about what the options are outside of Apple’s walled garden.
Here is a run-down of the specs on the Mac Pro, as of early 2014:
4 – 12 core Intel Xeon E5 processor
12 – 64GB of ECC memory
256GB – 1TB solid-state drive
Dual D300 – D700 AMD FirePro video cards
And that is pretty much it, all wrapped up in a small, round, black package. What is great about it? Well, small size is certainly nice. They are using great Intel processors, and taking advantage of the Xeon line’s support for error correcting memory. The solid-state drive is also excellent, and a bit faster than most available for PCs due to the form factor they use (it isn’t a standard SATA drive). Dual video cards also give a lot of potential 3D graphics performance, and are sometimes used for other sorts of processing in modern applications.
However, there are just as many things which are unfortunate about this design:
On that last point, Apple seems to be making a big push toward using external drives for storage. They do provide several USB 3.0 and Thunderbolt ports on the Mac Pro, so the connections are there, but every external drive you add means more desk space used up and more wiring cluttering your workspace. They do have the market nearly cornered on offering Thunderbolt currently, though that is expected to change – just like Firewire was on Macs first, but eventually an option on PCs as well – and for external platter drives USB 3.0 is more than fast enough anyway. 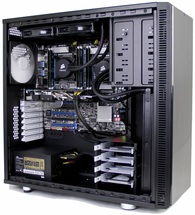 By comparison, our Genesis workstations offer a lot more flexibility. The Genesis I houses a single CPU, much like the Mac Pro, and then we have our Genesis II for dual processor builds. That means we can pack up to twice the raw x86 processing power of a Mac Pro.
When it comes to memory, the Genesis I supports up to 64GB like the Mac Pro – but the Genesis II can quadruple that to 256GB. If you have big applications and files that are memory intensive this could be a huge advantage.
For graphics, both versions of the Genesis offer single and dual video card configurations. AMD and NVIDIA cards are equally represented, with both mainstream (Radeon / GeForce) and professional grade (FirePro / Quadro) models available. And many of those pro-grade cards have true ECC video memory, unlike the FirePro options on the Mac Pro.
As for storage, our Genesis systems knock things out of the park. We have solid-state drives ranging from 128GB up to 1TB, but we can fit more than one in a system. If you want high-performance SSDs for your OS as well as for editing files, we can do that! We also have platter drives up to 4TB each, and room to fit several inside the chassis – so no need to resort to external drives. If you want larger or faster drive arrays, we can customize further by adding a RAID controller to give even more storage options.
Now Apple does use a fast connection for its solitary SSD, which removes the bottleneck that SATA 6Gbps can be. This lets their SSD reach speeds higher than any single SATA-connected SSD could on a PC… but it isn't really a big factor for performance anyway, since all high-quality SSDs perform quite well these days. If you really do need particularly high speeds, though, the motherboards in our Genesis workstations allow you to pair two SATA drives in RAID 0. That isn't something we recommend for everyone, but it does boost read and write speeds to nearly double what a single SATA 6Gbps SSD can reach – and in the process surpasses the performance of the Mac Pro's SSD!
Oh, and did I mentioned that if you make comparisons with similar internal specs our Genesis systems come out costing less than the Mac Pro too? Well, they do! You have to be a little careful comparing video card prices, though, since as I mentioned the FirePro cards Apple uses have no direct analog on the PC side. I find that comparing to the new Radeon R7 and R9 series cards is the most fair if you want equivalent performance levels and similar technology / feature sets.
Tags: Apple, Can, Comparison, Genesis, Mac, PC, Pro, Trash, Workstation